The skill of being a true craftsman is something to admire.

While I have a lot of fun cooking over fire, writing recipes and doing social media, my friend Jared Thatcher of Boothill Blades has mastered the art of crafting blades. He is a pro. Someone that people wait years to get a custom blade from. It was natural that we hung out together for this series.

I met Jared over at his farm where he tends to his livestock while making blades out of his garage (crazy!). The minute I got there he had me forging a blade using a hammer and his anvil. I actually got the swing of things after a while! We then walked through the heat treating process all the way to him showing off his custom blade he made out of Buffalo Trace barrel staves!

I was inspired to say the least…

After we worked on some blades, I told him that I was itching to cook! We pulled out some Porter Road NY Strips and seasoned them in my Chipotle Garlic Rub. Made a bed of coals out of some local wood, and we roasted the steaks right on top of the hot embers till they were perfect.

In fact, the whole meal was cooked right on the coals. I made some of my flat bread with arugula, blistered tomatoes and cheese. We even threw some sweet potatoes into the coals to roast for over an hour.

Finally, we sliced into the steaks using his newly forged Buffalo Trace barrel stave knife. Poured ourselves a glass of Buffalo and called it a night. It was an honor to cook for an amazing craftsmen. 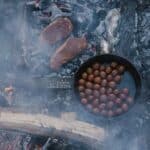 NY Strip steaks cooked right on the coals with my Chipotle Garlic Rub and butter.

Want to see all the episodes? Find them right here:

Connect with me on social: