Who doesn’t love a good tenderloin?! This Bison Tenderloin with Cognac Cream Sauce recipe hits all the right spots. Tender is an understatement here, more like melt in your mouth deliciousness! Plus, that cream sauce was the cherry on top of it all! If you haven’t had bison before, this is the recipe to try!

Let’s start with the bison tenderloin filets. First, you’ll want to tie a food grade string around the outside of the filet. It might look silly, but trust me it has a purpose. That purpose is to help the filets hold their shape. Without the string the filets will lose their shape as they cook, causing them to cook unevenly. We obviously don’t want that for our Bison Tenderloins with Cognac Cream Sauce, so just tie them up!

I covered each bison tenderloin filet in salt after I finished tying them. This wasn’t just any regular salt though. This was Matt Broussard’s new Flaky Salt from Spiceology. Matt is a good friend of mine and is an amazing cook. I was pumped for his new salt line and knew it was all I’d need for this Bison Tenderloin with Cognac Cream Sauce recipe! I sprinkled each side and the width of each filet with this salt. Then, place the filets in the fridge. 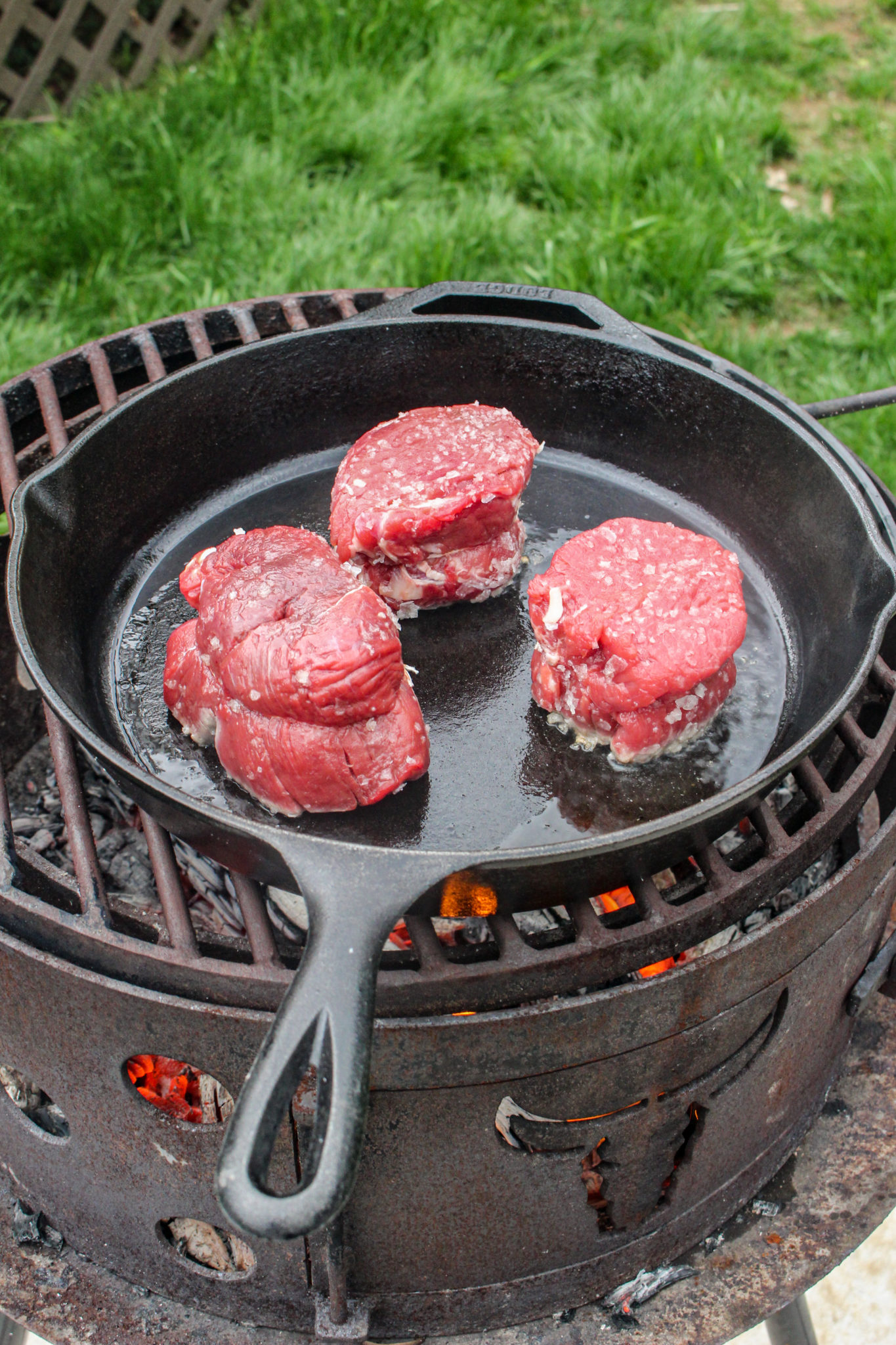 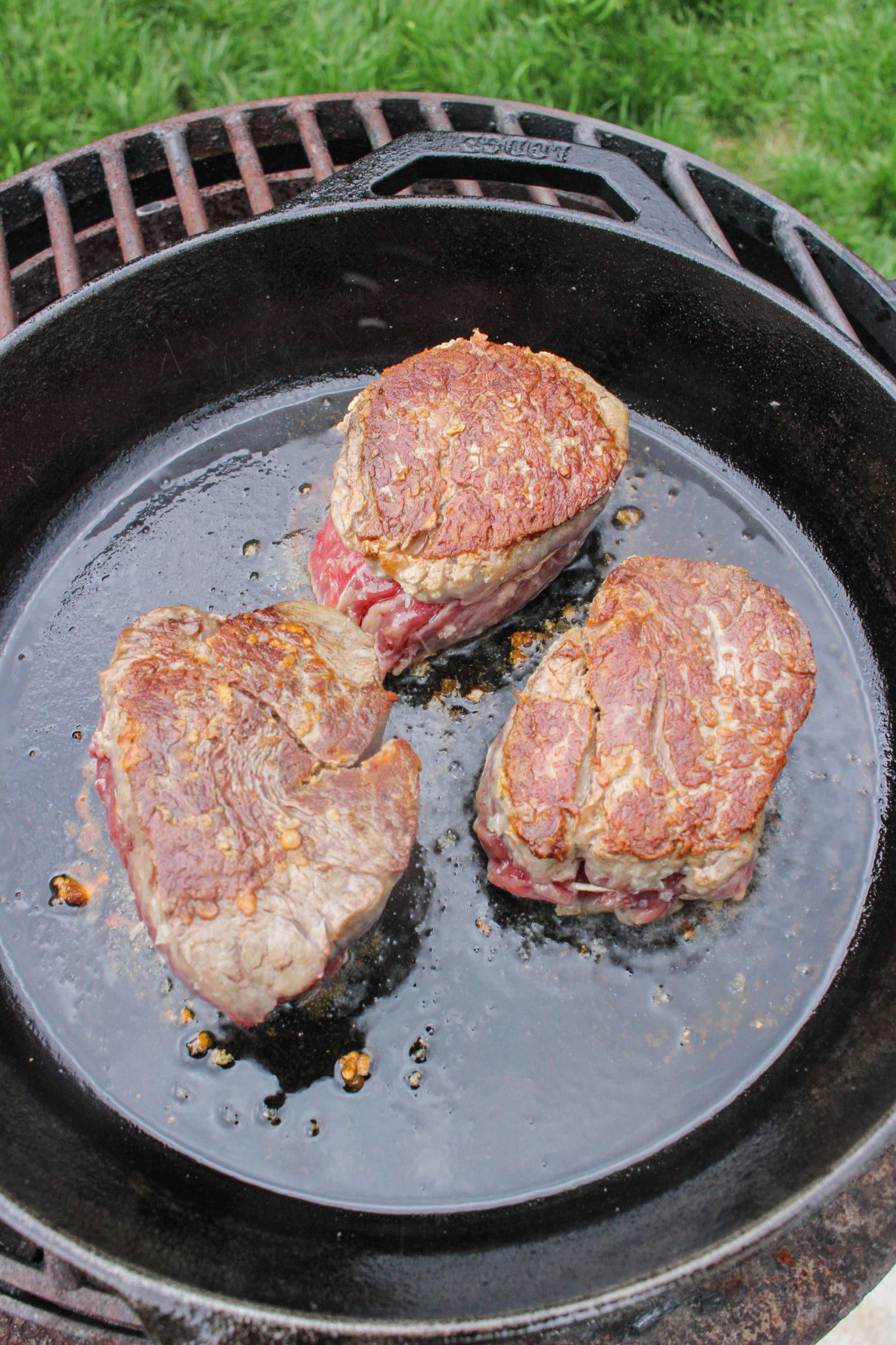 It’s fire time! Light up a few logs and wait until they begin to coal up. Then, place a large cast iron skillet on top of the grill. I used a larger skillet to cook in this go round because after the bison is finished cooking we’ll use the same skillet for the Cognac Cream Sauce. Let the skillet preheat for a minute and then drizzle it with some oil. Grab the bison from the fridge and place each filet in the skillet. Press each filet down on the skillet to ensure even surface coverage and let them cook from here for about 90 seconds per side.

Toss the butter, garlic and rosemary into the skillet once each side of the bison has been seared. Let the butter melt before basting each bison tenderloin. To baste the filets, you’ll want to tilt the skillet back towards yourself. This moves all the melted butter to the side of the pan that’s closest to you. Then, use a spoon to scoop up some of the butter and toss it up on top of the bison. Finish cooking until the bison reaches an internal temperature of 140 degrees fahrenheit, continuing to baste it on occasion.

Pull the bison tenderloin from the cast iron skillet to rest once it’s reached temperature. From here, you’ll need to deglaze the pan so that we can use it for the Cognac Cream Sauce. First, remove any access butter. Then, pour in some cognac and scrape away anything left behind from the filets. Add in the garlic paste, mushrooms, worcheshire sauce and light cream. Stir this mixture together until it thickens to a cream sauce. Make sure to KEEP STIRRING throughout this process. If you don’t the cream will either burn or curdle.

Grab those bison tenderloin filets and slice into each one. Top it with the Cognac Cream Sauce and boom! Some delicious bison tenderloin with a cognac cream sauce. Best enjoyed with friends and family. Cheers! 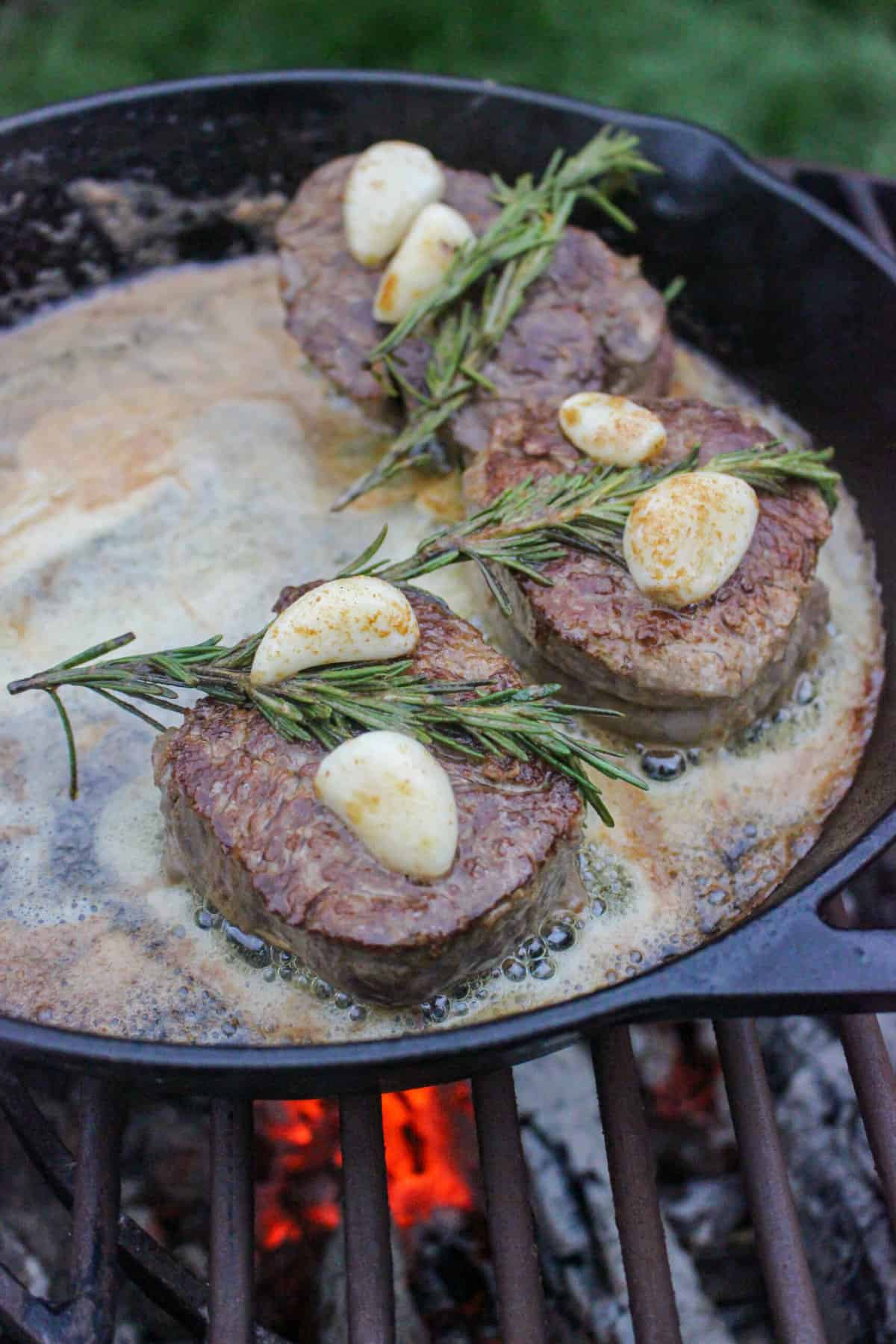