Traditionally called picanha in Brazil and other Latin American countries, this prized cut of meat holds amble amounts of flavor & has a texture similar to sirloin. If you are like me, then you probably were stunned the first time you heard about this cut of beef.

I love cooking over fire with unique cuts of meat. If you have been follow my journey for a while, then you are bound to have seen me talk about picanha. I have received so many questions about this cut that I decided to compile them into a list below! Hopefully I can answer everything you would like to know about this delicious cut of meat. 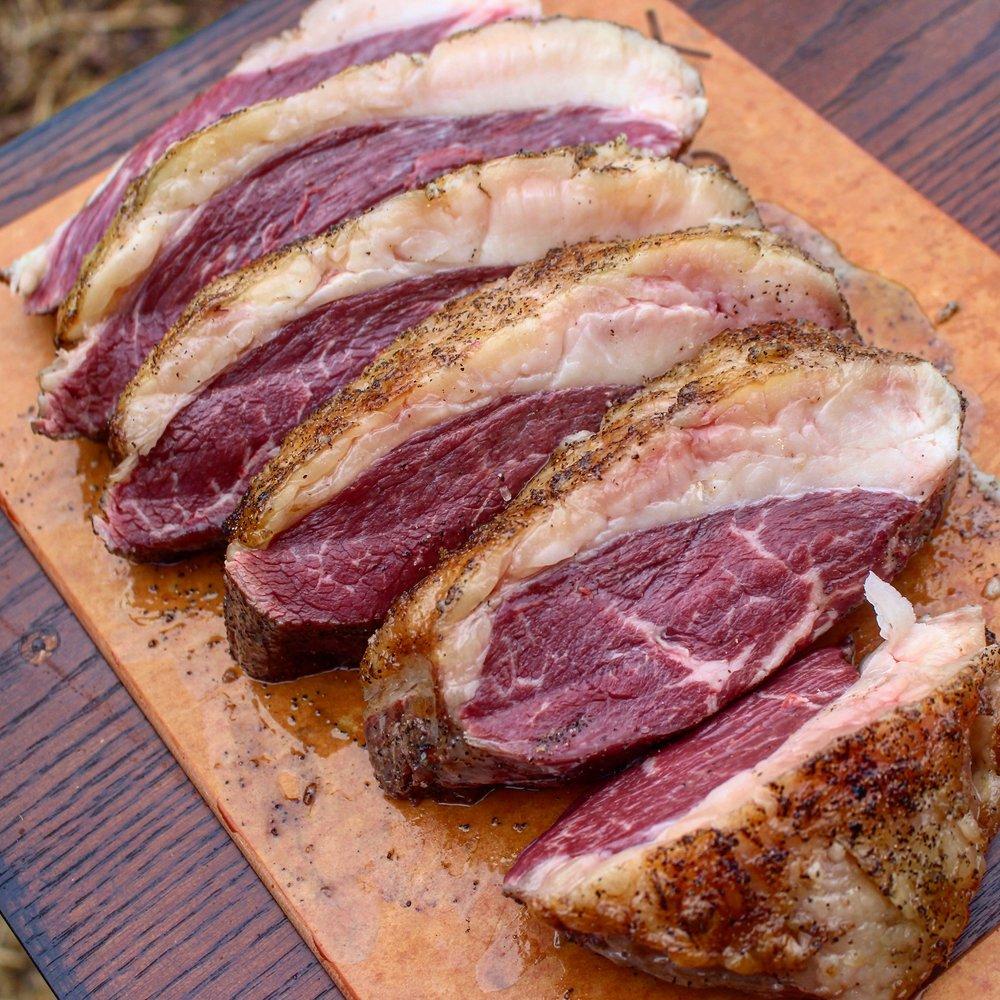 1. What part of the animal is it from?

The picanha cut is from the back side of the animal above the butt, where it sits on a fat cap. Most US butchers would call this area the round.

2. Is it called something else in the United States?

Yes, picanha is called Sirloin Cap or Rump Cap in the USA. Popular in Brazile, US butchers actually break picanha down into to other cuts like rump, round, loin, top sirloin cap rump. They sacrifice the highly prized fat cap in the process. Therefore, picanha can be hard to find in the USA.

The taste of picanha is that of sirloin. Tender and juicy with a lot of flavor. It holds very little fat inside the meat therefore you must cook it perfectly in order to not make it tough.

You can definitely eat the fat cap. Most Latin American countries keep the fat top sirloin cap on for added flavor! For those that do not like to eat the fat, then you are welcome to cut it off and enjoy the meat.

If you are using a whole picanha cut, then you first will sear the meat fat side down for 3-4 minutes. Once the fat is seared, you will then pull it off the grill & slice against the grain in order to make sirloin cuts (shown above). Place the sirloin cuts back on the grill and cook as you would normally cook a steak. Traditionally, you would cut the meat with the fat still on. You can try my grilled picanha, smoked picanha, or on the rotisserie.

6. Where can I buy this cut of meat in the United States?

I highly recommend finding a local butcher shop that does full animal break down in order to get this cut that is familiar with the popular cuts from brazilian steakhouses. These butchers should understand what you mean if you want to get sirloin cap with the fat cap still on!

7. Can you buy picanha online?

Yes, the guys at PorterRoad.com have fantastic picanha for sale and can ship to any location inside the 48 continuous states! You only have to make sure that it is in stock as if sells out quickly. Click here to see more.

Picanha is such a delicious cut of beef that is enjoyed around the world. Try some of my recipes for it above and make sure to check out the rest of my blog where I answer fun fire cooking questions like how to cook on the coals or how to hang a chicken!