It is official! I am so excited to announce that I am an ambassador for Oklahoma Joe’s Smokers. Having been a huge fan of their products for a long time, I had to kick things off with an awesome cook. That is why we made these Chipotle Espresso Crusted Ribeyes with Coal Roasted Loaded Potatoes on the Oklahoma Joe’s Judge Charcoal Grill.

We kicked off this new ambassadorship with an awesome ribeye steak coated in a homemade Chipotle Espresso rub. This rub is so delicious because it is sweet & savory at the same time, but still gives you a great crust of grill marks.

When you are cooking on the Judge Charcoal Grill, you get to use cast iron grill grates. These make it so easy to get good grill marks on these Chipotle Espresso Crusted Ribeyes. 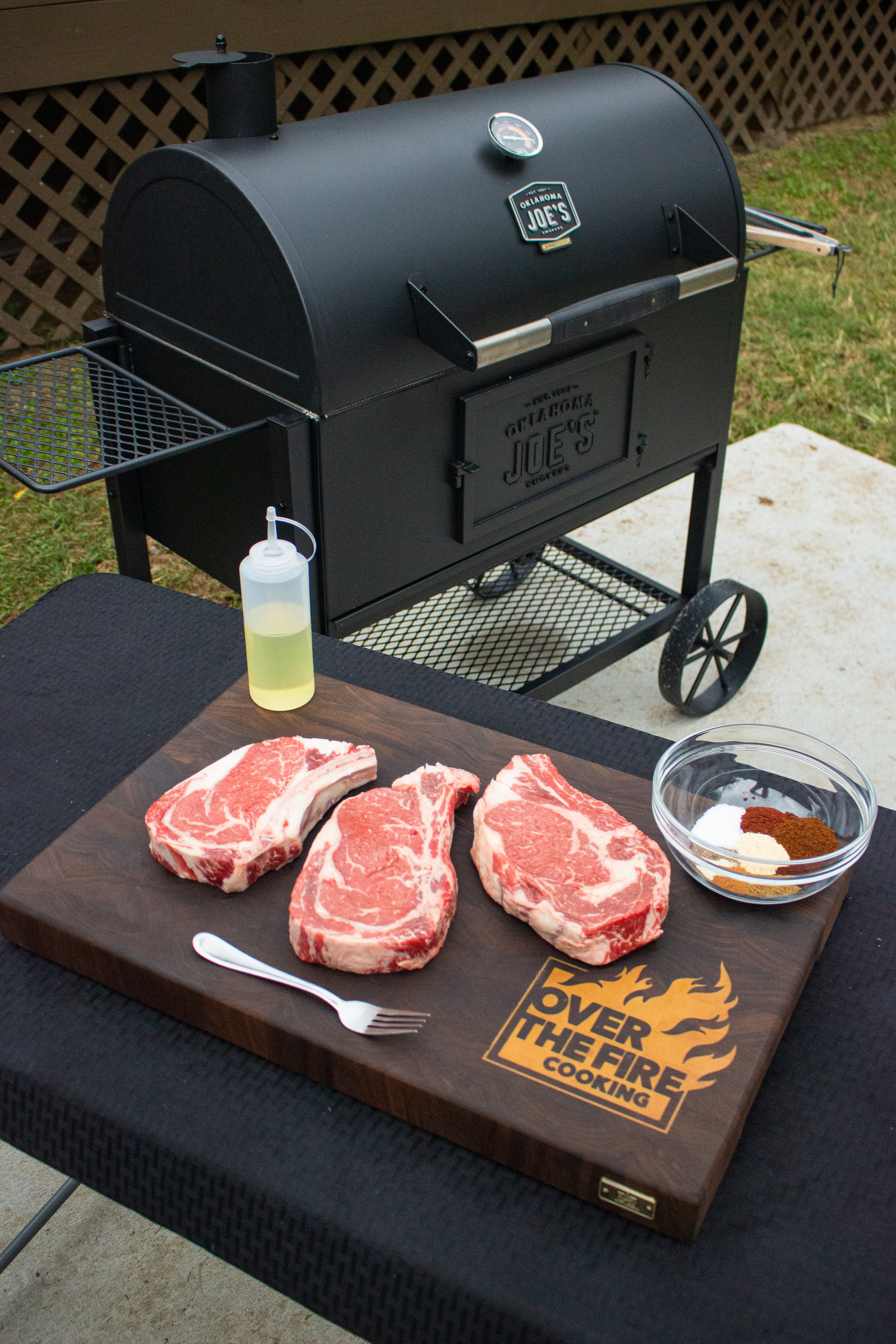 For those that are not grill mark fans, then add a cast iron skillet to your Judge and sear them off in that. This rub makes a good crust because the ground espresso and cinnamon caramelize so easily.

I try to avoid using sugar in my homemade steak rubs, but the downside of not using sugar is not getting good caramelization. The cinnamon and ground espresso help to darken the rub and give a great caramelization on the outside. Now let’s get on to those Coal Roasted Loaded Potatoes. 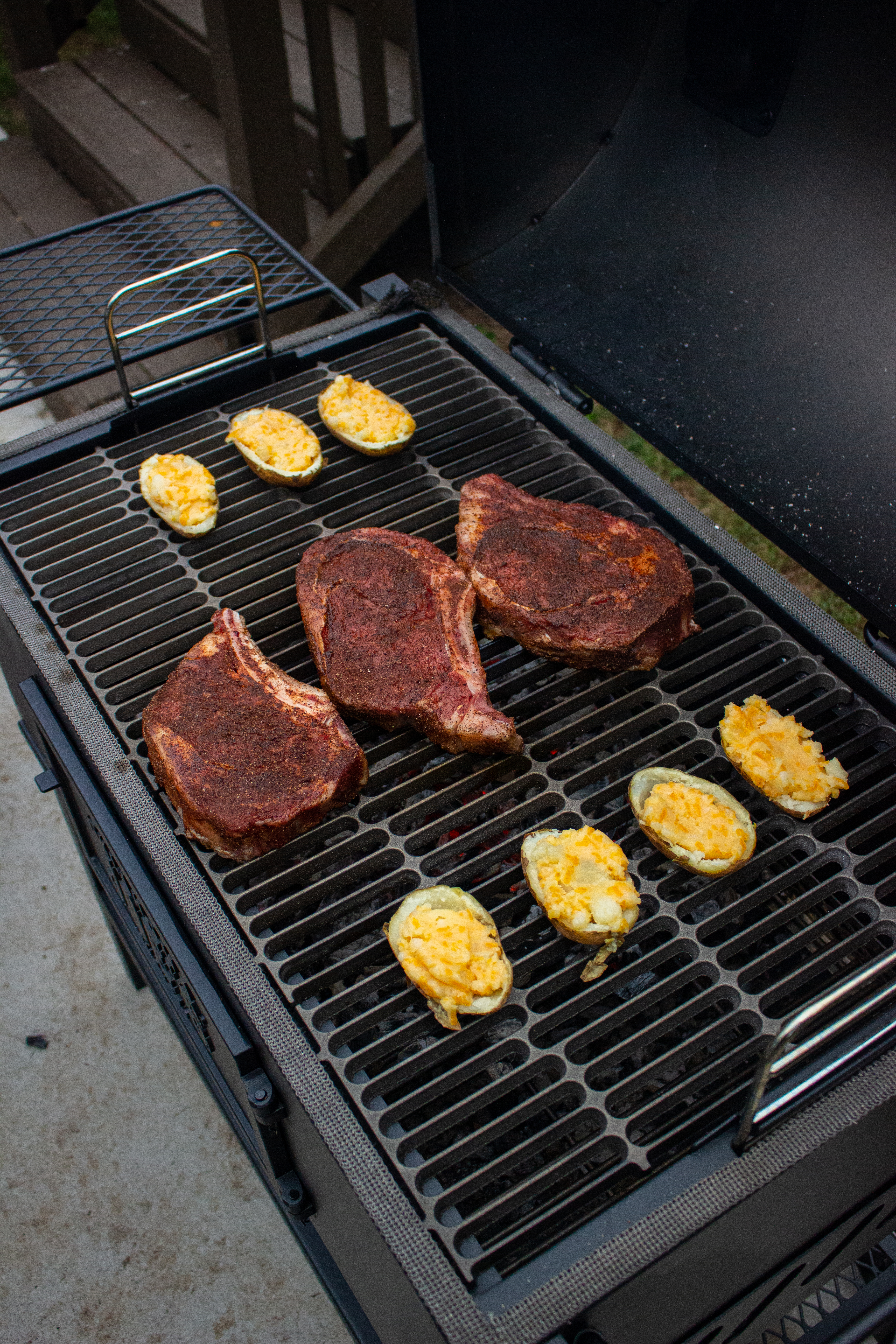 Every great steak, like these Chipotle Espresso Crusted Ribeyes, needs an epic potato paired with it. These Coal Roasted Loaded Potatoes will not let you down.

I preheated the Judge Charcoal Grill with some charcoal, wrapped the potatoes in tin foil and threw them (literally) right into the coals. You will get a nice baked potato cooked right in the coals like this, but I wanted to take it a step further. 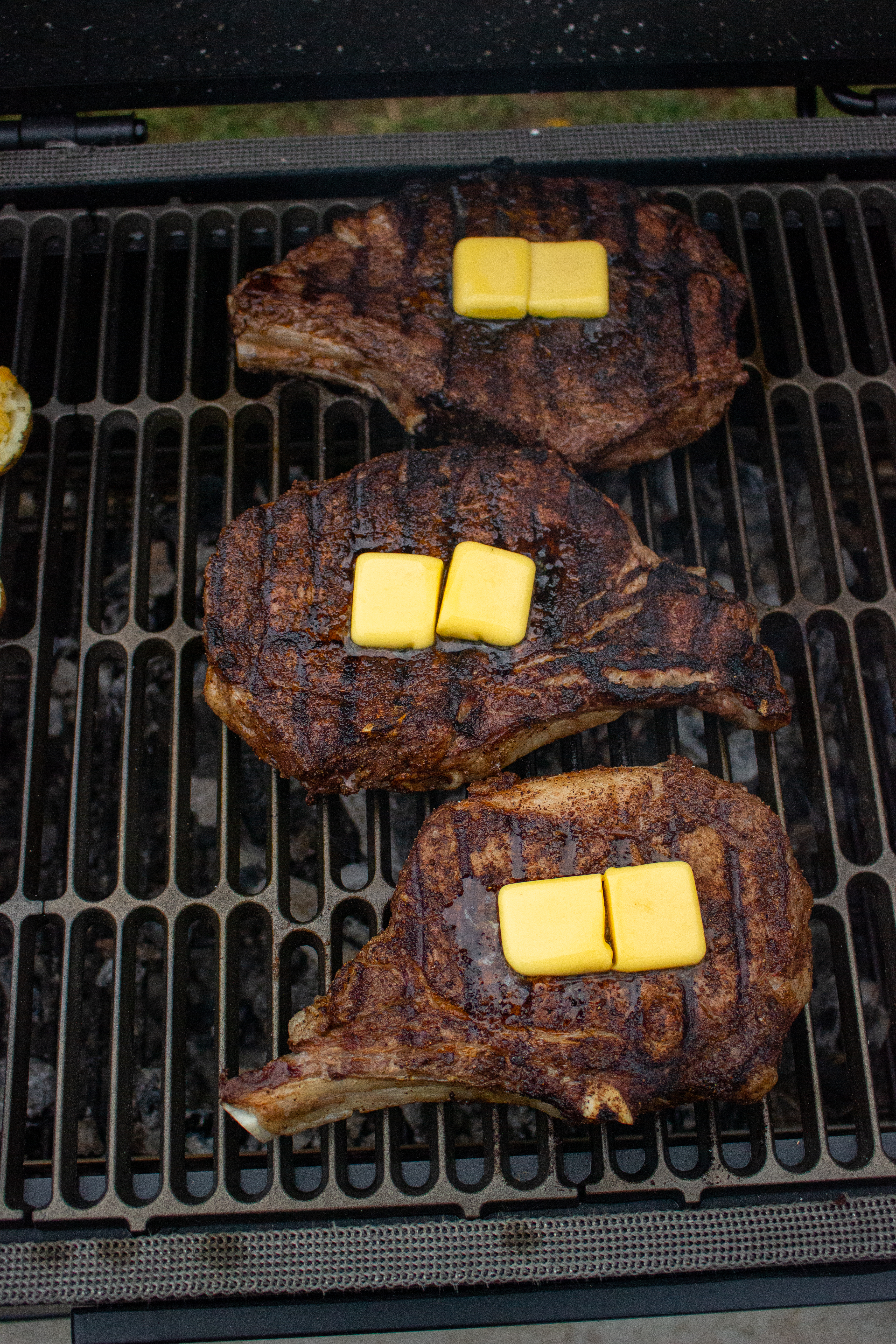 Once the potatoes were done, we scooped them out and mix that with cheese and butter. Scooping out this cheesy mixture back into the potato shells, we are making our own version of twice baked potatoes.

While the steaks cooked on the Judge, we added the potatoes to the indirect heat side to caramelize. Once done, we topped them with all the fixings and called it a day!

Slice into those Chipotle Espresso Crusted Ribeyes and grab yourself a Loaded Potato because it is time to eat. Loved making this recipe on the Oklahoma Joe’s Judge Charcoal Grill. It was hot, versatile and consistent. So stoked to be pairing up with Oklahoma Joe’s for the future too. Stay tuned for more and find the recipe below! 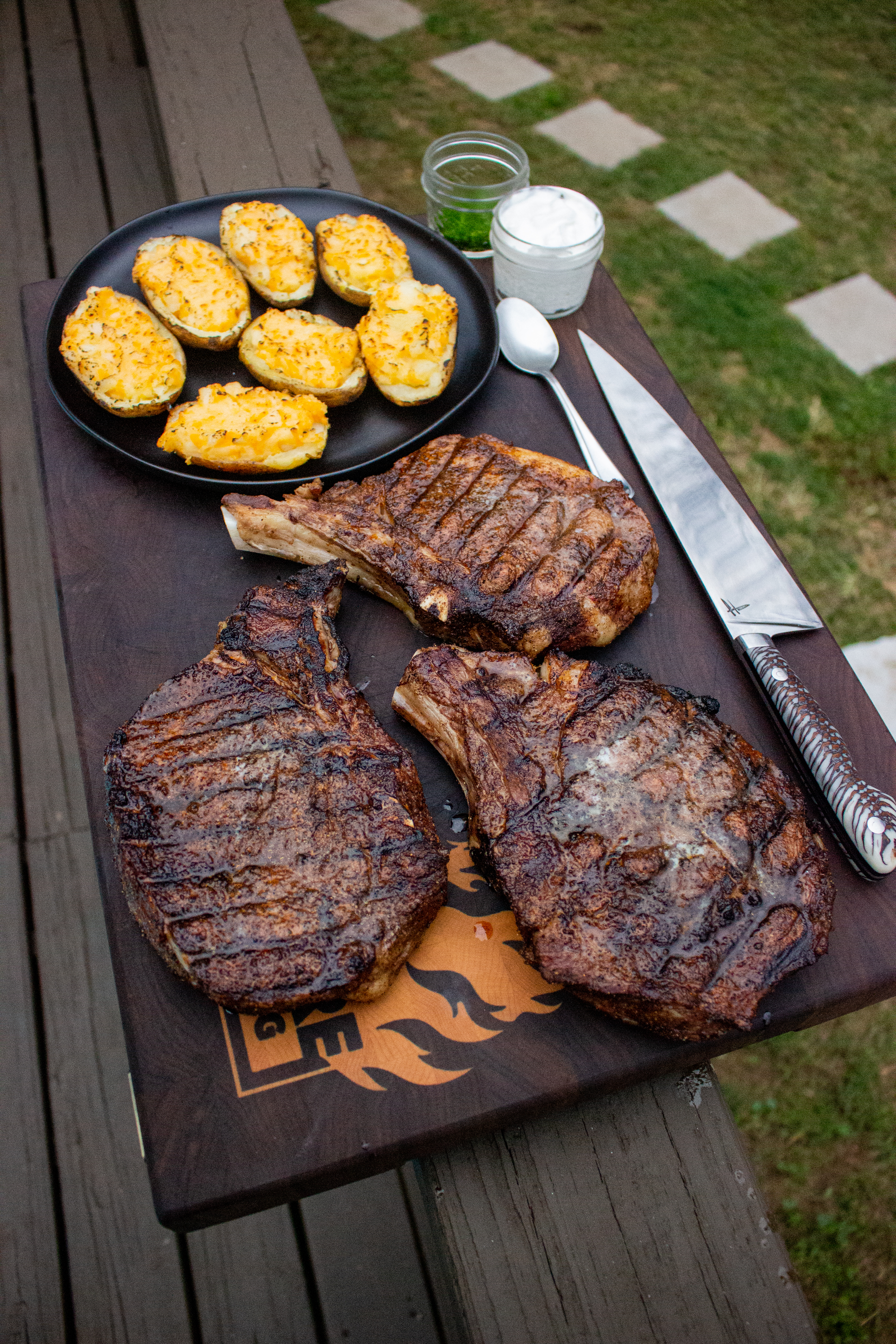 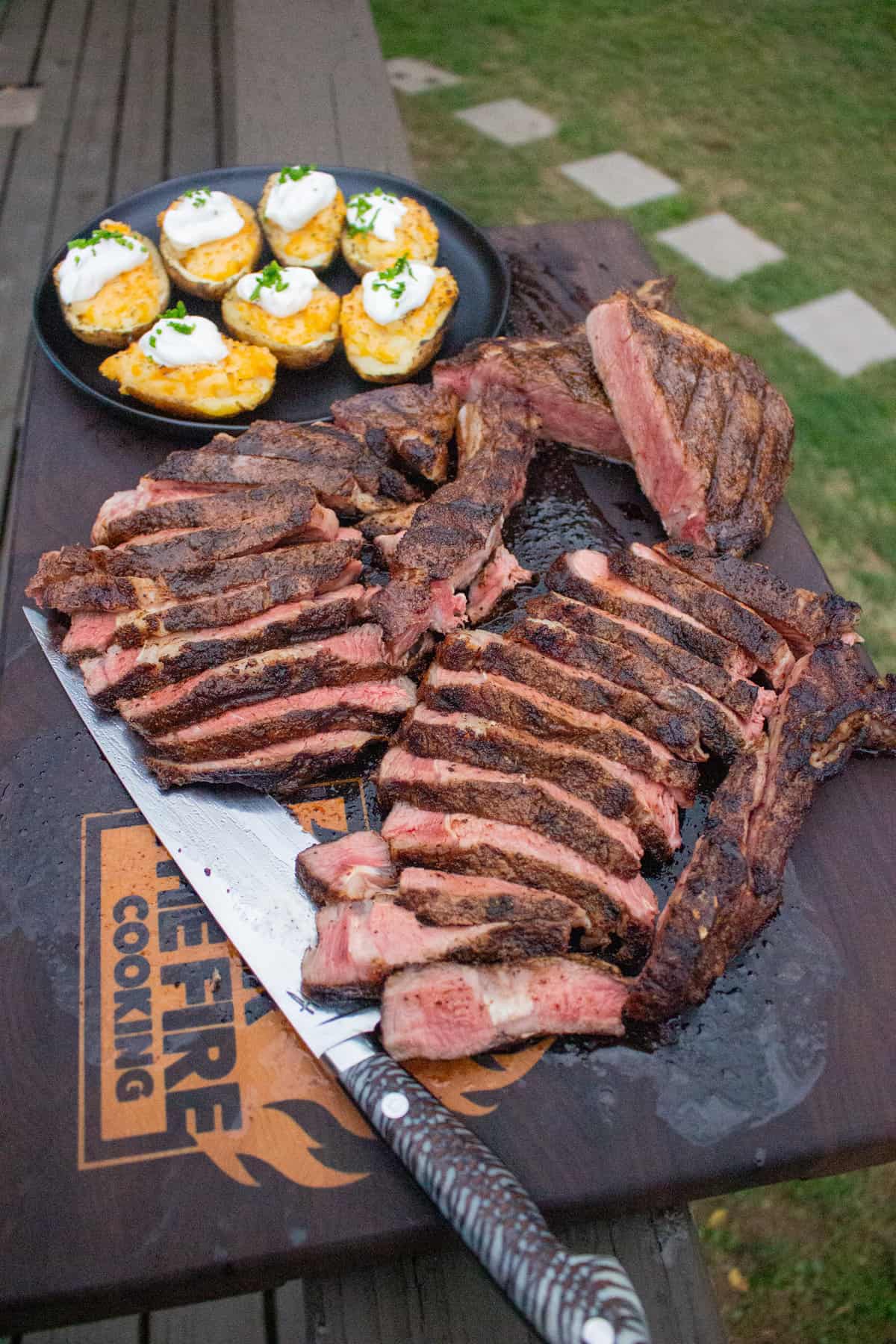 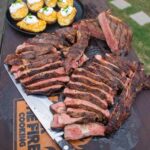