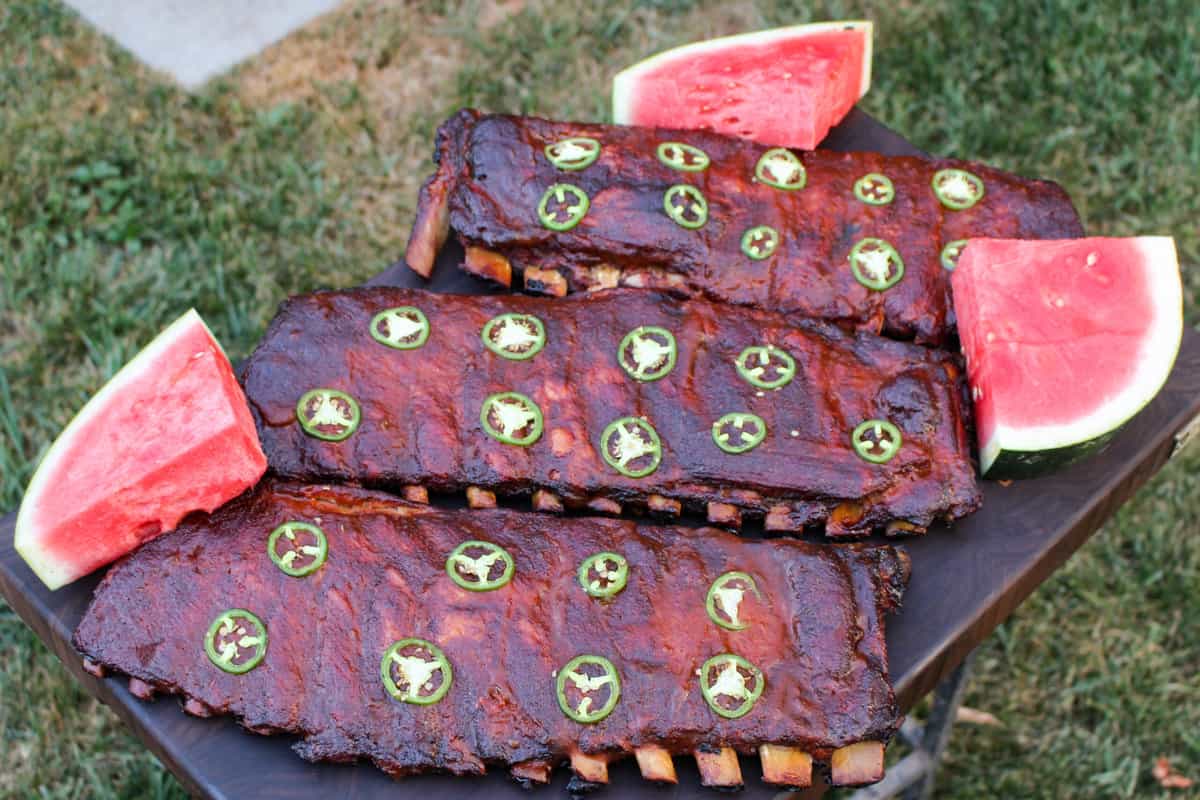 Jalapeño Watermelon BBQ Ribs just in time for your 4th of July celebrations! I’ve seen a lot happening with watermelon lately, and thought I’d jump on the bandwagon but with my own spin. Today we’re pairing puréed watermelon with some pickled jalapeños for a pork rib glaze. This was a new, spicy tang for me and I loved every bite of them! Make this recipe a reality at your next backyard BBQ! Keep reading for all the delicious details below.

The jalapeño watermelon aspect of this recipe doesn’t come into play until we make the rib glaze, so hang tight while I explain the beginning steps for these ribs. Like with any rib recipe, we’ll start by removing the silver skin from the pork ribs. This is on the back side of the rack of ribs and is almost impossible to chew threw, so we’ll want to remove it before we begin cooking the ribs. I like to use a butter knife and wedge it between the silver skin and the meat. After making a large enough gap, you can grab the silver skin and pull it off in one long rip. From here, you can trim any excess fat from the ribs and then move to seasoning.

I used mustard as a binder for my All Purpose BBQ seasoning from Spiceology. The flavoring on the BBQ is delicious, and (due to it’s “all purpose” nature) it’s a great blend to use as a base. It will give me the BBQ flavoring that I want, but not overpower my jalapeño watermelon glaze.

Lather each rack of ribs with the mustard and generously season each rack of ribs on all sides. From here, take them to the smoker. We will let the ribs smoke here for about three hours. After placing the ribs on the smoker, head back inside to make a spritzer. My spritzer consisted of apple cider vinegar and hot sauce. I mixed it together in the spay bottle and spritzed my ribs every 30 minutes. 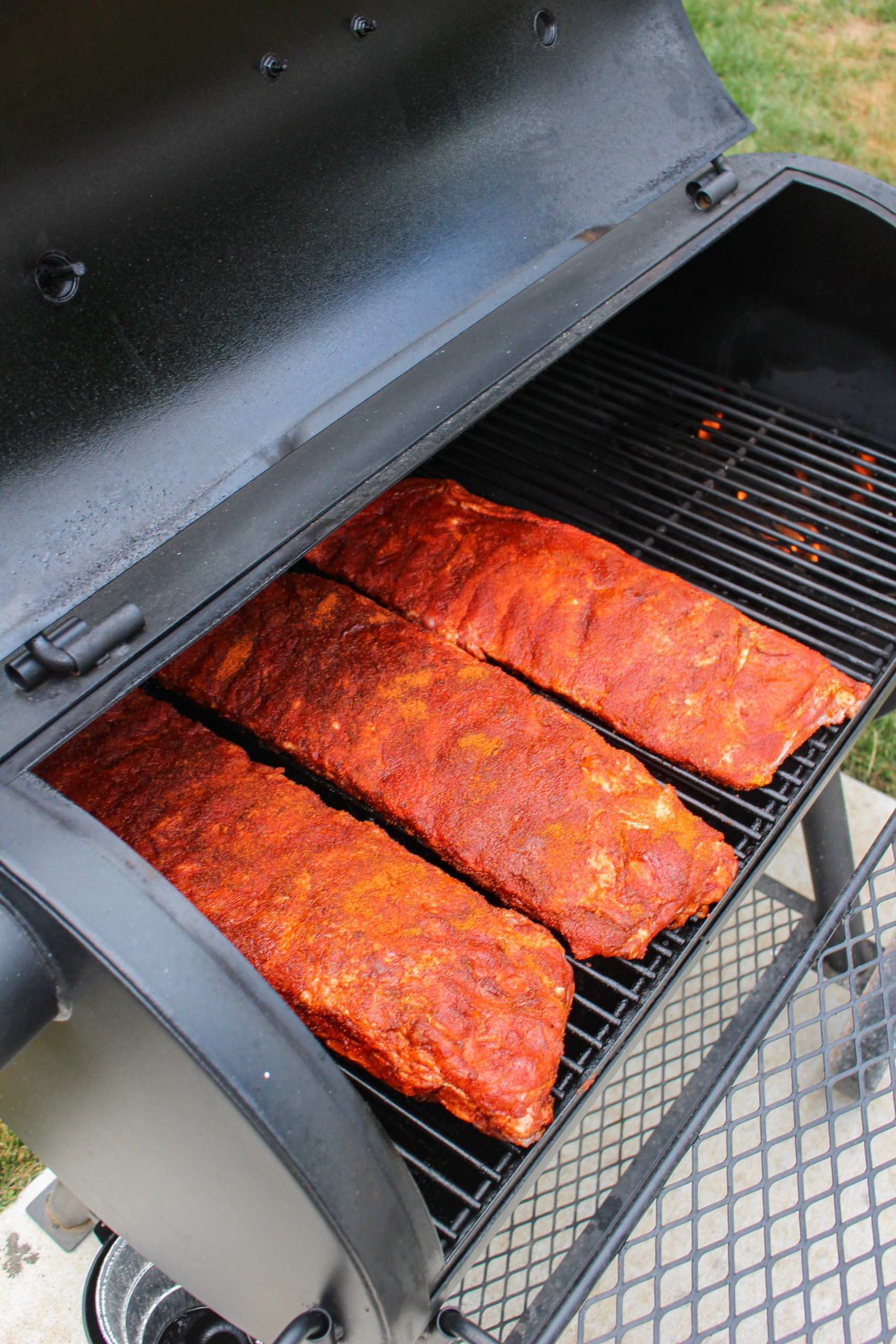 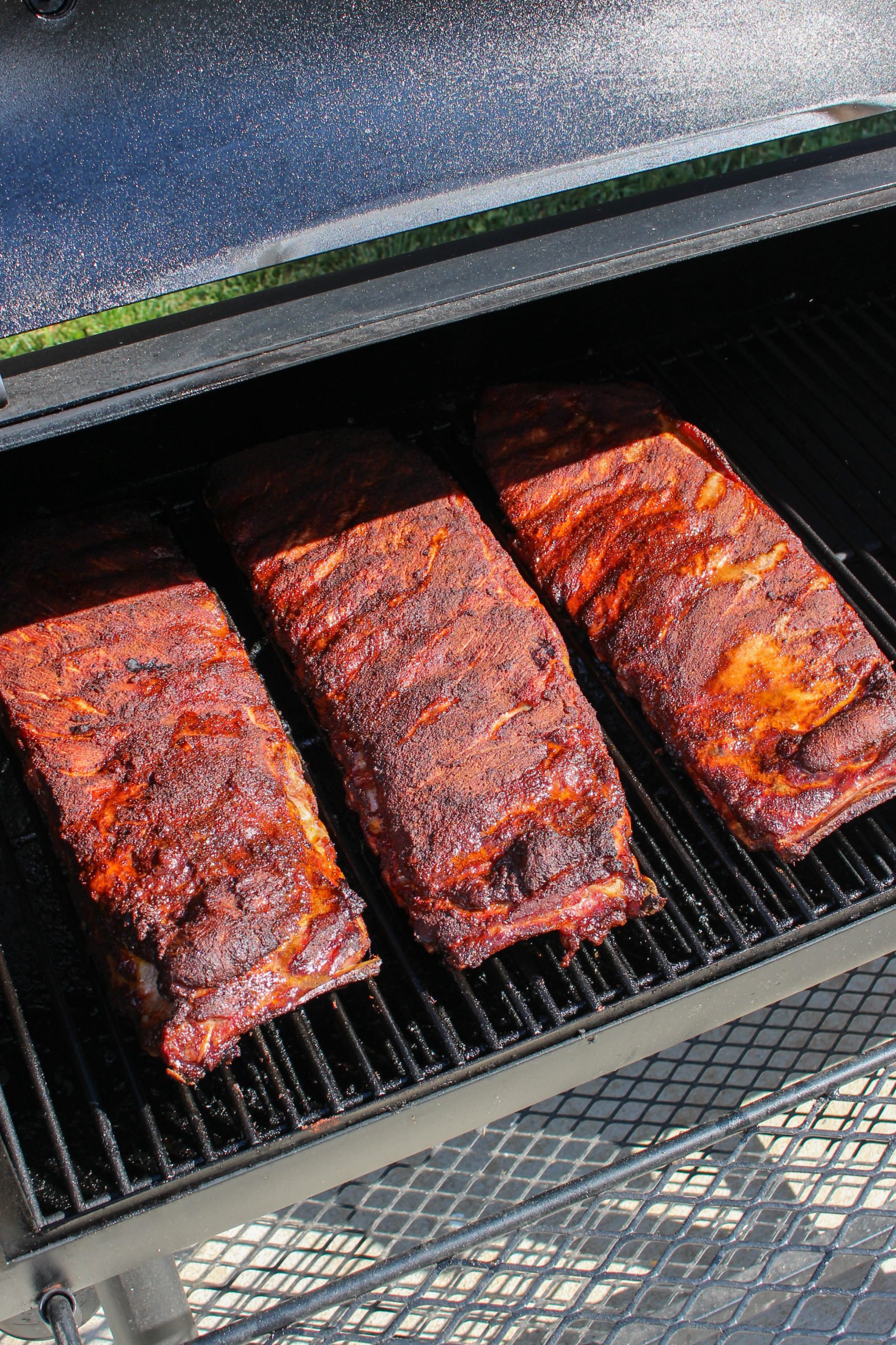 Step Two for Our BBQ Ribs

Once the ribs have been on the smoker for three hours, prep your aluminum wrap. I started this process by laying out a sheet of aluminum foil. Then place three slices of butter, a sprinkle of brown sugar and a drizzle of maple syrup onto the foil. Grab one rack of ribs and place it on top of the buttery sweetness. Then, on top of the rack of ribs I do another layer of butter, brown sugar and maple syrup. Now, wrap the ribs up tight and place them back on the smoker. They will remain here for two hours.

Now, while the ribs are in their sugar/butter bath, let’s make the glaze. This is where our jalapeños and watermelon come into play. Before making the glaze, you’ll need to purée some pickled jalapeños and watermelon. The spiciness of the jalapeños is such a great balance to the sweetness of the watermelon. Once these two ingredients are prepped, head back out to the smoker. In the charcoal chamber, add a small grill grate and sauce bowl. Once the sauce bowl is warm, add all your ingredients and bring to a simmer. Stir this mixture as needed until it’s combined and reaches a glaze consistency.

After the ribs have cooked for their two hours in the aluminum, remove them from the foil and place them back on the smoker. They’ll cook here for one final hour. During that hour is when we will baste them in our jalapeño watermelon glaze. Add on as much of the glaze as you like. I also topped my ribs with some sliced jalapeños for that extra flare and a bit of spice. When the last hour of cooking has past, remove the ribs from the grill and let them rest for a couple of minutes. Then, it’s time to eat! Best enjoyed with friends and family. Cheers! 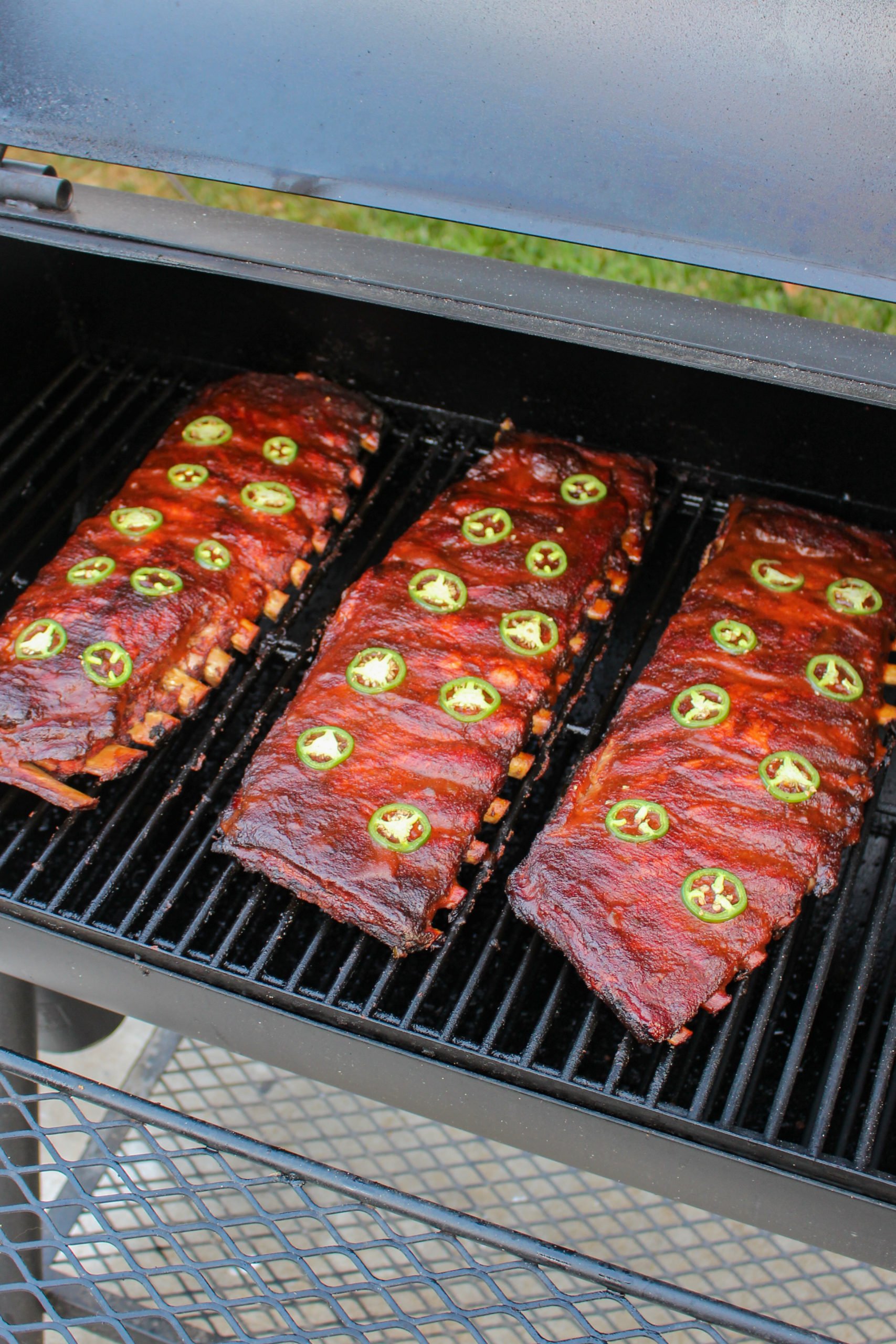 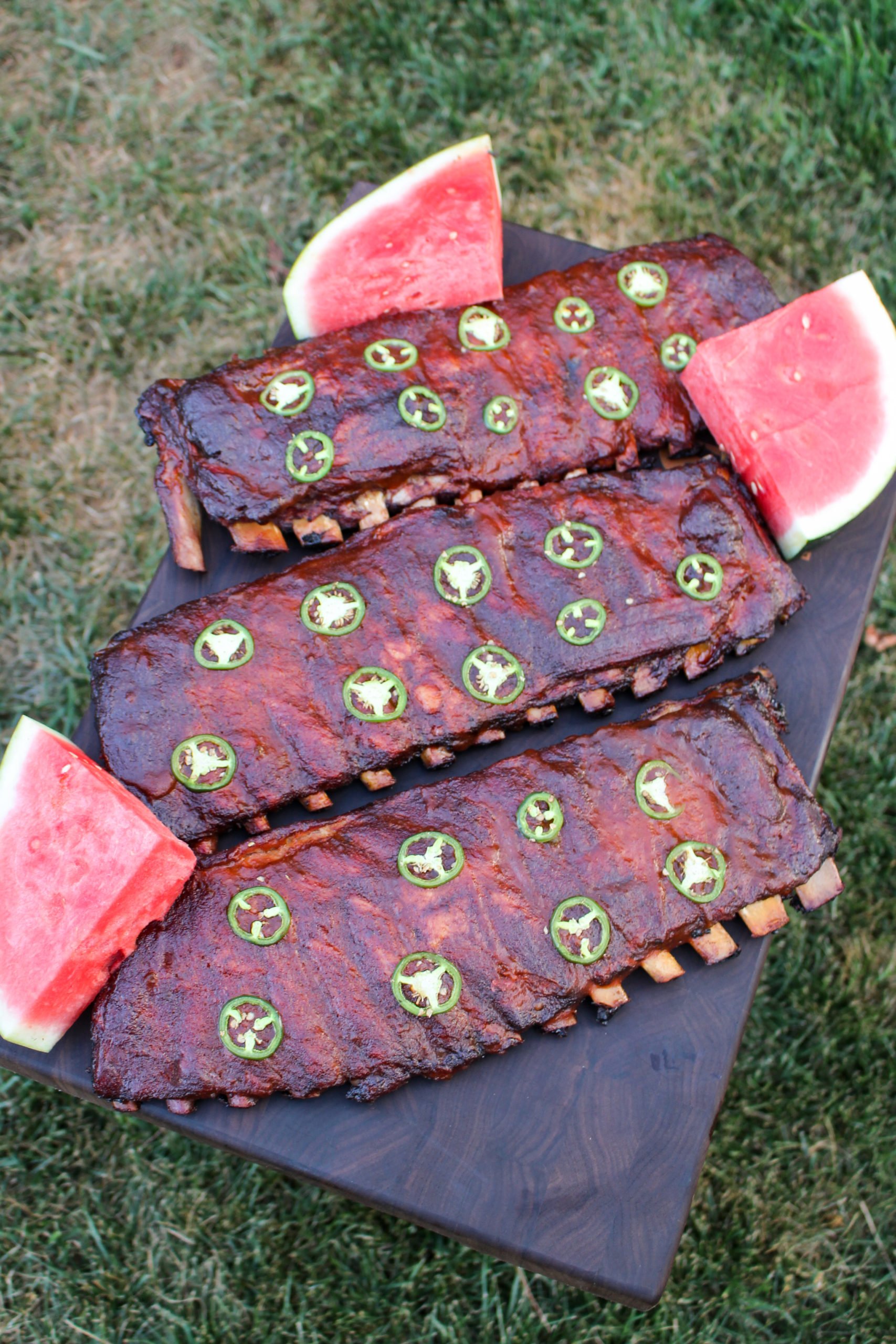 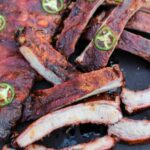 Jalapeño Watermelon BBQ Ribs just in time for your 4th of July celebrations! I’ve seen a lot happening with watermelon lately, and thought I’d jump on the bandwagon but with my own spin.