We can all use a really good steak every once in a while. This Steakhouse Ribeye is loaded with garlic salt and paired with king oyster mushrooms, charred asparagus, horseradish butter and BUSH’S® Steakhouse Recipe Grillin’ Beans. It is the ultimate backyard steakhouse experience.

Making some ribeyes and sides

The key to making really amazing steak is the crust. While some people might love grill marks, an amazing crust adds flavor and texture to your meat that is what makes it stand above the rest.

One of the main ways to do that in these Steakhouse Ribeyes with Horseradish Butter is to keep them dry. No, the steaks will be tender and juicy. I just mean to not add oil or any other binder to them except the garlic salt. This will help to create a crust quickly on the meat as it sizzles on the griddle. Next up are the sides!

Today, we are bringing three different sides to this Steakhouse Ribeyes. We will have charred asparagus, seared king oyster mushrooms and BUSH’S Steakhouse Recipe Grillin’ Beans. To be honest, you really only need the steak and the beans to make this meal delicious; however, it doesn’t hurt to add the asparagus and mushrooms. BUSH’S Steakhouse Recipe Grillin’ Beans are added to a cast iron skillet to sizzle over the fire for a couple of minutes until they are piping hot. Sear off your mushrooms and asparagus in the griddle to make a full meal.

Lastly, don’t forget to mix together your Horseradish Butter. Roll that up into a cylinder and place it into the fridge to set 2-3 hours before you start cooking so it is nice and firm. Top the butter onto the Steakhouse Ribeyes while they rest for the ultimate flavor.

Loving these steaks? Check out my steak oscar with asparagus recipe for more grilled inspiration.

Dive into these Steakhouse Ribeyes with Horseradish Butter

When you are done, you are left with encrusted Steakhouse Ribeyes, a bunch of hearty sides and these delicious BUSH’S Steakhouse Recipe Grillin’ Beans. This is a full meal that will leave you happy in the end; therefore, Cheers! 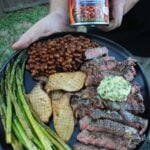