This Donut Breakfast Sandwich is the triple threat of all breakfast meals: sweet, salty and savory! I haven’t done a breakfast recipe in a minute, so when a new donut shop opened up down the street I decided it was time to get back on that breakfast game! What’s the cherry on top of this delicious creation? Two words: candied bacon. Nuff said, let’s dive into this recipe.

Bacon or sausage? When you’re making (or ordering) your favorite breakfast sandwich, which do you prefer? Personally, I rotate. It really just depends on what I haven’t had in a while and what sounds best at the time. However, when it came to the construction of this Donut Breakfast Sandwich, I kept going back and forth. So then, I asked myself a better question. Why not both? I couldn’t think of why I wouldn’t double up on this epic breakfast sandwich. Alas, our Donut Breakfast Sandwich became even more delicious.

You know what else makes a delicious breakfast sandwich? Candied bacon. This candied bacon could honestly be eaten all by itself. The good news is that it’s super easy to make, and is actually the first thing I did for this recipe.

Start by cutting some bacon slices into small, cube-like pieces. Then, place them in a preheated skillet over the fire. As they begin cooking, add in some of my Maple Bourbon seasoning and give them a stir. Next, to get that beautiful, sweet caramelization to our bacon bites we’ll add some maple syrup and a splash of bourbon. Once they’ve finished cooking, remove them from the skillet. Set them aside for later. 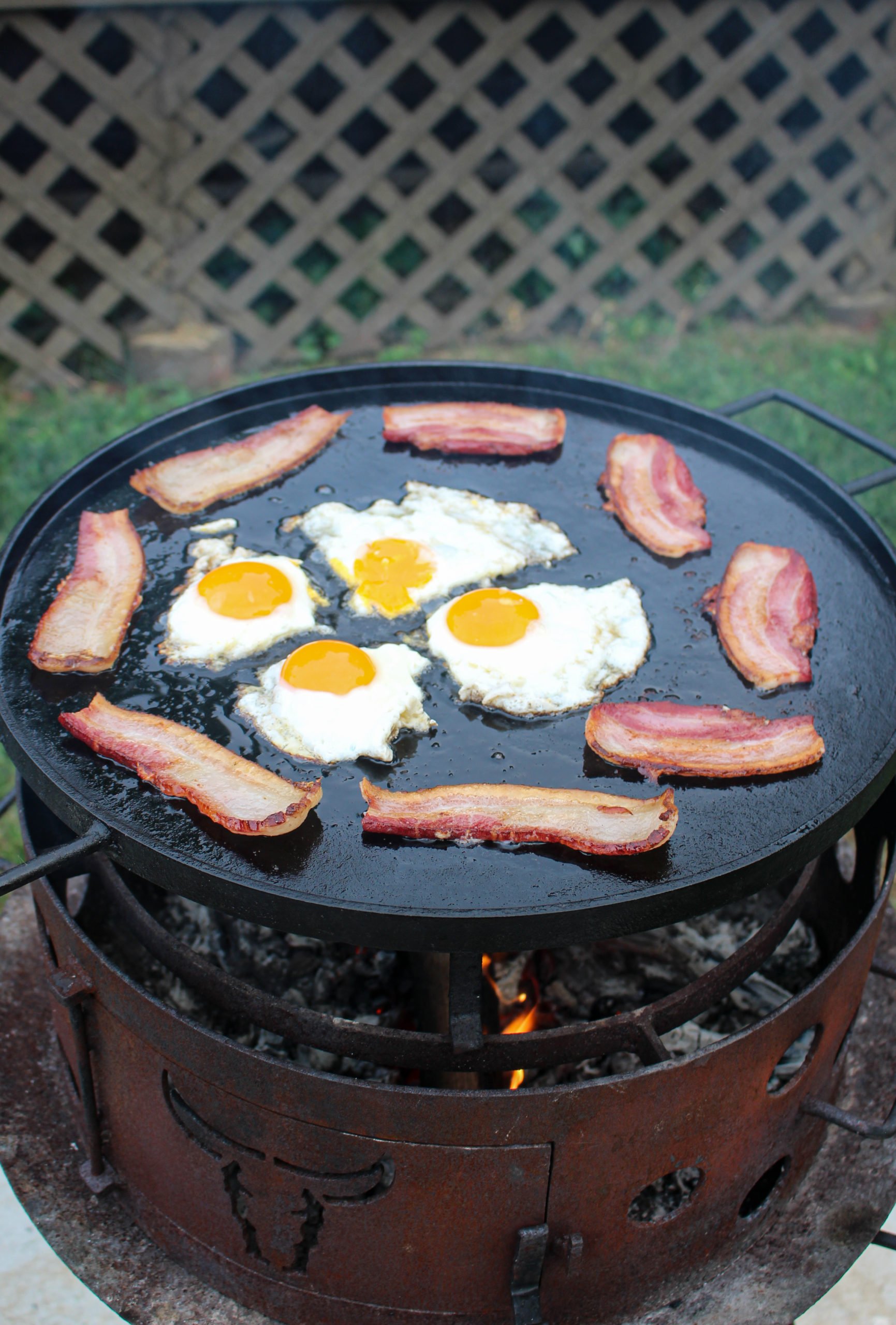 Up next, the sausage patties. I started with some ground sausage and rolled them into small sausage balls. From here, place them on the grill and break out the burger smasher. Smash each one into sausage patties and top with cheese. Pro tip: place some wax paper between your burger smasher and the sausage. It will ensure the sausage doesn’t stick to the smasher. As the cheese melted and the sausage finished cooking, I stacked one sausage patty on top of another. Creating three sets of double stacked, cheesy patties. Now, remove them from the plancha and set them to the side along with the candied bacon.

The last items we have to cook for our Donut Breakfast Sandwich are the bacon strips and fry up some eggs. I cooked both these items at the same time. I started with the bacon by placing six strips of it around the outside of the plancha. Then, carefully add four eggs to the center of the plancha. As the bacon cooks, it’s fat will gravitate to the center of the grill. The bacon fat will add a delicious flavor to our eggs and also ensure they don’t stick to the plancha while cooking. Flip the bacon as needed and remove it all from the plancha once it’s finished cooking. 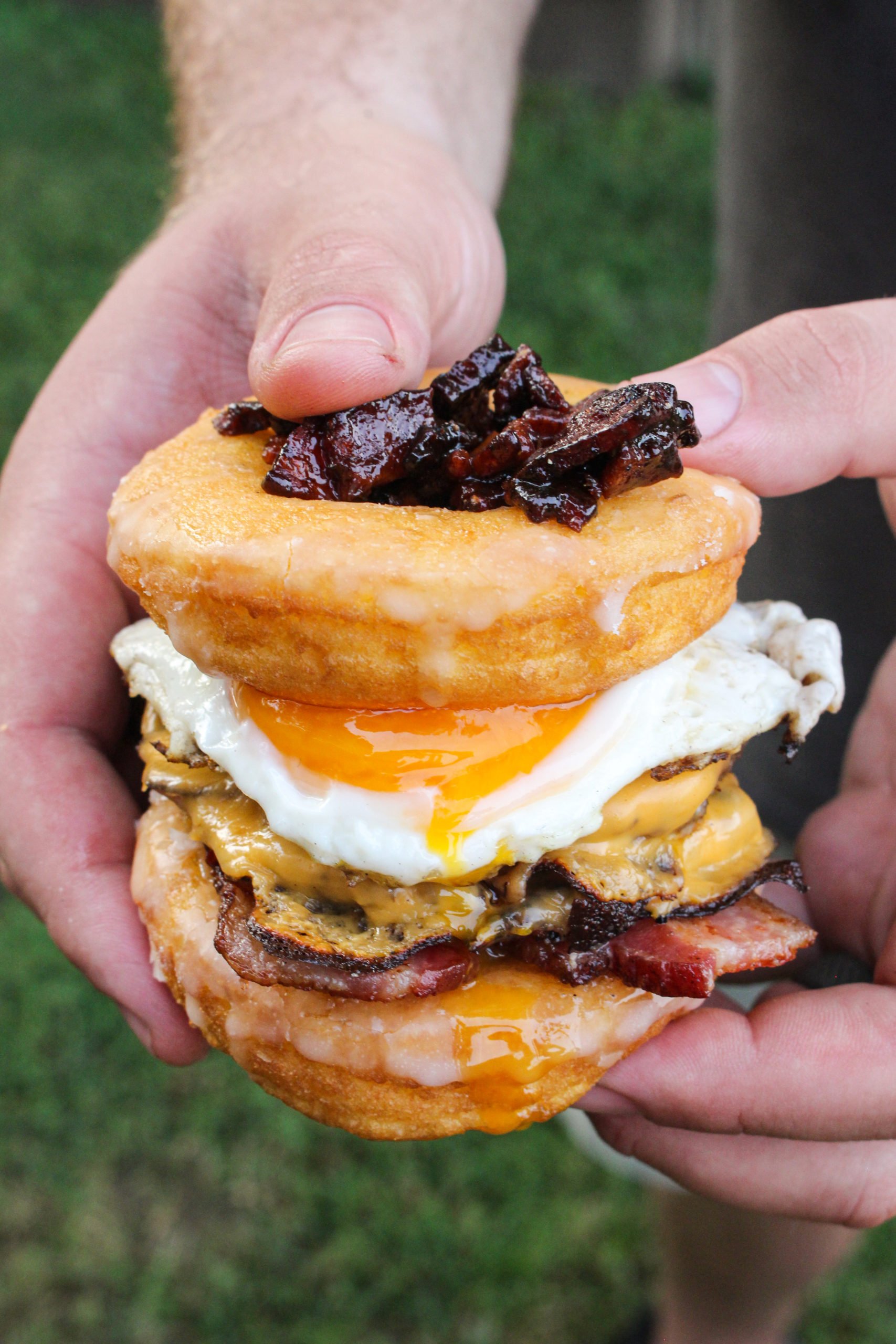 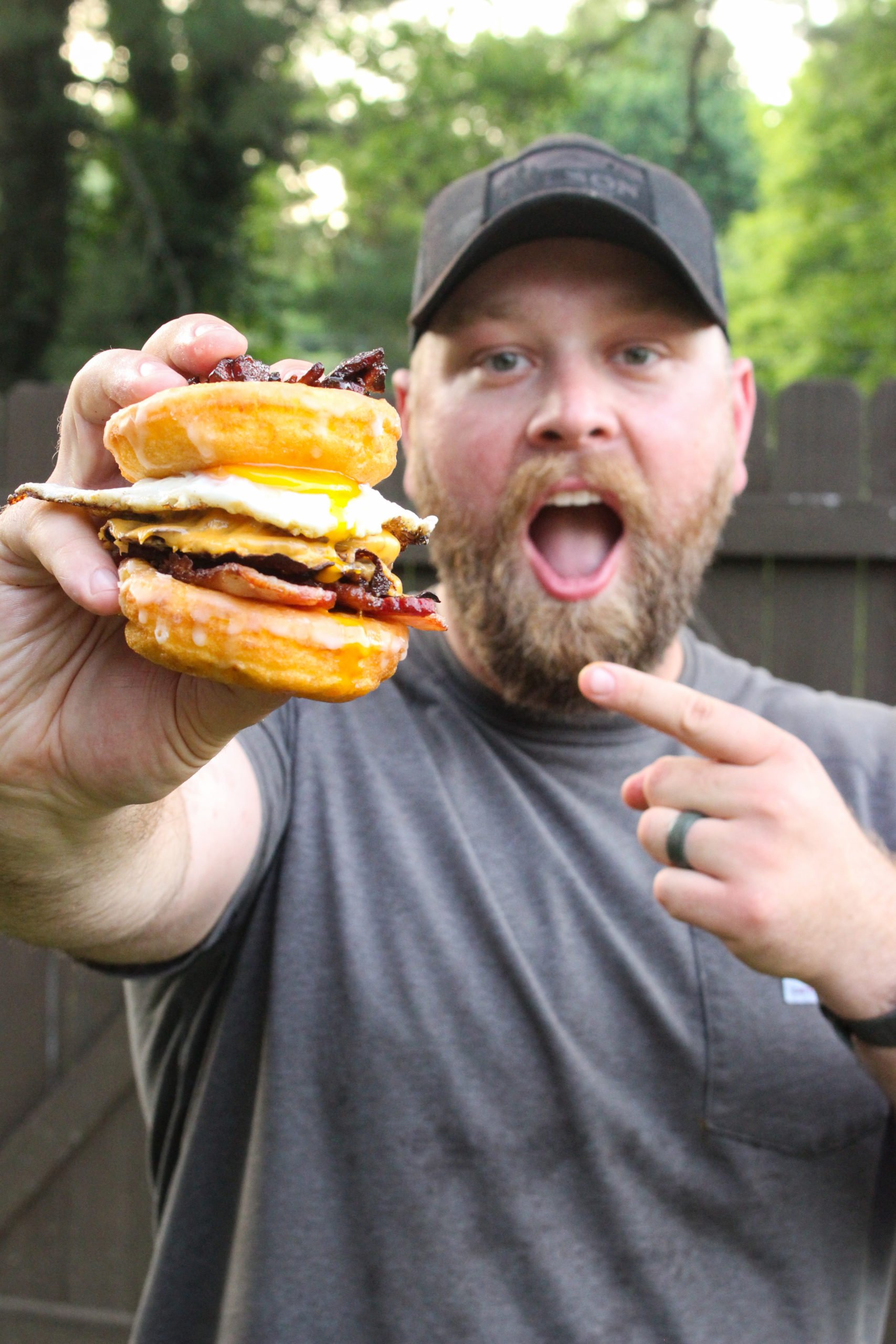 All that’s left to do is assemble and enjoy. I started by placing down my three base layer donuts. Then add the bacon followed by the double stacked, cheesy sausage smash patties. Lastly, add the fried egg, top with another donut and garnish with that candied bacon. It’s going to take two hands to devour this epic Donut Breakfast Sandwich, but I don’t think you’ll mind. Best enjoyed with friends and family. Cheers! 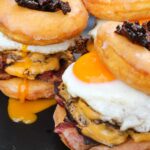 This Donut Breakfast Sandwich is the triple threat of all breakfast meals: sweet, salty and savory!