Honey Gochujang BBQ Wings for something sweet, something salty and we can’t forget about the spice. All that flavor delivered to you in the form of one chicken wing! However, if you’re like me you’ll be enjoying more than just one of these bad boys. These wings were seasoned, smoked, fried and tossed in a Honey Gochujang BBQ Sauce that I made from scratch. Talk about flavor blasted. Let’s jump right in.

We’ll soon talk about seasoning for these wings. However, I felt that I should mention that the first thing I did for this recipe was fire up the smoker. We have a pretty straightforward chicken wing preparation process for this recipe, so it’s good to get the smoker preheating now so that it’ll be ready to go after we season the wings. I used my offset smoker for this recipe. We’re going to make a Honey Gochujang BBQ Sauce in the charcoal chamber later, so this smoker was the perfect fit for this cook.

Alright, onto the wings. I started by putting all my chicken wings into a large mixing bowl. Then I lathered them with oil and covered them with some Korean BBQ Seasoning. For those unfamiliar, gochujang is a Korean chili paste. It’s made with gochugaru, which are Korean red chili flakes that are inherently smoky and spicy. Funny enough, I actually added some gochugaru to the wings after the Korean BBQ Seasoning to really enhance those smoky and spicy flavorings. Now, onto the grill.

I opened the door to my preheated smoker and dumped the wings straight in. From here I spaced them out to make sure none were touching. Then close the lid and let them smoke. We’ll leave them here for about an hour to an hour and a half. Up next we’ve got that Honey Gochujang BBQ Sauce. 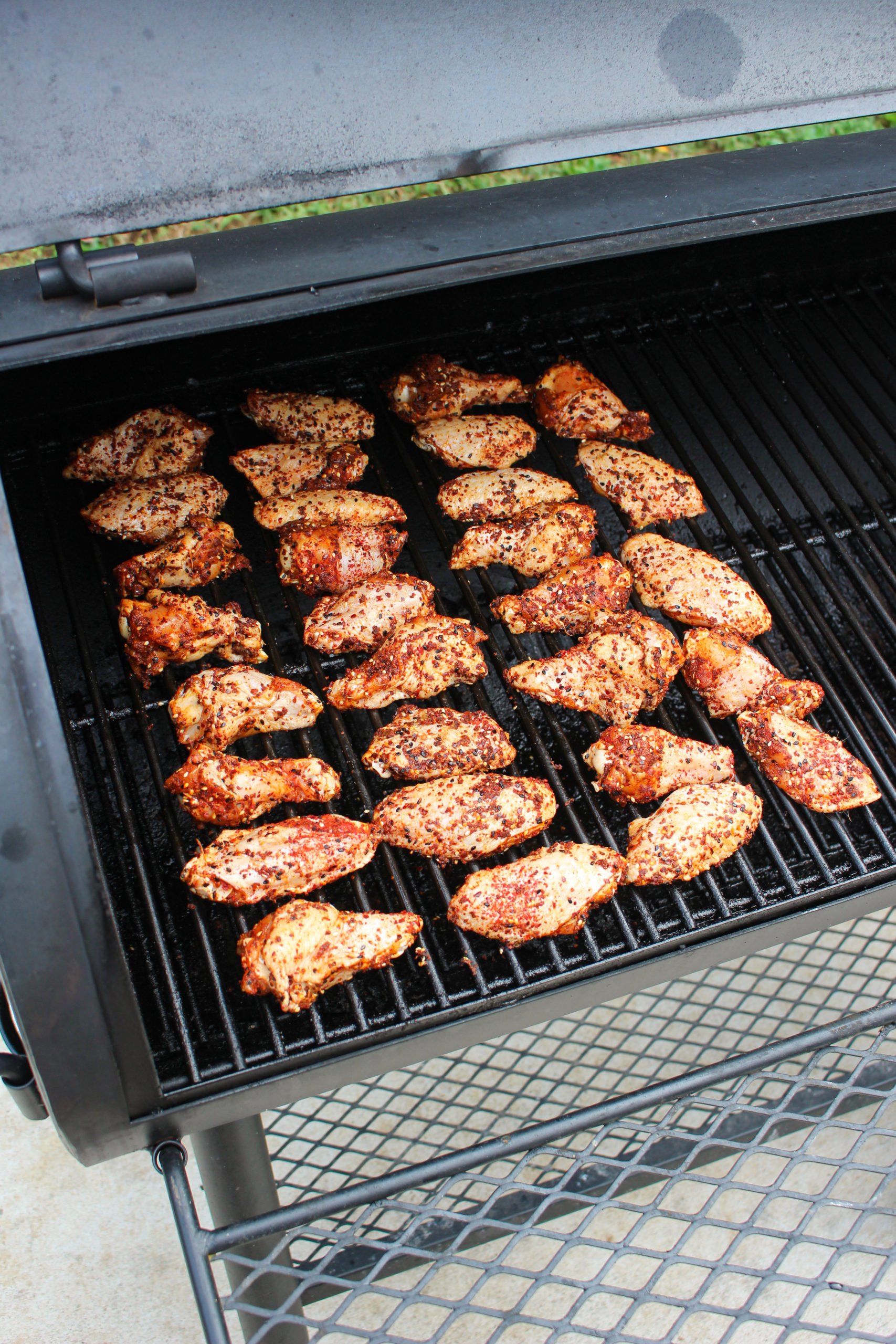 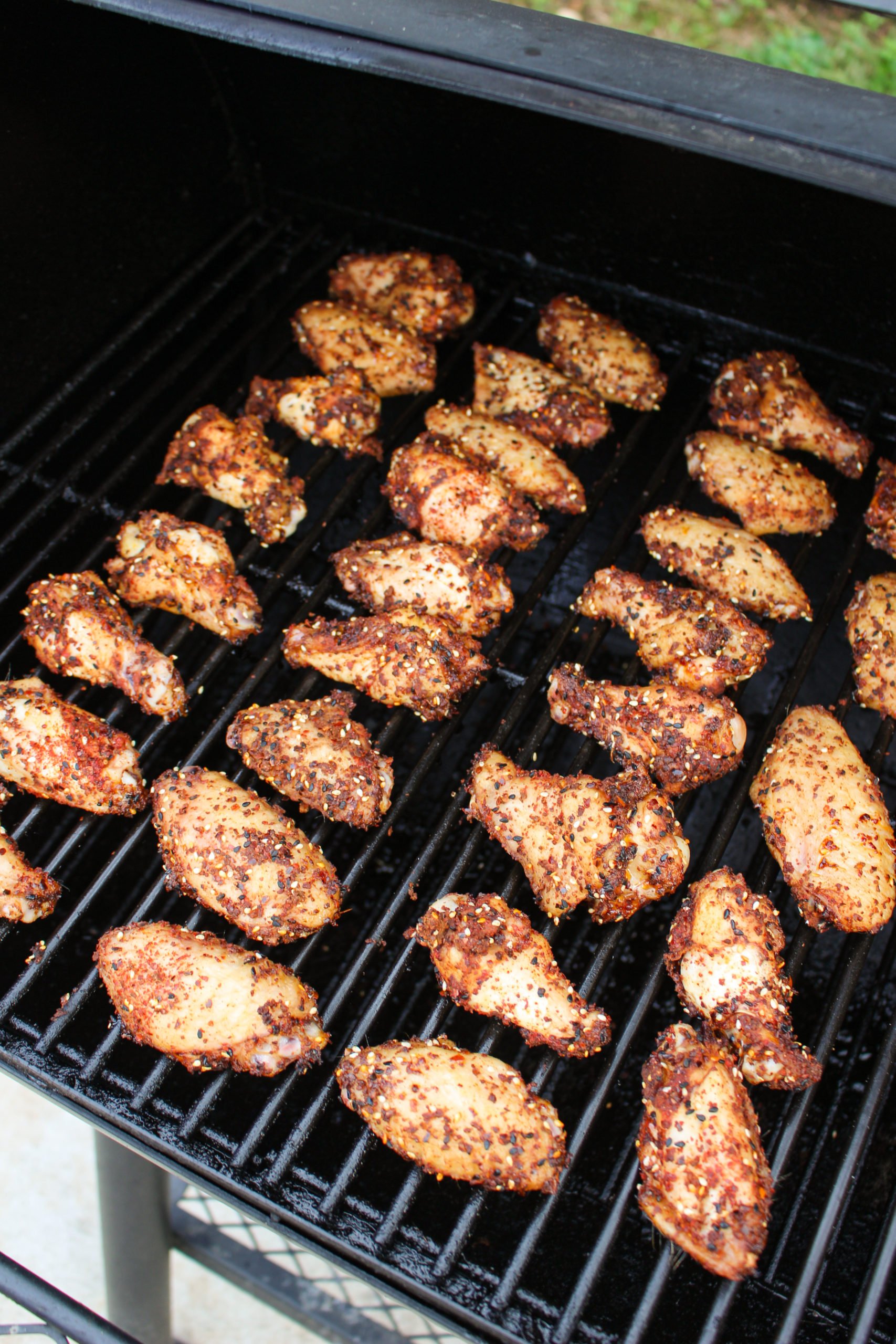 For this BBQ sauce, I placed a grill grate over the hot coals in my smoker’s charcoal chamber. Then, I added a cast iron skillet and let it preheat. From here, I tossed some butter into the skillet and let it melt. Then, we’ll add the garlic and sautée it for about a minute. After the garlic has browned, mix the remaining sauce ingredients together in the skillet except for the cornstarch and water.

The cornstarch and water mixture will help thicken the sauce, but before adding it we’ll want to let all the other ingredients fuze together. I let mine boil, while stirring it, for a minute or so. Then, add the cornstarch and water. Keep stirring the mixture until it thickens and then remove it from the heat. 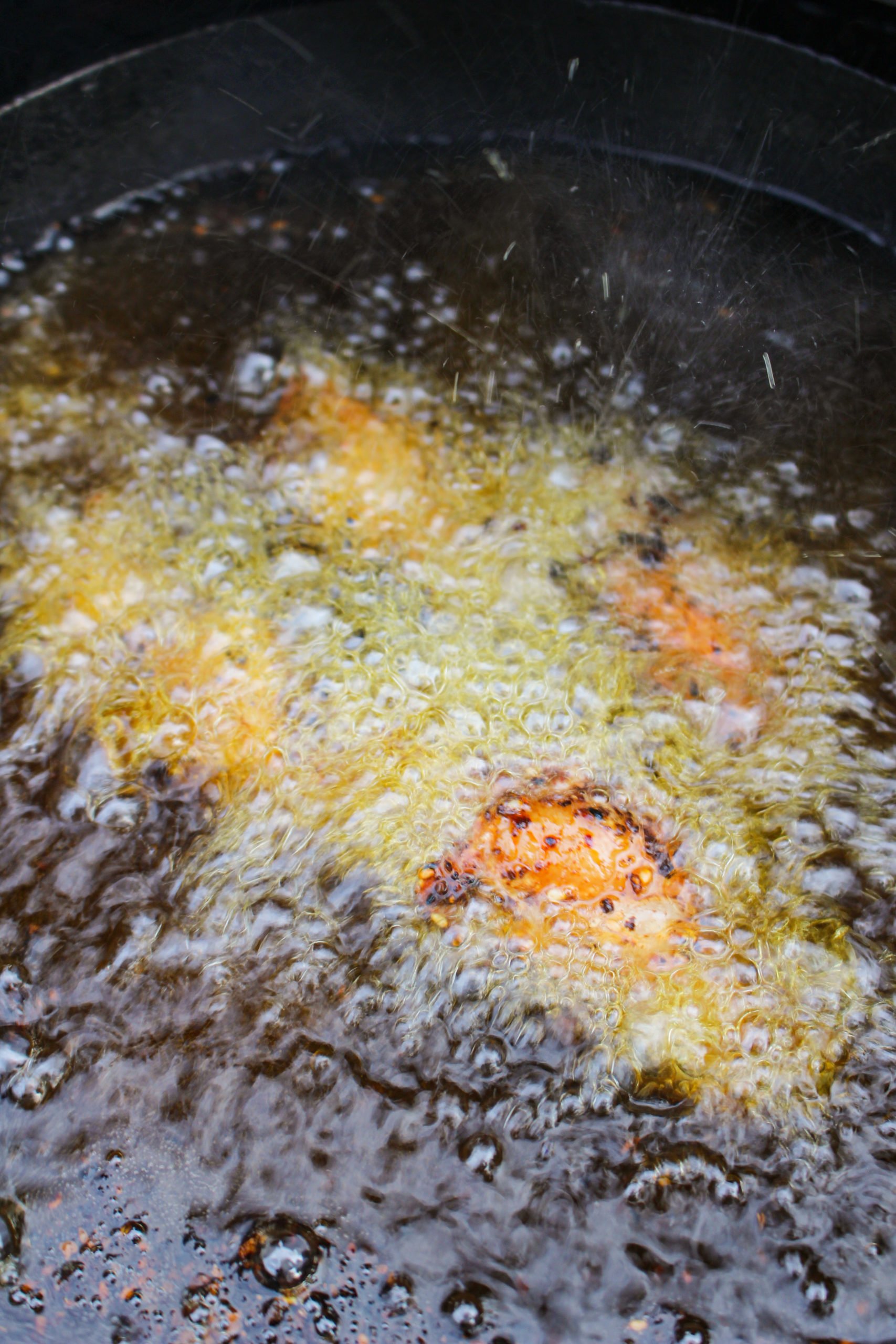 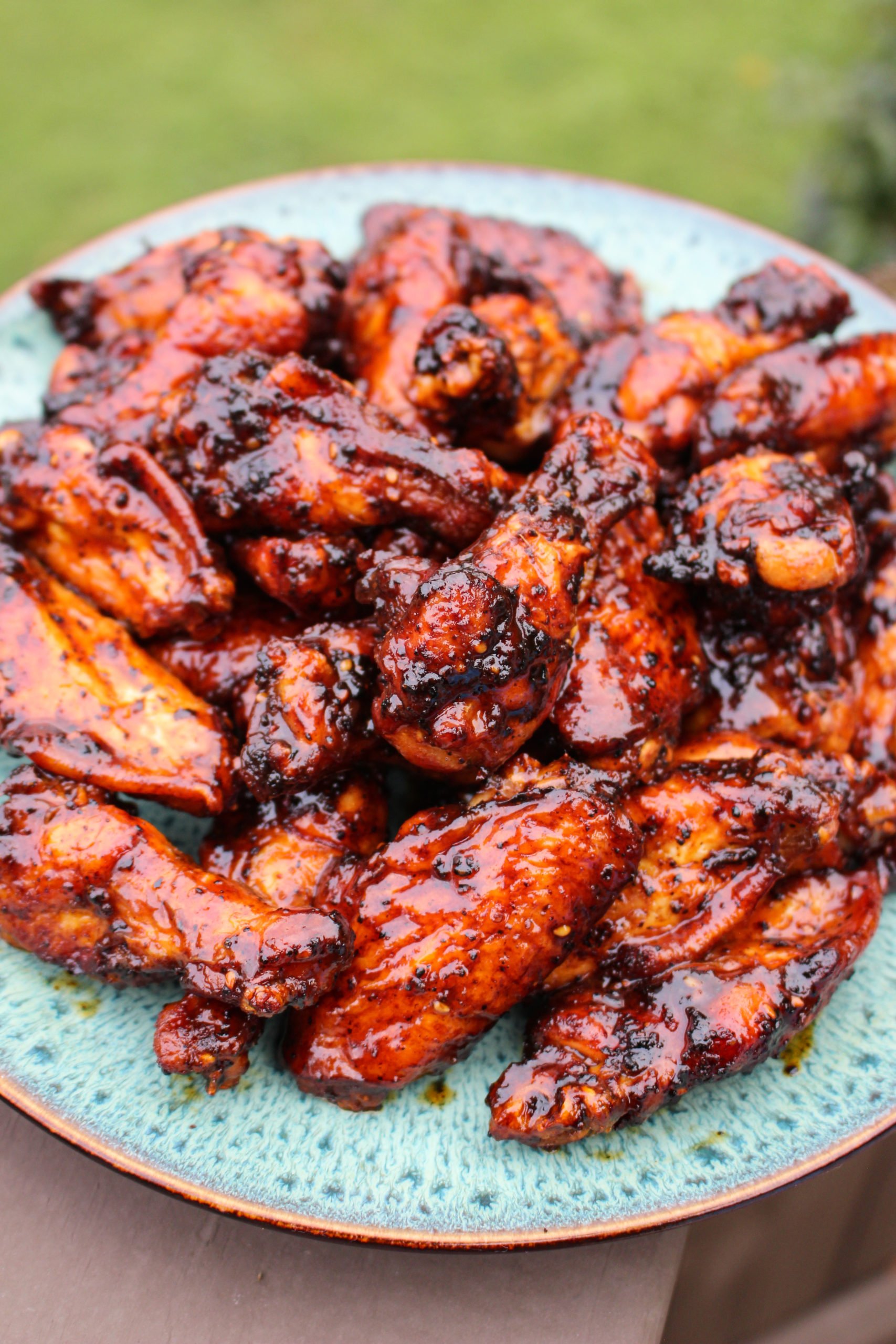 When the Honey Gochujang Wings reach an internal temperature of 165F, they’re ready to be fried. I placed a fresh, deep cast iron skillet over the hot coals and filled it halfway with frying oil. After the oil becomes hot, carefully place five to six wings into the skillet. This is just a flash fry, so remove the wings from the oil after about a minute and a half.

You’ll likely have to fry the wings in batches, which is fine! As mine finished frying I pulled them from the oil and placed them in a large bowl. Once all the wings are fried and in the bowl, we’re ready to add our BBQ Sauce.

Pour the Honey Gochujang BBQ sauce over the wings and give them a toss. Keep tossing until all the wings have an even coating. Then place the wings on a serving plate. I stacked mine on a dish and drizzled them with a gochujang, apple cider vinegar, and honey mixture. Then I finished garnishing them with sesame seeds and chopped scallions. This dish is spicy and it’s time to dive it! Best enjoyed with friends and family. Cheers! 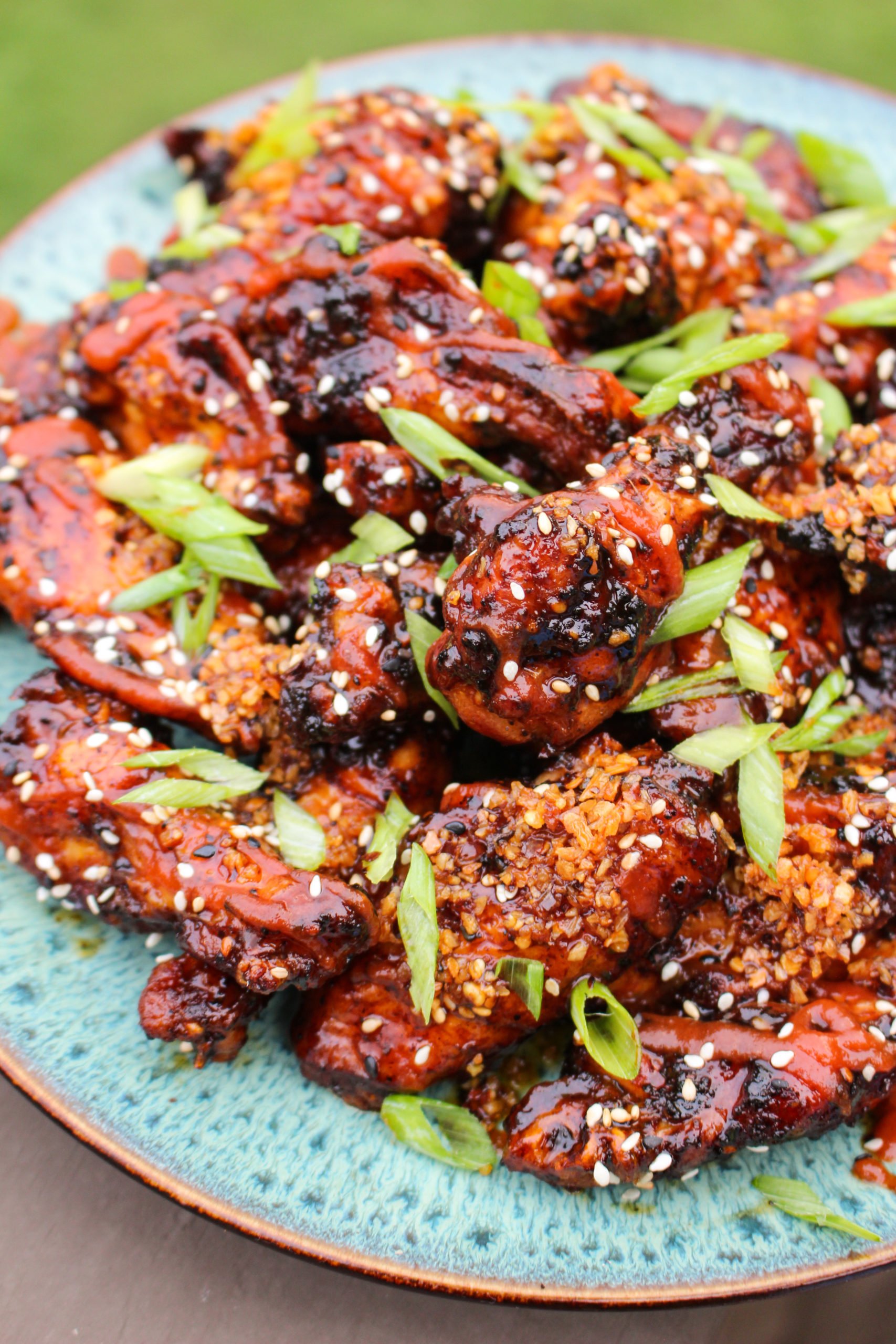 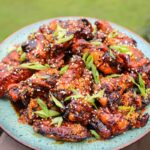 Honey Gochujang BBQ Wings for something sweet, something salty and we can’t forget about the spice.