Maple Bourbon Spatchcock Turkey is here, and it’s just in time for Thanksgiving! You know what else is just in time for the holidays? A special release, limited edition, “single barrel” version of my Maple Bourbon seasoning! Maple Bourbon is one of the first seasonings I developed with Spiceology, and is now favored by all. You can find it on Spiceology’s website now, just click here. I used it on this turkey and loved the flavoring so much that I’m going to remake this exact recipe for my family’s Thanksgiving. Cheers to you and yours over the holiday!

Why You Should Brine Your Maple Bourbon Spatchcock Turkey

This recipe starts with a process known as brining. If you don’t know about brining, let me give you some more information.

Brining is very similar to marinting, except a brine’s foundation ingredients are salt and water (you can also add sugar). The purpose of a brine is to help the protein retain moisture. It does this by dissolving some muscle fibers of the meat, which results in a more tender and juicy meal. You can also use brines to help infuse flavor by adding your desired herbs or seasonings. For this recipe, I tossed in a couple bay leaves and cinnamon sticks. This means before my turkey even hit’s the grill it’s already had time to tenderize and take on flavor. How awesome is that?!

To start the brining process, fill a 5 gallon food grade bucket with water. Then I mix together all the brine ingredients and carefully set the turkey in. Place it in the fridge to brine overnight, it should remain there for 8-18 hours. 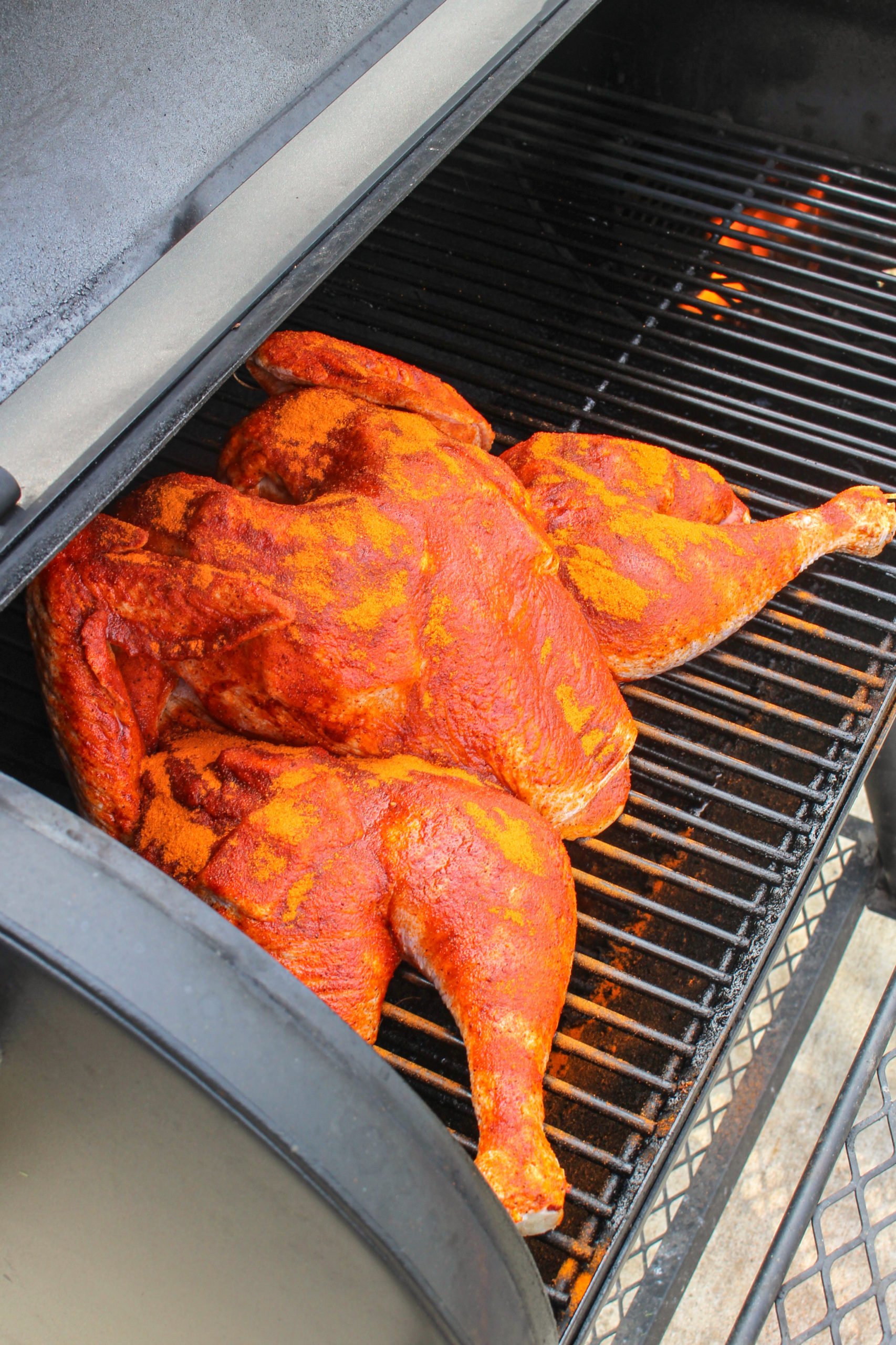 For another brining recipe, check out these Garlic Parmesan and Beer Wings. 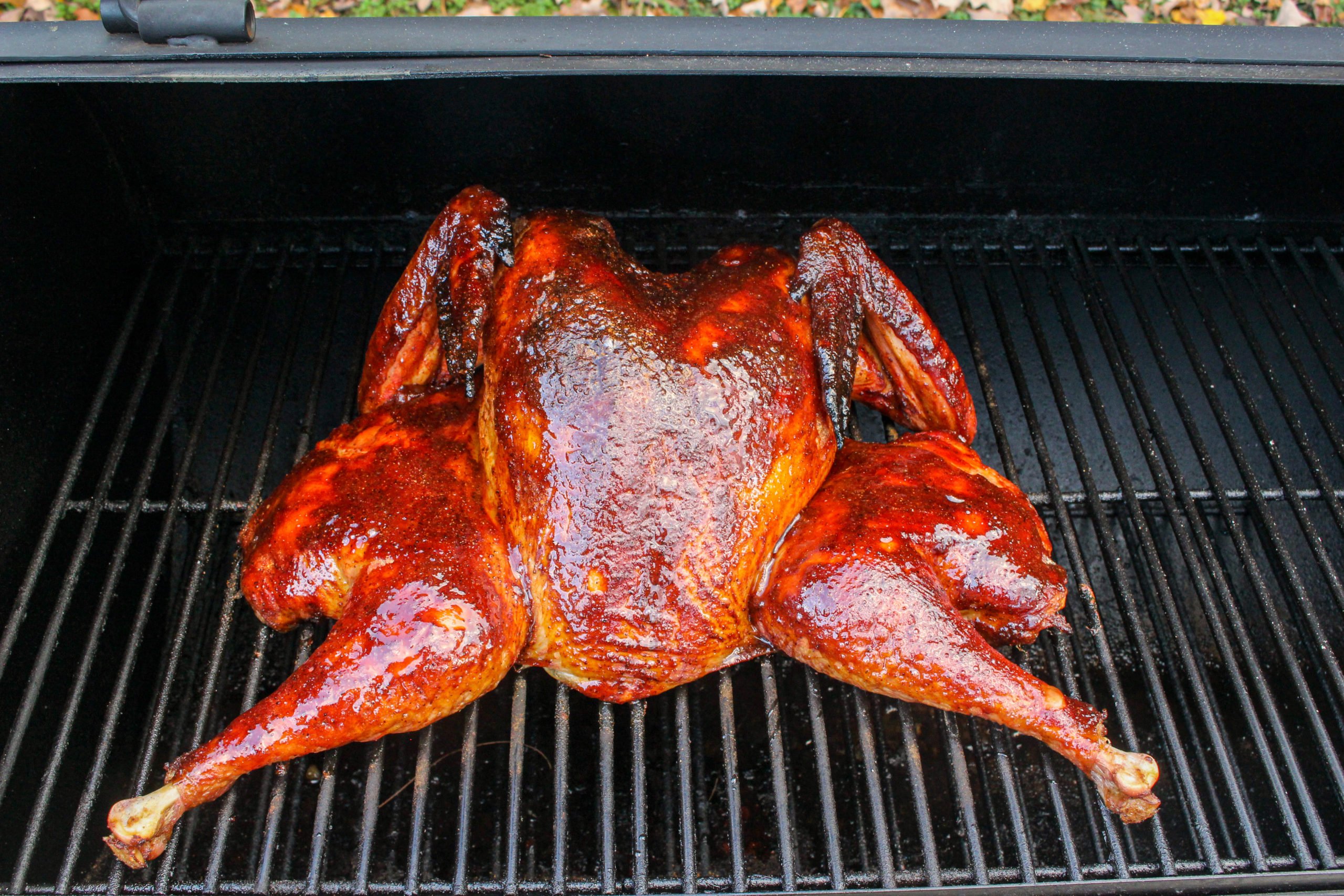 First brining, now spatchcocking. I’ve done a couple spatchcock recipes, but it’s been a while so let’s talk about it.

Spatchcock is a cooking technique that involves removing the spine from a turkey (or chicken) so that the protein will lay flatter on the grill/smoker. For this turkey, I cut out the spine, flip the turkey back over and position its legs to lay flat. This will help our turkey cook evenly.

From here, I used one of my favorite turkey tricks: placing slices of butter under the turkey skin. When you have a protein that doesn’t carry a lot of initial flavor, we need to add it. We’ve already brined the turkey to start this process, but now I’m going to add some fat because more fat equals more flavor. To do this, carefully lift up the skin and disperse thin slices of butter throughout the turkey. 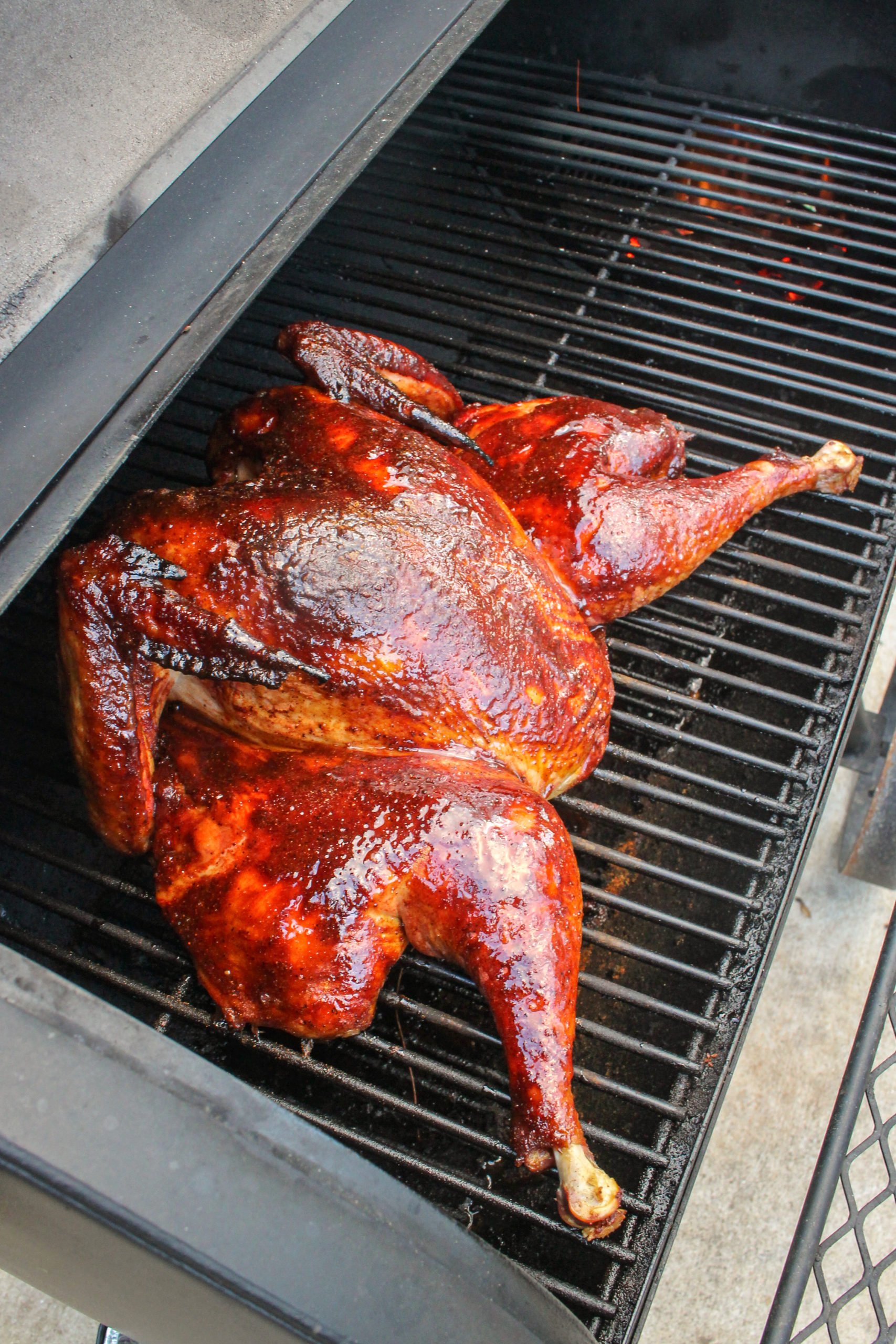 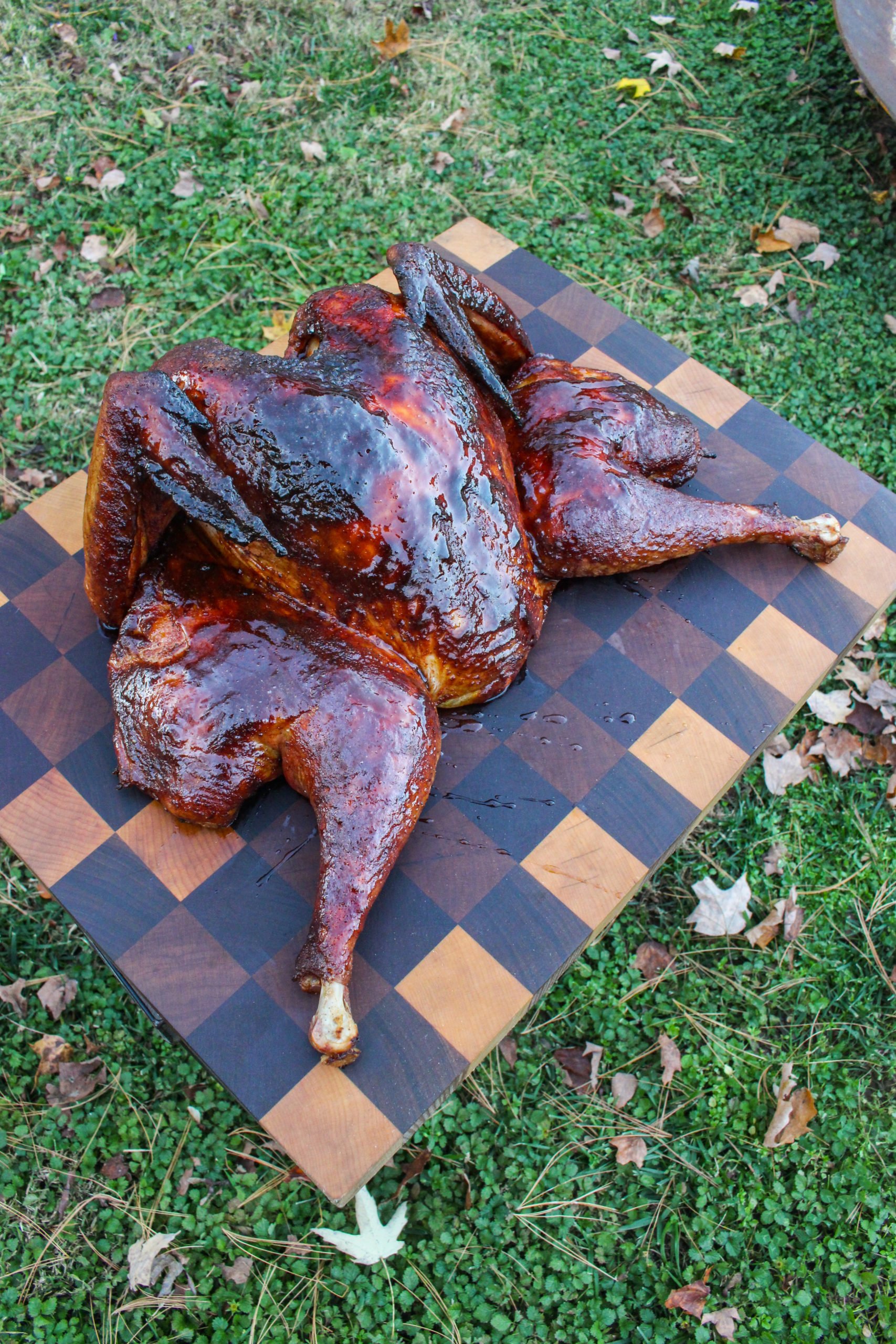 Next, we add our seasoning. I know I already talked about my awesome, limited edition Maple Bourbon seasoning so I’ll spare repeating myself; but just know it’s awesome. I covered the entire turkey with this stuff and have zero regrets. The sweet maple flavoring paired with caramel notes of bourbon was perfect for this turkey. Not to forget the sweet orange and cinnamon glaze we’re going to baste the turkey with. They’re a match made for eachother!

Place the turkey on the grill after it’s been seasoned. Close the lid to the smoker and let it cook for 2.5-3 hours, until it reaches an internal temperature of 165F in the breasts and thighs. While that’s cooking, go to the charcoal chamber and mix together the bourbon glaze. When the turkey is about 15 minutes out from being cooked, brush it entirely with this glaze. 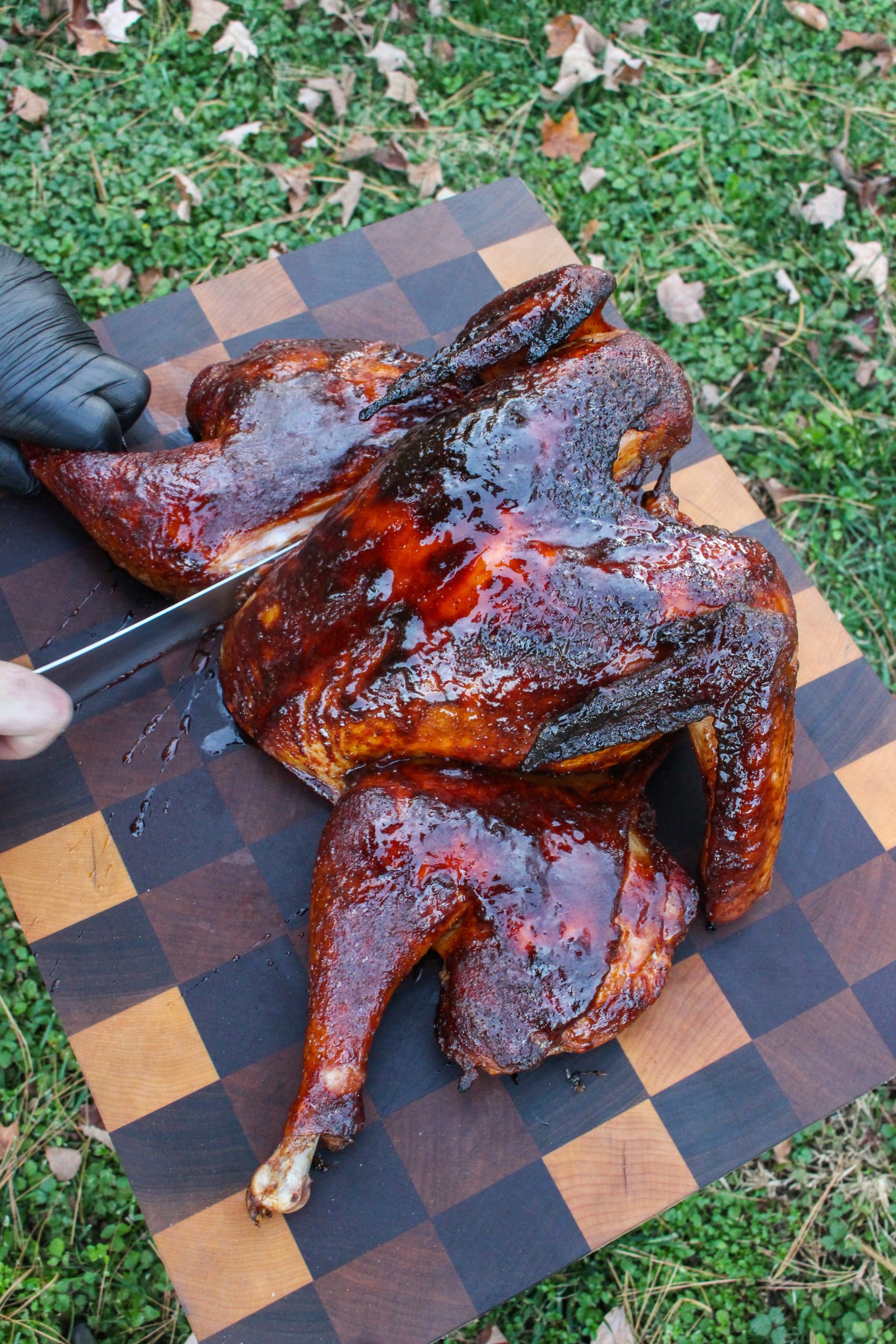 After the turkey has hit temp, pull it from the grill and let it rest for around 30 minutes. Then transition it to a cutting board or serving platter and serve it up! A beautiful, orange and golden brown turkey that’s extremely juicy and tender. As always, best enjoyed with friends and family. Cheers! 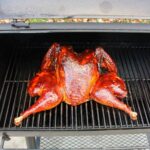