This is a taco burrito conversation… Nat – chos… Get it? Y’all, I created the most delicious Pulled Pork BBQ Nacho Table recipe, and who doesn’t want a TABLE OF NACHOS! Spent the day smoking two pork shoulders that were ready just in time for dinner. Check this recipe out, you definitely don’t want to miss it.

Smoking two pork shoulders is no joke, it’s an event. I woke up early to get this cook started. Pulled my two pork shoulders from the fridge and reached for one of my favorite rubs, Adobo Honey by yours truly. It’s a sweet and spicy combo that’s perfect for just about anything. It’s also bold enough to still be tasted after the pork is shredded, making it great for its future role on my BBQ Nacho Table.

I used spicy mustard as a binder before covering the pork in Adobo Honey on all sides. Then, I set it in the fridge while I waited for the smoker to reach temp. I threw some charcoal into the smoker and waited until it reached 250 degrees Fahrenheit. Once we hit temp, I pulled the pork from the fridge and set them in the smoker. Now, we wait… as patiently as possible. Grab your coffee, or bourbon… or both, knowing a Pulled Pork BBQ Nacho Table is on the way. 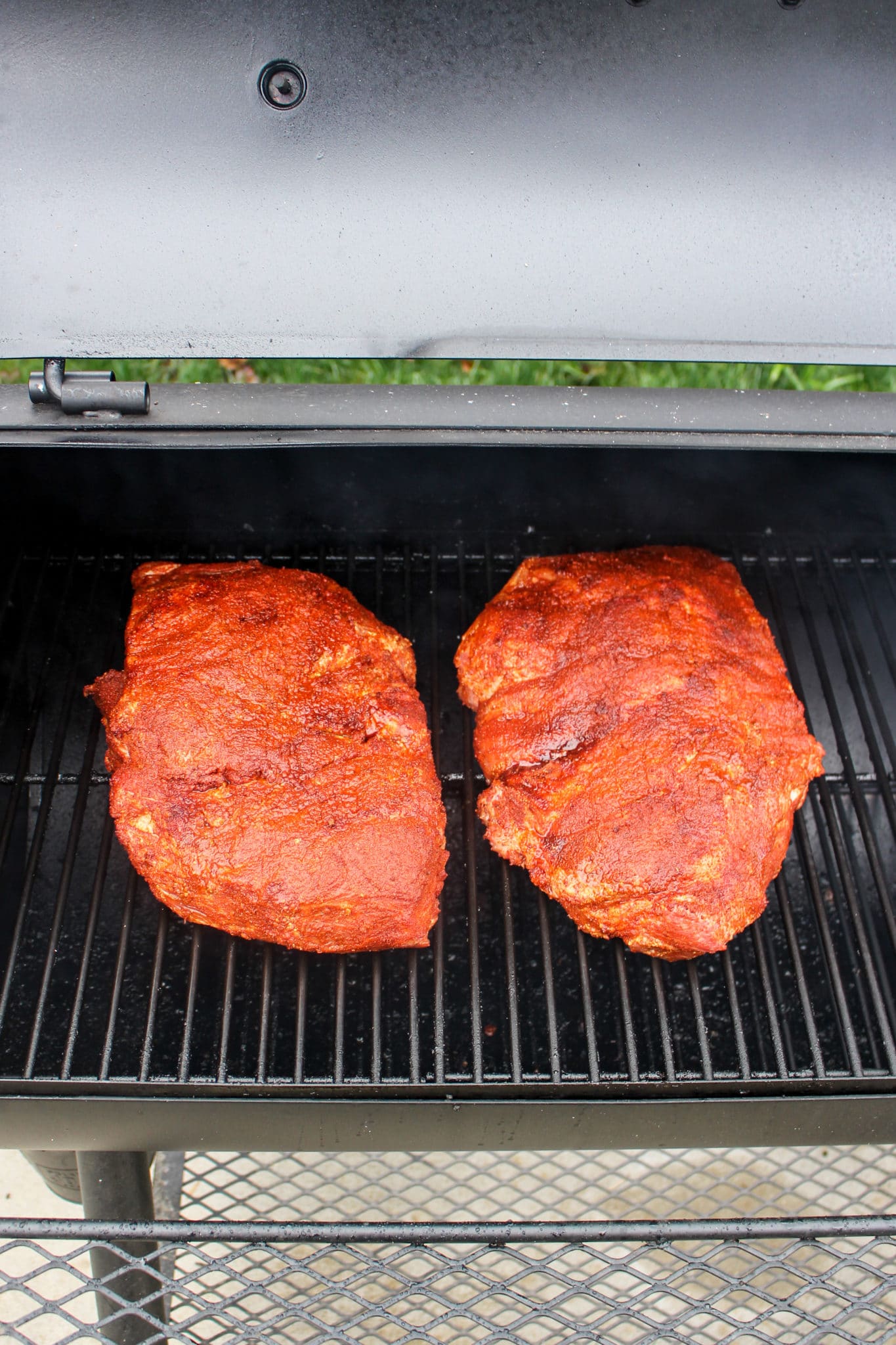 You’ll want to check on the pork periodically. Even if it’s just looking at the smoker to ensure your temperature stays around 250 degrees Fahrenheit. I also occasionally sprayed the pork shoulders with an apple cider vinegar and hot sauce spritzer. This helps the meat retain moisture while cooking.

I continued this process for about three hours, until the internal temp on the pork was 165F. Once the pork reaches 165F degrees it should be wrapped. This helps us break through the stall. I pulled each shoulder from the smoker and wrapped it in butcher’s paper. Place the pork shoulders back on the smoker. Let them cook for another 3-4 hours, or until they reach an internal temperature over 200 degrees Fahrenheit (ideally 203 degrees).

Pull the pork shoulders from the smoker once they’ve reached the proper internal temperature. Next, wrap them in a towel and place them in a room temperature cooler. This is the best way to let the shoulders rest. Leave them be for about an hour.

After an hour has passed, you can grab the pork and shred it! Now, time to assemble this Pulled Pork BBQ Nacho Table! Start with a base layer of chips and top with melted cheese and shredded cheese (because who doesn’t love double cheese). Pro-tip alert: I purposely put the cheese on the chips first. This will help hold the other ingredients to the chips! After the cheese I added the pulled pork, black beans, red onion, scallions, jalapeño, BBQ sauce, spicy ranch and cilantro. Finally, DIG IN! Best enjoyed with friends and family. Believe me, you’ll have more than enough to go around. Cheers! 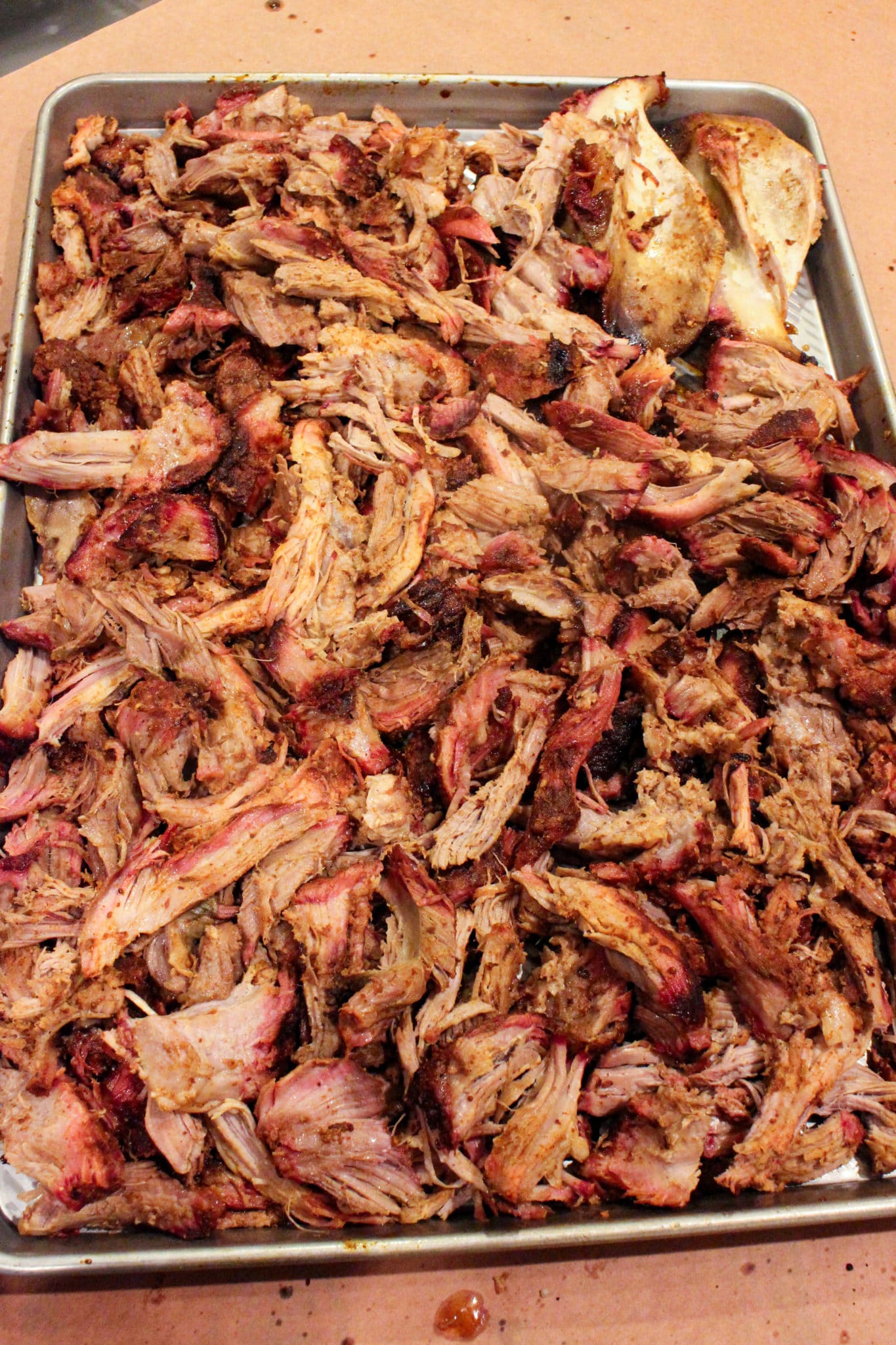 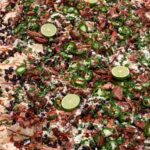