My wife and I get asked all the time what we do with all the food we cook. There’s only the two of us in our family, so it’s a safe assumption that we can’t eat ALL of the food we cook. Luckily, we have lots of extended family and friends that live close by that we share most of our food with! We also spend a lot of time turning one recipe into a different meal that can be enjoyed the following breakfast or lunch. That is where this recipe was born. From some of the leftover brisket we cooked up earlier this week, we have this BBQ Brisket Nachos recipe.

One thing that’s super nice about the recipes I develop is that most of them are focused solely on the protein. This makes it easy to pair whatever the protein is with different sides to get the feel of a different meal. Whether that is tacos, breakfast skillet or more, we love to entice a second look at previously cooked dish. In this case, we cubed up the remaining brisket and made BBQ brisket nachos!

Of course, I still did this over the fire 1) because the kiss of smoke it gives to the nachos is delicious and 2) I just love cooking with fire. I kicked things off by firing up my Breeo and letting my cast iron preheat. Try to let your cast iron preheat as it will give a nice sear to anything you’re cooking in it. From there, I let some butter melt in the pan and then tossed in the cubed brisket. I gave it a quick stir and then added in some pinto beans, chipotle purée and bbq sauce. I mixed all those together in the pan and continued to give it an occasional stir while letting everything heat up on the grill.

Once the beans and brisket warmed up, move it to a separate bowl. Give the cast iron a quick wipe down, and get ready to build the BBQ Brisket Nachos. From there I added a layer of chips, brisket and cheese. I then do it all again because who doesn’t love double layered nachos?

This is where I started to have some fun with this recipe! Finally, I covered the pan with aluminum foil for my “Cowboy Broil”. Swiveling the grill grate over the top of the pan, I placed hot charcoal on the grate to cook the food top down. This allows the cheese to melt and warmed the foundation of my nachos.

My Dad Ate Half the BBQ Brisket Nachos, so I Guess They Were Good

Melt the cheese and then pull the nachos off the heat. We garnished with onion, jalapeños, BBQ sauce, mexican crema, cilantro, lime and guacamole. Like I mentioned before, I love sharing the food I’ve cooked! I shared this meal with my dad that night, and he even ate the majority of them. We had a great evening cooking this together, and I hope you will too! 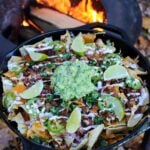 From some of the leftover brisket we cooked up earlier this week, we have these BBQ Brisket Nachos. Super easy and fun to put together so make sure to give it a try!
Prep Time10 mins
Cook Time20 mins
Total Time30 mins
Course: Main Course
Cuisine: American
Servings: 4 people
Author: Derek Wolf