Tired of the same ole, same ole chicken recipes? Well this Achiote Lime Brick Pressed Chicken recipe is anything but that! Spatchcocked, marinated and brick pressed; this bird was extraordinary. Then, I used some direct and indirect cooking techniques with my trusty Cowboy Charcoal to ensure this chicken was cooked to perfection! It was a bit spicy, a bit tangy and a whole lot of yum! Let me tell you how it all went down.

This is one of those recipes that begins the day before you cook it. That’s right, it’s marinade time! I’ve done several marinade recipes in the past, and if you haven’t checked them out I would encourage you to! I love marinade recipes because it makes dinner the following day a breeze! It also creates a depth of flavor that’s hard to achieve otherwise. All we have to do for this achiote lime brick pressed chicken marinade is take all the ingredients and toss them into a blender. Blend until smooth and then lather your chicken in it.

Speaking of chicken, let’s talk about spatchcock. Spatchcock refers to the removal of the chicken’s backbone so that it will lay flat as it cooks. This helps the chicken cook faster and more evenly. It also makes for a pretty photogenic chicken, so that’s a nice pro too. Once you cut the backbone from the chicken, flip the chicken over and gently (but also firmly) press down on the breast bone. This will help the chicken lay completely flat. I spatchcocked my achiote lime chicken before placing it in a large bowl and lathering it in the marinade.

For more fire food, check out my cookbook!

Bricks, Not Just for Houses Anymore

As the chicken continues to cook, pour some of the leftover marinade into a cast iron sauce bowl. Then, place the sauce bowl on the grill and bring it to a bowl. After it’s boiled for about 10 minutes, you can use it as a baste for the chicken. I basted the chicken periodically as it finished cooking to create an even juicier and flavorful meat.

Pull the chicken from the grill once it reaches an internal temperature of 165 degrees Fahrenheit. I set the whole chicken on a service dish and garnished with some sour cream and cilantro. Best enjoyed with friends and family. Cheers!

For more delicious flavors, check out my seasoning line! 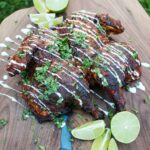