Loaded Huevos Rancheros Nachos for breakfast, lunch and dinner! I love huevos rancheros and was excited to make a nachos version. Really, turning any dish into a nachos dish sounds like a win to me! I seasoned up some pulled chicken and baked these nachos in a cast iron over the fire. They were super delicious and definitely something you’ll want to try!

Literally translated as rancher’s (like the farm, not the sauce) eggs, huevos rancheros consist of eggs topped with salsa sitting on a couple corn tortillas. One great thing about huevos rancheros and nachos is that you can mix and match a ton of different ingredients for a slightly different dish each time. This is one of the many reasons I love this dish. There’s so much room for creativity, whether you’re trying to be creative or just trying to clean out the fridge. For this recipe, I switched out the typical corn tortillas for corn chips. It’s an easy swap and perfect for my nacho switch up!

I also used one of my favorite tricks for these Loaded Huevos Rancheros Nachos. The secret is to layer the chips and cheese while building your nacho foundation. Don’t you hate it when you get through the top layer of nachos and there’s hardly any toppings left? Not the case when you layer the cheese in. It’s super easy! I start by laying down a thin layer of chips and top with cheese. Then I place that in my fire oven for a minute to let the cheese melt. Next, pull the skillet out from the fire oven and do another thin layer of chips. Cover that new layer of chips with cheese and place it back in the fire oven for another minute until the cheese on top melted. Repeat this process as often as you like until you have all the chips you want for your nacho foundation. 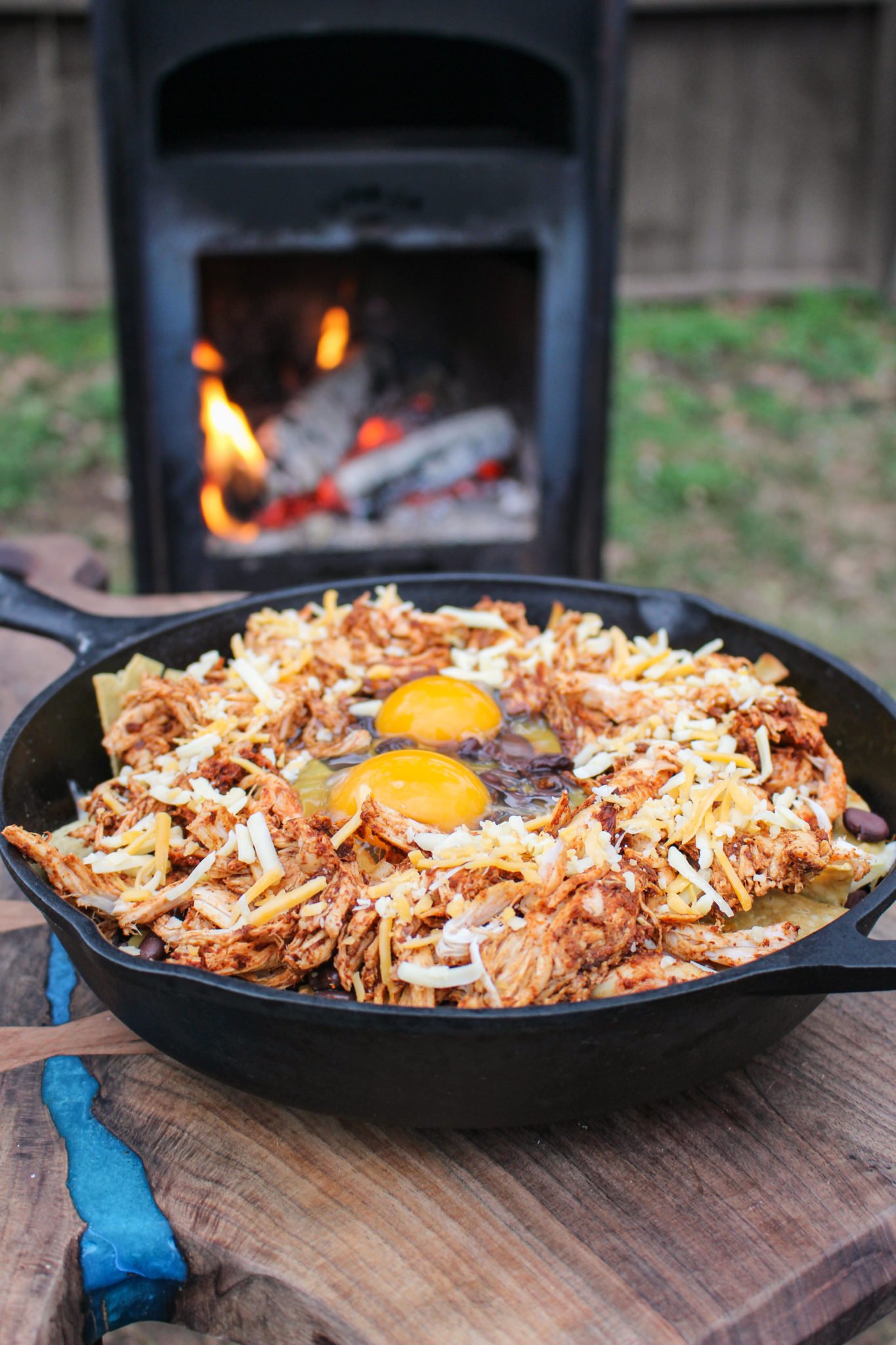 Let’s move onto the protein portion of this dish. For my Loaded Huevos Rancheros Nachos, I seasoned up some pulled chicken with chipotle purée and achiote. On top of the chips and cheese layer I added some black beans and then the chicken. I sprinkled the beans throughout the nachos, but placed the chicken in a circle around the outside of the nachos. I left the center open for the main star of this recipe, the huevos. Once the chicken was perfectly placed, I dropped in my two eggs and sprinkled some cheese over the top of the entire dish. Then, it’s back to the oven for this skillet.

It won’t take long to cook. All you’re really doing here is warming up the chicken while the eggs cook in the middle. When the eggs are done, pull the skillet out from the fire oven. Now, top with your favorite nacho toppings. For my Loaded Huevos Rancheros Nachos, I started with a layer of Mexican crema and then sliced red onion, jalapéno, scallions, cilantro, pico de gallo and guacamole.

Time to eat these Loaded Huevos Rancheros Nachos! I served this dish directly out of the cast iron skillet it was cooked in, less dishes for me is always a good thing. As always, this dish is best enjoyed with friends and family. Cheers!

Spice up your life with some of my seasonings! 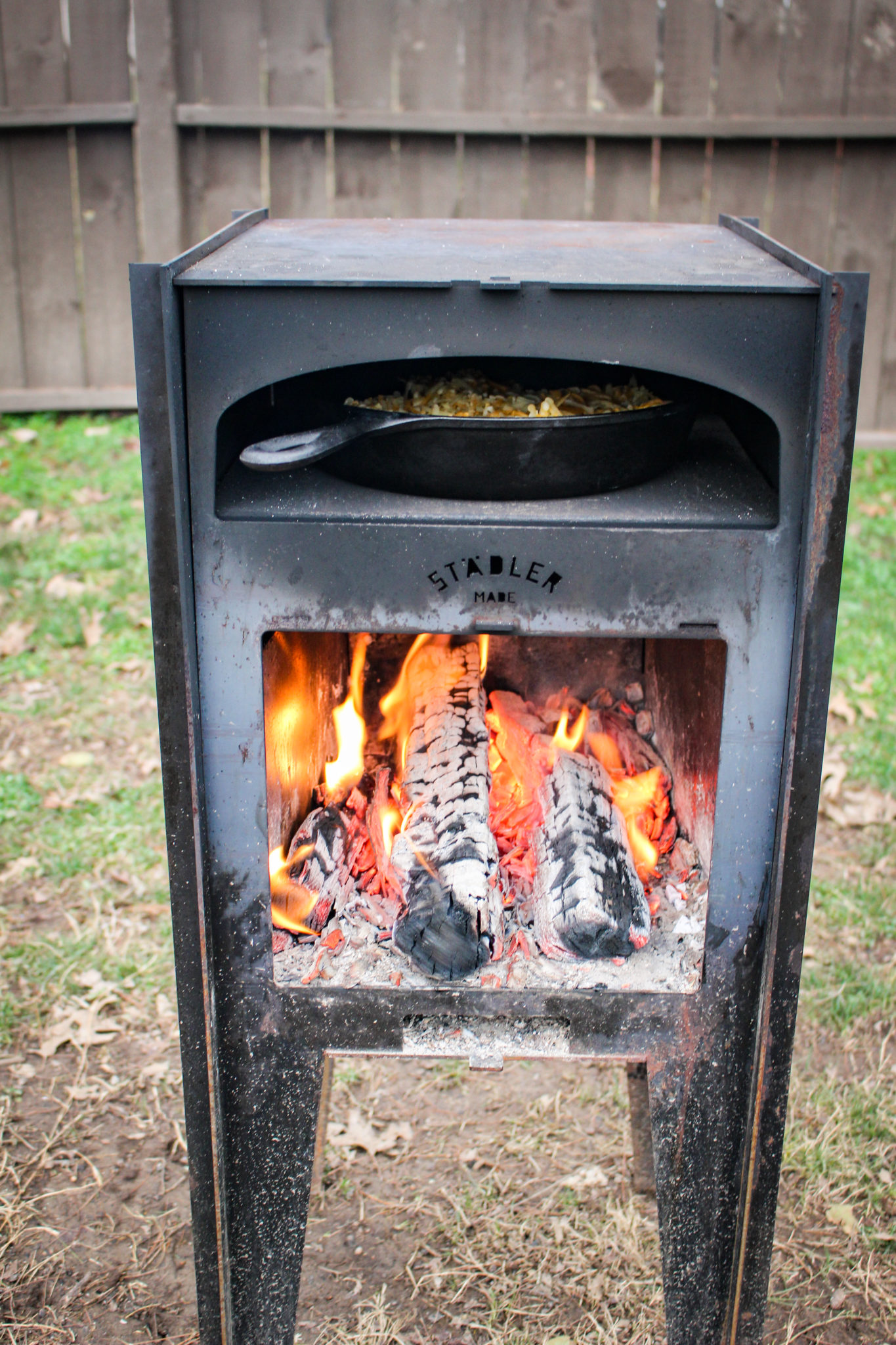 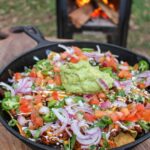