This Bourbon Bacon Chicken Wings Recipe came to me this morning during my daily mediation, I’m super into meditation. I do it for like 8 hours every night…. Well, I guess I was just sleeping and then my spirit animal, Ron Swanson, came to me in a dream and told me to wrap things in bacon. This modern man’s twist on the classic The Swanson (bacon wrapped turkey leg) will put a little razzle dazzle in your step. Bourbon infused every step of the way, these smoke fried wings will make you wish you were at a competitive eating competition.

Give Me All the Bourbon Bacon Chicken Wings

First step of this glorious process: bacon wrapping. Now wrapping things in bacon has got a dubious rap as of late. That’s not the bacons fault, so don’t go blaming the victim. Wrapping things in bacon is a time-honored tradition. Pretty sure the Vikings invented it. It adds a salty/fatty element to the dish while keeping flavor locked in during a long cook. The important thing is, you have to cook everything to a safe temperature. Here we are cooking chicken wings, they have a food safe temp of 165 degrees internal. At that temp pork is also safe to eat. So, you heard it here first folks, wings + Bacon = Flavortown.

Speaking of bacon wrapped food, have you tried my Honey Bacon BBQ Chicken Lollipops, because I think you’d love it! For more bacon wrapped deliciousness, you can also check out my Bacon Wrapped Honey Cajun Pork Tenderloin and Ribeyes and Bacon Wrapped Scallops recipes. 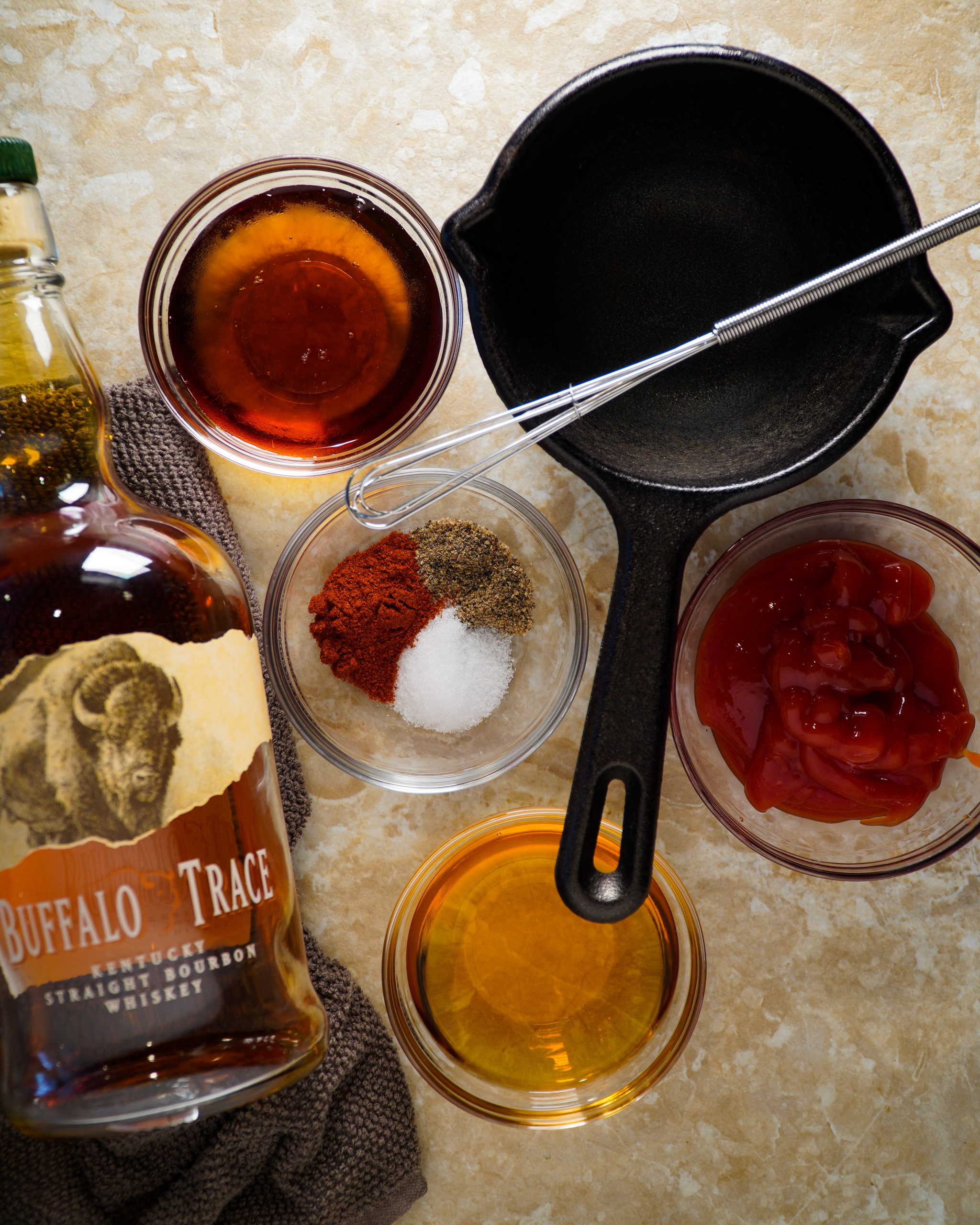 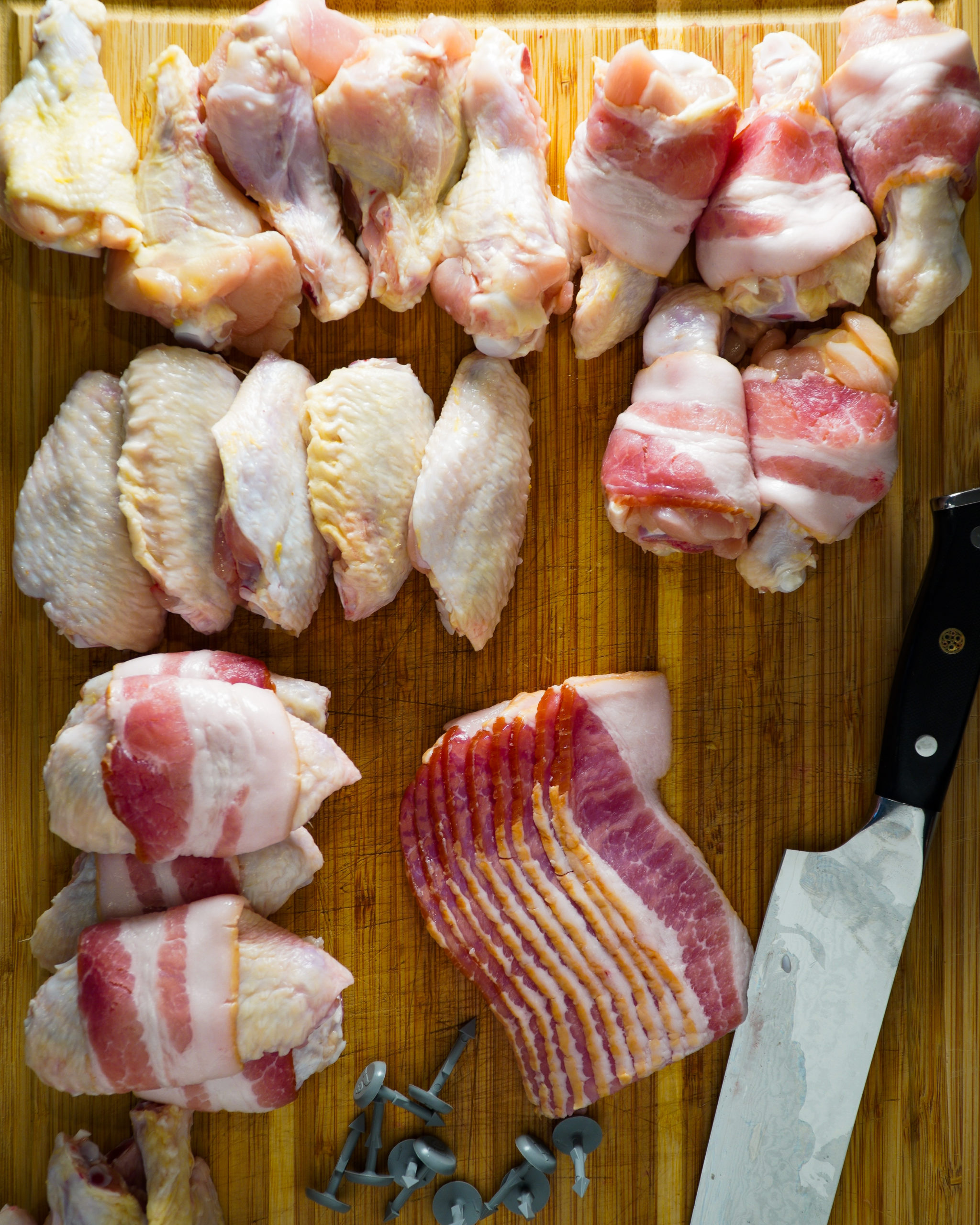 If you’ve had wings that have only been slowed smoked, then you know the pain in which I write this. Fat that hasn’t rendered, skin that just isn’t crispy. We’ve all been there, it’s not a good place to be. It’s literally the DMV of food.

Chin up, because I have a cooking method for you: The smoke fried wing. Smoke the wings first to take on that barbecue flavor, then deep fry them to finish off. Smokey yet crispy! This method is crucial for this recipe. We’re bacon wrapping, adding more fat to be rendered. The bacon is protecting the chicken skin under the bacon, so we need the power of deep frying to overcome this.

A word on temp. Wings are technically safe to eat at 165 degrees internal. But being a fattier cut, they do very well at higher temps. Much like pulled pork or brisket, chicken wings become fall off the bone tender around 195 degrees internal. For this recipe, I smoked them to 175 degrees and then finished them in the fryer to the 195 degrees. 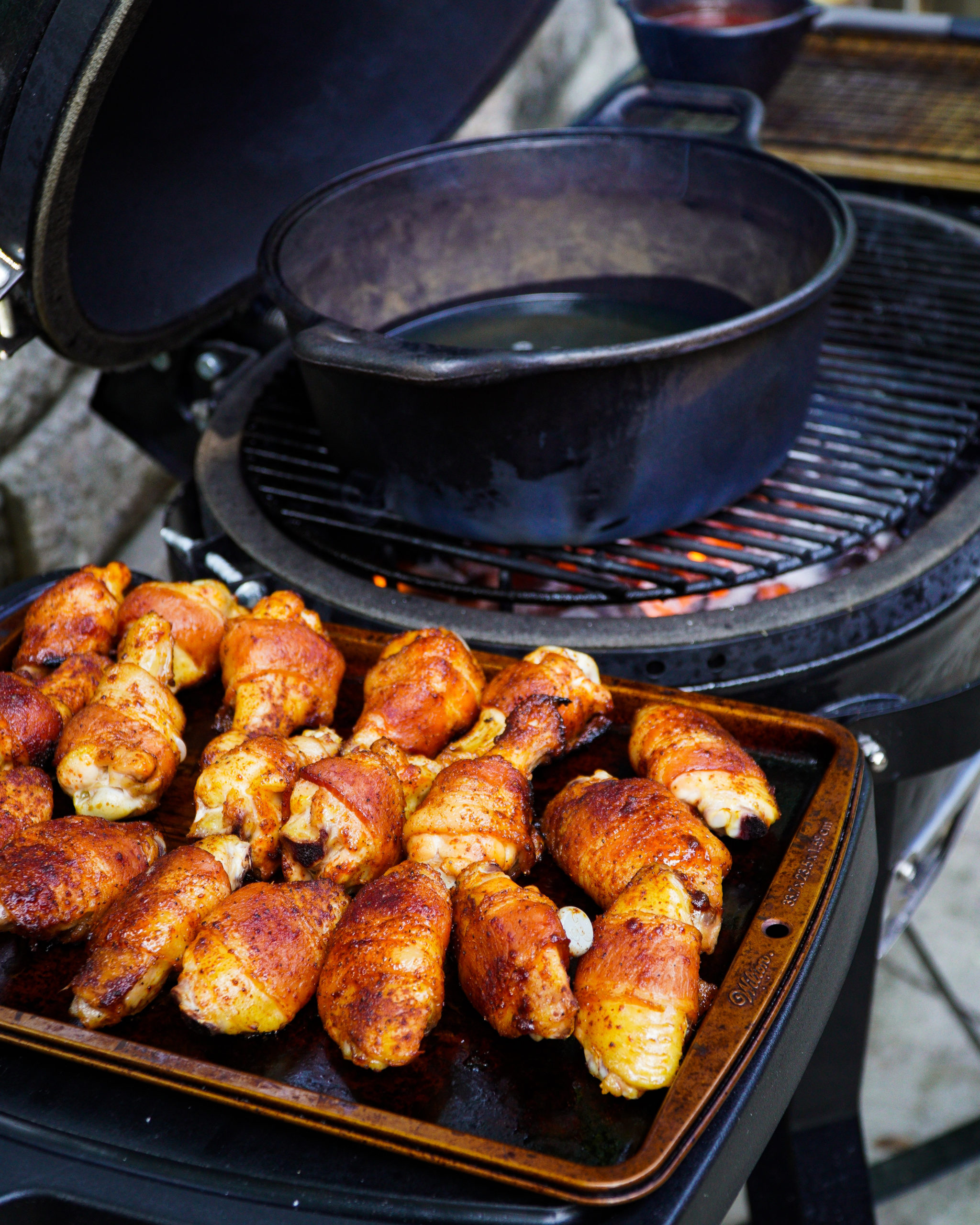 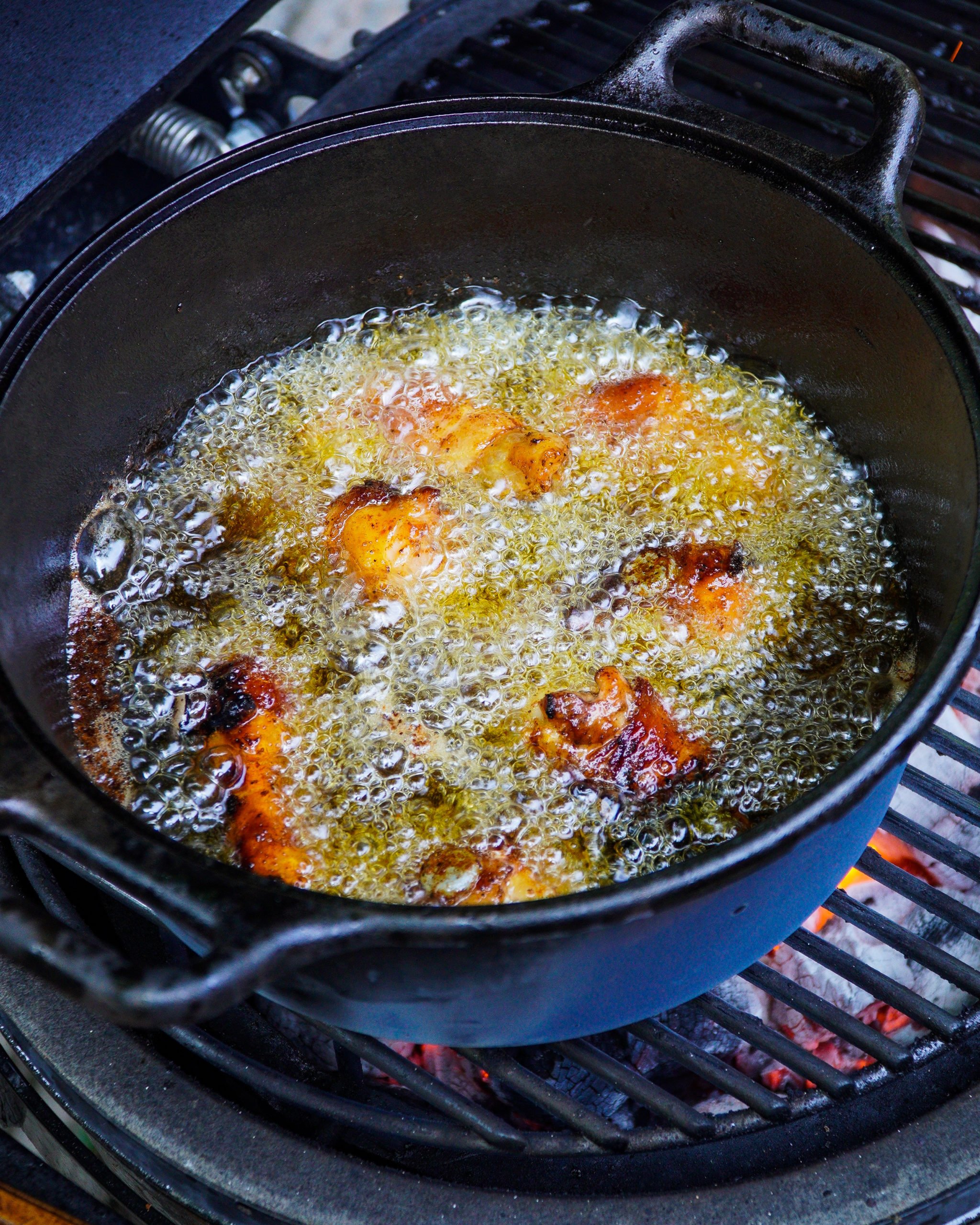 I saved the best for last. If you’ve made it this far, time to claim your reward. Pour yourself a dram of bourbon. We all know what the secret ingredient in every kitchen is: alcohol. A little for the cook, a little for the recipe. Nice and fair, just as the good lord intended it to be.

While the Over the Fire Cooking’s Maple Bourbon Rub adds a pop of flavor to the chicken wings, we don’t stop there. Time to make your own BBQ sauce. Maple Bourbon BBQ Sauce. It is known that we love Buffalo Trace around here, so that’s what we’re using. Imbibing those aged charred oak flavors directly into our sauce. No shortcuts, just big flavor. 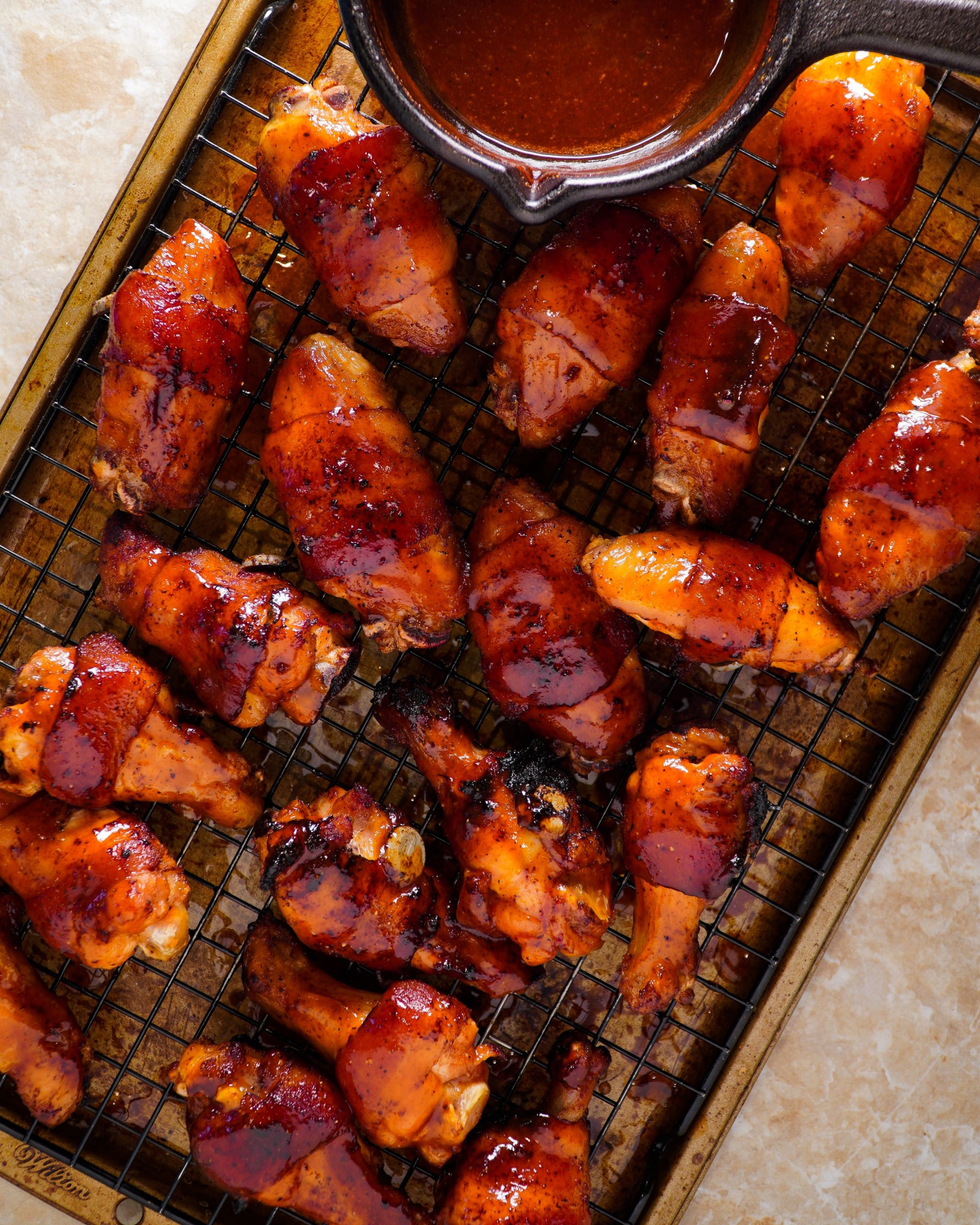 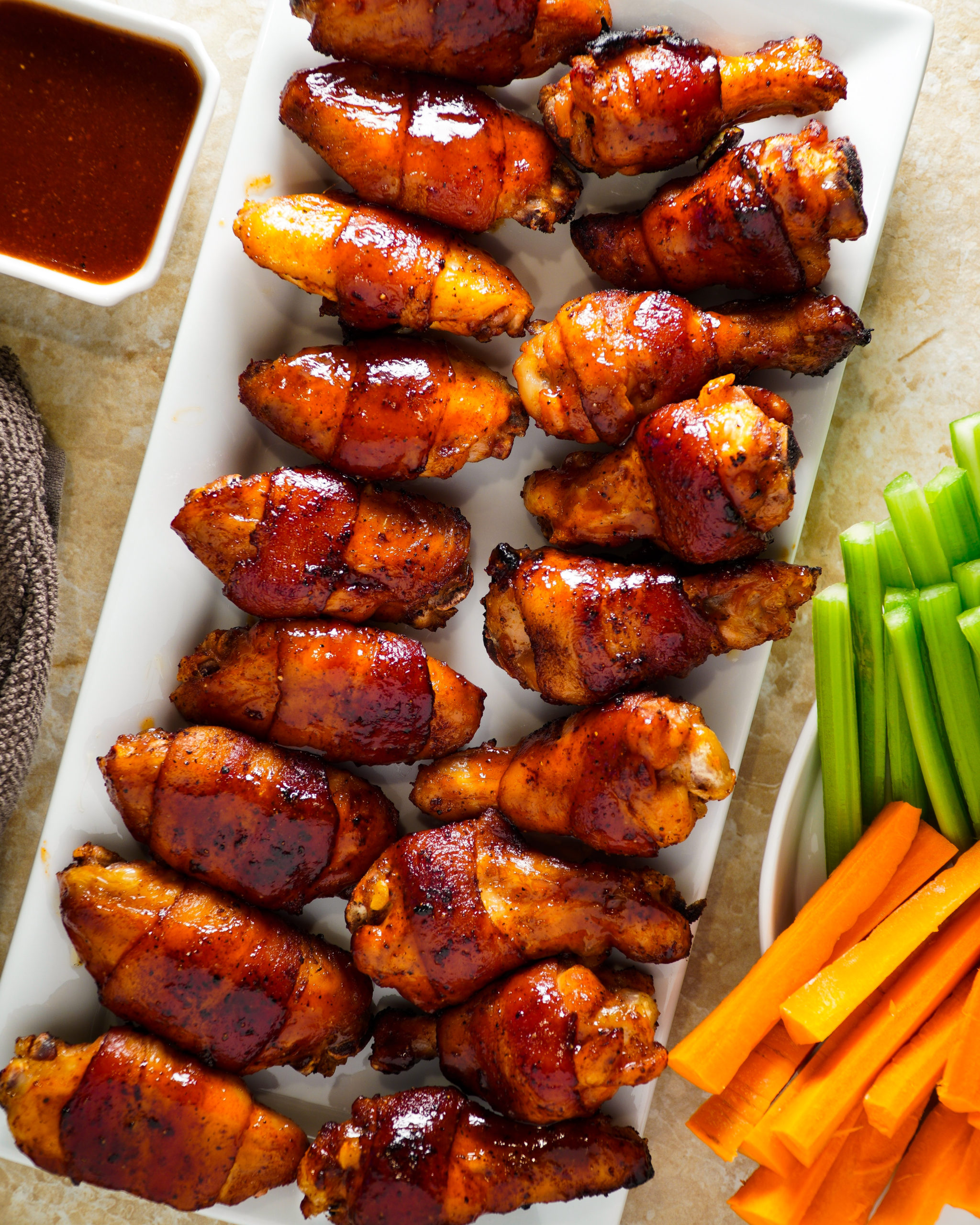 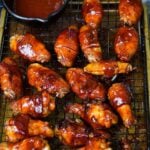 Jeremy is a small business owner by day; a private chef to a wife and two kiddos by night and creator behind The Kitchen Whitelaw. Specializing in new American cooking, diner fare, country club cuisine, the classics you know and love. Exploring new recipes, creating new dishes, and teaching new techniques.