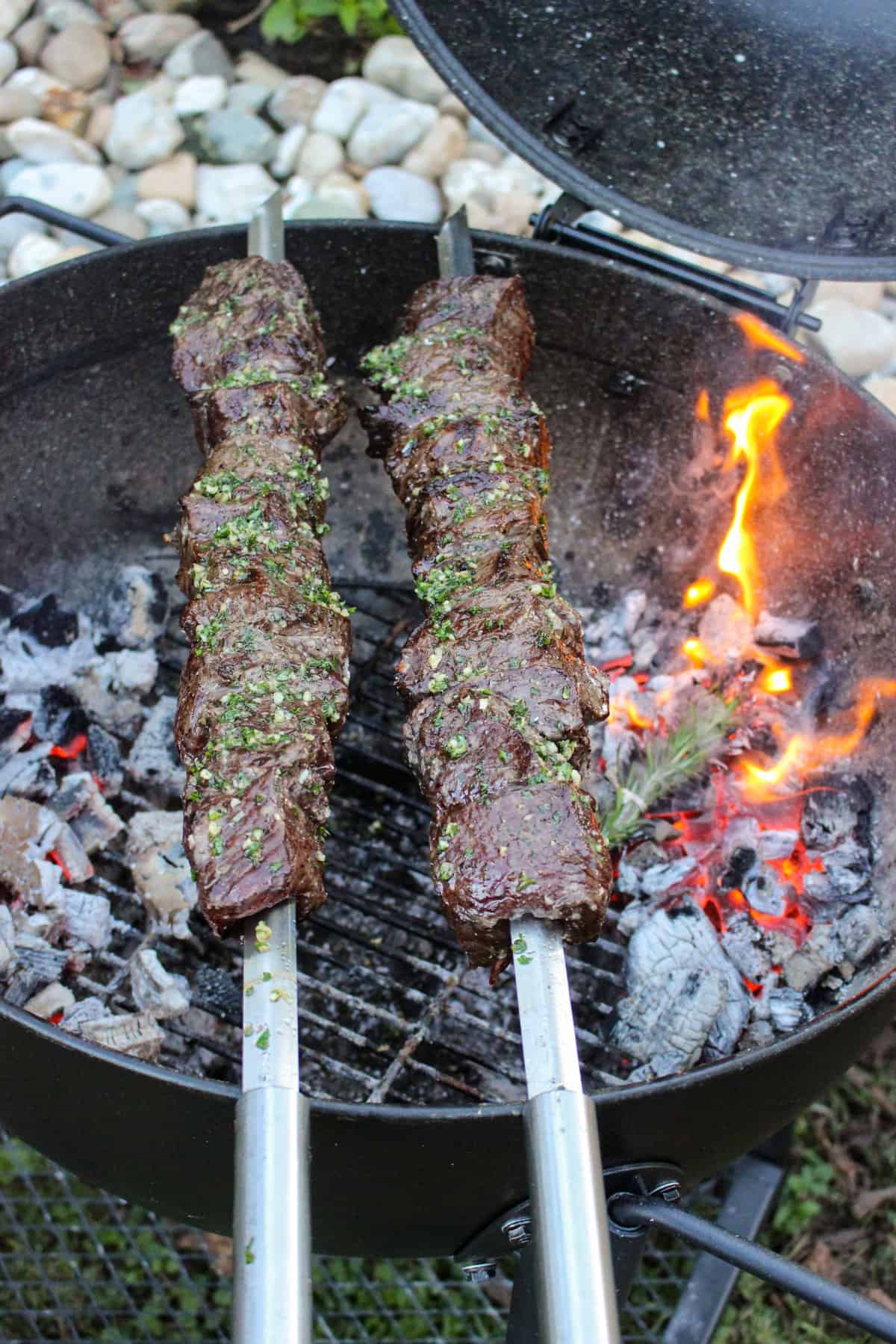 Garlic Basted Sirloin Skewers are our favorite, classic flavors served in a fresh way! Not saying that skewering steak is a completely new idea, but there’s just something fun about grilling large chunks of sirloin on two big skewers over the fire. I actually started with one large sirloin roast and sliced it down into cubes from there. I basted these skewers with some beef tallow, garlic and habanero sauce as a delicious way to finish these lean pieces of meat. Twenty minutes later, dinner was served!

From Sirloin Roast to Sirloin Skewers

As I mentioned, I started this Garlic Basted Sirloin Skewers recipe with one large sirloin roast. I took that roast and then sliced it into four large steaks. The benefit to buying a sirloin roast instead of steaks is that it allows you to control the width of each slice of steak. Since we’re shooting to have relatively even cubes of steak, being able to break it down from the get go is really nice. It allows us to cut cubes of steak instead of rectangular pieces.

After slicing the roast into four individual steaks, I continued to break down the steaks into cubes. Again, trying to make them as similar in size as possible because that will help the cubes to cook more evenly and at the same pace. Start seasoning the steaks once the sirloin has been cut into cubes.

I seasoned the steaks with a bit of oil, salt and pepper. I kept this extremely basic because I want our garlic baste to be the star of this recipe. The salt and pepper kick us off in the right direction, but it’s the garlic baste that will bring it all home. I poured the oil, salt and pepper across the top of the sirloin on a cooking sheet and hand mixed it to ensure an even coating on all sides of the steak. Then, I grabbed the skewers and began to skewer each piece until I was out of sirloin and both skewers were full. Now, to the grill. 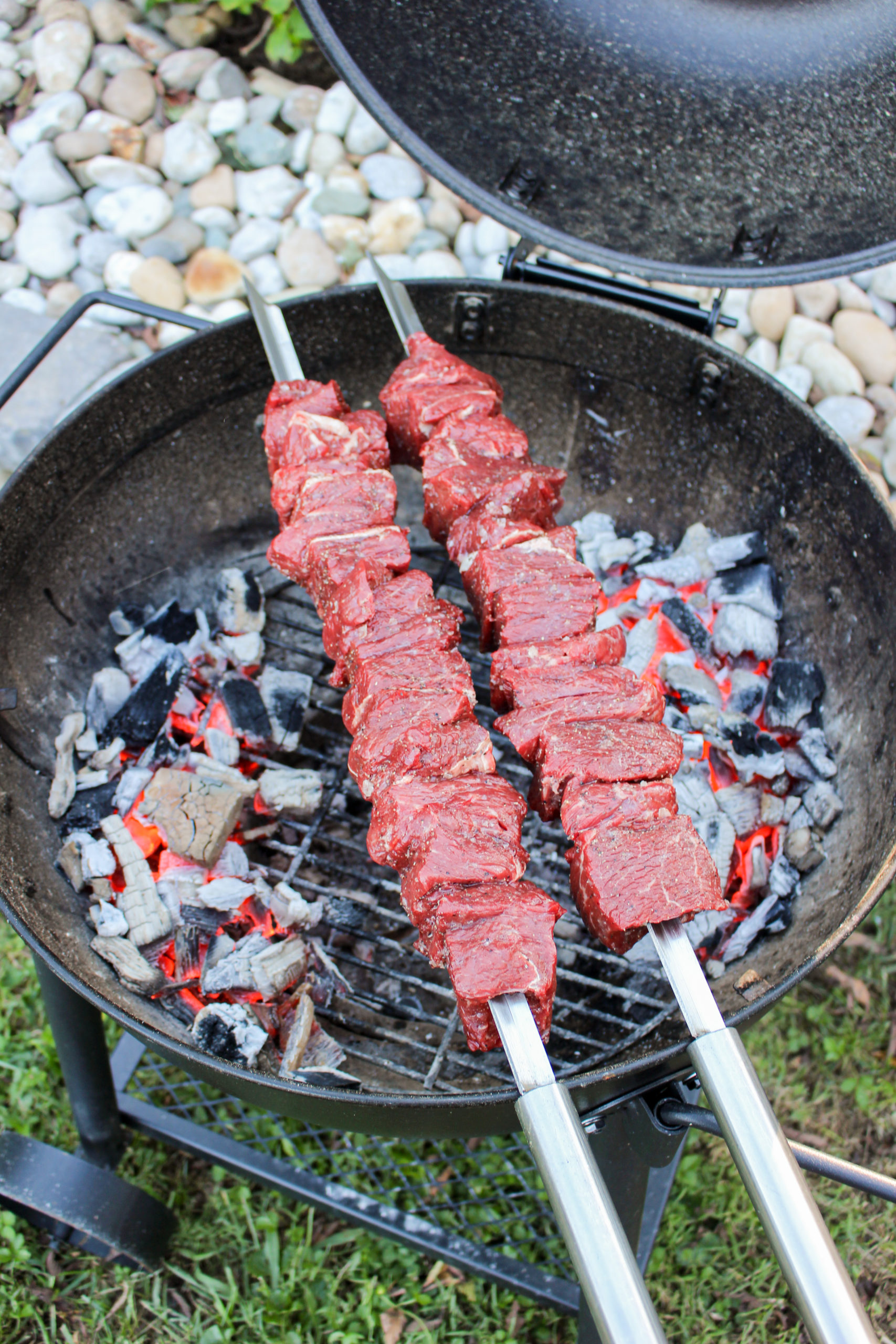 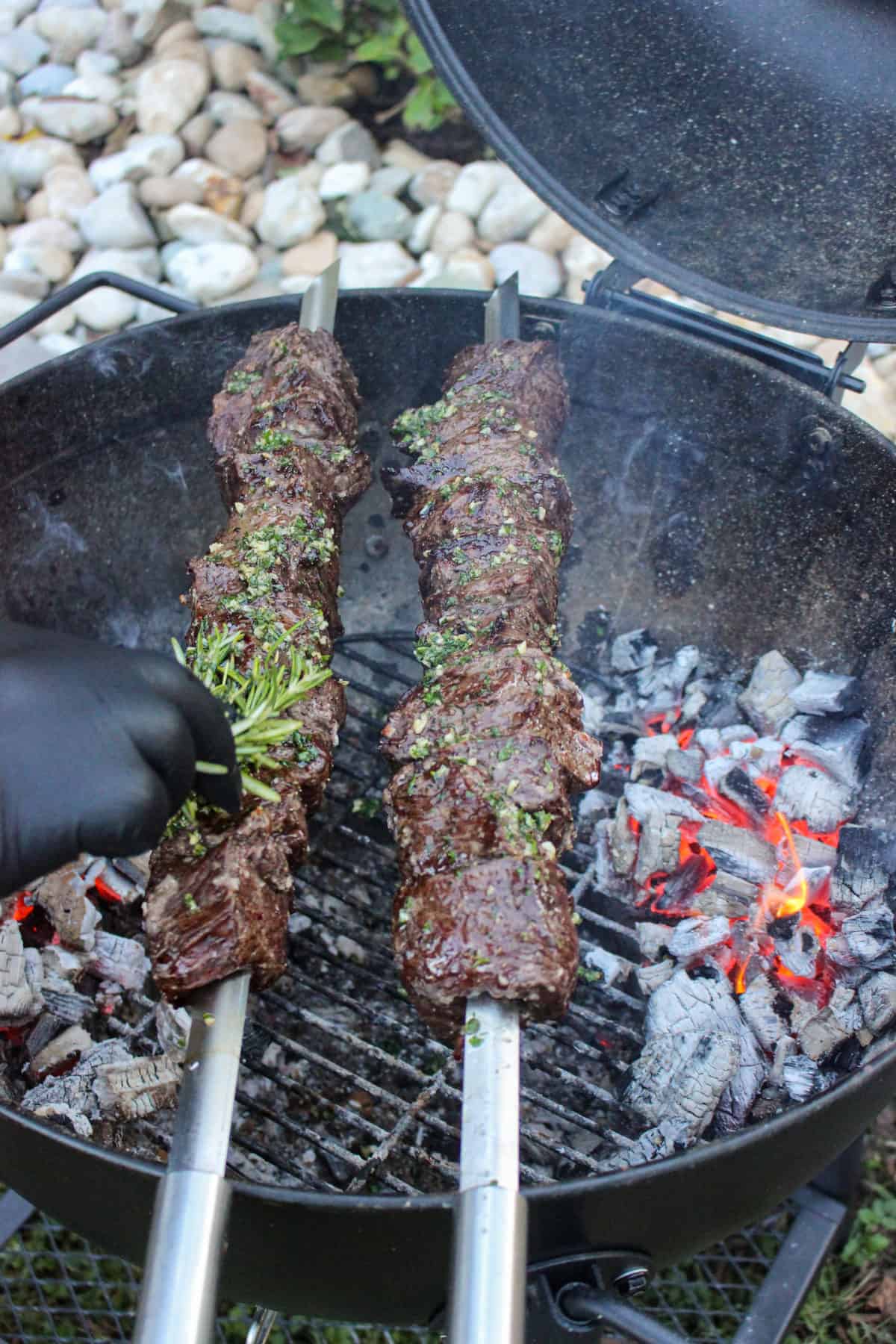 You might think that from here we’ll put the sirloins on the grill, but we’re actually going to pivot to our garlic baste first. This is because we’ll need it shortly after putting the skewers on the Oklahoma Joe’s Blackjack Kettle Grill so we’ll want to make sure it’s ready to go.

Start making the garlic baste by placing a cast iron sauce bowl next to the hot coals. Next, add the beef tallow and let it melt. Beef tallow is rendered fat from beef. It’s very similar to lard, but lard is rendered pork fat. When cooking really lean cuts of meat (like this sirloin) it’s always a good idea to add some kind of baste into the mix. Fat brings flavor, so beef tallow, butter, or any other type of fat is always a winning idea.

After the beef tallow melts, add in garlic and habanero sauce. Let those ingredients boil for a bit and then remove it from the heat. Now, add on the sirloin skewers and close the lid on the grill.

Now, pull them from the fire and let them rest. Finally, remove them from the skewers and slice them up. I served mine directly from the cutting board. Best enjoyed with friends and family. Cheers! 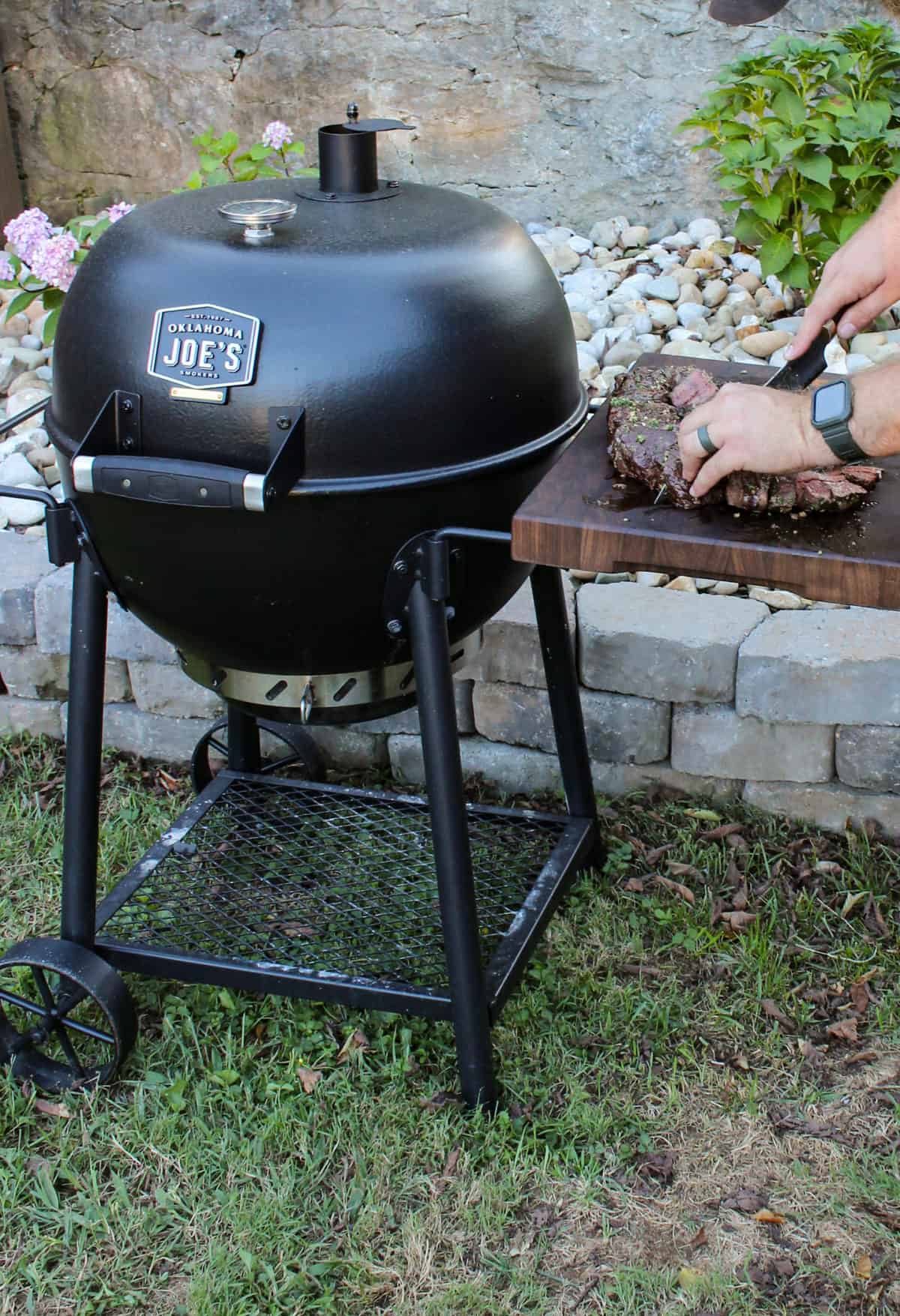 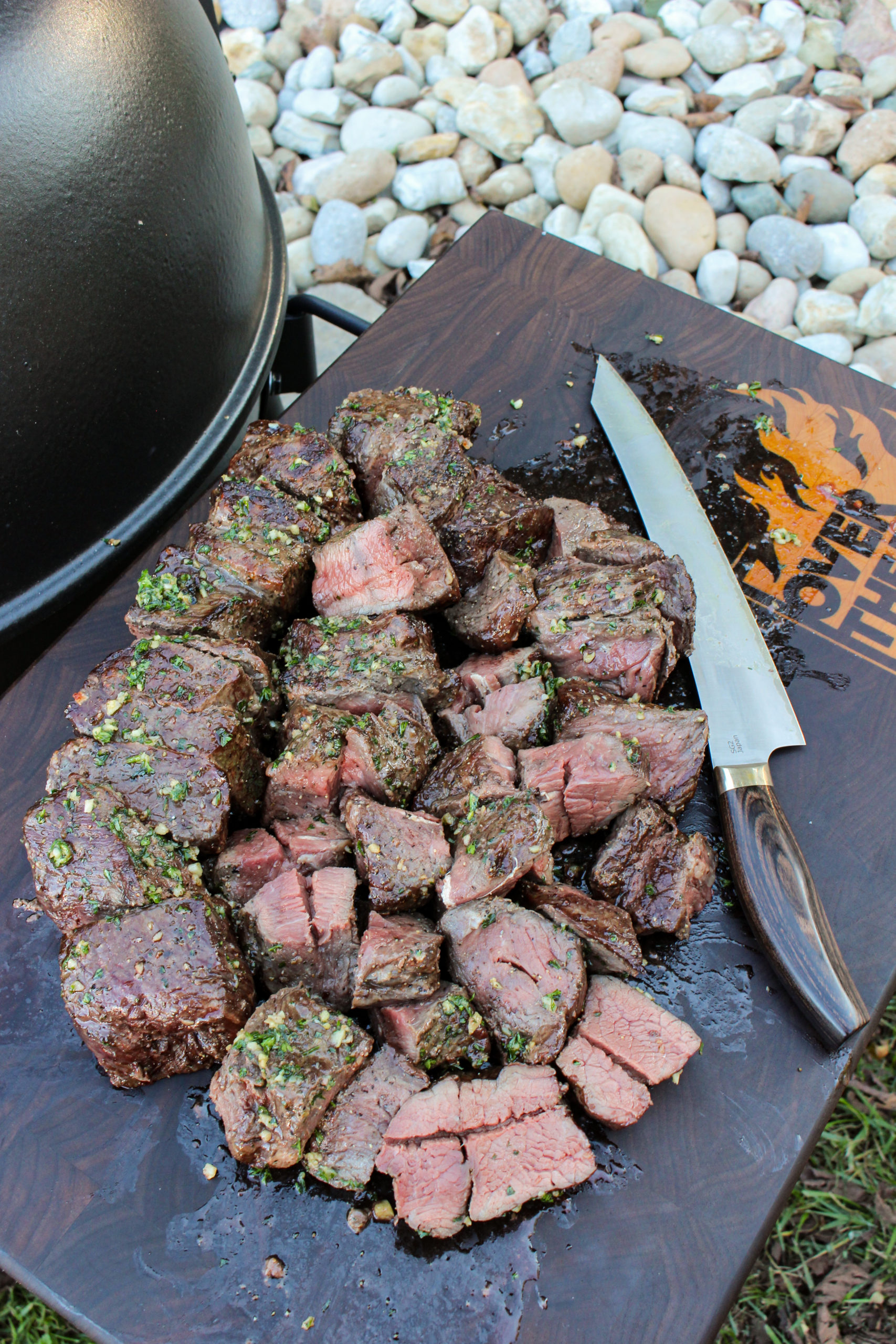 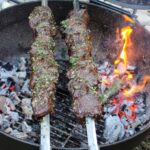