I don’t know who was the first person to want to try grilled lobster tail, but they are a genius. The hearty meat from these seafood kings is delicious, especially when you add butter and fire! Knowing how to grill a lobster tail is very easy to learn and can be used to impress anyone that comes over to try your fire cooked food.

Hey, you could even make these this Sunday for the next Game of Thrones episode! Either way, I am sure that my fire cooked lobster tail recipe will make everyone name you King of the Grill.

How To Grill A Lobster Tail

There are a ton of ways for cooking lobster tails. In my Grilled Lobster Tail recipe, you actually will split the lobster in half from the back. This will allow the meat a wider spread to cook so that everything is evenly placed on the grill.

You can definitely cook this way if you like! You can also grill them with the flesh pulled out!

My only tip for cooking the grilled lobster tails is to add the melted butter sauce! The chive butter sauce below is one of my favorites to add on seafood. Butter makes steak, seafood, and more better.

In fact, adding sauce to anything is delicious! While the chive butter sauce is totally optional, it makes lobster tails incredibly good. Definitely make the Grilled Lobster Tails with a decent amount of butter on top!

Should I cut my lobster tail before grilling?

We cut the lobster shell with kitchen sheers for this recipe to fold open the shell and expose the meat it so it will cook evenly, and we can baste the meat at the same time, adding amazing flavor!

Which side should I grill the lobster tails on?

We grill flesh side down for the initial sear to begin and finish with the lobster meat exposed up and the top of the shell on the grill grate, as the meat cooks through to avoid burning or overcooking it.

Do I need to boil lobster before grilling?

No, there is no need to boil the lobster before grilling. The meat cooks through over the open fire.

How long do I need to grill lobster for?

You want to cook lobster until it reaches a safe internal temp of 140F with a digital thermometer.

Can I cook my lobster from frozen?

We don’t recommend cooking a frozen lobster. One it takes longer to cook and risks burning, two as the meat thaws it adds unneeded liquid to the grilling process and it just makes for a bad experiance. 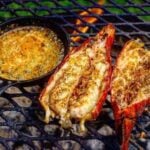 Whole lobster tail grilled over fire with an herb butter sauce to baste.