These Grilled Beef Short Ribs with Chimichurri Butter are grilled on my Breeo Y series until juicy and tender, drizzled with homemade chimichurri butter, then served with crispy smashed potatoes.

Okay, first let’s go over what chimichurri even is. Traditional chimichurri is a sauce or marinade of sorts that made with oil, vinegar, herbs, and spices. Chimichurri butter is just that but infused into butter. It’s so rich, tangy, flavorful, and perfect on grilled beef short ribs!

To make your chimichurri butter, simply mix butter, chopped parsley, red wine vinegar, olive oil, dried oregano, and red chili flakes in a bowl. Add salt to taste, then set the butter in the fridge until you’re ready to use it.

If you love this recipe with chimichurri, then you’ll love my Steak and Eggs with Charred Scallion Chimichurri, Spiced Lamb Kebabs with Mint Chimichurri, or Brazilian Steaks with Habanero Chimichurri.

Next up, the potatoes! Now, this part is totally optional as it’s not technically a part of the Grilled Beef Short Ribs with Chimichurri Butter recipe. BUT I highly recommend whipping these up. They’re so good and are a great way to round out your meal. We can call it Grilled Beef Short Ribs with Chimichurri Butter…and Smashed Potatoes. Rolls right off the tongue!

First, boil some golden potatoes in a pot of water until they’re soft enough to be easily pierced with a fork.

Pull the potatoes out of the hot water and set them onto a clean work surface. Use the bottom of a plate to “smash” the potatoes into flat discs, then set them aside.

Cook and Baste the Steak

Next, let’s cook! I’m using, of course, my Breeo Y Series, because we all know it’s my favorite. It also utilizes lump charcoal which makes slow roasting beef short ribs as easy as could be!

Preheat your grill of choice to a medium heat of about 300ºF for direct cooking. You may need to raise the grill grate higher so you don’t burn the Grilled Beef Short Ribs with Chimichurri Butter.

Now, let’s talk about the baste. You can easily mix together the basting liquid as the steaks are cooking for maximum efficiency. To make the basting liquid, add a skillet onto the grill, then mix in olive oil, smashed garlic, and red wine vinegar. That’s it! Now onto the steak.

Add the short ribs over the flames and allow them to cook for roughly 25-35 minutes, flipping and basting every 4-5 minutes. Check the internal temperature after 25 minutes, then add time as needed. It should be 130-135ºF.

If you did boil and smash potatoes to go with your Grilled Beef Short Ribs with Chimichurri Butter, it’s time to finish those up.

To cook the potatoes, simply add them onto the grill and baste using the same oil you used for the steak. Cook for 2 minutes on each side. Once they’re sufficiently crispy, pull them off and let them cool for a couple of minutes.

Now, of course, it’s time to put together our meal and EAT! 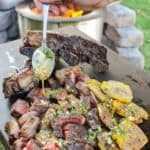 These Grilled Beef Short Ribs with Chimichurri Butter are grilled until tender and served with crispy smashed potatoes.