New York Strips with Bourbon Mushrooms to warm you up on a cold, Colorado day. I had the amazing opportunity to hang out with Camping World this past week doing some fun cooking. We traveled all over Colorado in an RV making new recipes. These New York Strips with Bourbon Mushrooms were just something fun we put together for the team one evening and they turned out insanely good.

New York Strips for the Team

Now, y’all know that I’m constantly cooking new, exciting recipes. However, sometimes you can’t beat the classics. As I mentioned above, my wife and I spent the last week in Colorado with Camping World. We stayed in an RV and traveled all over Colorado, exploring the state and filming new recipes. Well, on one of our nights off I decided to cook a recipe for the crew. It wasn’t planned, but we were having so much fun with new friends that I wanted to do another, simple cook that we could all enjoy together.

So, that’s where this New York Strips with Bourbon Mushrooms recipe was born. Using what I had access to in Granby, Colorado; we cooked up these steaks and enjoyed them around a fire. It started flurrying about halfway through, which created this awesome moment of being surrounded by mountains, laughing, cooking, huddled around a fire and enjoying bites of steak and sips of bourbon together. THIS is what I love about Over the Fire Cooking. 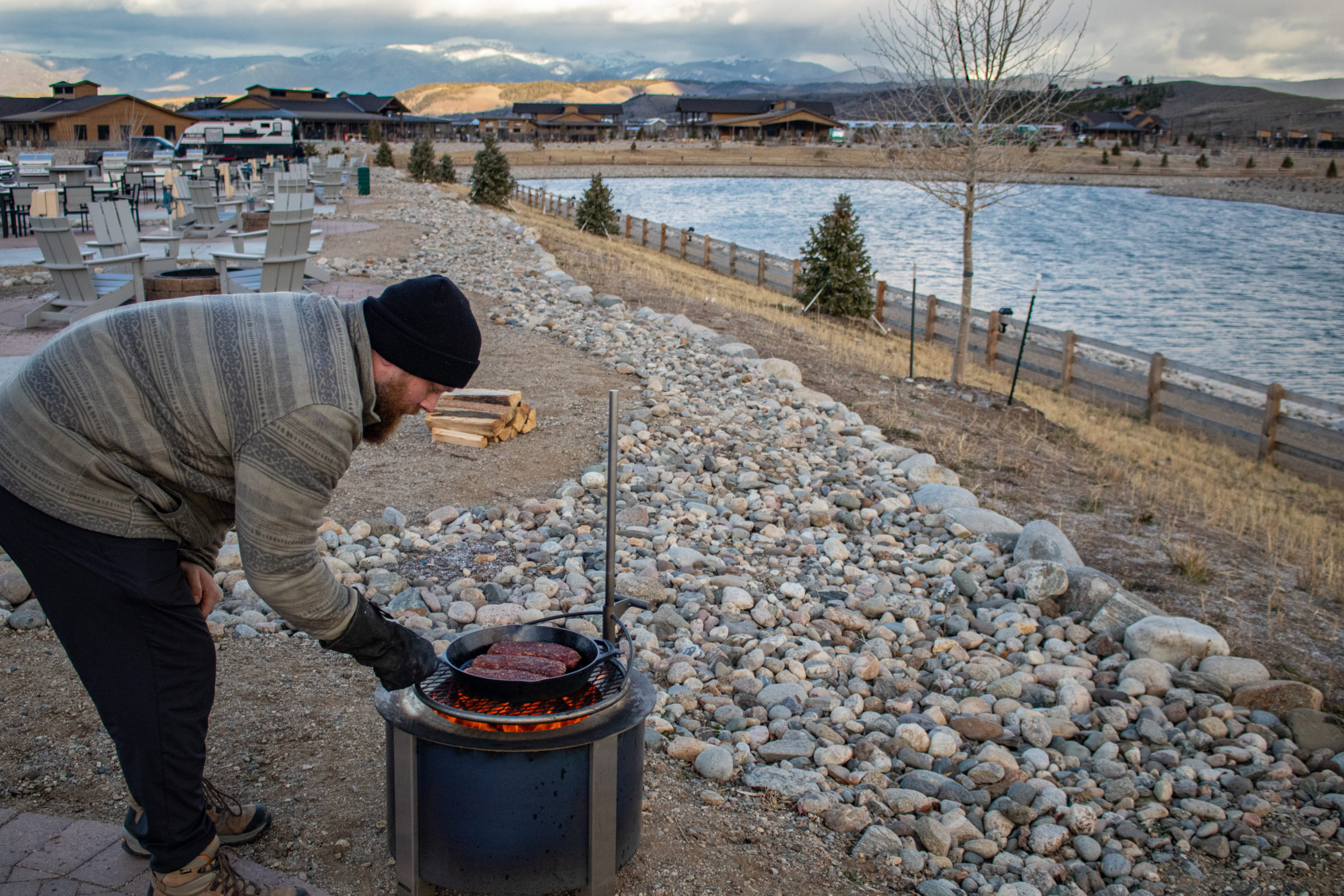 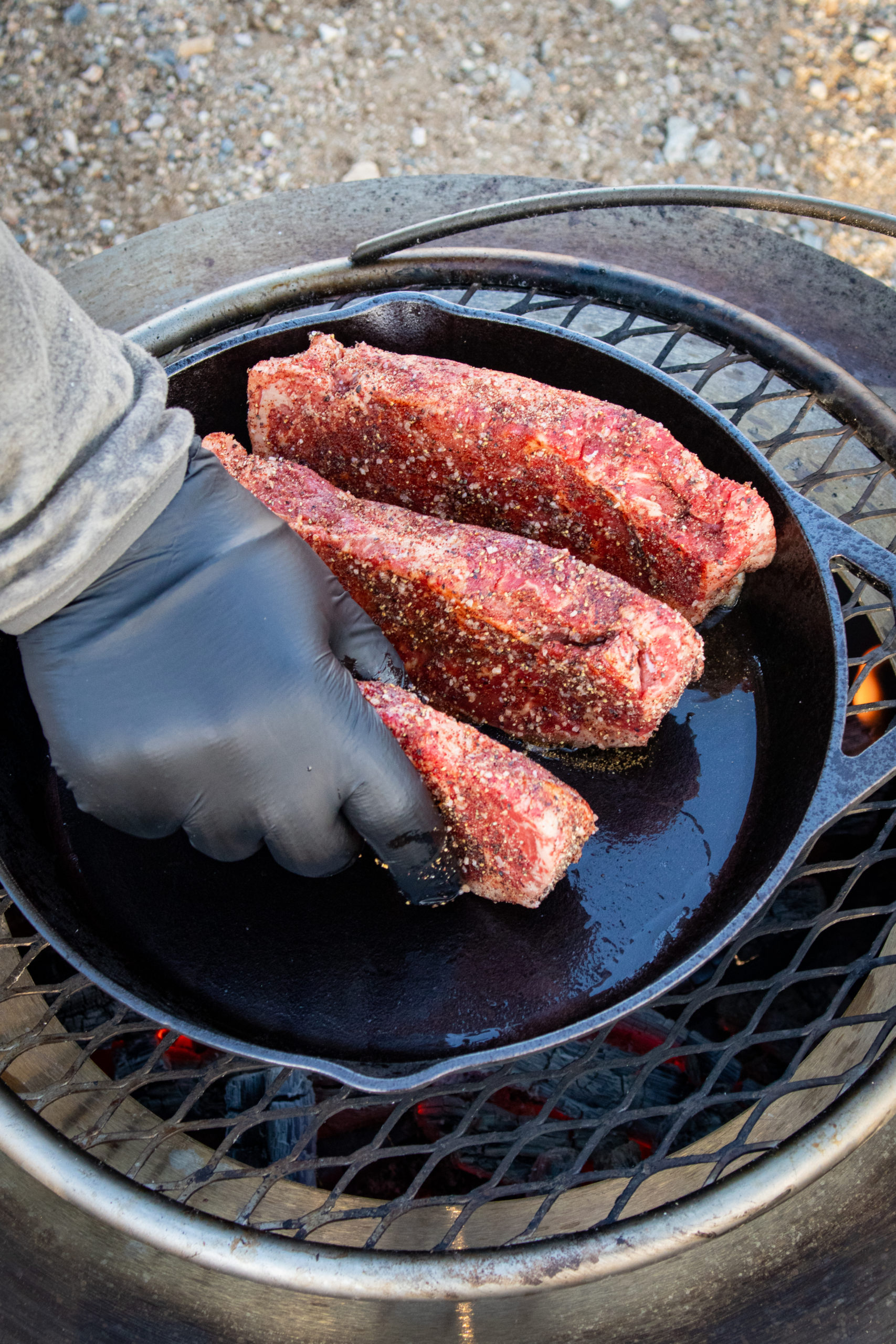 Okay, Okay… On to the New York Strips with Bourbon Mushrooms Recipe

After starting the fire in our traveling Breeo, I seasoned the New York Strips. I used a simple seasoning for this – just salt, pepper, chipotle and garlic powder. I lathered each steak with oil and then covered them with this seasoning.

Then, head back outside with my cast iron skillet. Now, place the skillet on the grill and let it preheat. Once the skillet is hot, give it a drizzle of oil and then place in the steaks. I started by placing the steaks on the side, fat cap down, to render some of that fat before laying them flat in the skillet to cook. I only needed to flip these steaks once per side and cooked them until we reached an internal temp of 120F. 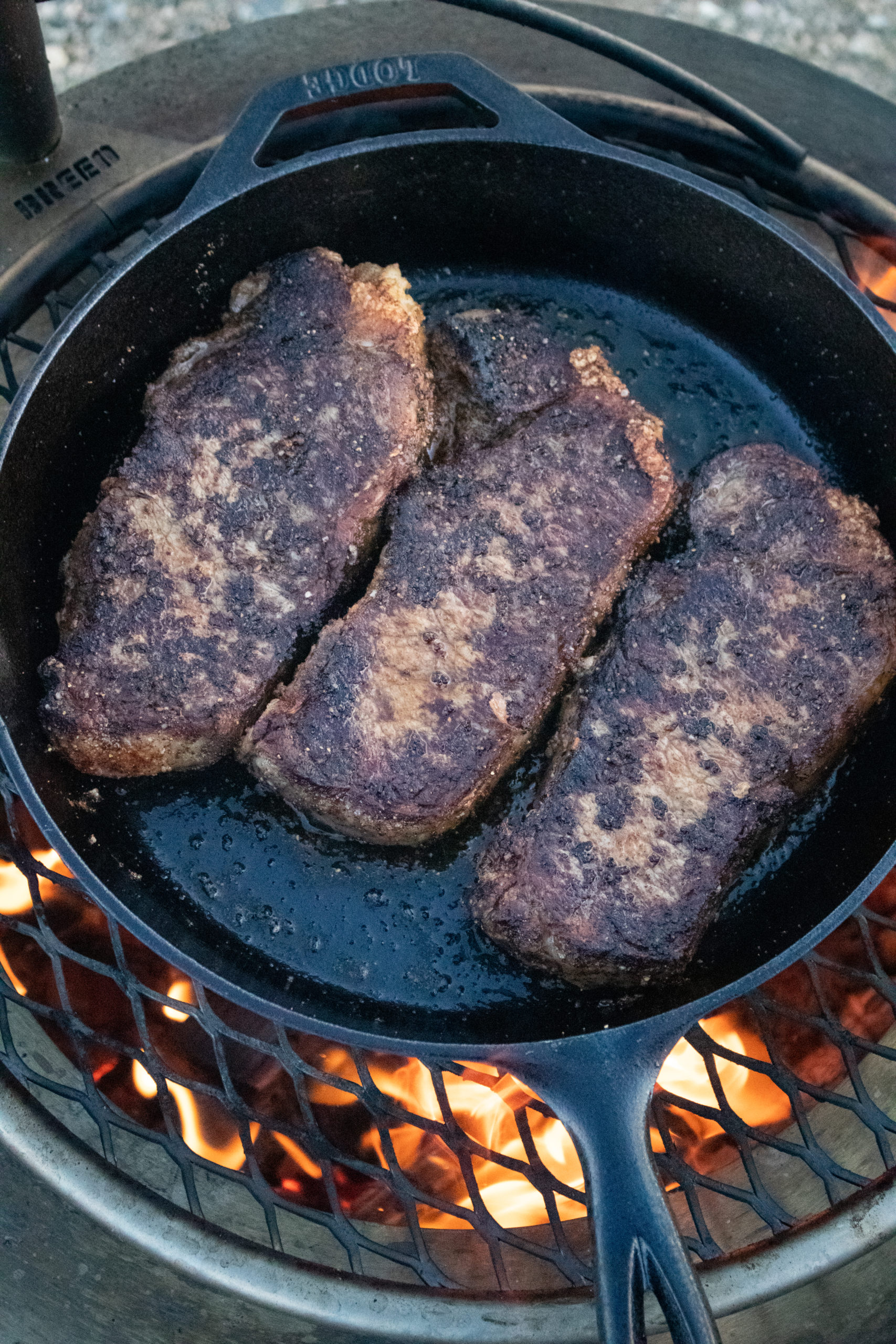 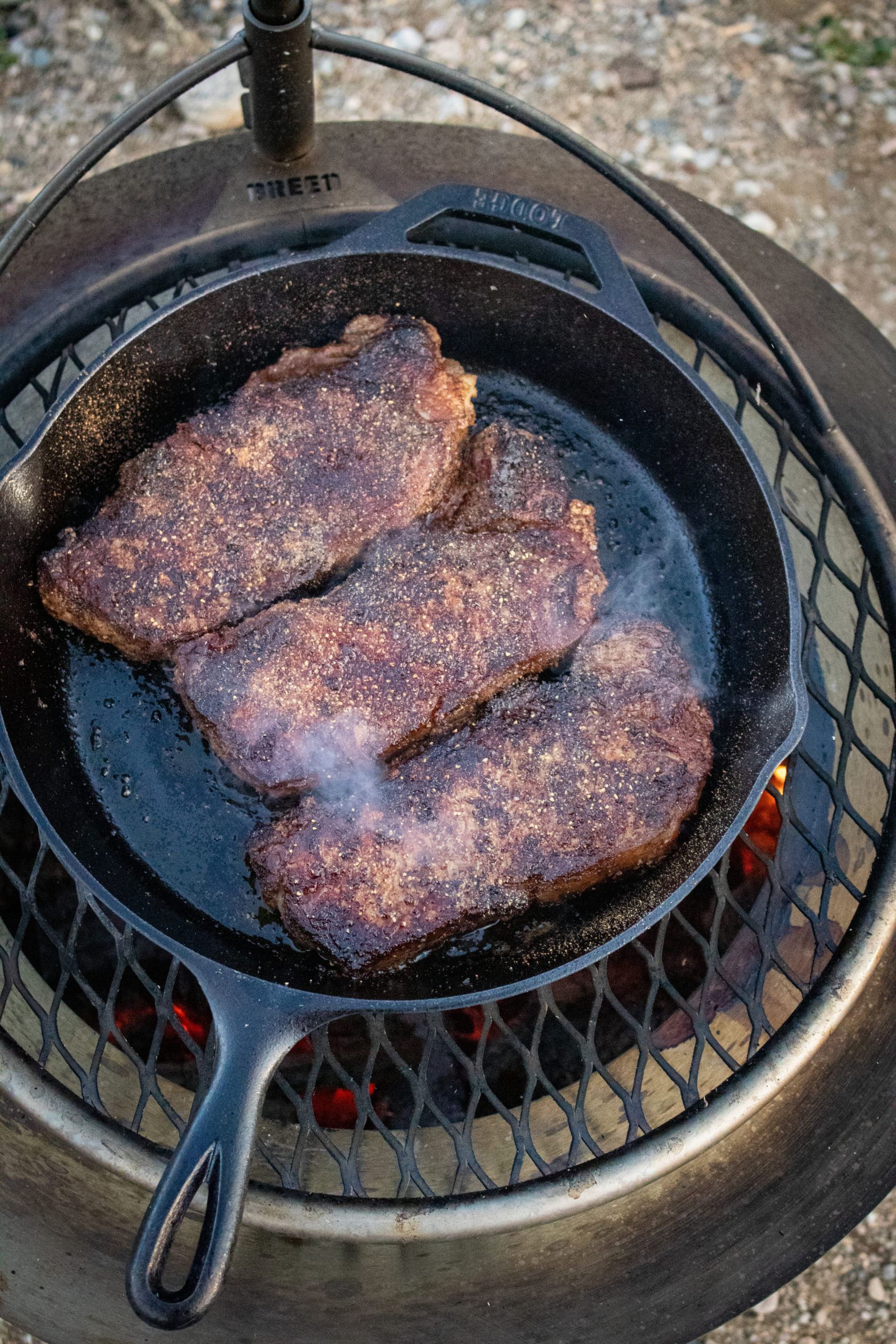 Pro-Tip: After flipping your New York Strips, you can reseason any empty spots on your steaks. Confused? Let me give you more detail… Yes, when I seasoned these steaks initially there were no bare spots. After my first flip, I noticed there were one or two bare spots because the seasoning hadn’t stuck to the New York Strips. If this happens, just grab a bit more seasoning and place it on those spots. This will ensure every slice of steak has some of that delicious seasoning. See photos above for reference.

After the New York Strips have been cooked to your liking, pull them from the skillet and let them rest. Now, we’ll pivot to the bourbon mushrooms. I started by placing the sliced mushrooms in the cast iron skillet. Stir the mushrooms around before adding any of the other ingredients. Mushrooms hold moisture, so doing this will allow them to “sweat” some of this moisture out, concentrating their flavor. 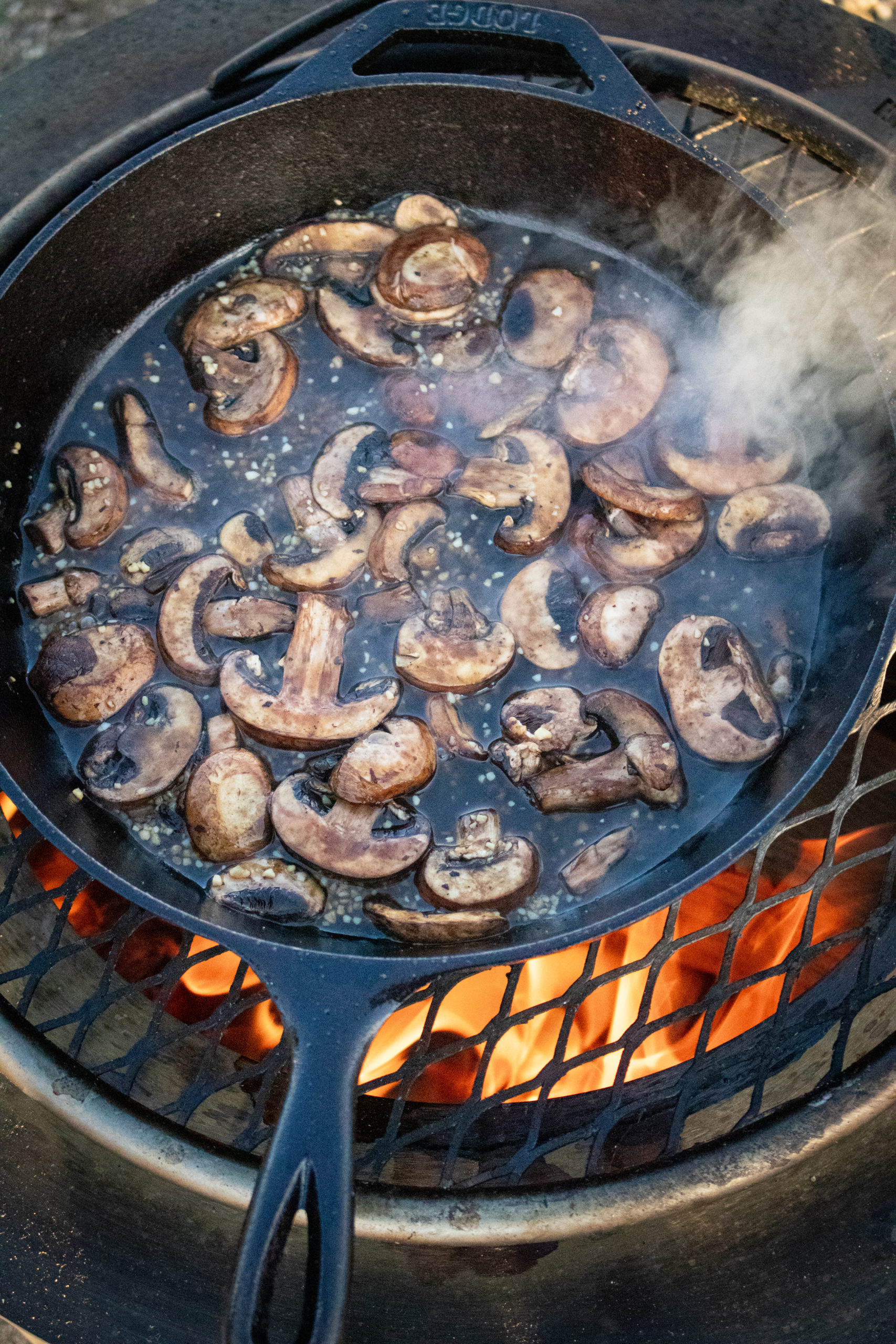 Finally, place your steaks on a cutting board and slice them into bit size slivers. From here, spoon the bourbon mushrooms across the New York Strip steaks. Lastly, I garnished the steaks with some chopped parsley and then it’s time to enjoy. Best enjoyed with the Camping World filming team… Or your closest friends and family. As always, cheers! 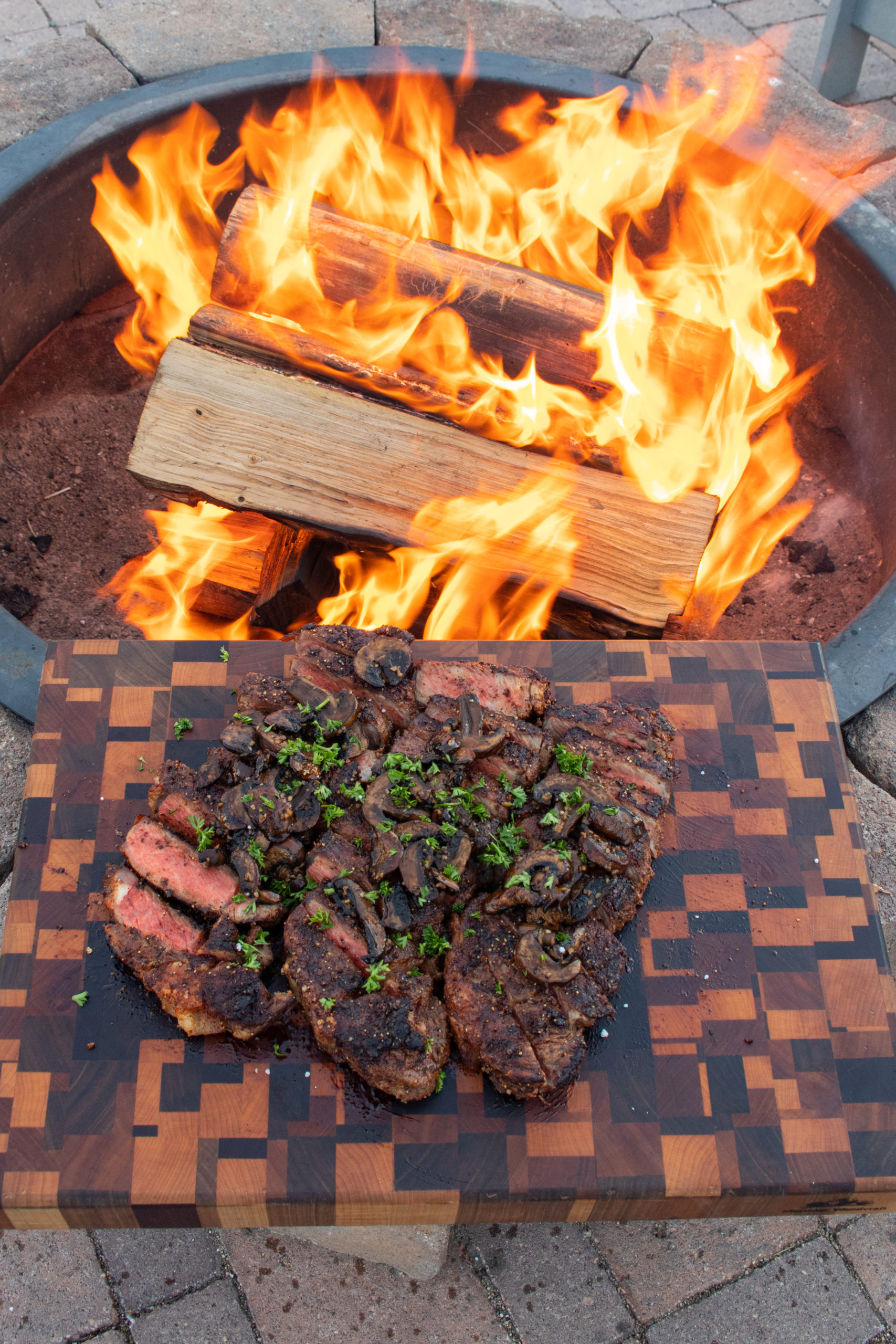 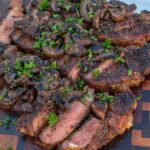