Bourbon Mushroom Steak Tips for bite size pieces of savory deliciousness! These fun sized steaks might be small in size, but they are mighty in flavor. A bourbon and soy sauce marinade sets us up for immediate success. One quick grill and sautée later, and we’ve got steak bites topped with some amazing bourbon mushrooms. Let’s just say, I served this one at a family dinner and the steak was halfway gone before I could bring out the sides. True story. Find out how to make it happen below.

The One Marinade for these Bourbon Mushroom Steak Tips

We kept things simple and easy for this recipe. Start with the marinade. Mix everything together in a large bowl. Then pour that mixture into another large bowl containing the steak tips. Cover this bowl and then place it in the fridge to marinate. The steaks need to marinate for somewhere in between two to four hours.

The reason I called this recipe out for being simple and easy is because the marinade we just used above will also be used to sautée the mushrooms later. Essentially, you’ve already done all the mixing for this recipe! All that’s left to do is let the steaks marinade and slice up the mushrooms. 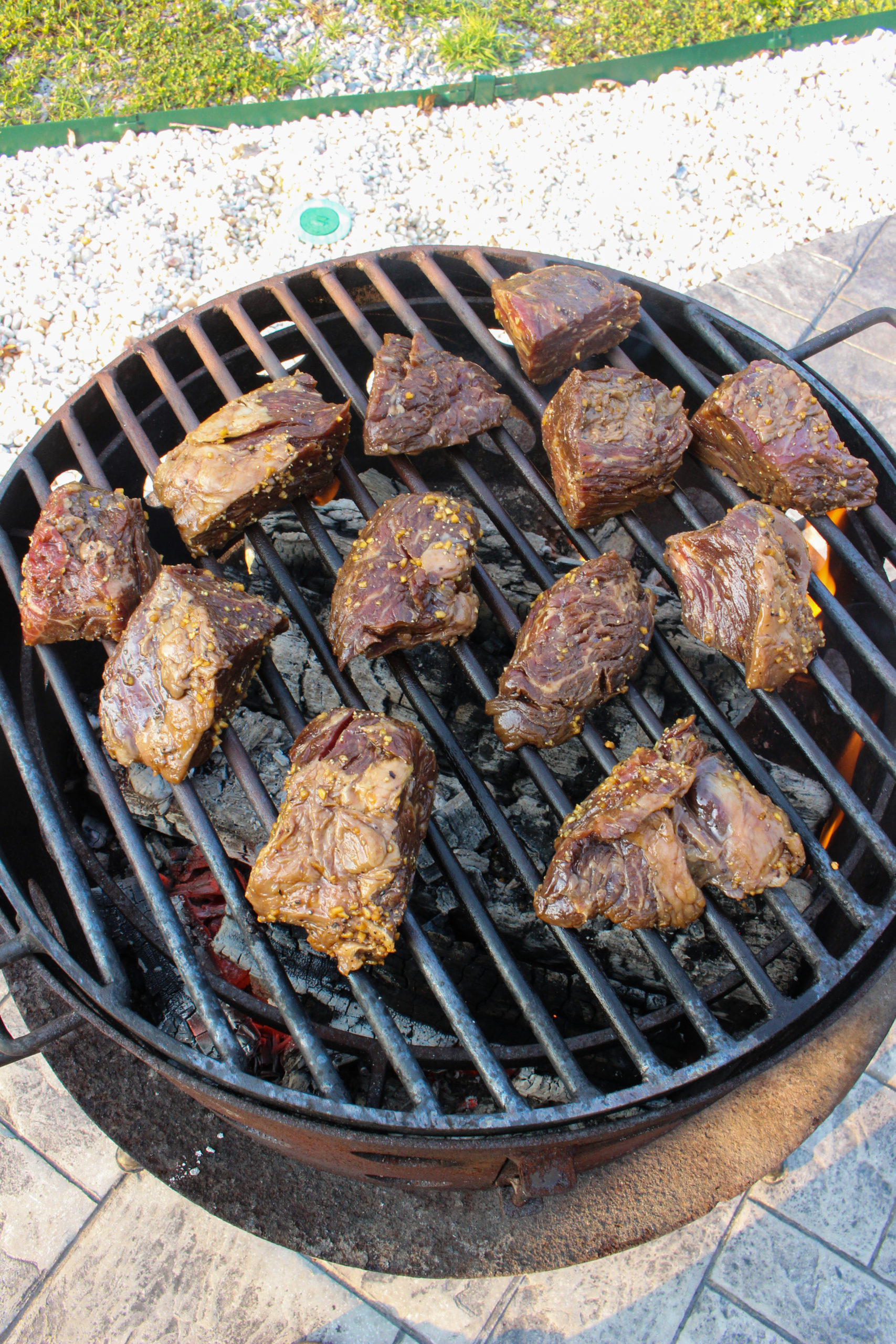 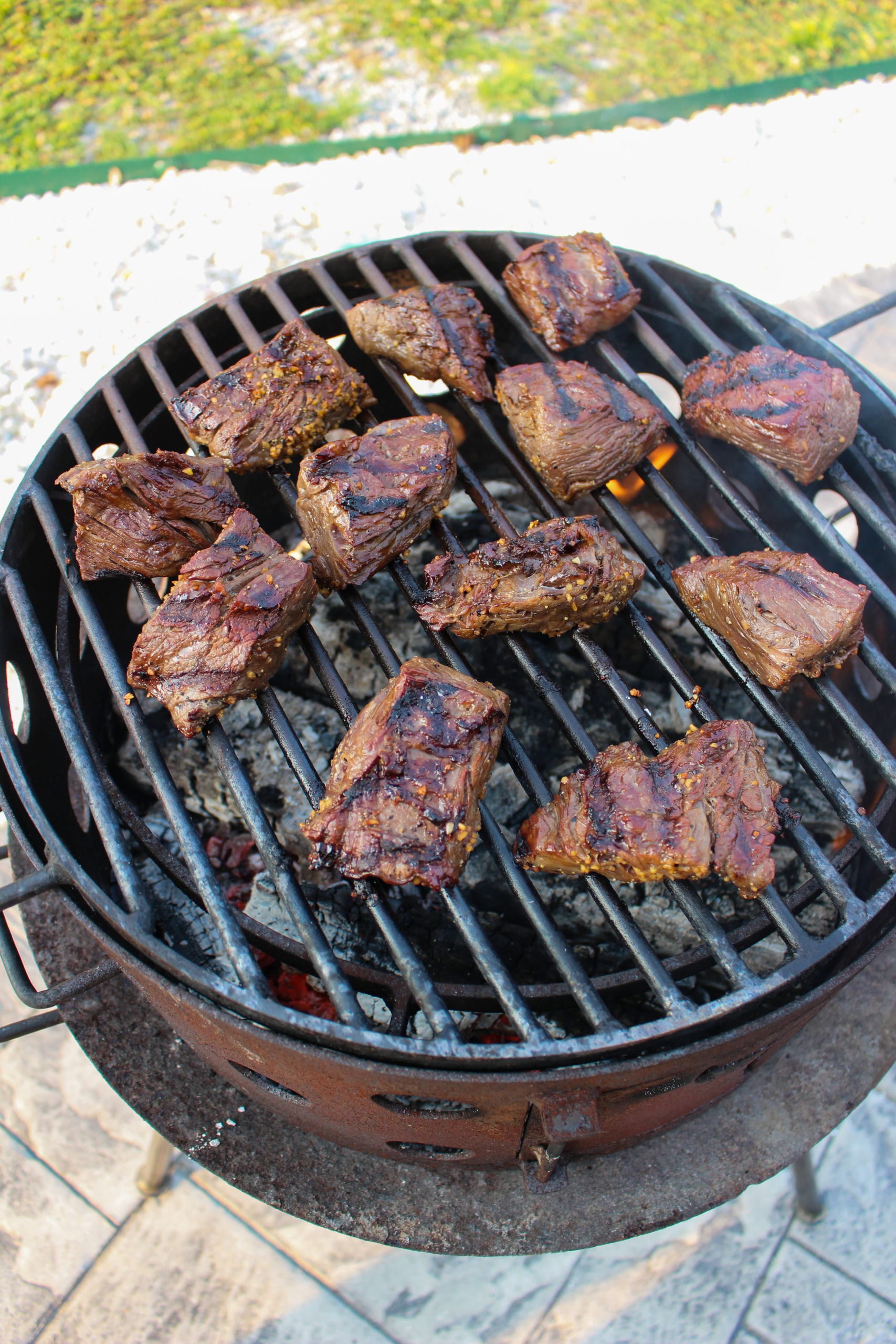 Steak Tips for your Steak Tips

Once grill time comes rolling around, grab the steaks from the refrigerator. Do not dump the marinade out of the bowl! We will want to save about a cup and a half to cook our mushrooms in. With that said, take your steak and remove it from the marinade. I actually strained mine and put a bowl under the strainer to catch the marinade. Alright, grab your tongs and let’s get cooking.

Remove the steak tips from the grill as they finish cooking. Then, add a cast iron skillet to the grill and let it heat up. Once it’s warm, pour the marinade that we saved from earlier into the skillet and bring it to a boil. It’s good to note that the sugar in this marinade will cause it to bubble up pretty quickly, watch out for potential overflows. 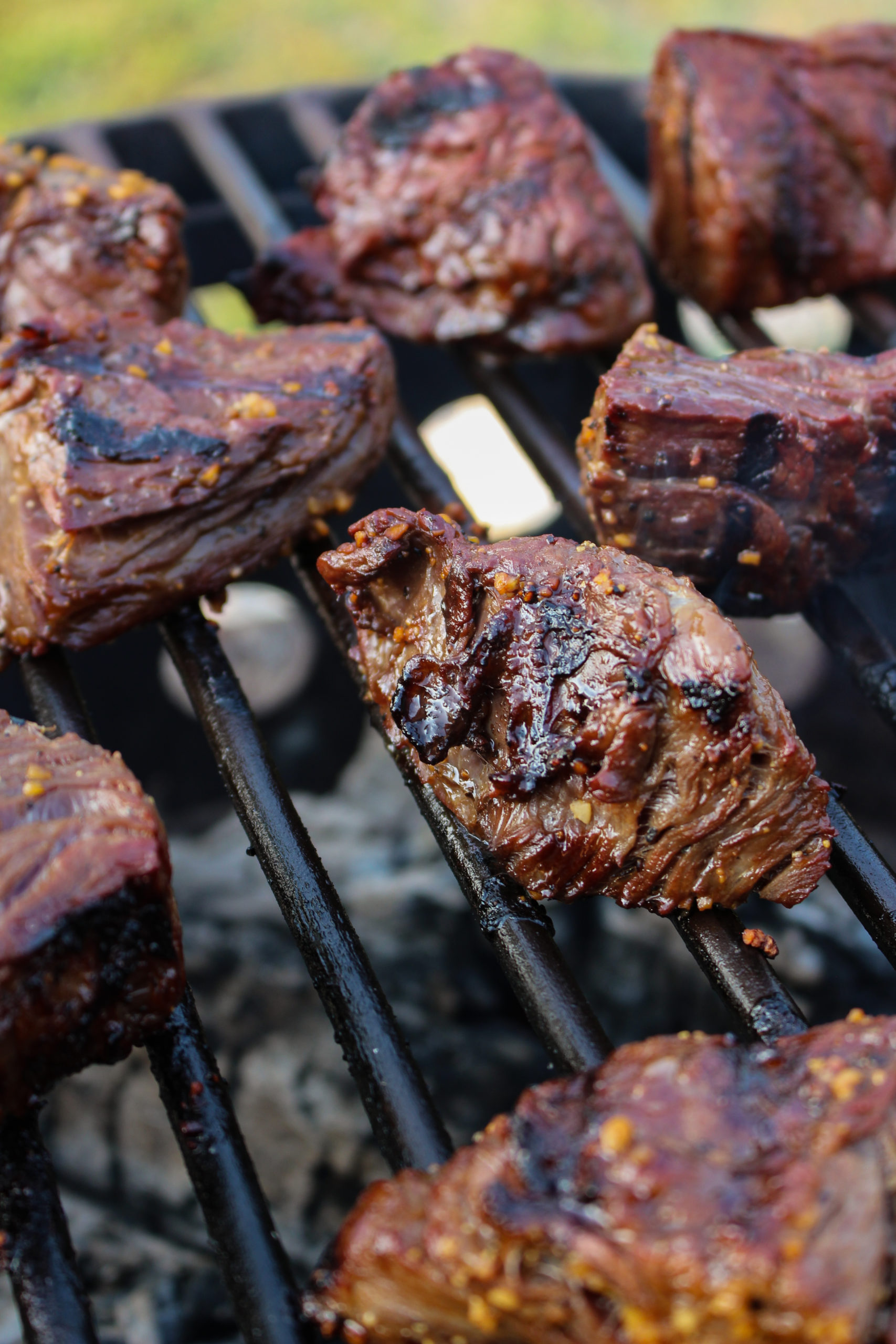 After the marinade has boiled for a minute or two, add in the mushrooms. Stir them while they cook to ensure they don’t burn. Once the mushrooms have cooked to your liking, pull them from the grill as well. Now, time to slice and dice.

Bourbon Mushroom Steak Tips for Everyone

I decided to slice up each of these steak tips for serving. I placed them all across a serving dish and then, using a spoon, dispursted the bourbon mushrooms throughout the dish. Then garnished with some scallions and halved lemons. Like I said above, this dish disappeared quickly, so enjoy it with friends and family… And make sure you get a couple slices before it’s all gone! Cheers. 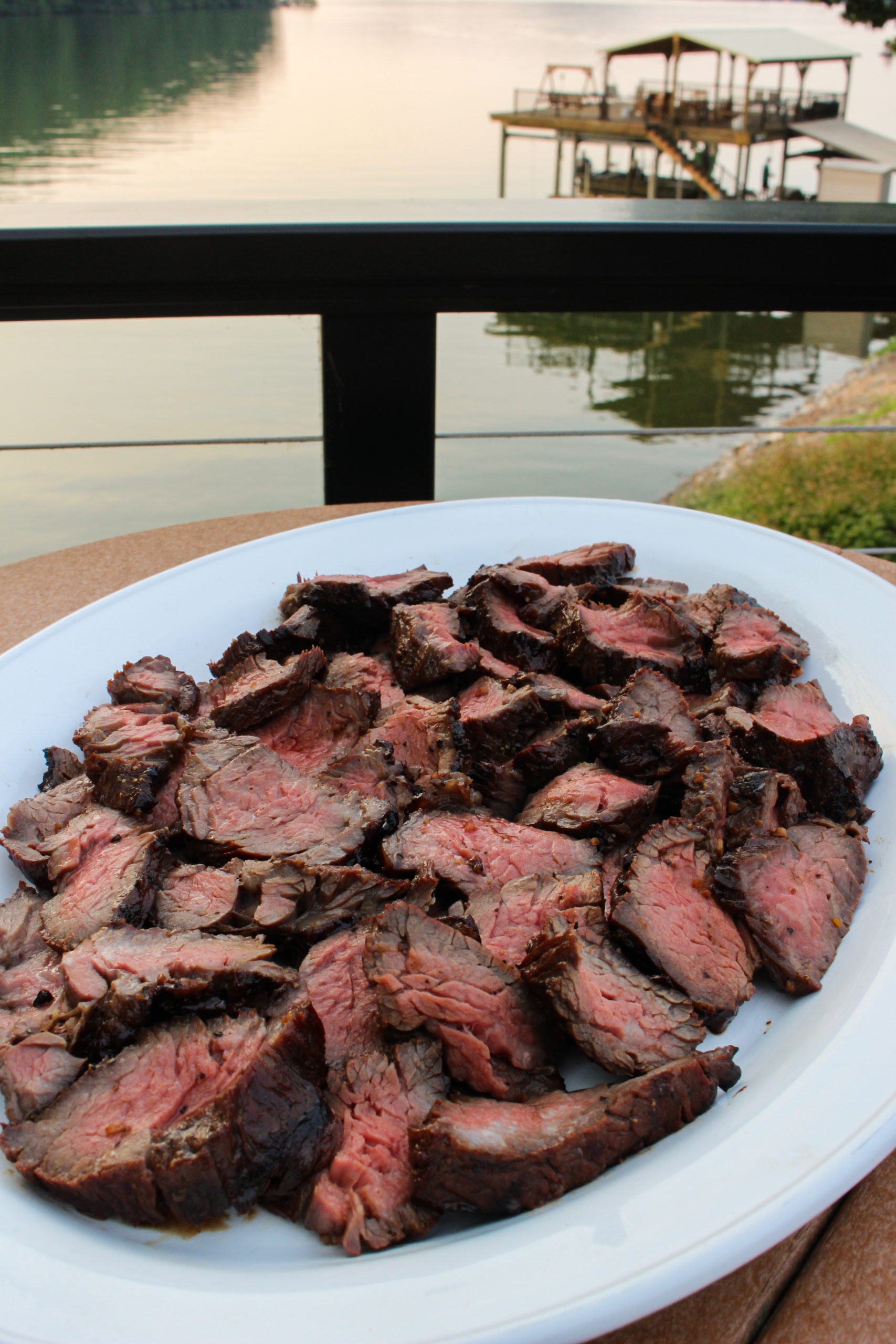 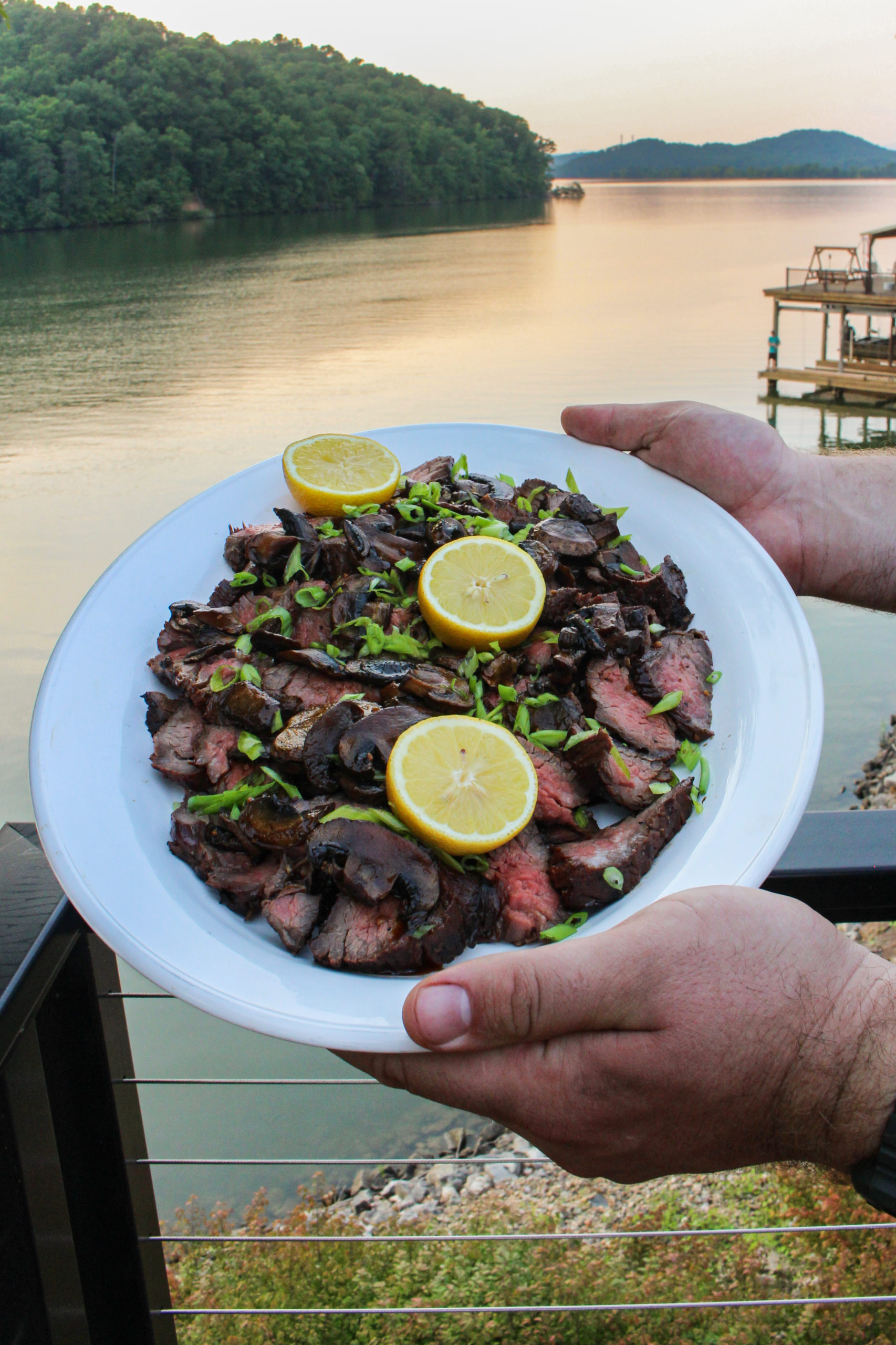 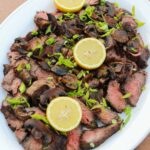 Bourbon Mushroom Steak Tips for bite size pieces of savory deliciousness! These steaks might be small in size, but they are mighty in flavor.