These Surf and Turf Pinwheels are made with juicy steak rolled up with salty prosciutto, parmesan cheese, then served alongside a delicious and flavorful lobster meat skillet.

First, we want to pound the steak out to make it thinner. This helps it cook more quickly and more evenly and at the same rate as the prosciutto in the Surf and Turf Pinwheels.

So, lay the whole flank steak or skirt steak out onto a cutting board. Slice it in half, then cover it with parchment paper or plastic wrap. Next, use a heavy mallet or food mallet to hammer the steak out until it’s less than 1/2″ thick.

Tis the Season for Surf and Turf Pinwheels

Now it’s time to season! In a bowl, mix together the salt, pepper, and garlic powder. Take your prepared steak and lather the outside with canola oil. Make sure you cover it completely. The oil helps the seasonings stick!

Next, grab the bowl with the seasonings and use your hands to rub the spices all over. Again, be thorough!

Next, use two strings of butcher twine to secure the pinwheel roll, then slice between them to make two separate pinwheels. Repeat with the rest of the steak.

Sear the Surf and Turf Pinwheels

Next, let’s cook. To cook the pinwheels, we’re using a Breeo Sear Plate, which is a super easy cooktop attachment for the grill. It’s my go-to for easy cooking!

Add the Surf and Turf Pinwheels onto the sear plate and let them cook for 4-5 minutes on each side. Check that they’re done with a meat thermometer. They should be 130ºF. Be sure to keep an eye on the pinwheels and flip often to keep the cheese from burning.

Cook Your Lobster Meat Skillet for Surf and Turf Pinwheels

While the pinwheels are cooking, you can get started on the Lobster Meat Skillet portion of the meal.

So, add a cast iron skillet or wok to the center of the sear plate. Melt the clarified butter, then add the minced garlic. Let that simmer until it turns a nice golden-brown, then deglaze the skillet with white wine.

Next, add in the lobster meat and let that cook in the butter until warmed through. Finish it off with a sprinkle of chopped parsley, then pull the meat off of the heat and let it rest for 10 minutes.

Serve Your Surf and Turf Pinwheels

And now, we dig in, because it’s too good to wait any longer!

Serve your Surf and Turf Pinwheels up topped off with lobster meat, butter, and chopped parsley. 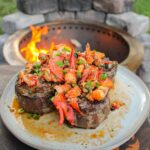 Rolled and stuffed skirt steak cooked all on the Breeo sear plate till perfect. Surf and Turf Pinwheels is the best of both worlds.