Tomahawk Steaks with French Onion Crust takes everything you love about french onion soup and pairs it with steak. I teamed up with my good friends at Buffalo Trace to create this recipe and it turned out even better than I expected! The secret was all in the carmelized onions. The crisp and slight sweetness it brought to these steaks was unreal and mega delicious. Not to mention the melted cheese on top. Out. Of. This. World! Let me tell you how to make it yours.

We’ll get to the tomahawks soon enough, but first we need to talk about these caramelized onions. In my opinion, these onions are what made this recipe. It all started with… Butter. As most good dishes do. I tossed the butter into a cast iron skillet that was already preheated on the grill.

Move the butter around with a spoon, tongs, or a spatula to coat the bottom of your skillet with it. Now, we’ll add the onions. I used sweet yellow onions for this Tomahawk Steaks with French Onion Crust recipe because they pair best with the sweetness of the bourbon. More to come on that soon. The onions are best if they are sliced slightly thinner than pencil thickness. Toss them all into the skillet and mix around. 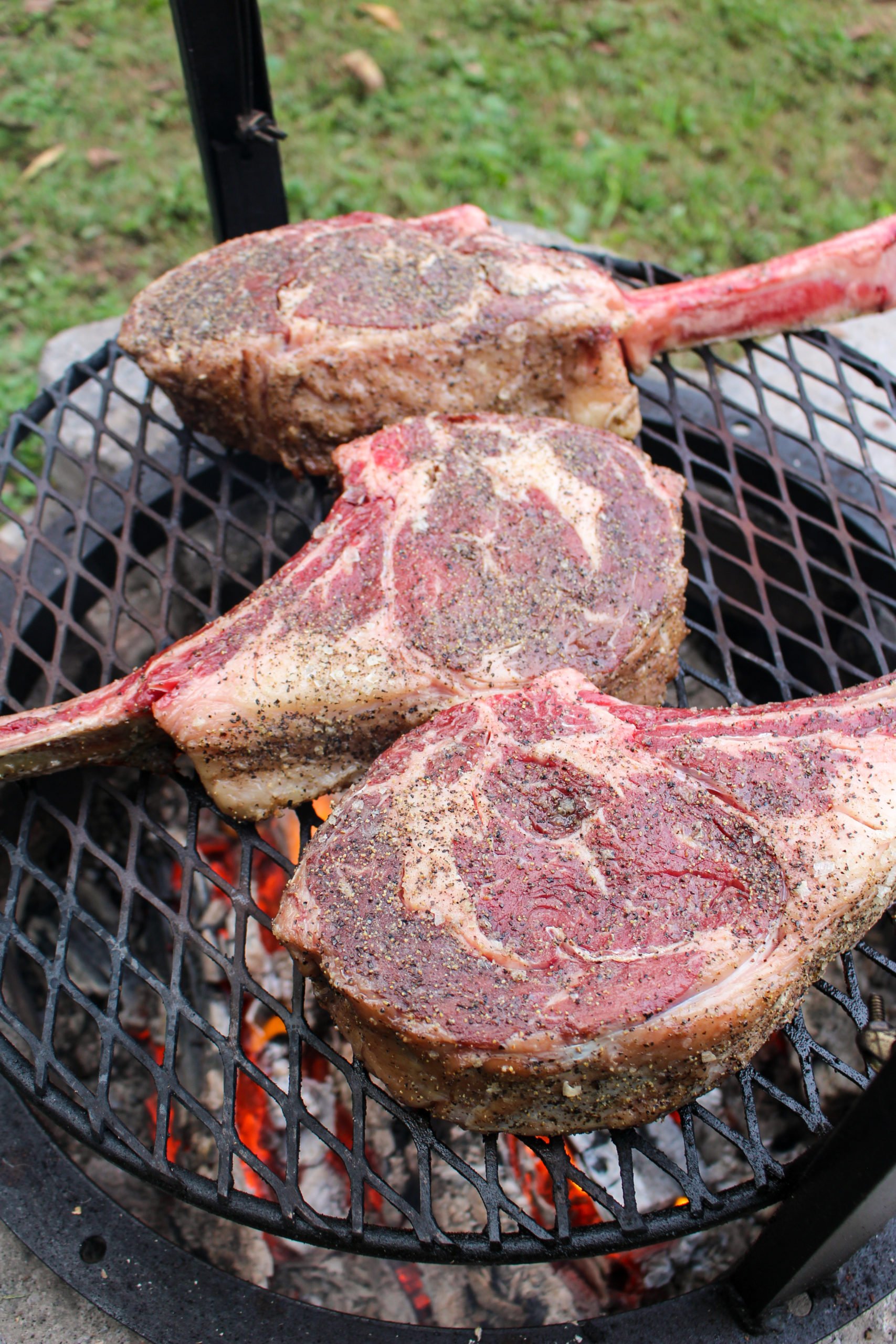 From here, we’ll toss the remaining ingredients into the skillet. My favorite of said ingredients is, of course, the Buffalo Trace. It’s the secret ingredient that gives these caramelized onions a distinctive sweetness, making it almost nutty in flavor. It’s that sweetness that pairs so well with the fatty and savoriness of the tomahawk steaks.

Alright, now the moment we’ve all been waiting for. Time to grill the tomahawk steaks.

Before these steaks hit the grill, I seasoned them with some salt and pepper. Then, take them over to the fire and set them on the grill grate. I let my tomahawk steaks cook 12-15 minutes per side, waiting for them to reach an internal temperature of 120F. Pull them from the grill to rest once they hit that internal temperature.

While the tomahawks are resting, let’s make the cheese crust portion of the French Onion Crust. To make this, simply mix all your cheese crust ingredients together, making sure to use melted butter. The melted butter is important because the panko crumbs will absorb that butter and help hold all the ingredients together. It should be at a paste-like consistency and easy to spread across the tomahawk steaks. 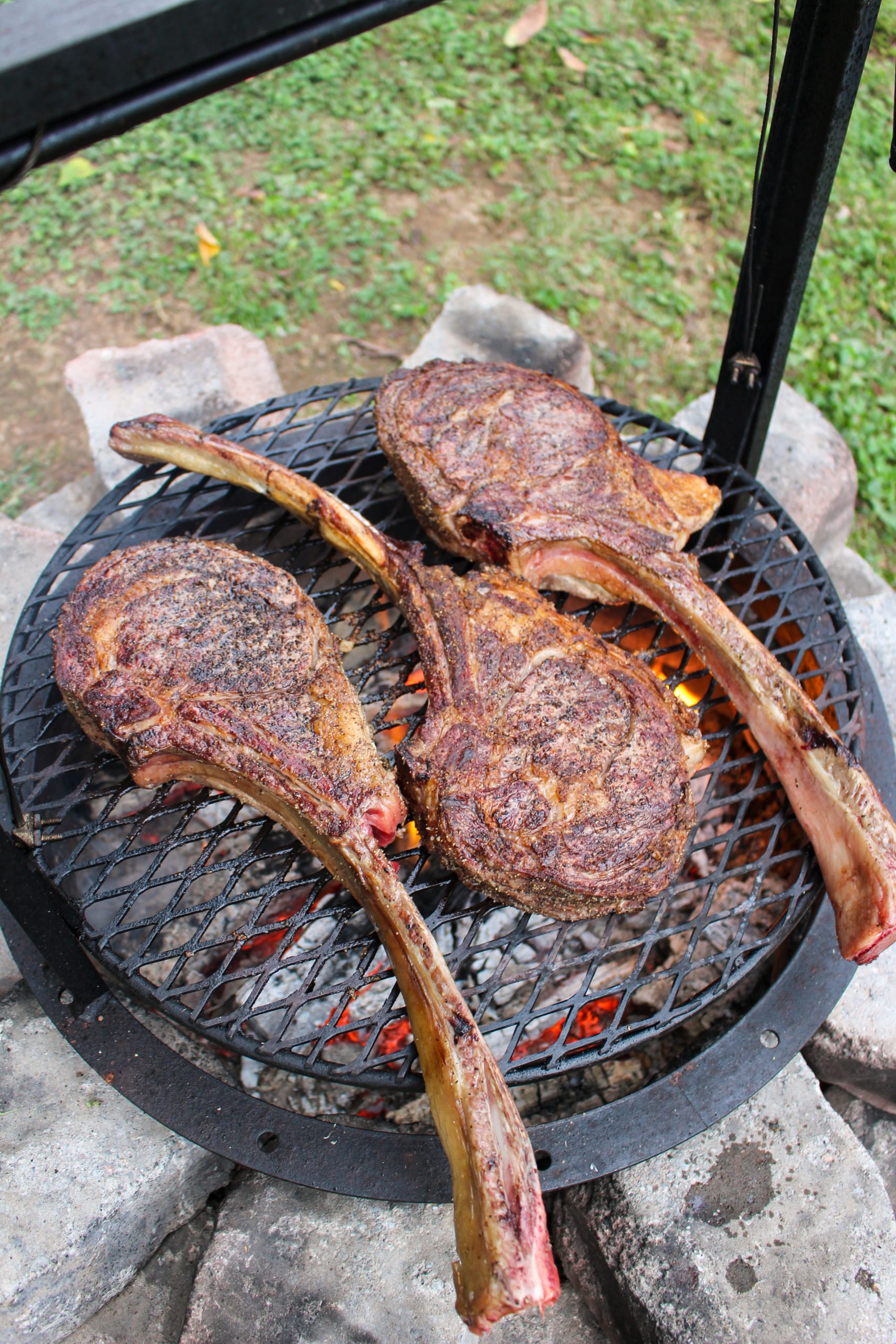 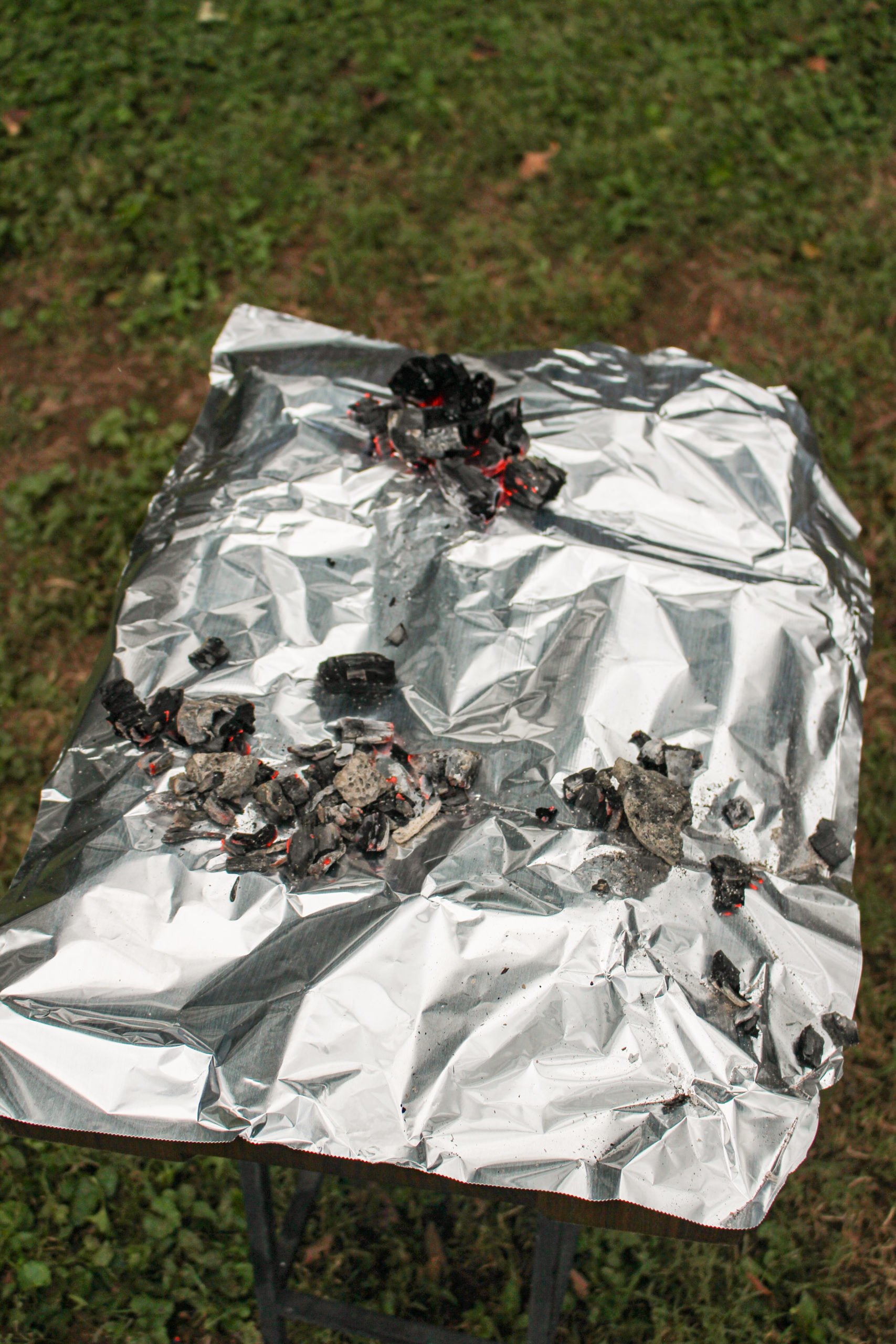 Under the Fire Cooking

Yes, you read that correctly. We’re going to be cooking the last portion of this Tomahawk Steaks with French Onion Crust recipe under the fire. Here’s how:

Grab your rested tomahawk steaks and then place them on a cooking sheet (we don’t want to burn or melt a cutting board). Next, pile up those caramelized onions across the entire surface of those steaks. We’ll then cover each steak with the cheese crust. I spread it all across the top of the onions that were on top of the steaks.

Now, take a large sheet of aluminum foil and lightly lay it over the steaks. Next, I put my welding gloves on so that I could grab some hot, fiery coals from the fire. Carry them over to the tomahawks and then place them on top of foil that was directly over the steaks. This, my friends, is how we turn our cheese paste into a French Onion Crust.

You can carefully peek under the foil to check on cheese, making sure it gets a slight char but isn’t burning. After you’ve achieved your desired charred-ness for the cheese crust, remove the foil. Lastly, transfer your steaks over to a cutting board, slice and serve. Best enjoyed with friends and family. Cheers!

If you’re a bourbon drinker like myself, give this Bourbon Mushroom Steak Tips Recipe a try! 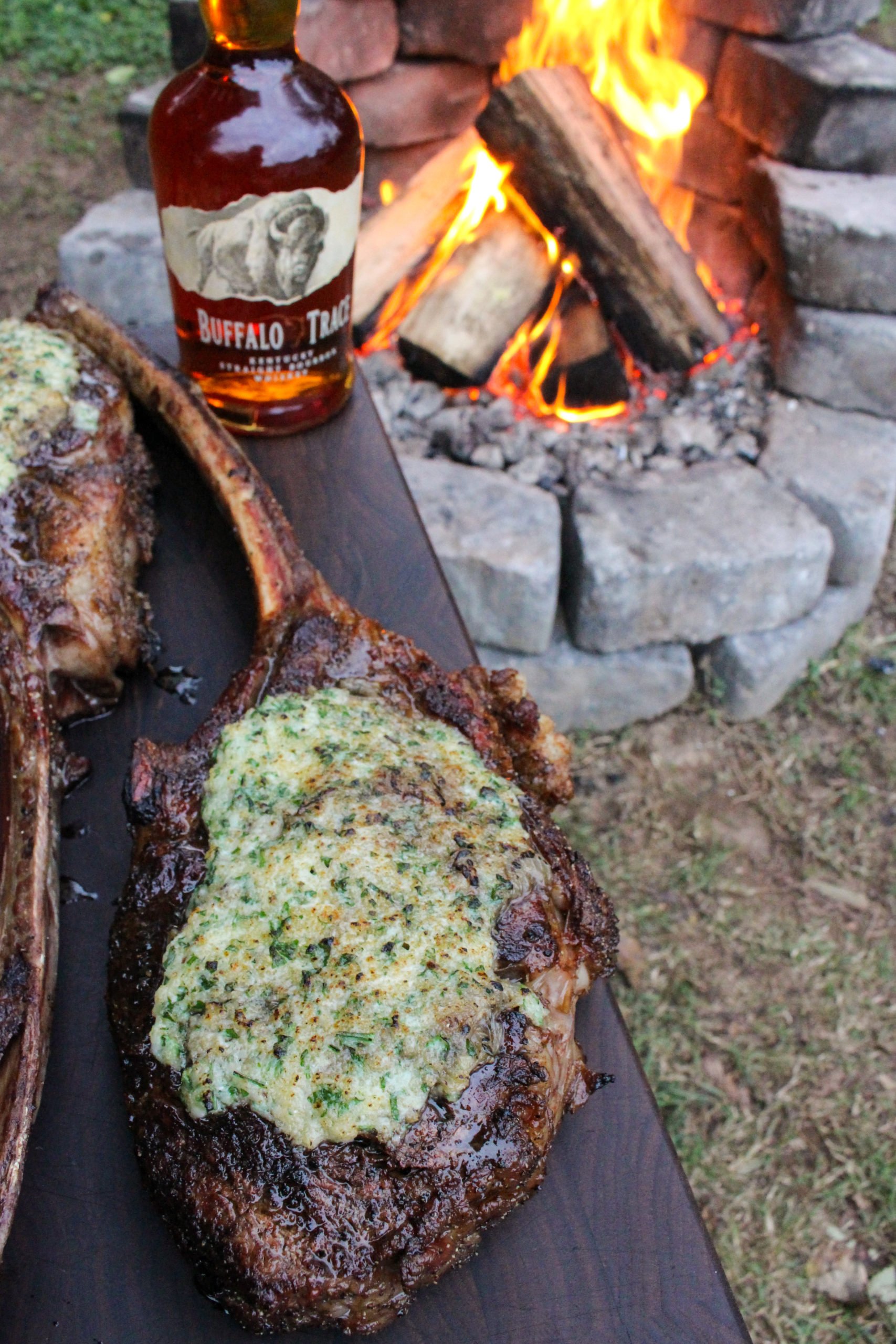 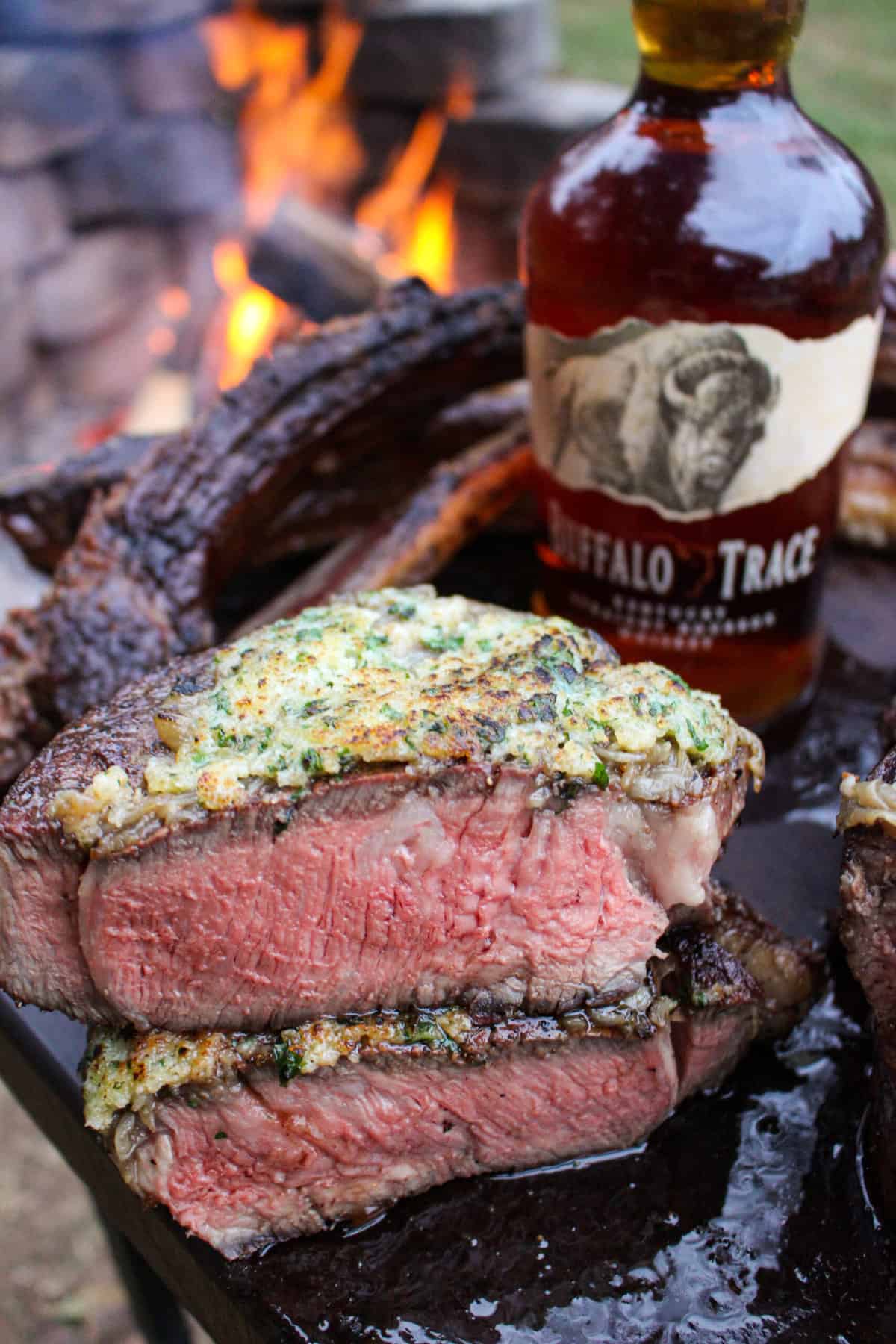 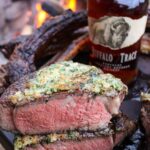