These BBQ Volcano Potatoes are a simple yet impressive dinner or tailgating recipe! Crispy potato peels are stuffed with a cheesy pulled pork stuffing, wrapped in crispy bacon, then smoked until hot and melty.

Before you start your potatoes, preheat your smoker to 275ºF for indirect cooking so it’s nice and hot when you’re ready to cook. Now, as usual, I use my Oklahoma Joe’s Bronco Drum Smoker, because it really is the superior way to smoke anything. Trust me on this one, folks.

Okay, now we can move onto the BBQ Volcano Potatoes. Start with 4-5 Russet potatoes. I recommend running them under the faucet and giving them a good scrub to remove any dirt and grime.

Next, poke holes all over the outside of each potato, then place them onto the smoker. Let the potatoes cook for 1.5-2 hours.

Once they’re nice and soft, pull them off and let them cool for a few minutes.

Next up, the stuffing for your BBQ Volcano Potatoes. I like to assemble the stuffing while the potatoes are smoking to save time, because the sooner I get to eat the better.

Grab a Potato and Stuff It

Next, grab the cooked potatoes and slice the top and bottom off of each one so that they’re flat on each end. Grab a spoon and use that to very carefully hollow the potato out so that most of the “meat” is gone. Don’t discard the “meat”, though. You can make it into mashed potatoes OR mix it into the prepared stuffing to make it even more hearty!

Grab your bowl of stuffing and carefully stuff each hollowed out potato. Wrap each one with 1-2 slices of bacon, then secure the BBQ Volcano Potatoes with toothpicks. We don’t want the bacon unwrapping while the potatoes are cooking. Lastly, season the bacon generously with the BBQ seasoning of your choice.

We’re almost done! Just a little more cooking and you can dig in. I know I’m excited!

So, kick the heat on your smoker up to 350ºF. We want it to be nice and hot so the bacon crisps up!

Place the potatoes in a skillet or directly on the grill grate, then let them cook until the bacon is crispy. This usually takes me anywhere from 30-40 minutes. I recommend checking at 30, then adding time as needed.

Finally, pull the potatoes off the smoker and let them cool for a few minutes.

It’s time to eat! Serve these delicious and hearty bites of goodness with a drizzle of BBQ sauce, sour cream, and chopped scallions.

Oh, and a side of mashed potatoes thanks to the leftover potato from earlier! 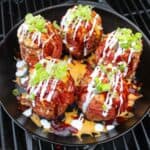 These BBQ Volcano Potatoes are stuffed with a cheesy pulled pork stuffing, wrapped in crispy bacon, then smoked until hot and melty.