These Bourbon Marinated Ribeyes are sweet and savory with a spicy kick. Tender ribeyes smothered in a rich, creamy, and cheesy mushroom sauce!

First, we marinate our ribeyes, because a marinade is the key to a great steak! So, in a food safe bag or bowl, mix together the minced garlic, Cajun blackening seasoning, low sodium soy sauce, honey, and bourbon.

Next, lightly score the outside of your ribeyes. The goal here is to increase the surface area of the meat to allow the marinade to penetrate deeper. It is Bourbon Marinated Ribeyes after all!

So, place the steaks into the prepared marinade, seal the container, and place in the fridge to marinate for four hours!

Next, let’s get cooking! Preheat your grill to a medium-high heat temperature of around 375ºF for direct cooking. Pull the ribeyes out of the marinade, then add them onto the grill directly over the heat source. Cook them for roughly three minutes on each side, then check that they are an internal temperature of 120ºF. Medium-rare Bourbon Marinated Ribeyes is where it’s at!

Now, while the steaks are cooking, be sure to move them around on the grill or pull them off of the heat if they start to burn. We want them cooked, not charred.

Next, pull the steaks off of the grill and keep them warm until you’re ready to serve.

Next up, our rich, creamy, insanely flavorful Cheese and Mushroom Cream Sauce, because it’s just what Bourbon Marinated Ribeyes need. Trust me.

To make your sauce, kick the heat on the grill up to a temperature of around 400ºF. Add a cast-iron skillet to the grill, then drizzle in a little bit of oil.

Next, add in your sliced mushrooms and allow them to cook for 7-8 minutes or until they start to sweat out the water. Be sure to stir pretty frequently so they don’t burn! No one likes burnt mushrooms on their Bourbon Marinated Ribeyes.

Add in minced garlic and allow that to caramelize for a few minutes, then deglaze the skillet with bourbon. Lastly, pour in the heavy cream and let the mixture slowly simmer until the sauce is thickened. I usually achieve this in anywhere from 5-8 minutes. Again, keep an eye on it and stir frequently to make sure it doesn’t burn.

To serve it all up, slice the steaks and add them onto a serving plate topped with a generous ladleful of your Cheese and Mushroom Cream Sauce. Garnished with chopped parsley, then dig in!

If you love a cream sauce as much as I do, you’ll also love my Steaks with Gorgonzola Mushroom Cream Sauce, Bison Tenderloin with Cognac Cream Sauce, or Ribeye w/Bourbon Cream Sauce or try my grilled cap of ribeye recipe with horseradish sauce! 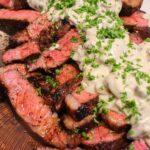 These Bourbon Marinated Ribeyes are sweet and savory with a spicy kick. Tender ribeyes smothered in a rich, creamy, and cheesy sauce!