This Carne Asada Crunch Wrap is a Taco Bell classic made right at home! We’re whipping up a batch of grilled carne asada, then loading it up in a toasty tortilla with tostada shells, nacho cheese, lettuce, tomato, cheese, and sour cream.

This homemade crunch wrap is fire cooking and fast food all in one. And it’s so good!

Our Carne Asada Crunch Wrap starts with the perfect steak marinade…because the steak is the star of the show after all. So it better be flavorful!

To make your marinade, mix together lime juice, orange juice, scallions, chopped cilantro, jalapeño lime pilsner, hot sauce, and light beer. Add the 1-2 skirt steaks into the bowl with the marinade, mix thoroughly to coat the meat, then cover and place in the fridge.

Now, as always, the longer the meat sits in the marinade, the better the flavor will be. So, I like to marinate the meat for the Carne Asada Crunch Wrap overnight, but if you’re shorter on time, a minimum of 4 hours will result in perfectly good meat too.

With the steak for the Carne Asada Crunch Wrap nice and marinated, it’s time to cook.

First, preheat your fire to a high heat of around 400ºF for direct grilling. Pull the steaks out of the bowl and get rid of the excess marinade.

Next, add the skirt steaks for the onto the hot grill. Allow them to cook for 2-2.5 minutes on each side. To check that they’re done, use a meat thermometer. The internal temperature should be 125ºF!

To finish the steak for the Carne Asada Crunch Wrap, pull the steaks off the grill. Let the meat rest for 10 minutes, then slice the steaks up into bite sized cubes.

Let’s get our crunch wrap ready to go, because I know your mouth is watering!

Lay a large, warm tortilla out onto a clean work surface. Place a handful of the grilled carne asada onto the tortilla, then drizzle on a generous amount of warm nacho cheese.

Next, add the tostada over the top followed by a layer of sour cream, shredded lettuce, diced tomatoes, and shredded cheese.

To finish the Carne Asada Crunch Wrap, fold the large tortilla over the food to form that classic Crunch Wrap shape. You can add another smaller tortilla if it’s not quite big enough. But, if you use large tortillas, you shouldn’t have any problems.

Let’s Have a Toast for our Carne Asada Crunch Wrap

Okay, now that the Carne Asada Crunch Wrap is assembled, we have one more quick step: toast it!

Add a cast-iron skillet onto the hot grill, then add in the crunch wraps with the folded side down. Toast them for a couple of minutes on each side until they turn a nice golden-brown. The more “crunch”, the better!

Pull the wraps off of the grill, let them cool for a couple minutes, then dig in!

Check out this full length recipe video on Facebook. 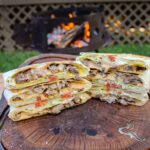