This Cheesesteak Quesadilla is made up of all of the best flavors of the classic Philly cheesesteak sandwich but layered in a cheesy, gooey, melty quesadilla.

I don’t think so.

Prep and Cook Your Steak for the Philly Cheesesteak Quesadilla

Next, preheat a medium-high heat fire to around 375ºF, then set a large plancha or skillet over the heat. 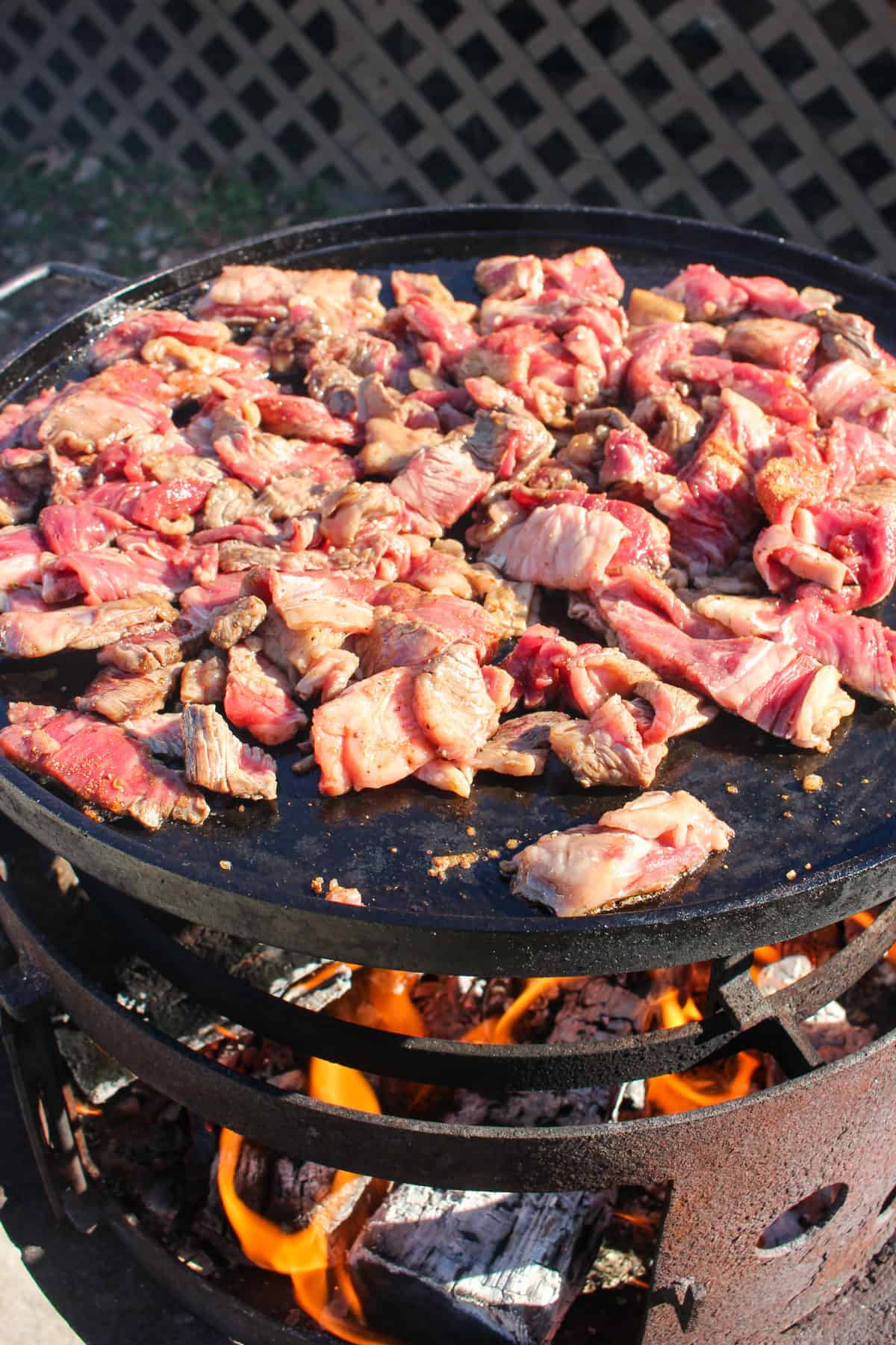 Drizzle canola oil into the skillet or plancha, then add in the sliced steak and a sprinkle of the steak seasoning of your choice. I like Bourbon Prime Seasoning, which is a delicious blend of sweet, spicy, savory, and smoky seasonings that take the steak to a whole new level of flavor.

Cook the steak for about 10 minutes until it is browned, slightly crispy, juicy, and tender. Next, pull the steak out of the skillet and allow it to cool slightly while you cook up your veggies. 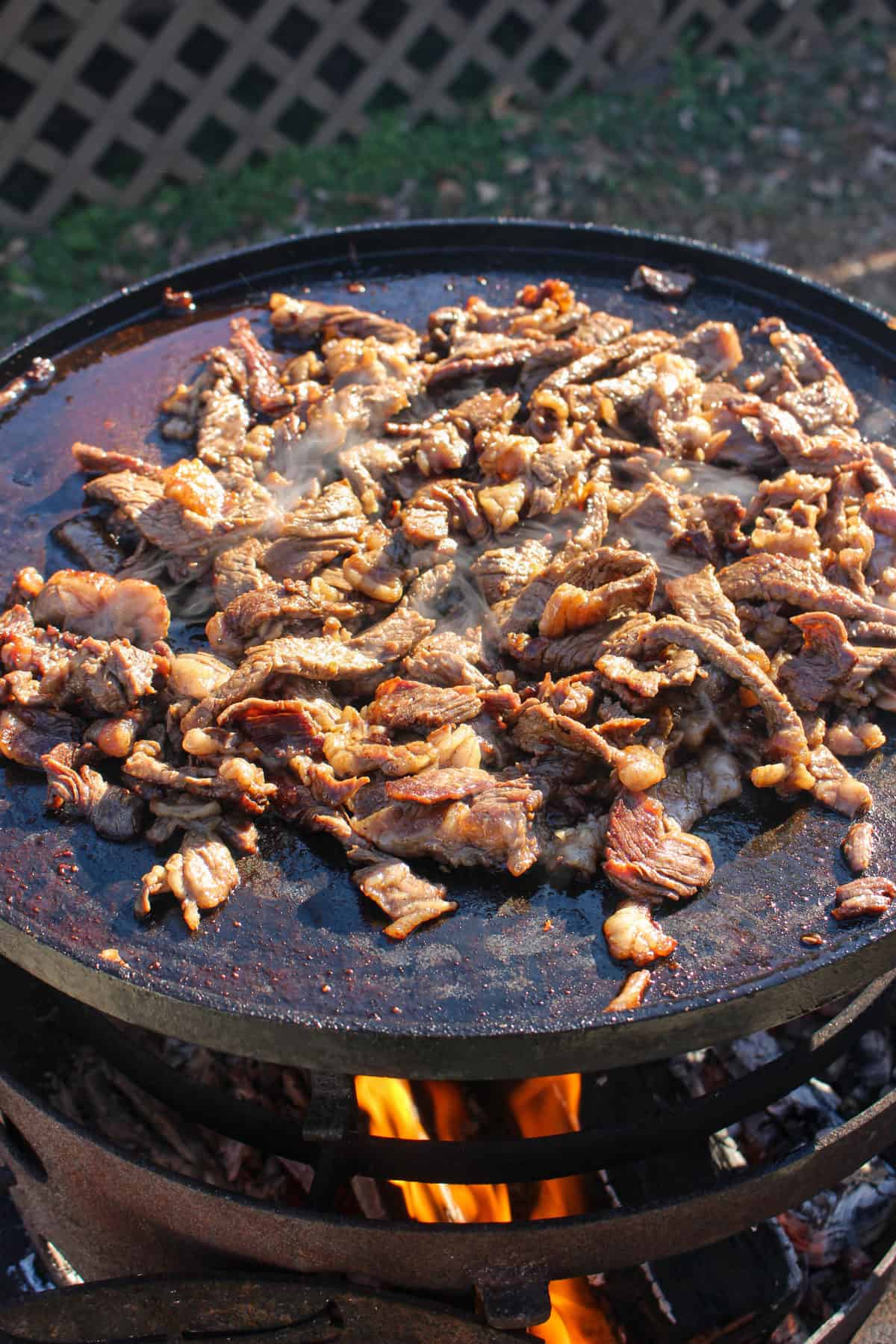 Be cautious. It is remarkably difficult to not munch on the steak while you prep the rest of your cheesesteak quesadilla recipe. But although the steak is delicious on its own, it’s extra delicious in a quesadilla.

To the now empty skillet, add the sliced bell peppers, sliced onions, and minced garlic. Feel free to use whatever veggies you like. Mushrooms would also be delicious! 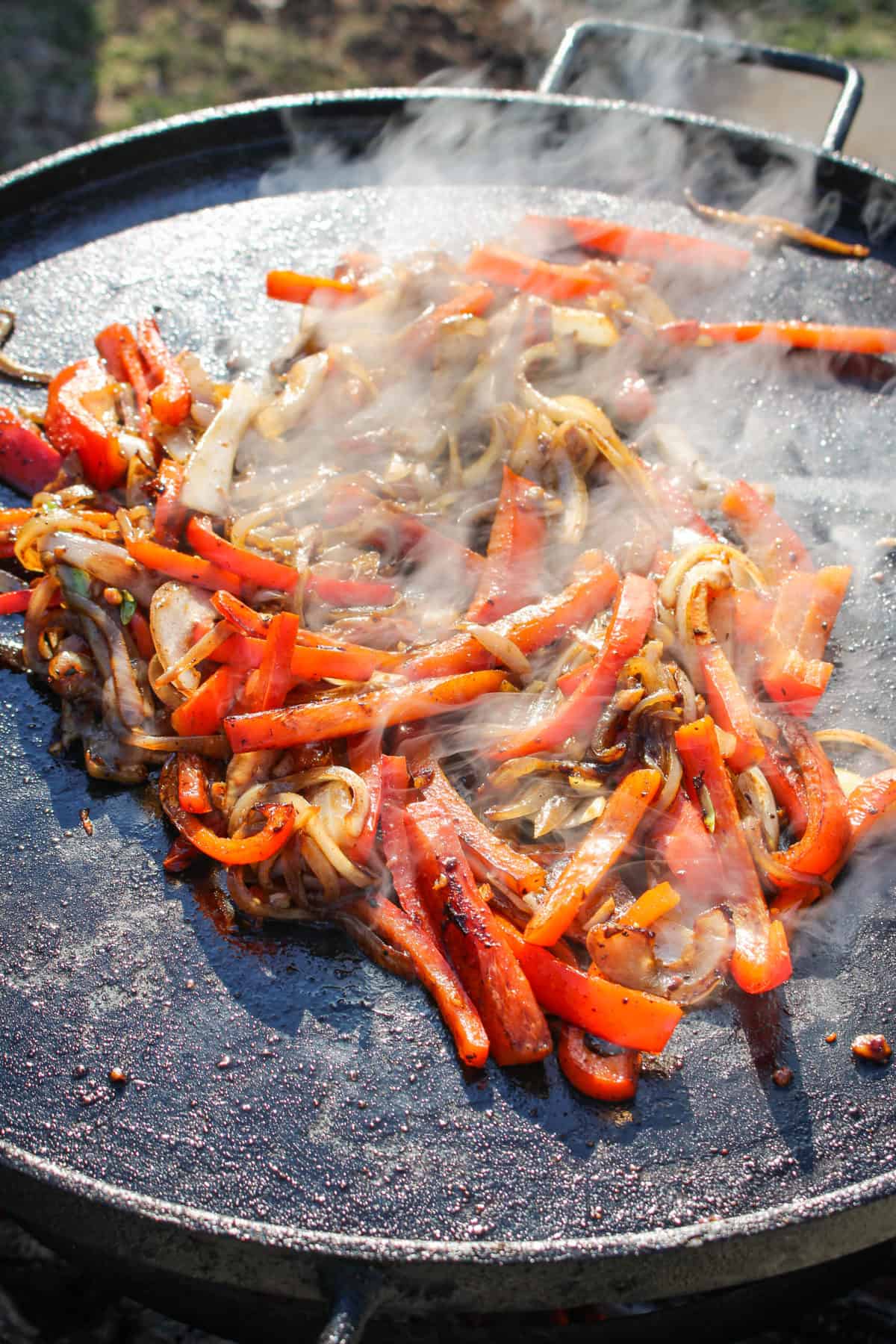 Sprinkle your veggies with salt, pepper, and garlic powder, then cook for 7-9 minutes or until softened.

Allow them to cool and clean out your skillet for the next part of your cheesesteak quesadilla prep!

So, now we assemble! First, allow the skillet to cool to medium heat around 300ºF, because although we want a slightly crispy quesadilla, a burnt one isn’t great.

Layer a large flour tortilla into the pan, then top that with 2-3 slices of provolone cheese, because the cheesier the better, right? I use provolone cheese because it’s a Philly cheesesteak classic, but any type of melty cheese will work. Just use your favorite! 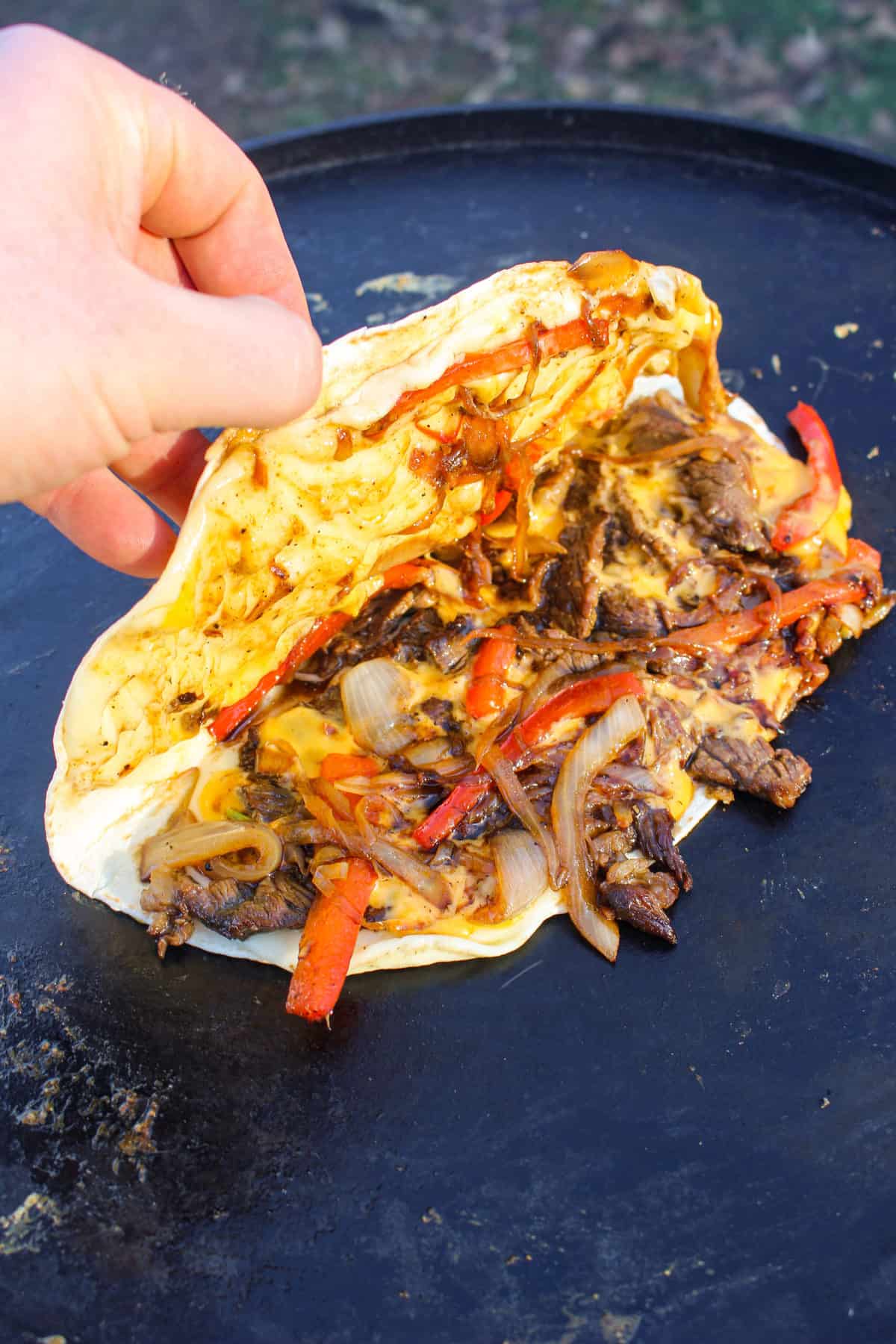 Next, add a layer of veggies to the cheesesteak quesadilla, then top that off with the cooked and sliced steak.

Drizzle the quesadilla filling with cheese whiz, then fold the tortilla over and allow it to toast for 1-2 minutes on each side. The best kind of quesadilla is the crispy kind!

Make as many quesadillas as you need. Prep as much steak and veggies as you will need and assemble the quesadillas quickly, so they’re all still warm when you’re ready to serve.

Next, warm up some cheese whiz for dipping, then slice up the quesadillas and dig in! 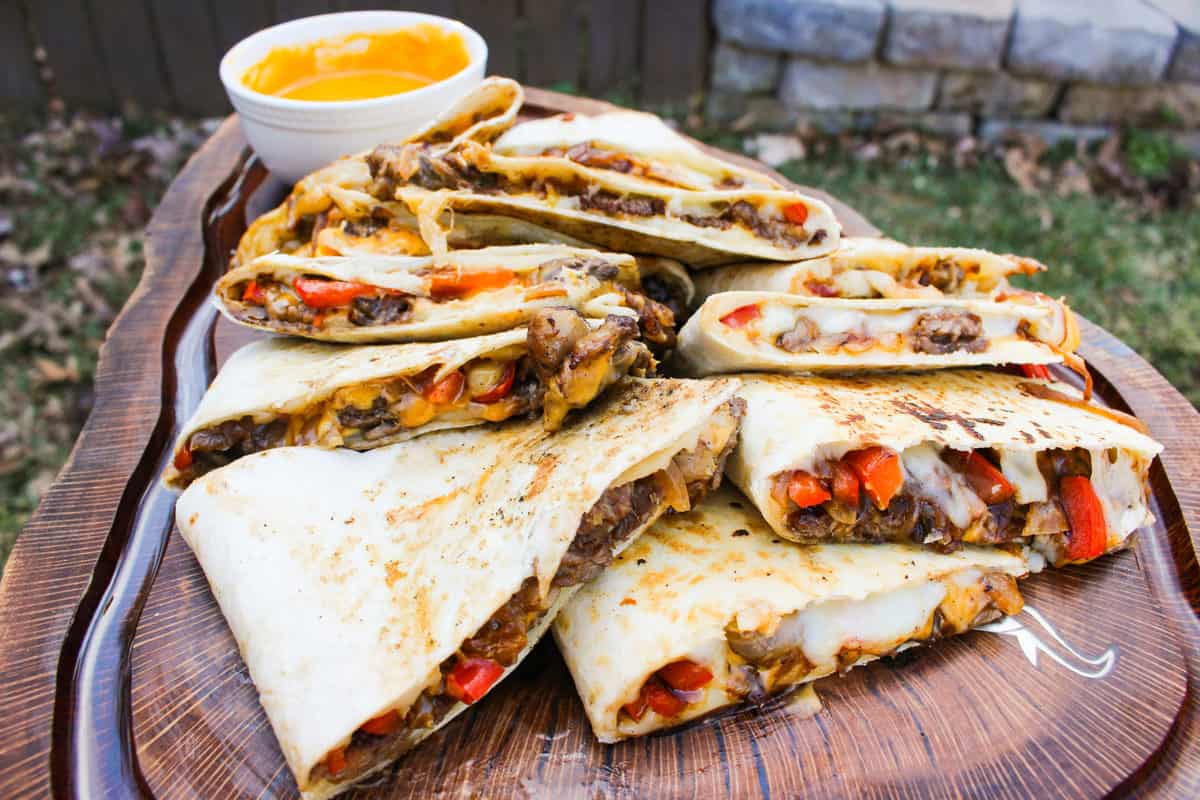 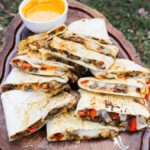