Bourbon Bacon Pecan Salmon for a sweet, savory, and nutty way to enjoy your next salmon filet. This salmon is smoked on top of orange slices, brushed with a Buffalo Trace bourbon glaze, topped with a Bourbon Prime pecan crust and garnished with a bit of parsley. Enjoy all the mouth watering deliciousness in a single bit off this smoked salmon, it’ll have you coming back for more and more!

Bourbon Sets Us Up for Immediate Success

We kick things off with our glaze, and let’s just say its no plane Jane glaze. It’s a bourbon glaze… which naturally makes it a thousand times better. I teamed up with Buffalo Trace for this Bourbon Bacon Pecan Salmon Recipe, so you know that’s the secret to the sauce for this one.

First, I placed a cast iron skillet on my grill grate directly over the flames. Let the skillet preheat before adding in that Buffalo Trace Bourbon. Let this simmer for a bit before adding the remaining bourbon glaze ingredients. The smooth, sweetness of the Buffalo Trace brought such a unique and enhanced taste to this glaze. The way it pairs with the savory Bourbon Prime seasoning and nutty pecans was incredible. So many flavors, yet so balanced. Love it when that happens.

Continue stirring the glaze as it begins to thicken. Then remove it from the heat and set it to the side. Now, it’s Bacon Pecan Salmon time. 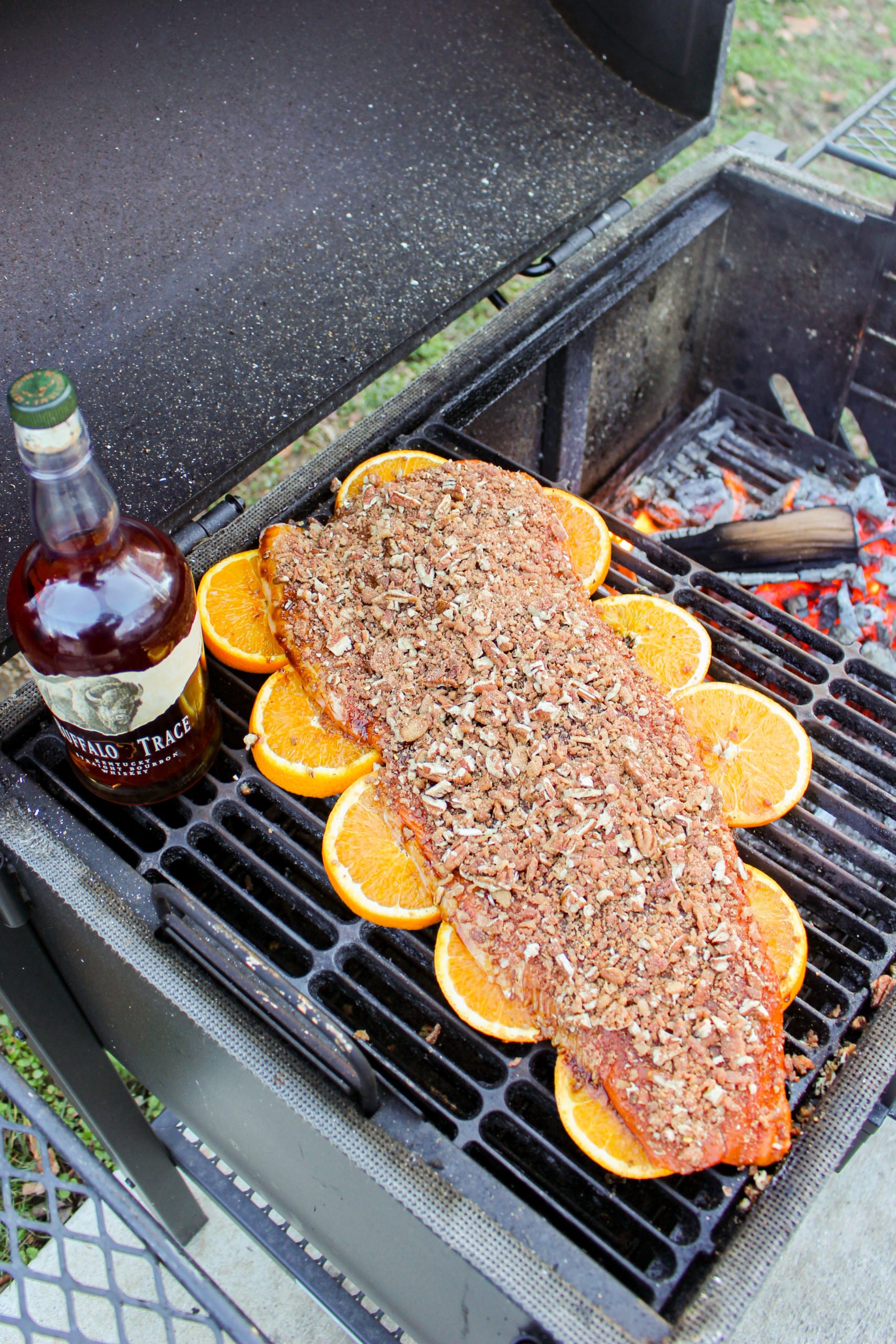 Bacon Pecan Crust for our Salmon

Before placing the salmon on the grill, we have to do two things. First, move the grill grate to the opposite side of the grill, away from the coals. We want to smoke the salmon slowly, so we’ll utilize an indirect style of cooking from this point on. Secondly, we need to lay down our orange slices.

The orange slices do a couple of important things for our Bourbon Bacon Pecan Salmon. The most important role they play is preventing the salmon from sticking to the grill grate. The salmon filet I use has its skin removed and would be impossible to remove from the grill without the orange slices to help hold it all together. The orange slices also provide a slight tangy flavor to the salmon since the meat is sitting directly on top of it while it cooks. You’ll notice that I actually added some orange juice to the bourbon glaze to help enhance this flavor. 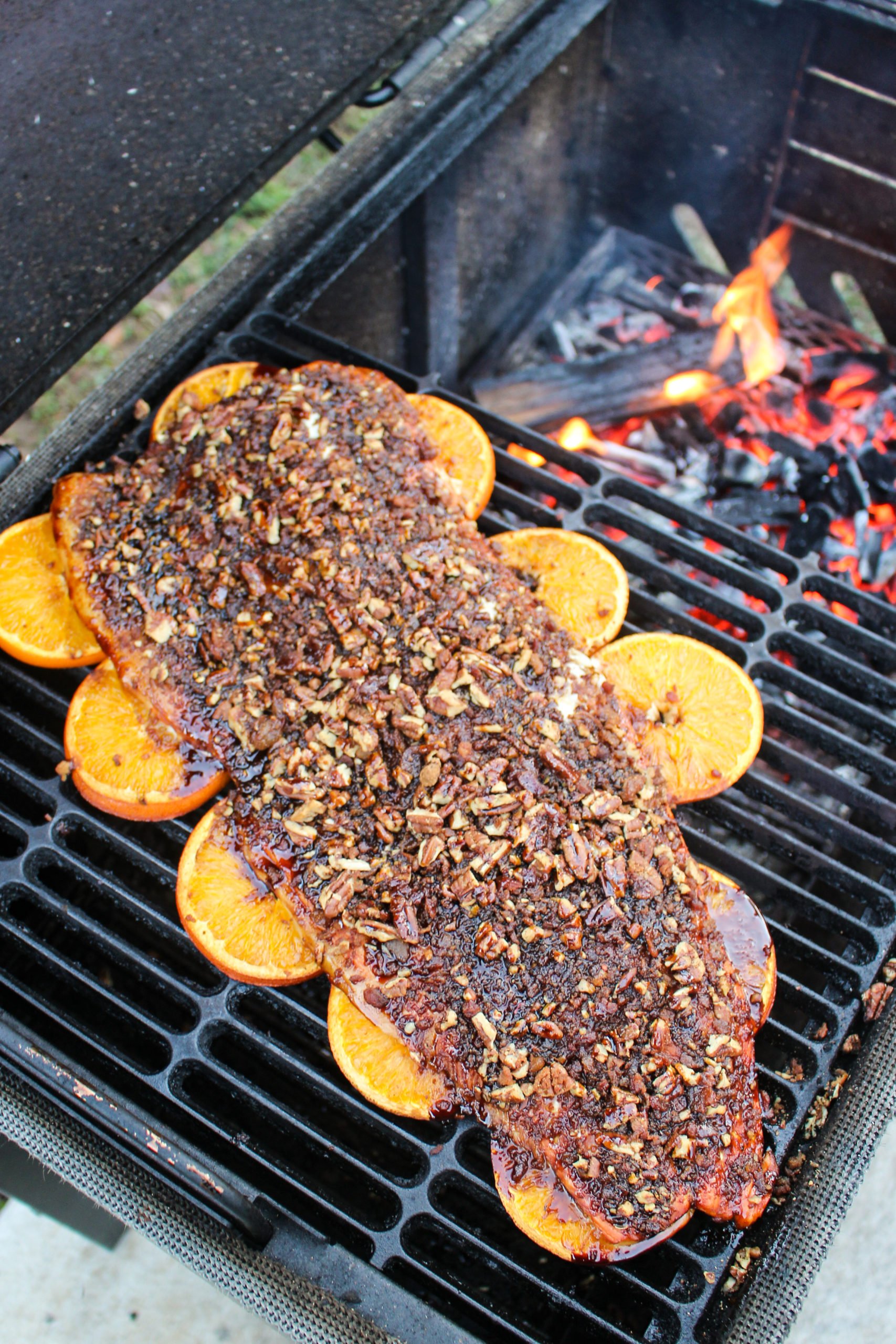 After the salmon is finished cooking, garnish it with some chopped parsley and serve it up! You can either serve the salmon directly from the grill, using a spatula to cut and pull single positions and place it directly on a plate. Otherwise, you’ll probably need two spatulas to lift the front and back portions of the filet to remove it from the grill entirely and place it on a serving platter.

This Bourbon Bacon Pecan Salmon was so tender, literally a melt in your mouth kind of dish. The sweet and nutty bourbon glaze along with the pecan crust was unlike anything I’ve tried on salmon and I thought all the flavors paired really well together. I hope you’ll enjoy it too! Cheers! 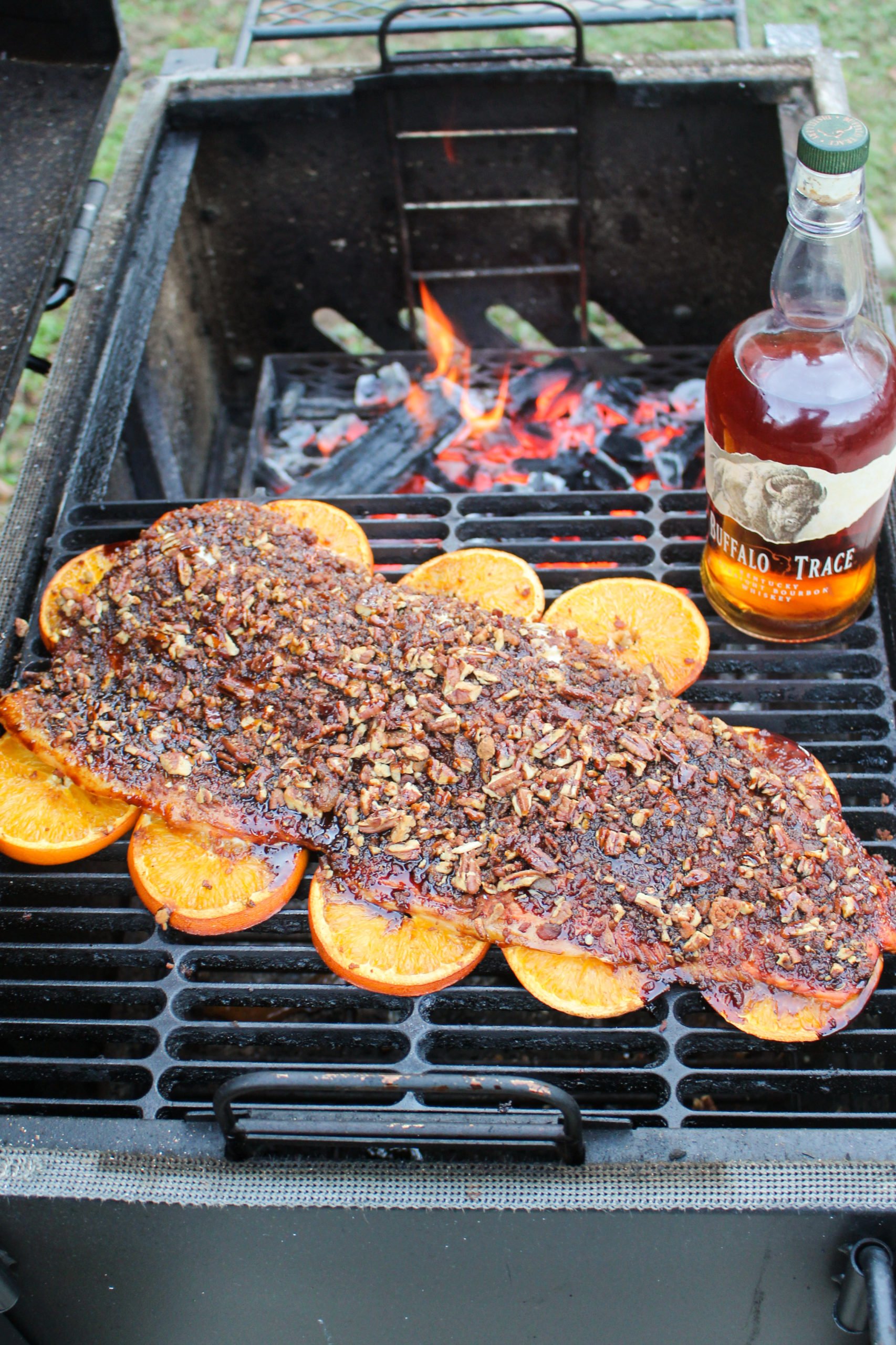 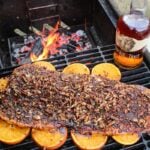