Chimichurri and Cheese Stuffed Picanha for the perfect twist on one of my favorite proteins. I love topping picanha with some fresh chimichurri sauce, so how about throwing some cheese in the mix for a stuffed picanha? Let’s freakin’ gooooo! Set this guy on the smoker and finished with a quick sear for the ultimate dinner. Here’s how it all went down.

Shimmy for the Chimi

Like any dish, fresh ingredients are the key to success. This is especially important for chimichurri because the base of this sauce is parsley. Grab a nice, fresh bundle of parsley and get to chopping. I also threw in some scallions along with freshly minced garlic. Salt, pepper, red wine vinegar and red chili flakes are also staples for my chimichurri, which is perfect basted over everything from this big cut of beef to my favorite loaded choripan sandwiches!. The only thing I changed for this Chimichurri and Cheese Stuffed Picanha recipe was the amount of olive oil. I typically add olive oil to my mixture until I find the sauce consistency I like. However, because this was going to be more of a stuffing instead of a sauce, I cut back on the amount of olive oil used.

Next, grab your shredded mozzarella and place it in a large bowl. I decided to go with mozzarella for this recipe because it’s easy to melt and the mild flavor doesn’t clash with my other seasonings. If you prefer another cheese that’s fine! Feel free to switch it up, but take caution in swapping for a cheese that’s bold in flavor. It could overpower the other ingredients if you’re not careful. Now, add the chimichurri to the cheese and mix it together thoroughly. Once all the ingredients are dispersed evenly we can turn our attention to the picanha.

Seasoned with my Gaucho Steakhouse Seasoning. Get yours here!

Like Stuffing a Turkey, but with Picanha and Cheese

Picanha is one of my favorite beef cuts to cook. It’s unique look is always an attention grabber, and the buttery fat cap is a flavor knockout every time. The first thing we need to address for our picanha is creating the pocket for our stuffing. Take a knife and make a cut in the center of the meat. From the original slice, carefully work your way further back and around the sides of the meat. Remember, we’re only creating a pocket here and not slicing all the way through.

Once you’re happy with the meat pocket you’ve created grab the bowl of chimichurri and cheese stuffing. Handful by handful, generously fill the pocket with the mixture. Once you can’t fit anymore into the pocket, reach for some toothpicks and (to the best of your ability) secure the opening with the toothpicks. You’ll likely lose some filling during the cooking process, but that’s okay! That is why we filled it so generously to begin with.

Serving Up this Chimichurri and Cheese Stuffed Picanha

After the picanha is stuffed and secured, place it on the smoker. Keep it here for 2-3 hours, or until it reaches an internal temperature of 125 degrees Fahrenheit. Once it reaches temperature pull it off the smoker. Then, clean off the grill grate and pull the coals up a couple levels within the smoker so that’s it sitting closer to the grill grate. Close the lid to the smoker for a couple minutes, letting the grill grate get nice and hot. Then grab the picanha and place it fat side down for a minute or two, or until it gets a nice sear on the outside. Then flip it over and do the same.

Once you’ve seared both sides of the picanha, pull it off the grill and let it rest. This would also be a good time to remove the toothpicks that you originally used to seal the pocket. Finally, when it’s finished resting you can slice into the picanha and serve it up! Best enjoyed with friends and family. Cheers! 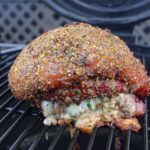 I love topping picanha with some fresh chimichurri sauce, so how about throwing some cheese in the mix for a stuffed picanha? Well, I did it and it was delicious!