Okay, yeah, you’ve had wings before. But have you ever had Colorado Golden BBQ Wings while camping? Didn’t think so.

There are plenty of ways to enjoy chicken wings. But I feel like maybe you’ve never truly enjoyed chicken wings until you’re sitting outside, looking at the mountains, and munching on made-from-scratch Colorado Golden BBQ Wings while RV camping in Colorado.

Okay, I take that back. These Colorado Golden BBQ chicken wings are delicious anywhere and anytime! I start by slathering these tender chicken wings in a ridiculously flavorful spice rub. Then I sear them to achieve a nice crust before frying them until they’re golden-brown and crispy. The cherry on top is the golden BBQ Sauce.

This recipe will have chicken wing lovers everywhere drooling!

First things first, we have to season the meat. I seasoned the chicken wings with a simple spice rub made up of salt, pepper, garlic powder, onion powder, brown sugar, chipotle powder, and cumin. 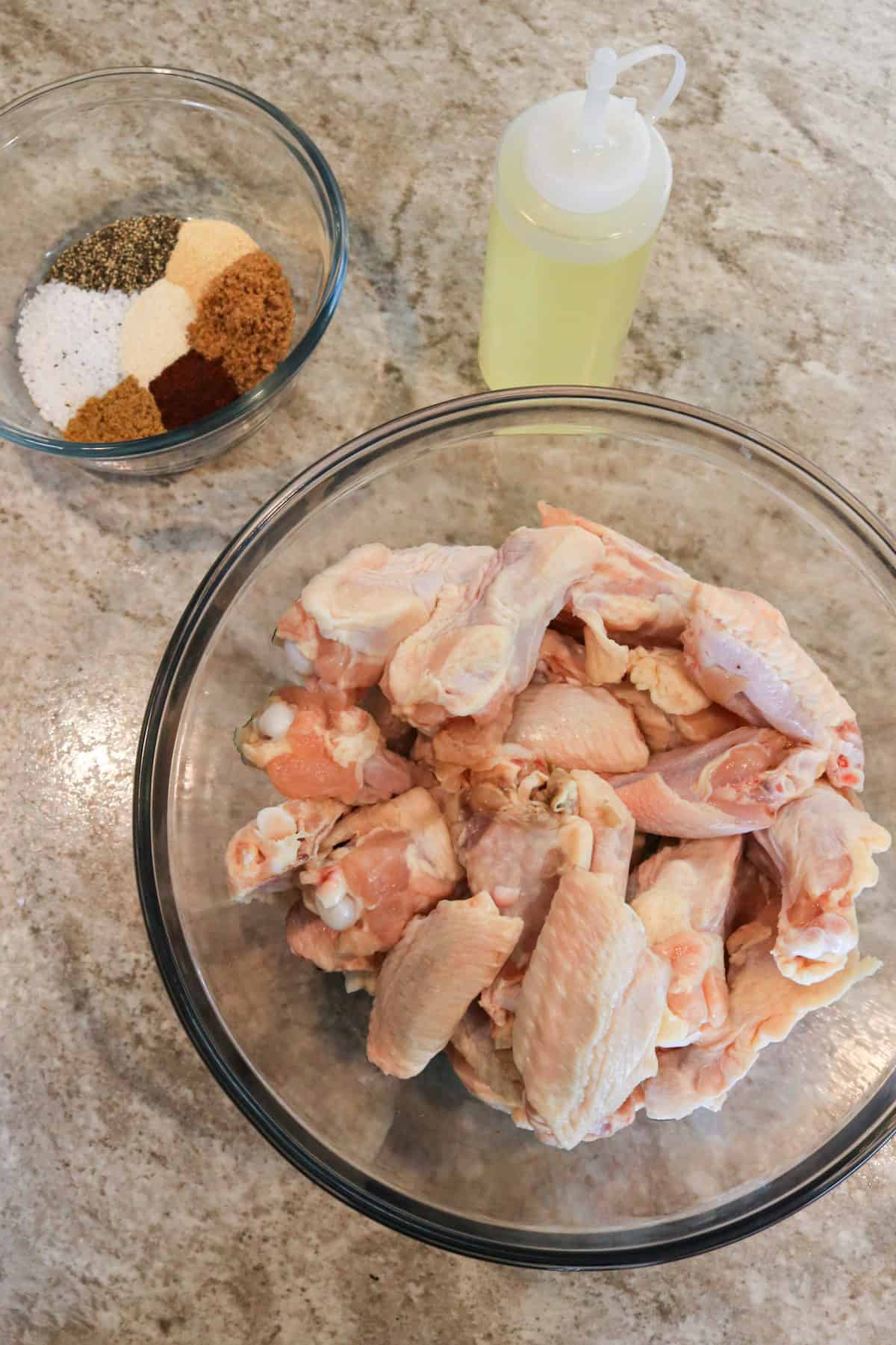 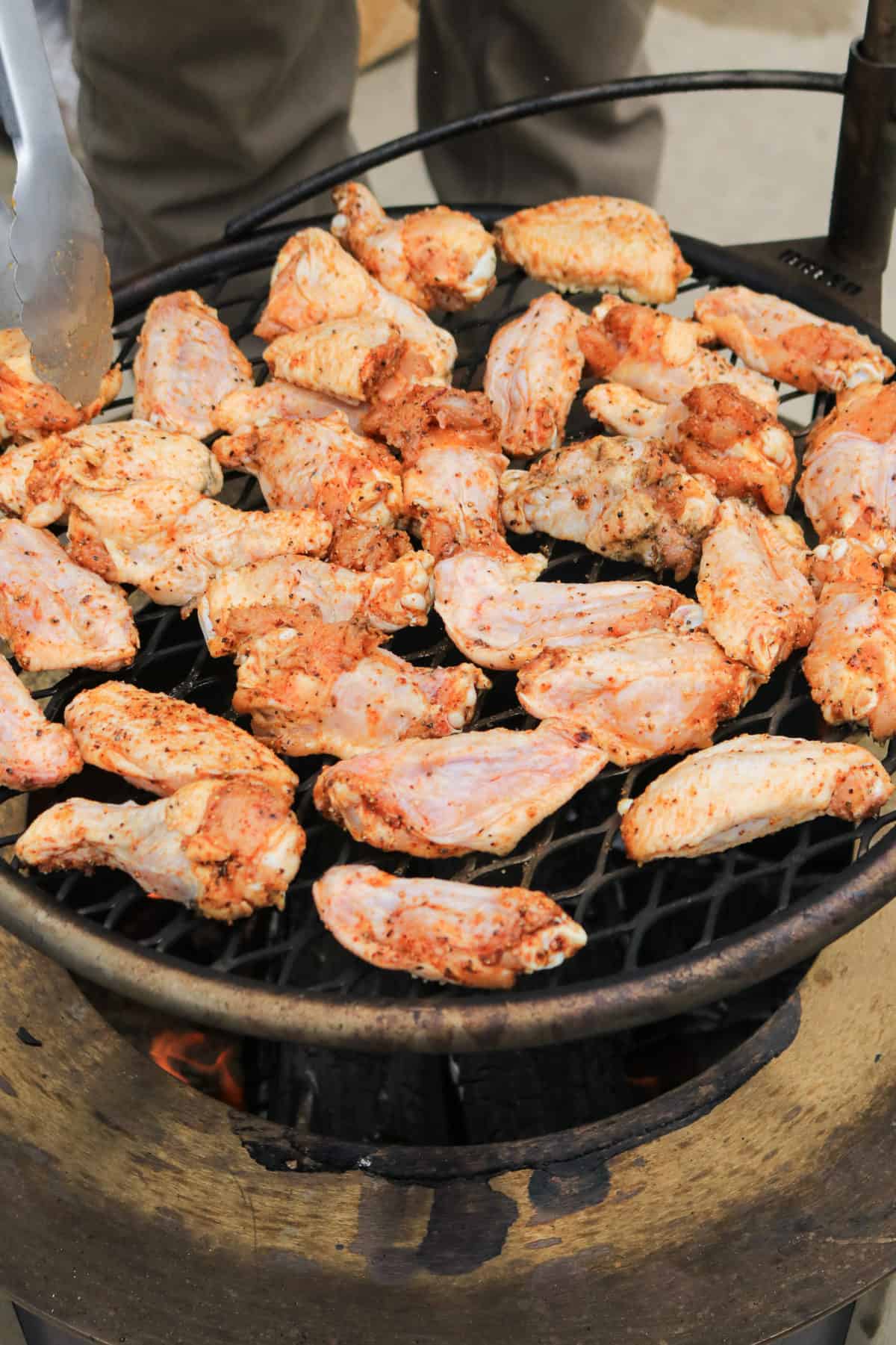 The easiest way to do this is to place everything into a bowl together and then to use your hands to mix it up. Make sure the chicken is fully coated in the spice rub so you get that flavor in every bite. After that, let the wings sit while you make the sauce.

Once the chicken wings have had a little bit of time to soak in the flavors from the spices, it’s time to cook it. We sear it first on the grill to lock in the flavor and moisture of the meat, then we fry it in a skillet with oil until golden-brown and crispy. 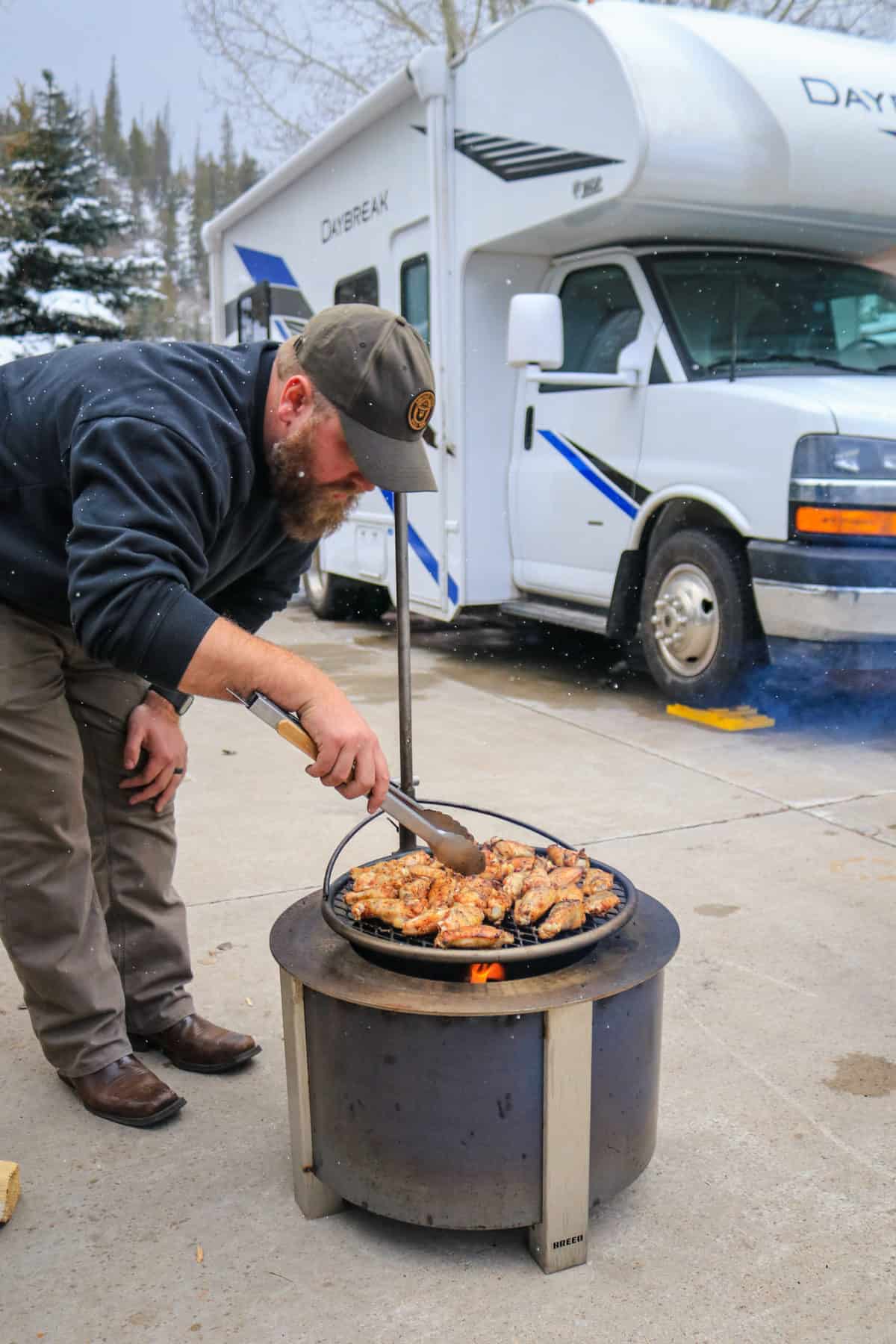 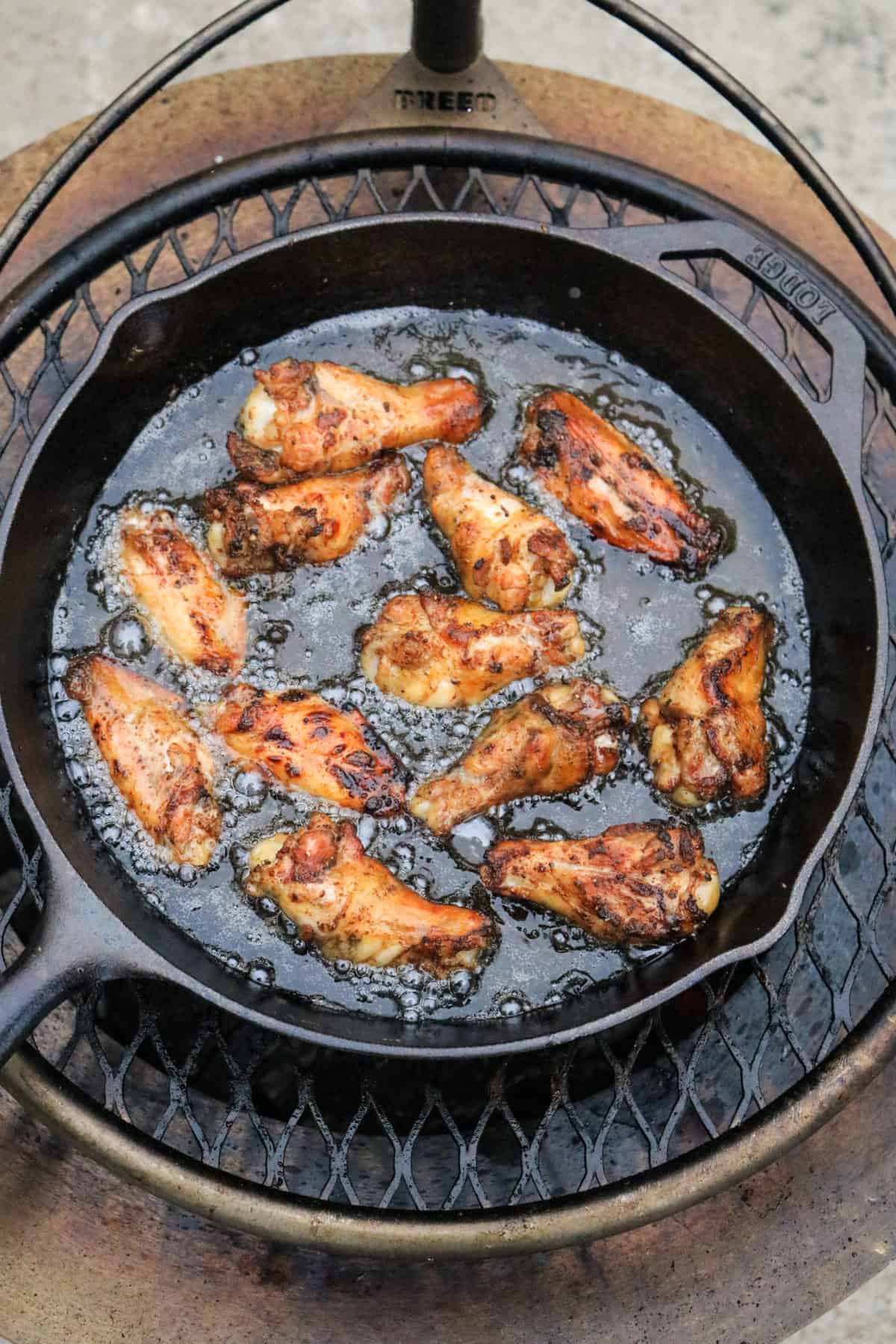 Considering all of the sweet, smoky, spicy flavors that went into the spice blend for the chicken, could this recipe get any more flavorful? Yes. Yes, it could. The golden BBQ sauce takes the chicken wings from good to great. I probably could have eaten this sauce out of a bowl on its own but I figured it would be better slathered over chicken wings. It was. Bonus: it’s so easy to make.

You’ll start by heating a cast-iron skillet on the grill. Once the skillet is heated, add in a light beer of your choice. Follow that up with apple cider vinegar, dijon mustard, garlic paste, Worcestershire sauce, hot sauce, honey, and brown sugar. Stir often while the mixture heats to get rid of any clumps that might form. You want the sauce to be smooth! Once the mixture has thickened and turned a golden, caramel-y color it’s ready to be added to the chicken wings! 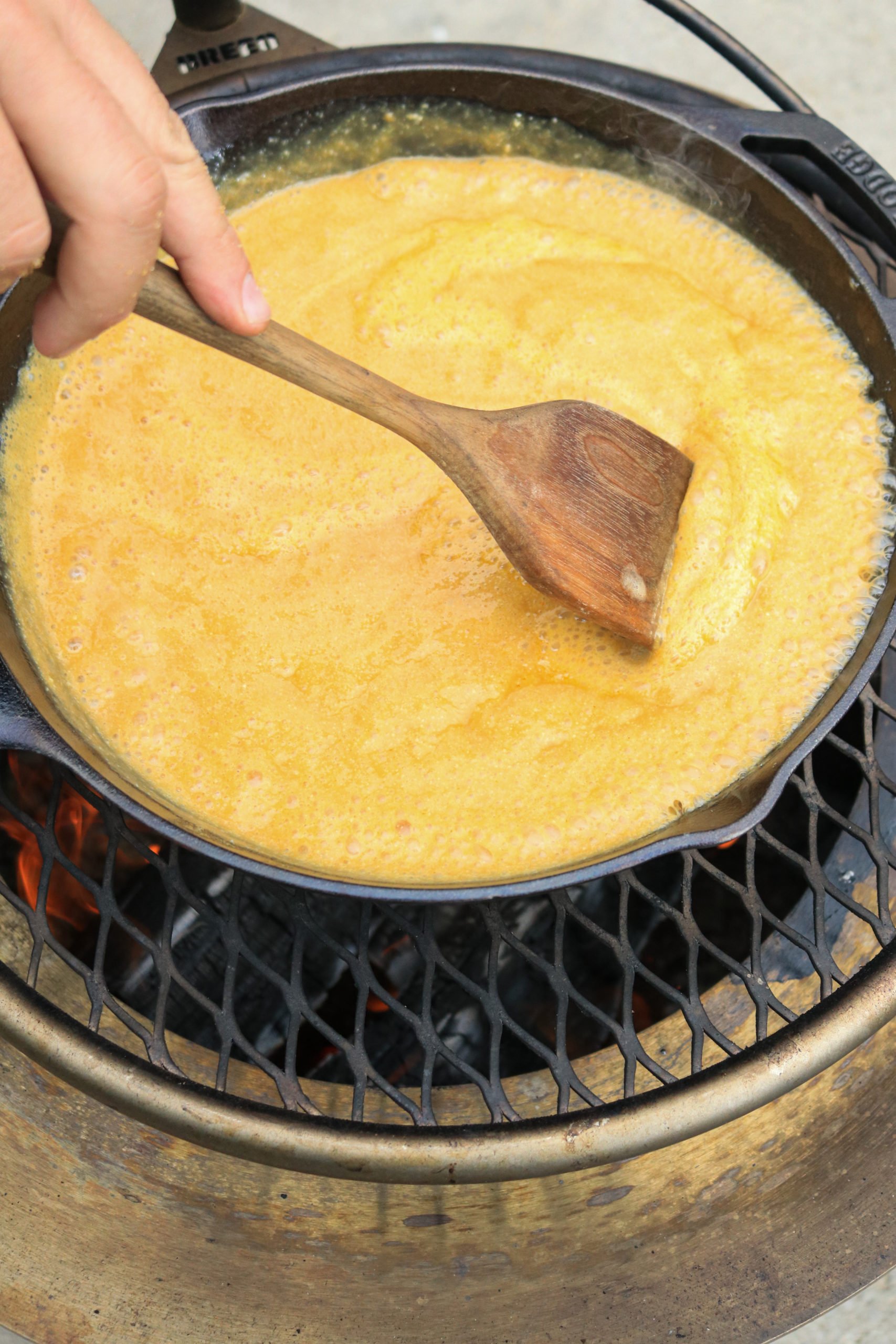 Now, let’s put it all together. Place the cooked wings in a large bowl and drizzle the sauce on top of the wings. I gave my wings a good toss to ensure each wing received a generous coating of that golden BBQ sauce!

I garnish the plate of chicken wings with a sprinkle of fresh parsley. This adds freshness and a little bit of color. 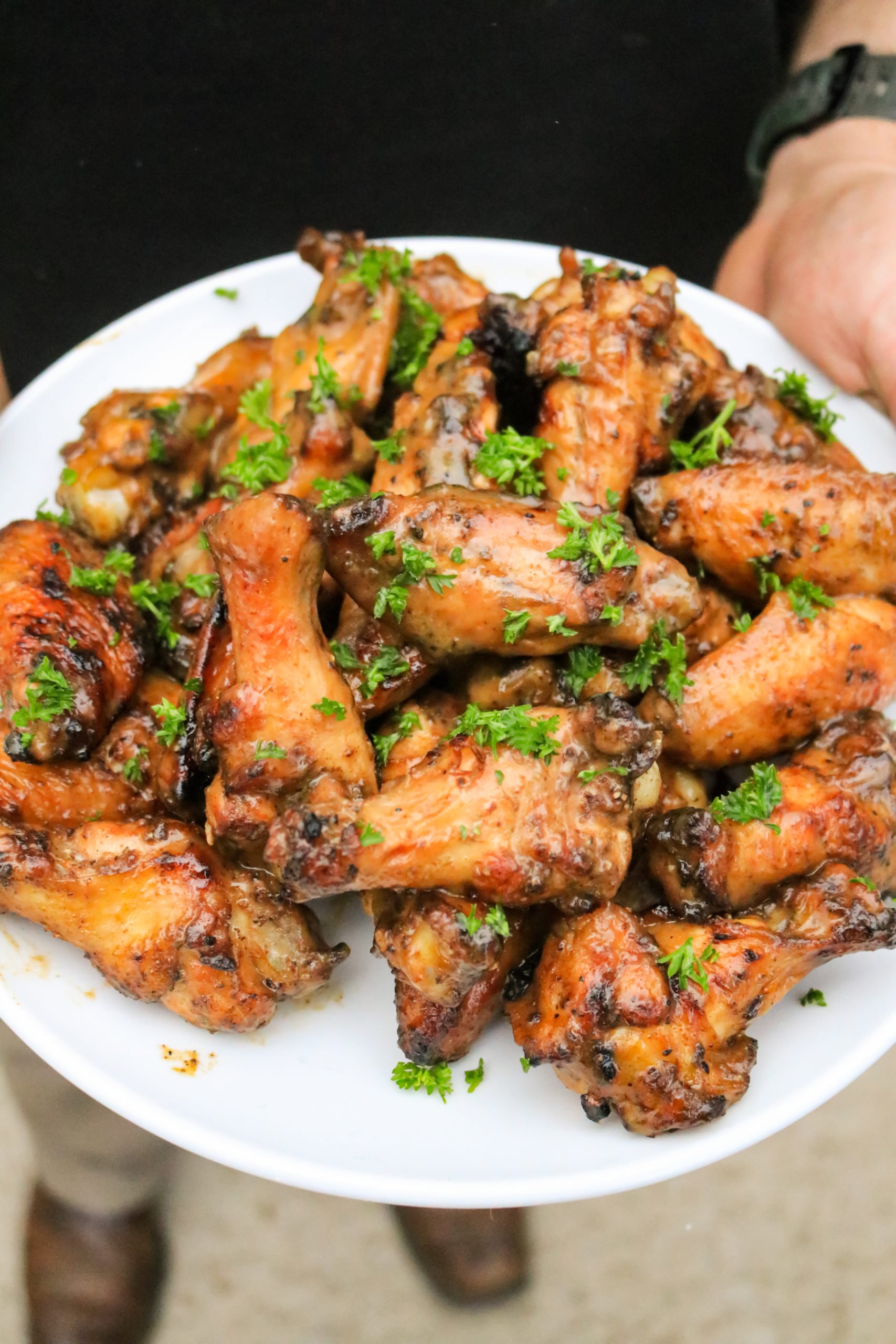 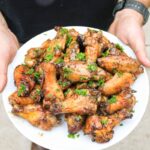