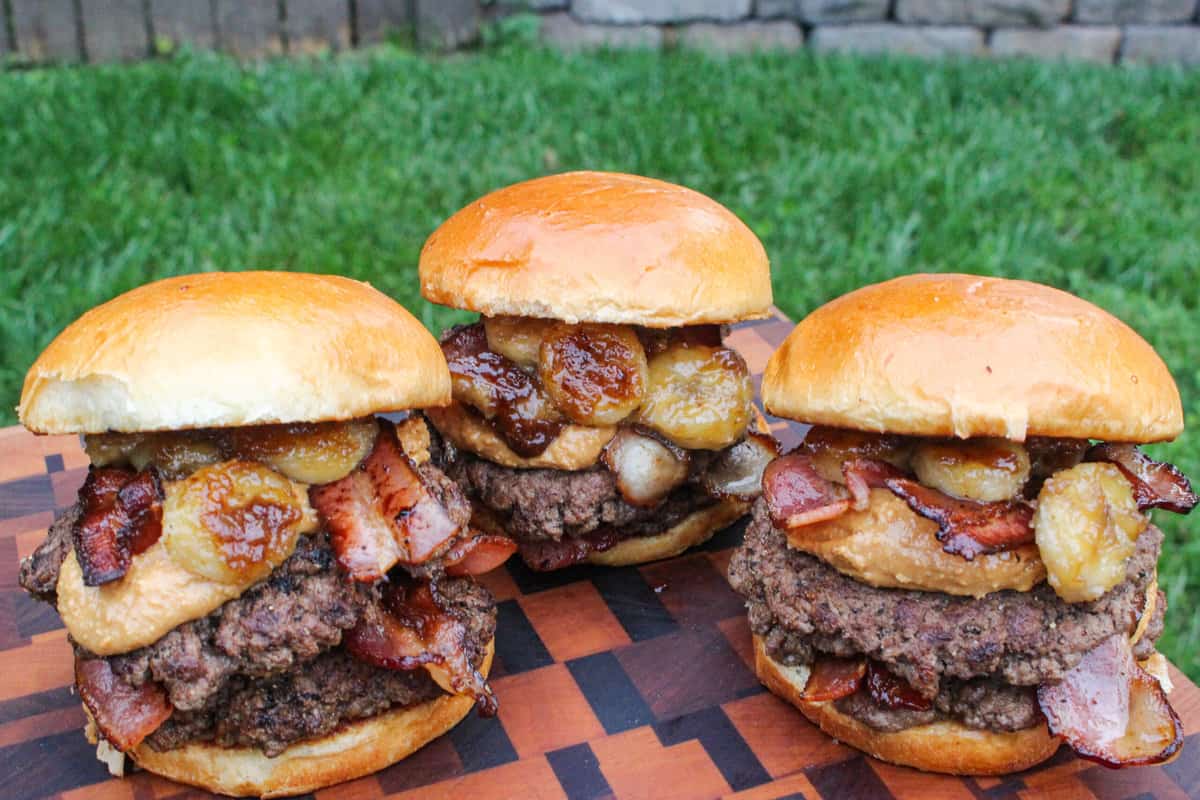 Newsflash, it’s now June. June means summer, and summer means burgers! Today we’re coming at you with a new Elvis Smash Burger recipe! Does this recipe include peanut butter? Yes. Does it also include bananas? Yes! Before you turn your nose up at it just remember, this recipe was inspired by The King. You wouldn’t tell the King he’s wrong… Would you? Let’s get swinging to these details below.

Living in Nashville, we pride ourselves on music. Yes, it’s mainly country music, but what most people don’t realize is that there are all types of music produced in Nashville. With Graceland being so close by (hi Memphis!) it only seemed right that it was time to make a burger fit for not a King, but THE King.

Believe it or not, Elvis Smash Burgers are actually a thing. If Elvis was going to have a burger, it was going to contain three staple ingredients: bacon, bananas and peanut butter. I can see how this could get you All Shook Up, but it’s actually incredible. Sometimes you’ll see pickles added to the burger, but I opted for some hot pepper jelly. No real reason for this outside of the fact that I like hot pepper jelly and thought it would pair well. I was right. It was delicious. 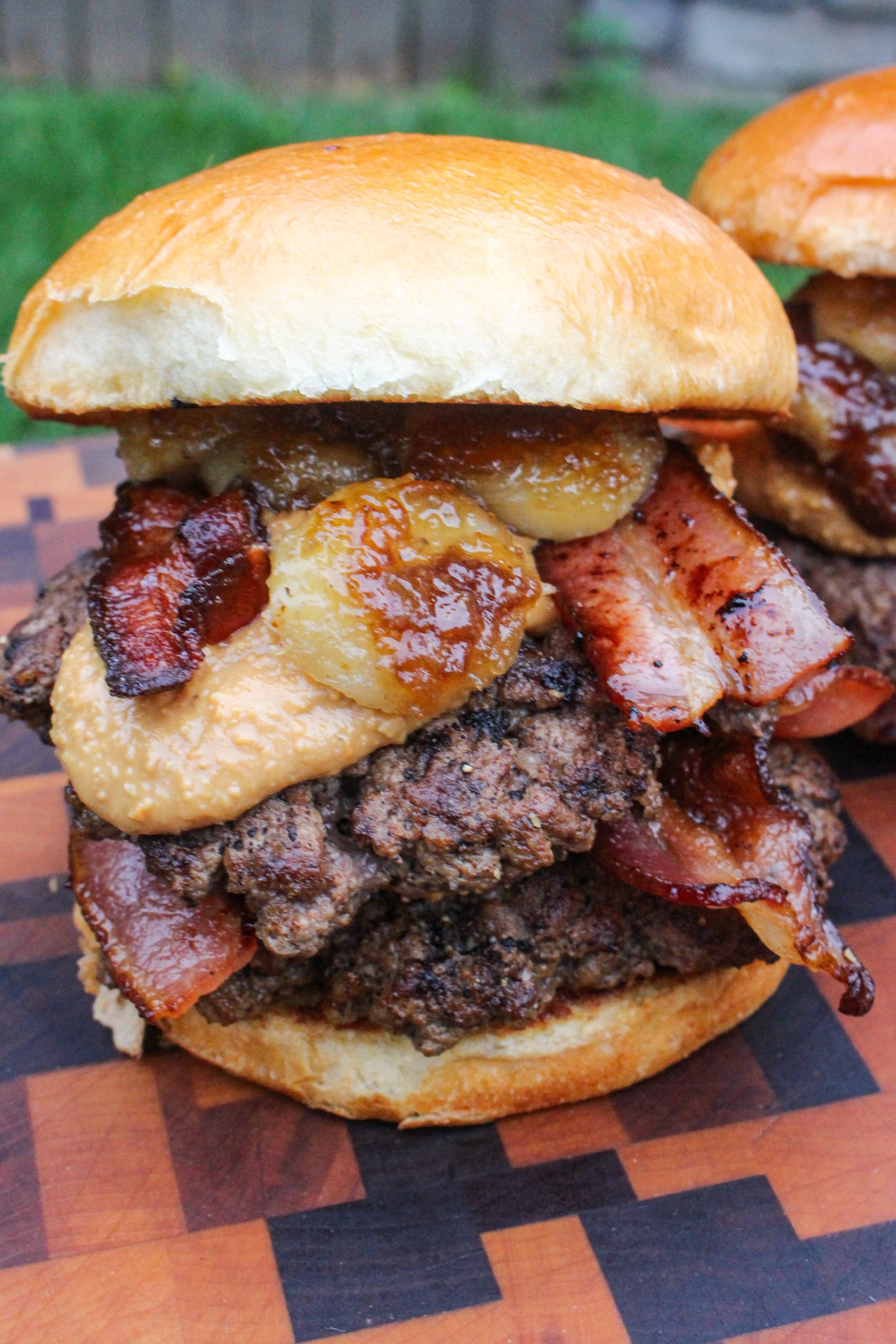 I kick this recipe off by caramelizing the bananas. Start with a hot cast iron skillet and toss in some butter. Throw the bananas and brown sugar in as the butter finishes melting. It’s important to stir this continuously, burning will happen fast otherwise. Once the brown sugar thickens and sticks to the bananas, pull them from the fire and remove them from the skillet.

Up next for these Elvis Smash Burgers is the bacon. I placed my plancha over the fire to preheat. Once it was hot, I placed the bacon down to cook. This is another item I would recommend staying close by while it cooks. This is because bacon also cooks pretty quickly and no one wants burnt bacon on their burger. Flip the bacon as needed and remove from the skillet once the bacon is your desired level of cookness. 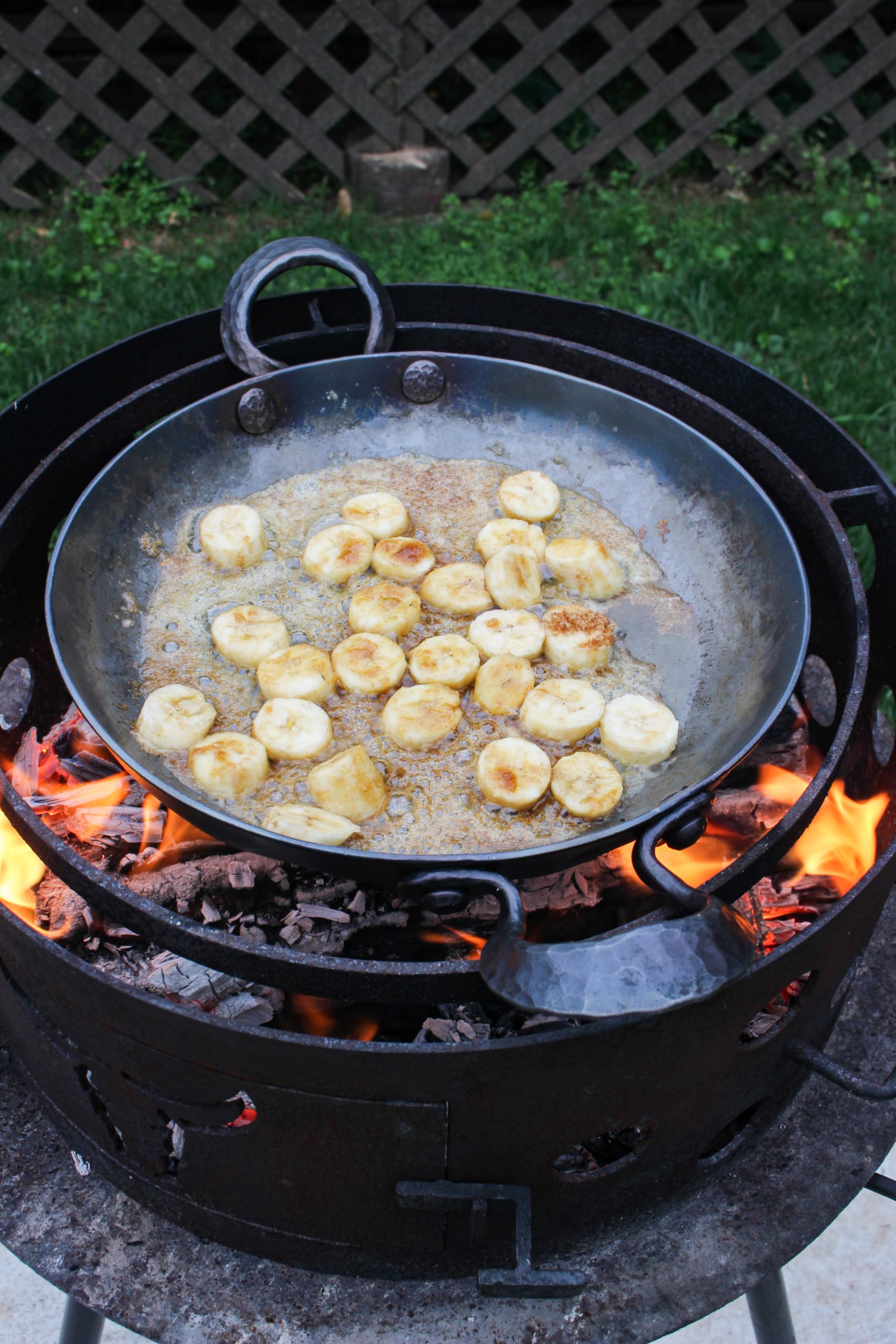 All that’s left are the burgers. Place each burger around your skillet, leaving enough room for them to not touch each other after they’re smashed. Then, I shook some salt, pepper and garlic onto each burger while it began cooking. Shortly after seasoning the burgers I started smashing them.

Smash Burgers pro tip: place some wax paper between your spatula and the patty. This will keep the ground meat from sticking to the spatula as you smash the burger patties. After smashing all the burgers, I flipped them and seasoned the other side of the patty with my salt, pepper and garlic blend again. 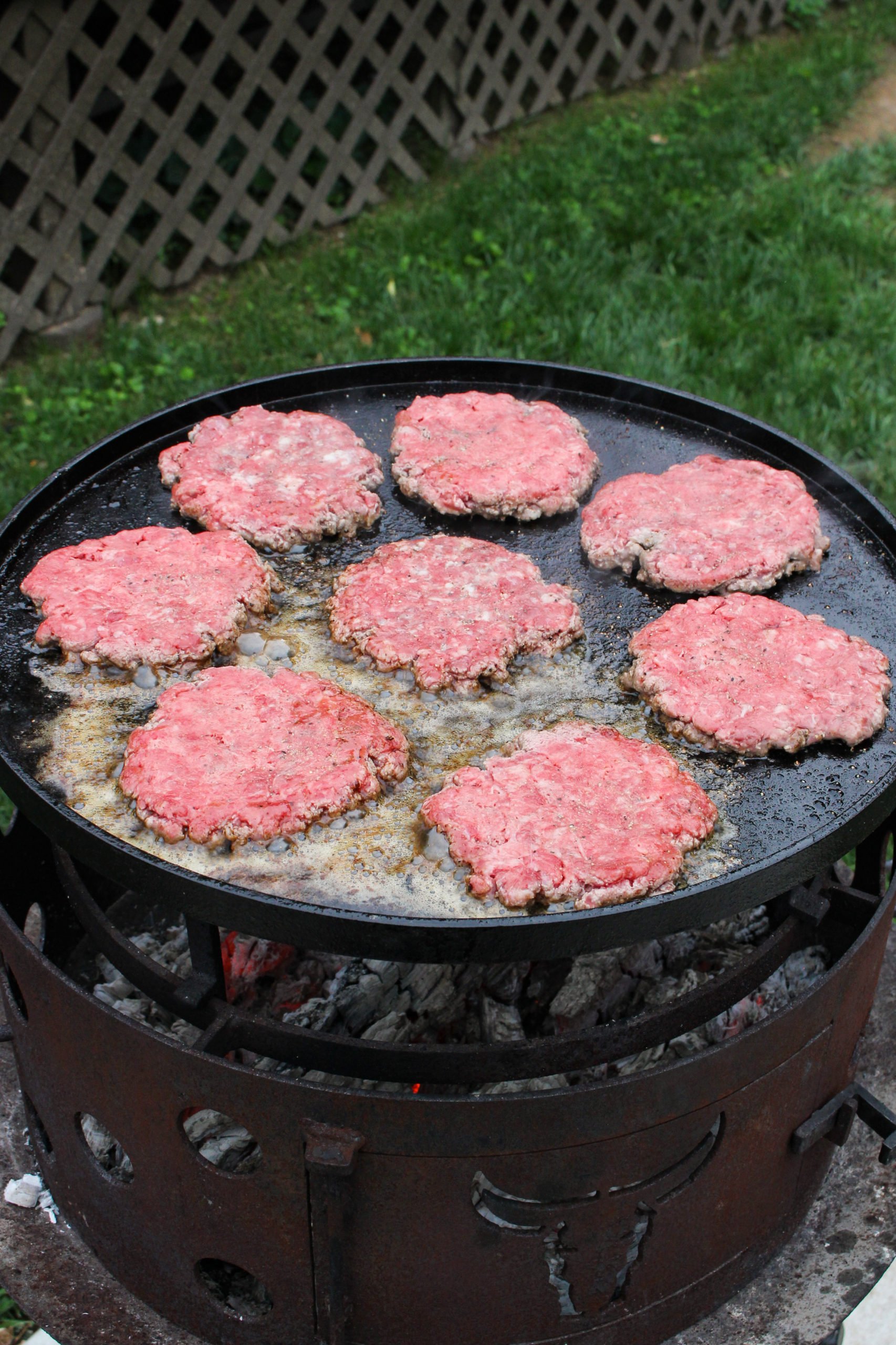 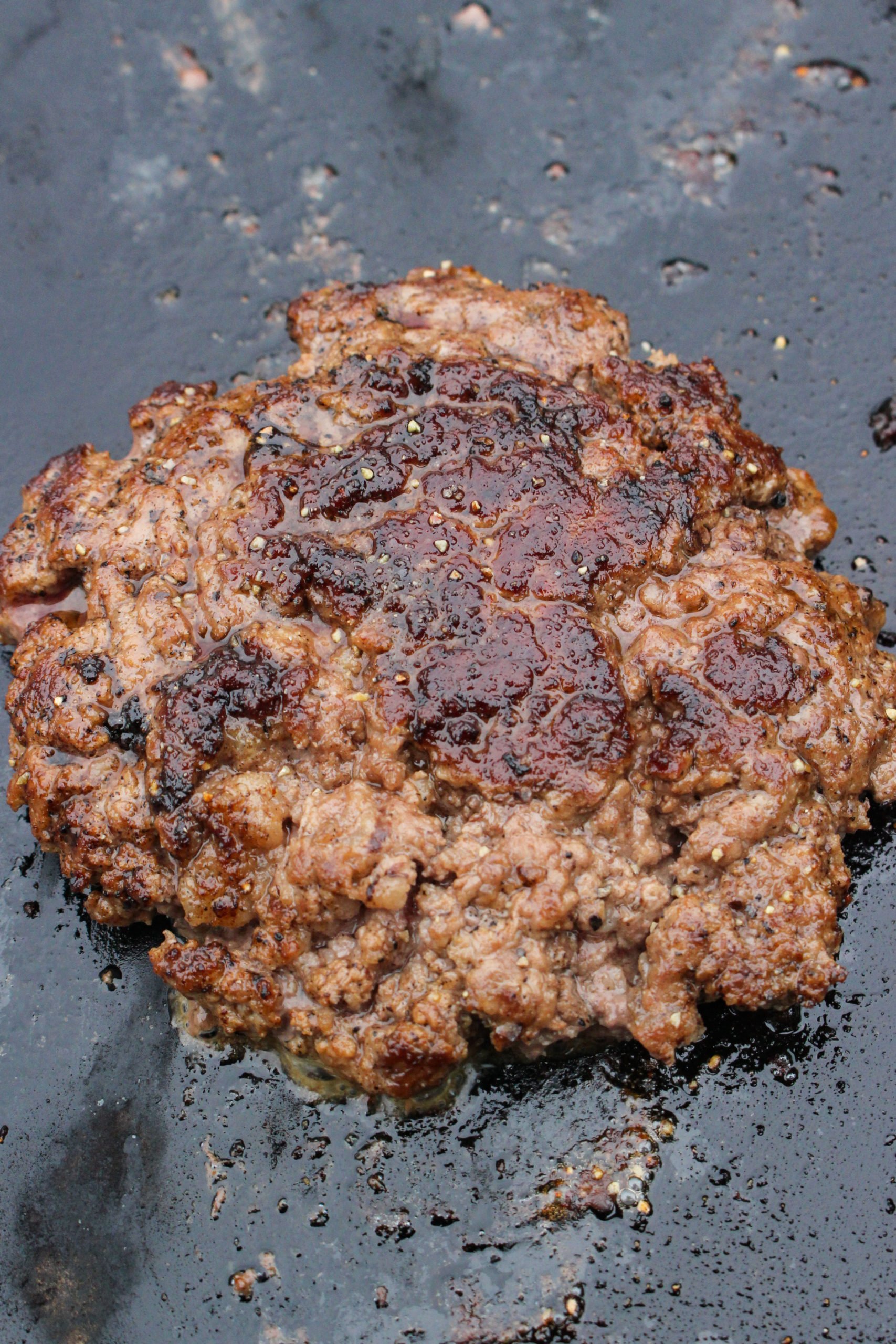 A Meal Fit for A King

As the burgers finish cooking pull them from the grill. Now, let’s assemble these Elvis Smash Burgers! I quickly toasted the buns and then covered the inside of one bun with my hot pepper jelly. Up next was the patty, followed by a tablespoon of peanut butter and then two slices of bacon. Who’s up for a double? I’m always up for it, so I topped the peanut butter with another patty, another tablespoon of peanut butter and more bacon. For this recipe, it’s not about the cherry on top, but the caramelized bananas! A spoonful of golden bananas on top of that last layer of bacon was the ticket.

From here, you know what to do. Grab your family, ask Alexa to play Elvis on Spotify and chow down on these burgers. Cheers! 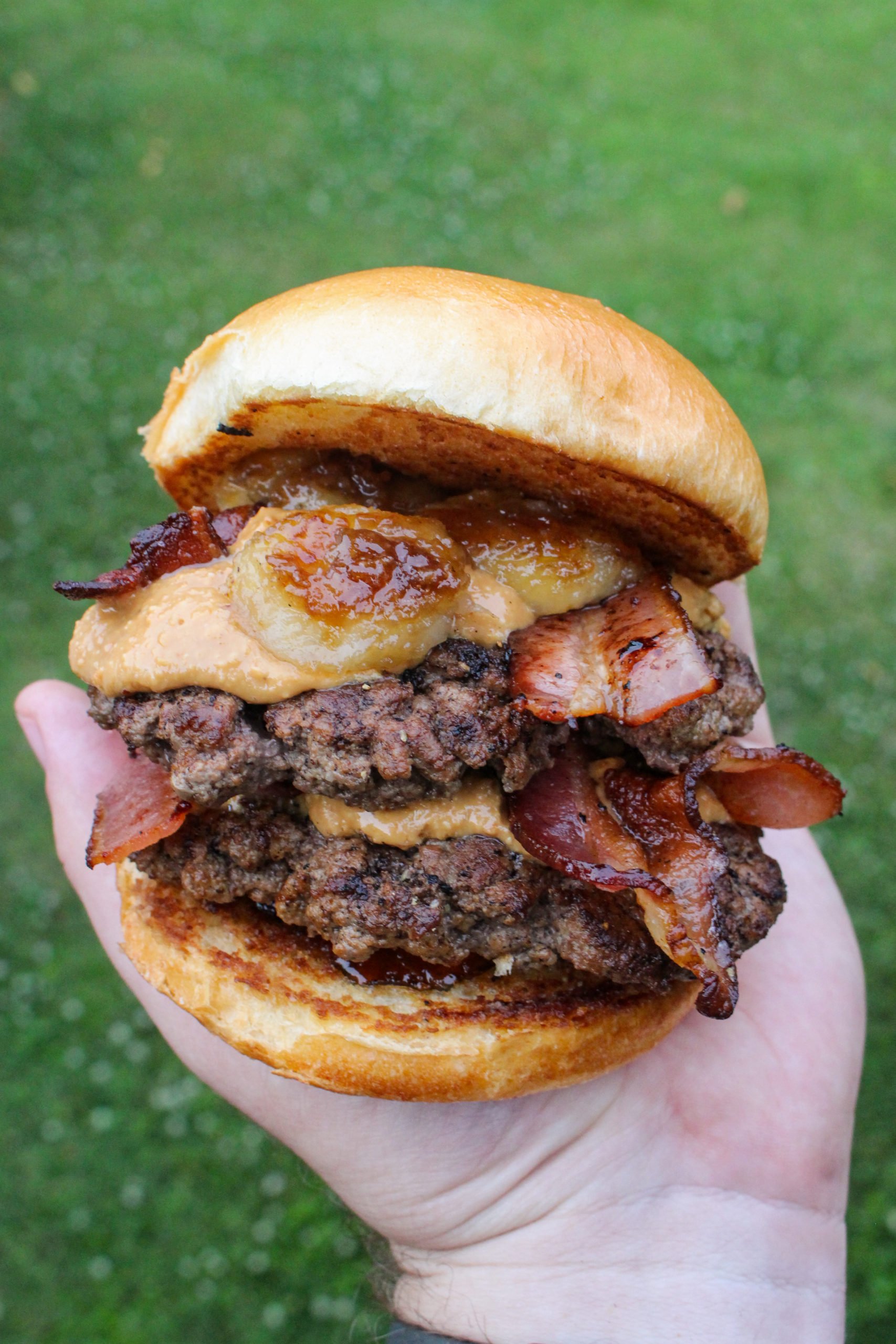 My cookbook is out! Order your copy of Food X Fire today! 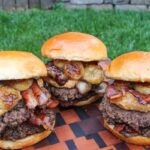