Ya’ll have probably had a cheesesteak pizza at some point in your life. Sliced steak, peppers, and onions on a pizza.

No big deal, right? But what if we reversed it?

What if we put a pizza on a cheese steak? Some bomb A garlic bread as the sando bread. Marinara, of course. Piled high with the finest sliced steak, peppers, onions, and cheese. So much cheese.

This sando isn’t for the casual gourmand. This culinary delight, this culinary fusion, this masterpiece is one for the books.

Meat Selection for our Pizza Cheesesteak

This is a meat dish. As much as it’s a handheld, a sandwich, a sando; meat is the star of the show.

There’s 2 lbs of meat here. Being the star of the show, this is where you drop the big money, so make the investment and earn the rewards.

Prepackaged “shaved beef” is slightly above the mystery meat that your high school cafeteria served. Like that shoe company says: Just don’t do it.

Plus, it’s not worthy of this Pizza Cheesesteak!

Eye of round is popular for beef sandos, mostly because it’s a step above shoe leather.

Makes great jerky. But who’s ever had a beef jerky sando? That seems like a bear best not poked.

Sirloin is a beautiful cut. It’s one of my favorite steaks because it’s flavorful, lean, and great texture.

But maybe too lean for what we’re making. But now I really want to go make some picanha.

My money is on ribeye because it packs tons of flavor and is well marbled. Tender as all get out, you don’t want to be chewing for days.

It’ll give your Pizza Cheesesteak the extra kick in the tookus it needs.

We’re spreading this beef out, this Pizza Cheesesteak feed 6 adults (or one Ron Swanson). The price per serving is quite affordable even with a high-quality meat.

The handshake of this dish, what brings it together, is the bread. A cheesesteak has a bun, while a pizza has a crust.

However, using a plain bun or a pizza crust wouldn’t perform the voodoo magic we need to bring this sando together.

Spreading some cheese and garlic powder on a slice of white bread does not make garlic bread (but it does make a clutch struggle meal).

The hero of garlic bread is the garlic, roasted garlic.

Packed tight and roasted until the garlic is tender, flavorful, and spreads like butter. There’s truly nothing like it.

Wildly impressive and astonishingly easy to make. And it’s perfect for our Pizza Cheesesteak!

Now that’s not to say that we’re going to ignore our “boosters”. Plenty of parmesan cheese, butter, oregano, and flakey salt.

Don’t skimp on the good stuff because this garlic bread could be eaten on it’s own. 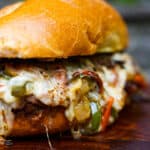 This Pizza Cheesesteak everything we love about a meaty, cheesy cheesesteak sandwich. This time with a pizza flare!

Jeremy is a small business owner by day; a private chef to a wife and two kiddos by night and creator behind The Kitchen Whitelaw. Specializing in new American cooking, diner fare, country club cuisine, the classics you know and love. Exploring new recipes, creating new dishes, and teaching new techniques.