Everyone loves a good smoked brisket, so it’s no surprise that’s what my sister requested for her birthday dinner! I slow cooked this guy for 14 hours and it was insanely delicious!! There’s not much I would get up at 4am for, but this Mesquite Peppercorn Lager Smoked Brisket was definitely worth it. If you are ready to give this a try, then get those coals started!

It’s a Marathon, Not a Sprint

To be frank, cooking smoked brisket like this takes time. This one took a solid 14 hours to cook;  HOWEVER, don’t let that scare you away! The process is really easy to follow, and the slow cook makes this chunk of meat super juicy and delectable. A good rule of thumb is it will take about 1 hour 15 minutes of cooking for every 1lb of brisket. So make sure to plan accordingly.

I prepped our brisket the night before by trimming the fat and seasoning the brisket with my Mesquite Peppercorn Lager Rub. This mixture of peppercorn and mesquite smoke made a perfect rub for our brisket. After we coated all sides of the brisket I placed it in the fridge to rest for the night. 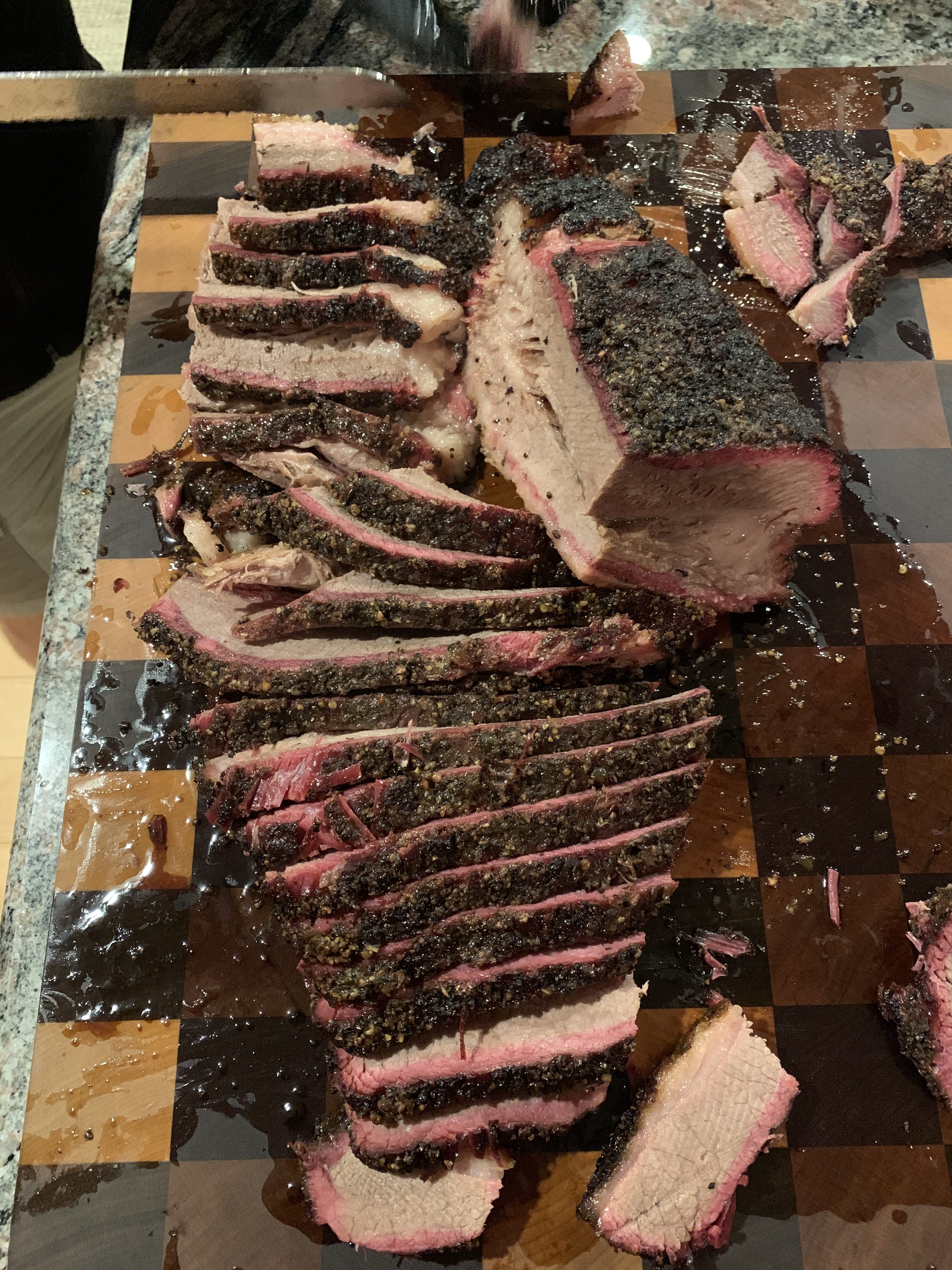 Everyone Loves Waking Up to the Smell of Bacon

While we woke up to the smell of a smoking brisket, the statement still applies. Start your day by preheating your smoker to 250 degrees Fahrenheit. Once your grill has reached temperature, place the brisket directly on the grill grate. You will leave it here to cook until it reaches an internal temperature of 165 degrees Fahrenheit.

Now, some will say that you need to place it fat side up. To be honest, this theory has been debunked multiple times so it really does not matter as long as you keep the heat and temperature consistent. I placed mine fat side down at first with the point facing the smoking box to protect the flat.

Once I had the brisket on the smoker, I went inside to make a spritzer. For this smoked brisket, I used a spritz comprised of lager, white wine vinegar and hot sauce. I mixed it all in a spray bottle and would lightly spray the brisket throughout the day while it was cooking. How often you spray the brisket is a personal preference. It is more important to keep the brisket moist, but just know that over-spritzing will cause the cook to take longer. Try to do it once an hour if you like! 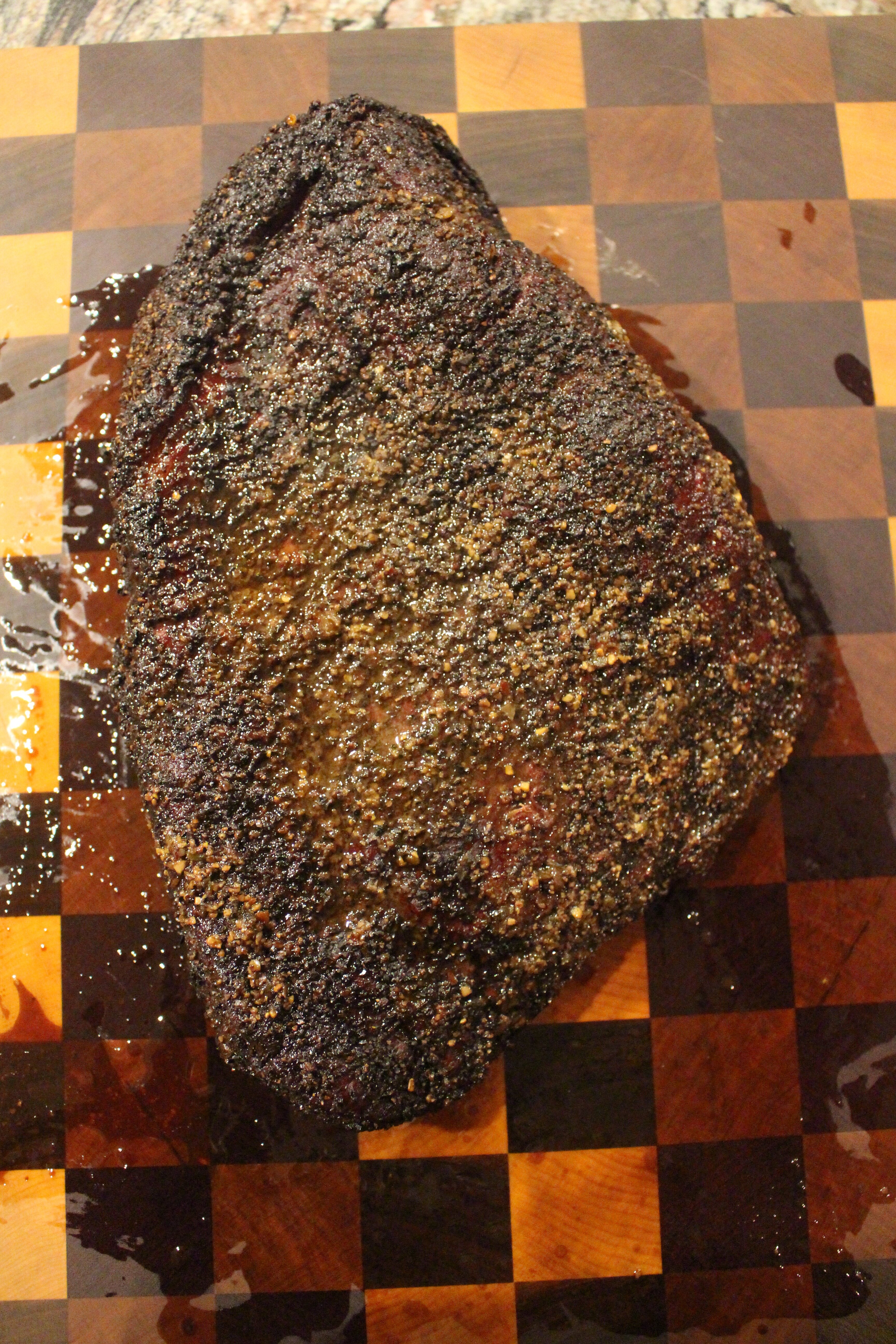 The brisket stall happens just after the brisket reaches 145F until it reaches 175F. This is when the fat melting actually cools the brisket while it cooks and causes the meat to cook very very slow. There are a couple of options to getting this to speed up:

I chose to use the butcher paper method for this cook, but feel free to try any of the others! To do the butcher paper method, grab some peach butcher paper and lay out two long strips. You will want to wrap it around the brisket about three times, so make sure it’s long enough! Overlap the two long sides of the paper to increase the width of the paper’s surface area. Grab your brisket from the smoker and place it on the far end of the paper. Wrap the ends of the paper up and around the bottom on the brisket. Then flip the brisket, along with the paper, over and over again until it’s completely wrapped. Place the brisket back on the smoker and let it continue to cook at 250F until it reaches an internal temperature of 202-203F.

Once the brisket reaches temperature, pull it off to rest for 1 hour. We like to place it in on the counter or in an empty oven to rest as this will prevent the brisket from cooling too quickly. Wrap the brisket in a towel and place inside an empty cooler if you plan on serving it a couple hours later.

Now, let’s slice into this Mesquite Peppercorn Lager Smoked Brisket and get the party started! As always when slicing, make sure it’s against the grain. You’d hate to go to all this work only to lose it’s tenderness while crossing the finish line. Slice the smoked brisket between the point and the flat for starters. You can slice the flat by going horizontally, but you will need to rotate the point 90 degrees before cutting. Once it is all smoked brisket sliced up, serve and enjoy! Make sure to tune in for some leftover brisket recipes too! 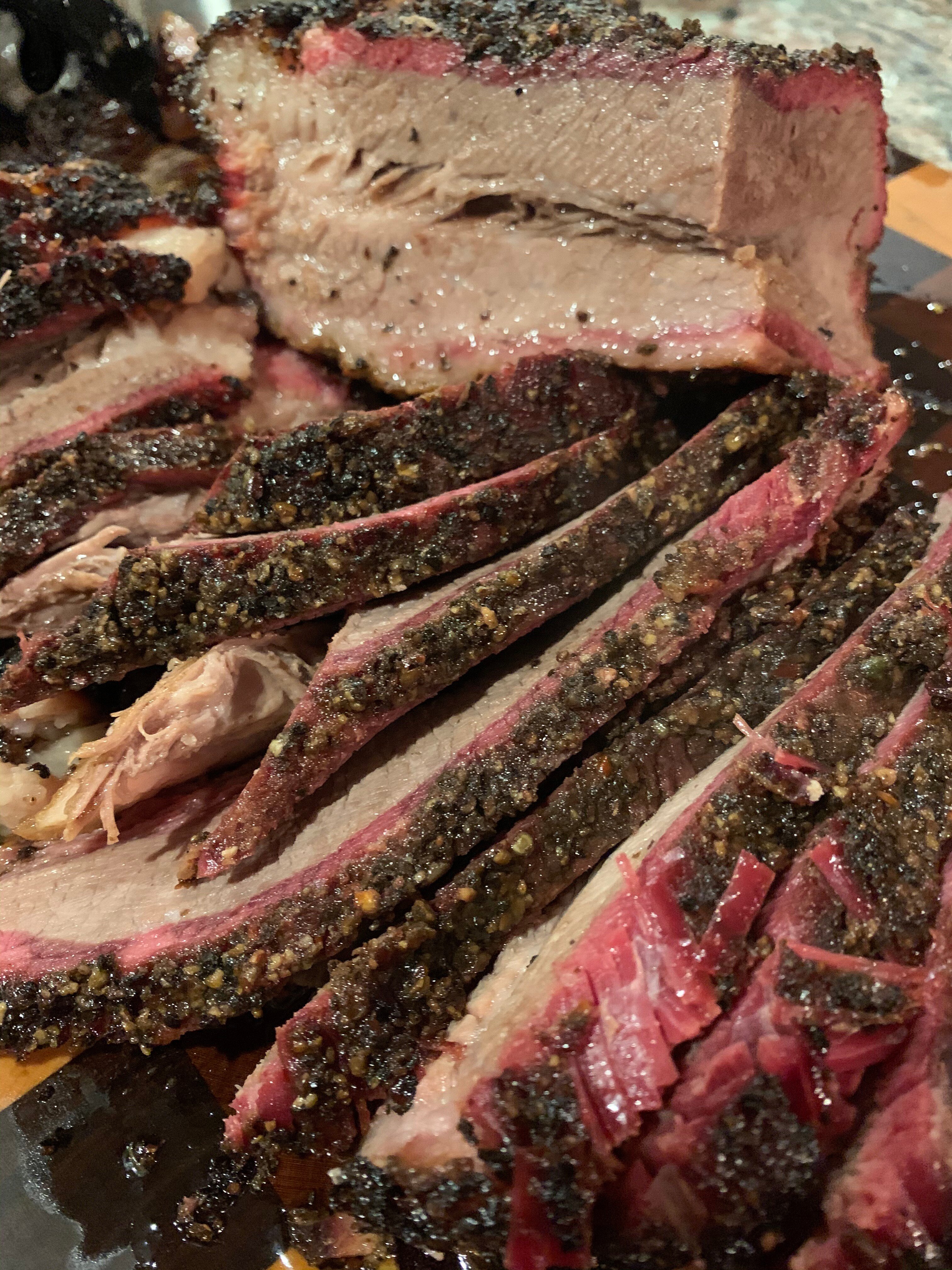 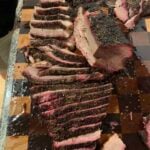