Beer Battered Fish on a Stick 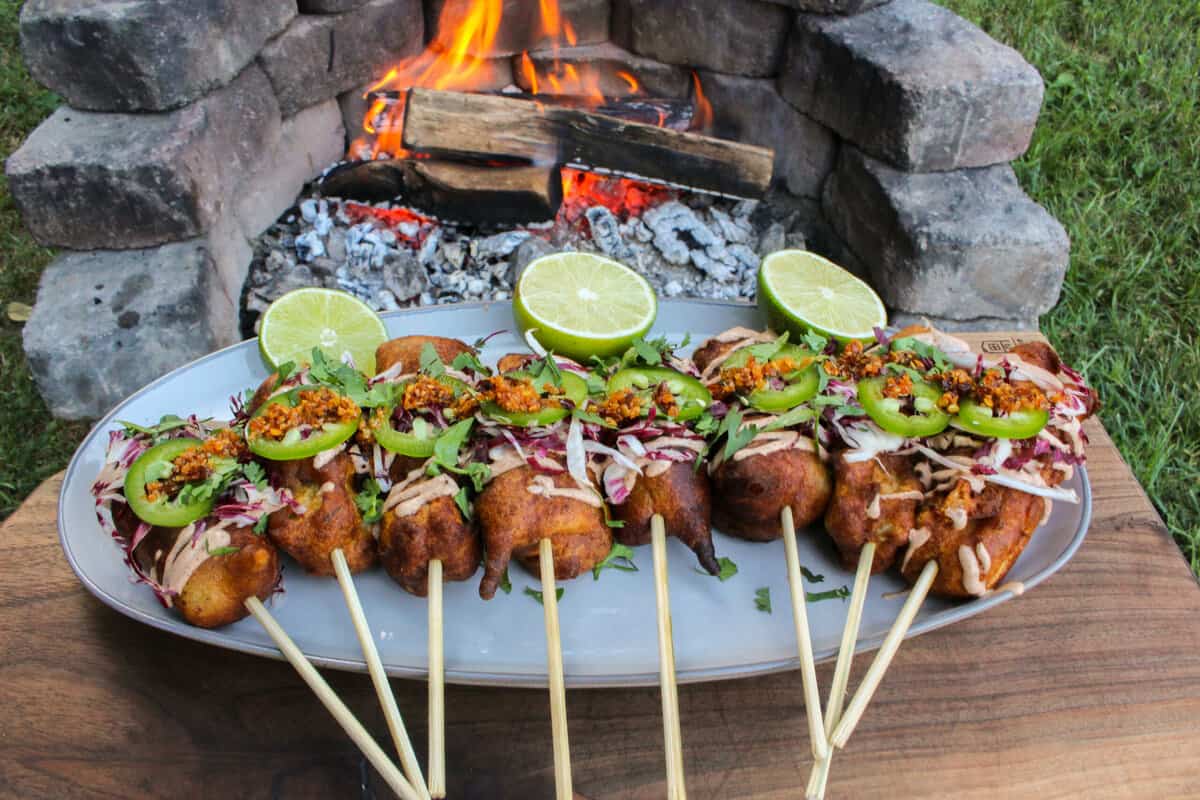 Beer Battered Fish on a Stick for a fun recipe to spice up your mealtime. When a good friend offers to share some freshly caught fish with you, you don’t turn down that offer. A Tennessee lager and some of my very own Chipotle Garlic seasoning were the two MVP ingredients to the batter for this fried fish. Finish it off with a bit of homemade chipotle sauce, jalapeños and chile crunch for the most delicious fish sticks.

Fun fact, this recipe actually started out as a fish tacos recipe. It wasn’t until after the frying process that my wife said, “Hey, those look like corn dogs!” that this recipe was born. I agreeingly laughed with her and we decided to pivot this recipe to Beer Battered Fish on a Stick. It reminded me of going to a carnival, where all foods are dubbed to be better on a stick. Well, I’m not sure that’s true, but I will say these turned out amazingly and are a pretty fun spin on regular fish sticks.

To get things started for these Beer Battered Fish on a Stick, we’ll prep the fish. I took each fish filet and sliced them into long strips. Then, I placed all the fish in a large bag and poured flour in along with it. Shake the bag until every fish strip is coated in flour. Coating the fish in a base layer of flour helps not only to dry the outside of the fish, but also helps in allowing the batter to stick to the fish for frying. Now, set this to the side and we’ll begin prep on the beer batter. 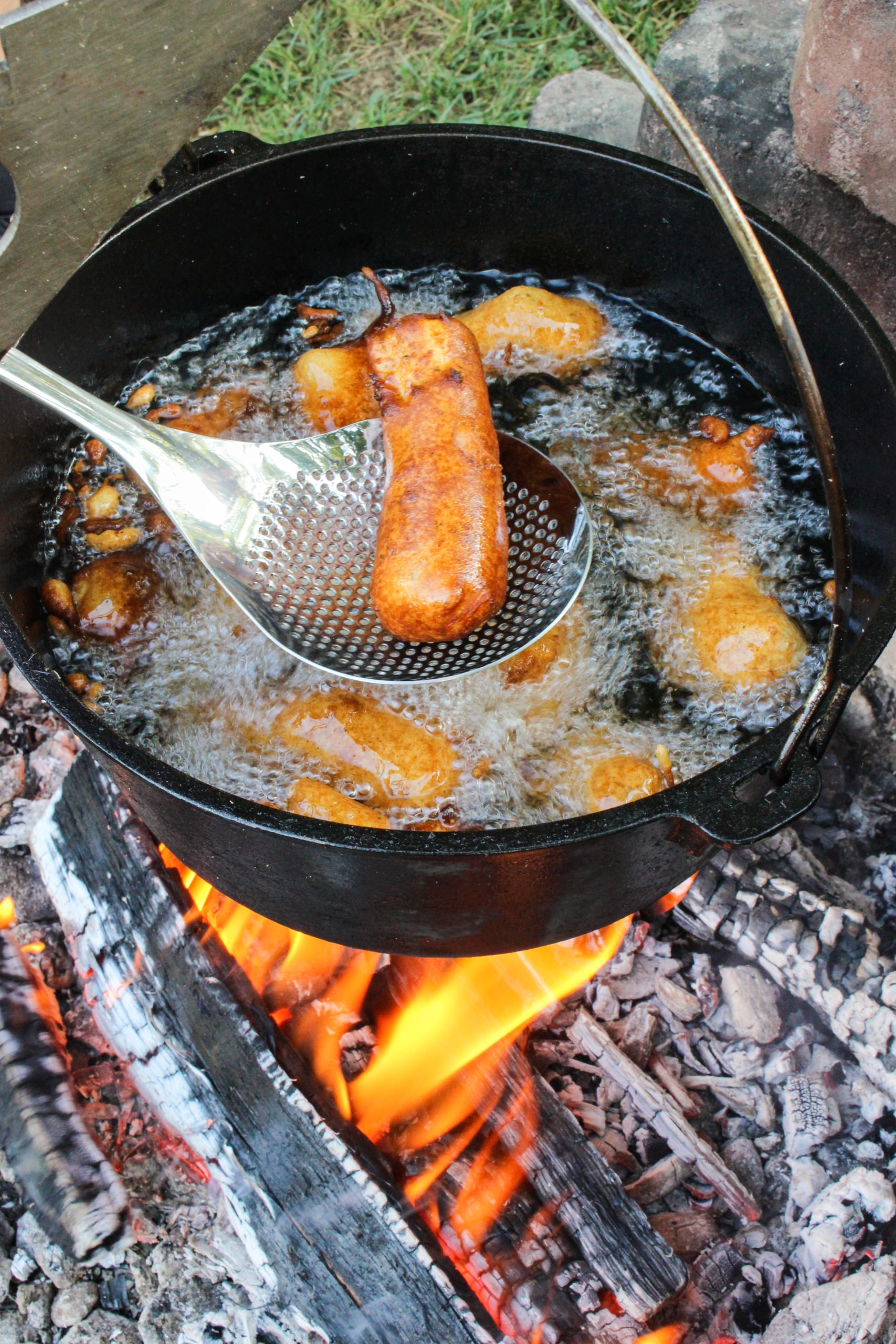 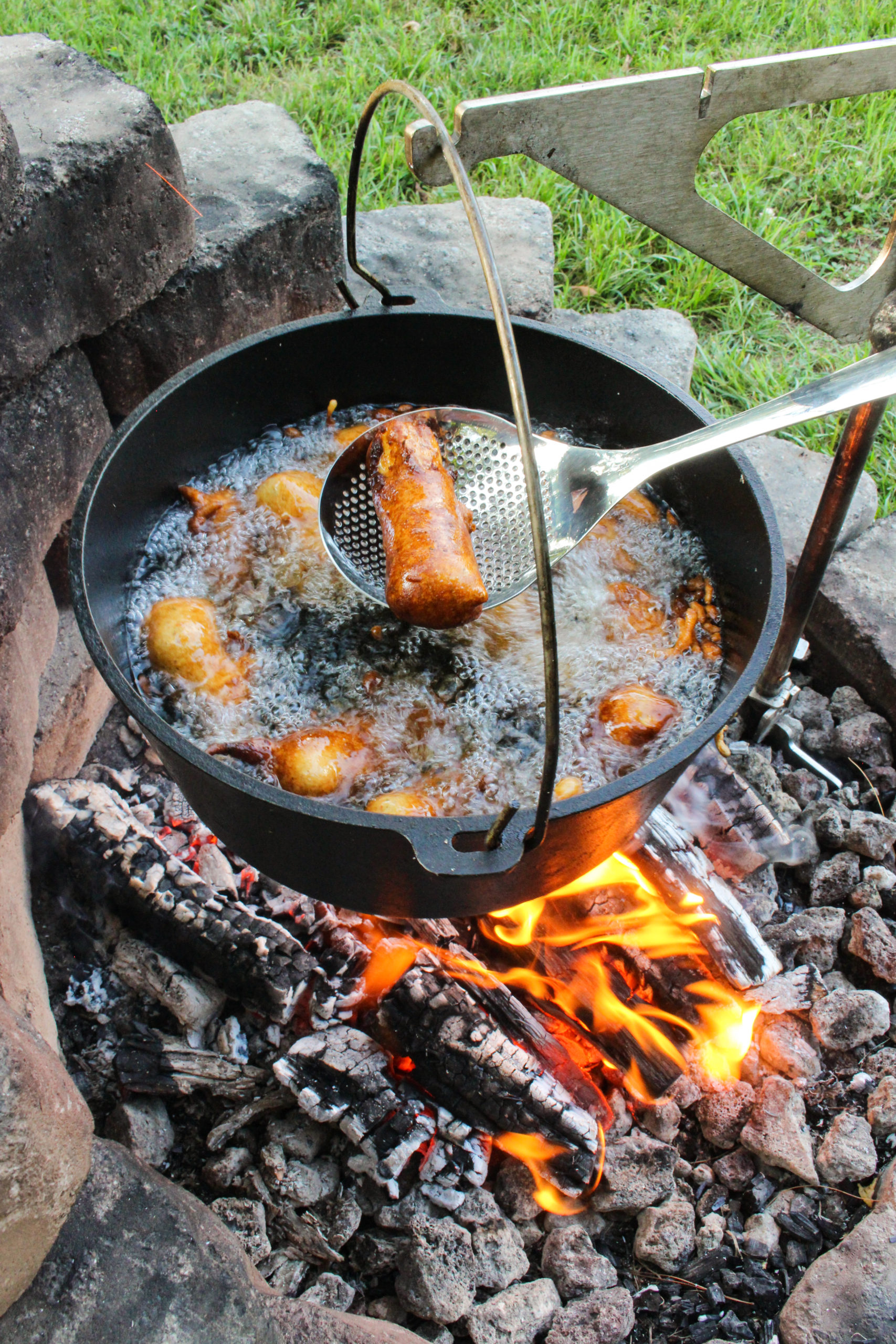 Beer Batter for Better Fish on a Stick

Frying Fish and Placing Them on a Stick

Take your bag of fish and the batter out to the fire. I used my Breeo Outpost to hang a cast iron pot over the flames. Let the frying oil heat up and then we’re ready to start cooking. Individually, take a cut of fish and dunk it in the beer batter. Cover all sides and edges of the fish and then drop it in the oil to fry. Pull the fish from the oil as the batter turns golden brown in color on the outside. Set them aside to cool for a few minutes. 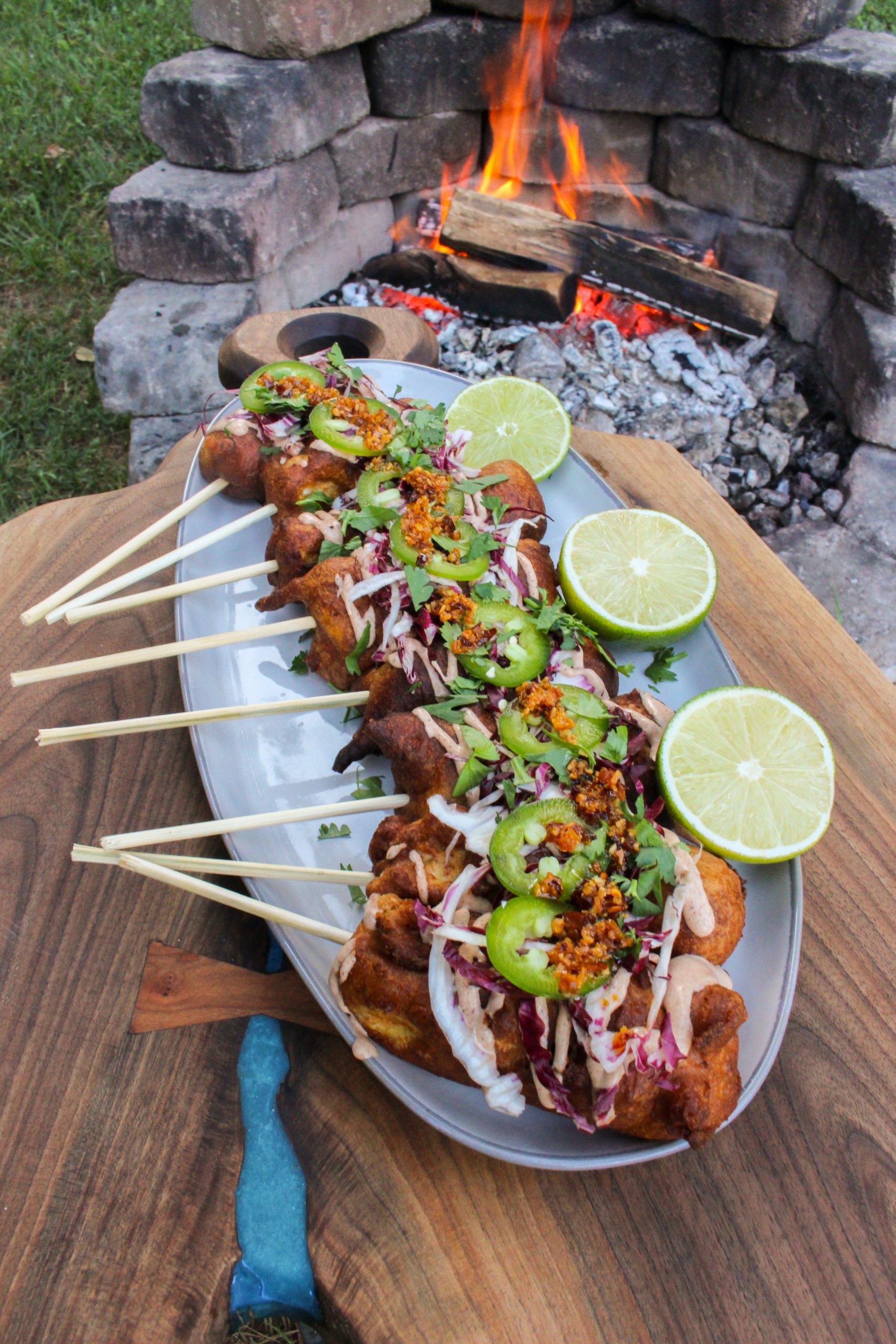 While the fish were cooling, I whipped together a chipotle cream sauce. Simply mix all the ingredients together in a large bowl and then transfer it to a squeeze bottle. This sauce ended up being one of my favorite parts of this recipe. It really helped drive the chipotle flavor home while the sour cream and honey balanced out the spice with a cool sweetness.

Step Right Up – Get Your Fish on a Stick

Our last couple of steps include placing each beer battered fish on an actual stick. I skewered each fish about three fourths of the way through lengthwise. Then, I laid them all down on a serving dish and drizzled them with the chipotle cream sauce. Lastly was the garnish. I used sliced cabbage, jalapeños, cilantro and chile crunch. They tasted just as good as they looked! Best enjoyed with friends and family. Cheers! 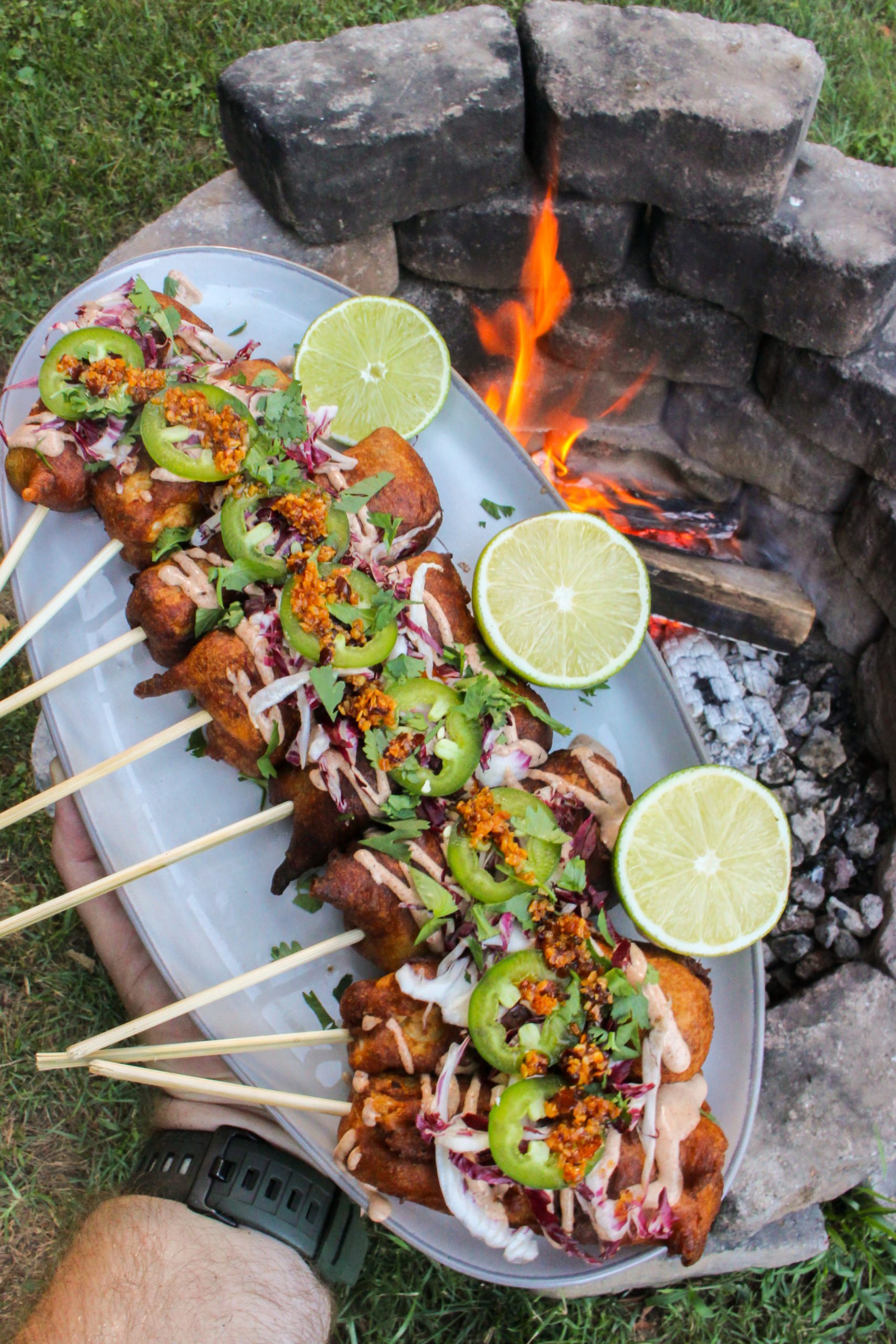 A Tennessee lager and some Chipotle Garlic seasoning were the two MVP ingredients for this Beer Battered Fish on a Stick recipe!