I love Seared Tuna Tataki and am actually surprised I haven’t done this recipe yet. Inspired by some Japanese cuisine that I have been eating lately, I wanted to make this dish over the fire. Seared the tuna over hot fire then splashed with a citrus and soy sauce blend for the perfect dinner!

Tataki is when something is quickly seared on a hot surface to caramelize the outside but leave the inside raw.

For the seared tuna:

For the dipping sauce:

We start this Seared Tuna Tataki recipe with three shashimi grade tuna filets. Set them on a plate and then gather all the ingredients for the tuna seasoning. Mix those ingredients together in a bowl and then lather the three filets with it. For this seasoning I used black and white sesame seeds, dried minced garlic, dried minced onion, poppy seeds and coarse salt. I love this mix up because it brings some color and texture to the tuna. The poppy and sesame seeds have a great, almost nutty flavor that pairs perfectly with the citrus/soy sauce mix that we use to finish the dish.

Speaking of sauce, let’s get to work on it. Since the Seared Tuna Tataki will cook so quickly, it’s nice to already have the sauce prepared. The sauce itself is pretty simple to make. The most difficult part is probably grating the ginger. Pro tip: start by peeling your ginger with a spoon. Using a spoon makes it so easy to peel ginger and doesn’t leave you cutting away more ginger than needed (like you would with a small knife). I peeled the ginger and grated it really fast. Then I tossed it into the bowl along with the other sauce ingredients. Whisk everything together, and set in the fridge until your tuna is ready for it.

Before placing the tuna on the grill, it’s important to ensure that the grill and the skillet are properly heated. The tataki style of cooking uses a really hot grill to sear the outside of the protein. The inside of the meat stays rare or raw. Basically, it’s a flash sear, which you won’t be able to achieve if the grill, skillet, plancha, or whatever you’re using to cook isn’t very hot. I used my plancha for this Seared Tuna Tataki and also poured a bit of oil down to ensure the tuna didn’t stick.

Have your spatula close by as you set the tuna on the grill for their initial sear. As you see the first millimeter or so of meat become cooked, flip the tuna and watch for the same to happen on the other side. Once that happens you can quickly sear the edges of the tuna and then remove it from the grill. Just like that, your Seared Tuna Tataki is ready for slicing.

Create long, bitesize strips as you thinly slice into the Seared Tuna Tataki. Then, transfer over to a serving dish. Now, the garnish. This is where the recipe comes to life. I started by using a spoon to spread our homemade sauce all across each sliced filet. I kept adding the sauce until there was a very shallow lining of it across the bottom of the dish. Then, I sprinkled on chopped scallions for a bit of crunch and some Korean chili flakes for a slight kick of heat. Here comes the best part, time to dig in! Best enjoyed with friends and family. Cheers! 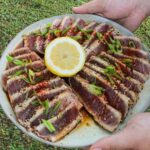 Seared Tuna Tataki swimming it’s way onto our feed today! Finished with a citrus and soy sauce blend for the perfect dinner!