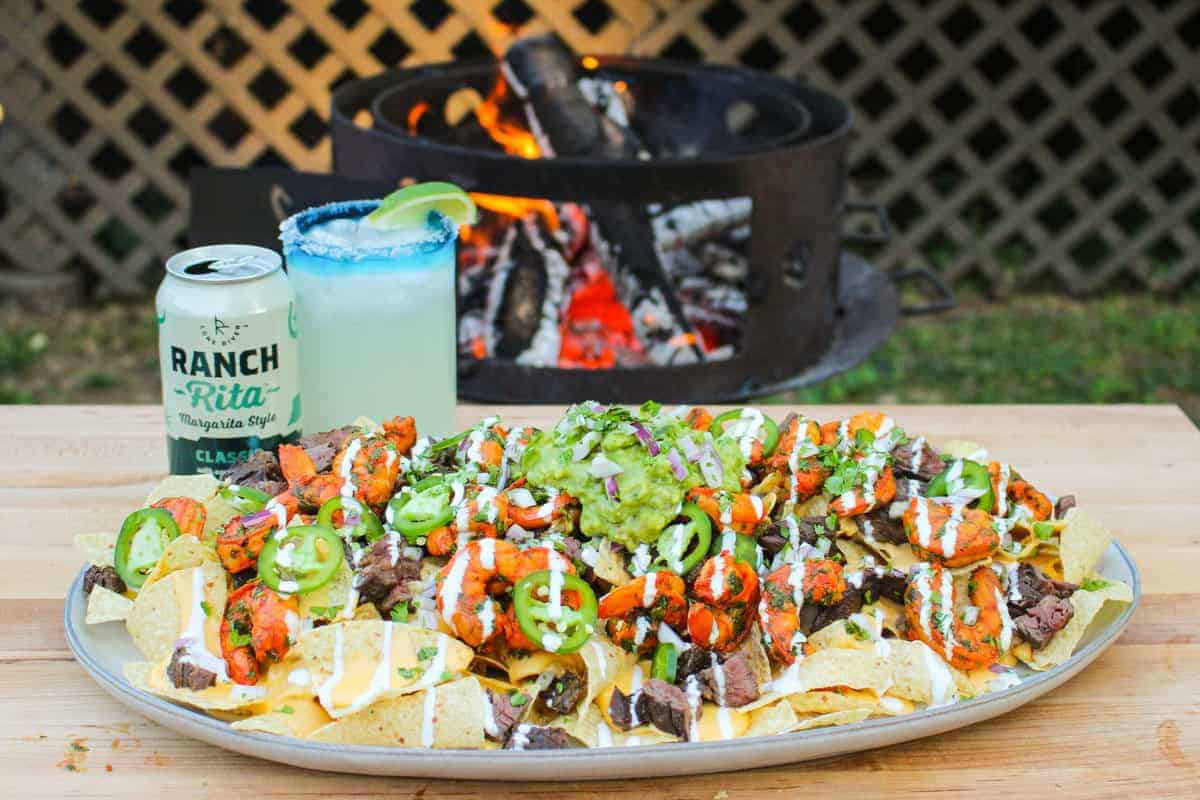 These Surf and Turf Nachos are the best loaded nachos. Salty tortilla chips are drizzled with nacho cheese and layered with sautéed shrimp, juicy bites of steak, and more.

These delicious nachos are served, of course, with salty, sweet and tangy, Lone River Ranch Rita!

Looking for more surf and turf favorites? Check out my Surf and Turf Fajitas, Surf and Turf Butter Burger, or my Garlic Butter Steak and Shrimp!

Ideally, this Surf and Turf Nachos recipe starts the day before you’re going to serve it because you need to set aside a little bit of time to marinate the beef. Now, if you’re shorter on time, you can let it marinate for just 4 hours. However, you’ll get the best flavor and texture with an overnight marinade. If you’re able to plan ahead, do that!

So, in a food-safe bowl, combine soy sauce, cola, chipotle paste, chopped cilantro, lime juice, orange juice, oil, and salt. Mix it all up so it’s well combined, then add in the skirt or flap steak pieces. Set the bowl into the fridge and allow the steak to marinate. Again, ideally overnight, but at least for 4 hours. 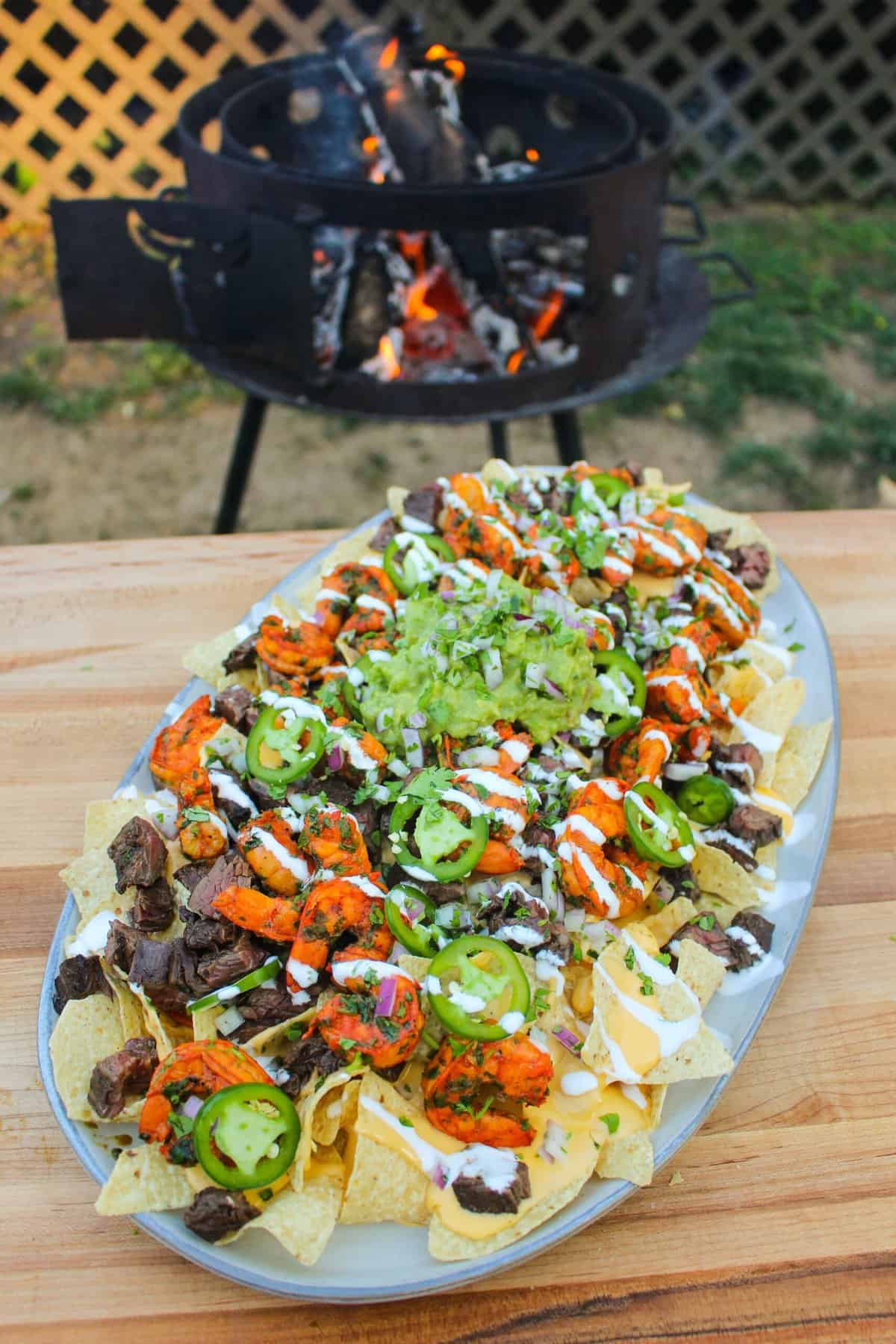 Next, we need to marinate the shrimp for our Surf and Turf Nachos. Shrimp takes much less time to marinate, so you can start prepping the shrimp just 30 minutes or so before you’re ready to grill.

If you love shrimp as much as I do, you’ll love my Shrimp “Al Pastor Tacos, Garlic Shrimp Scampi, or Bacon-Wrapped Shrimp Skewers.

In another food-safe bowl, combine achiote paste, chopped cilantro, lime juice, orange juice, oil, and salt. Add in the peeled, deveined, and de-tailed shrimp and let it sit for 15 minutes.

Drain the marinade and set the shrimp aside while you get ready to cook.

Start by preheating your grill to a temperature of around 400ºF. The high temperature is key to giving the steak that perfect sear and the shrimp that delicious crispy exterior. We want all that delicious texture in our Surf and Turf Nachos!

First, add the steaks onto the grill and cook them for about 4 minutes per side. I like to cook them to a medium-rare temperature of about 120ºF. Pull it off and let it rest while you cook the shrimp. 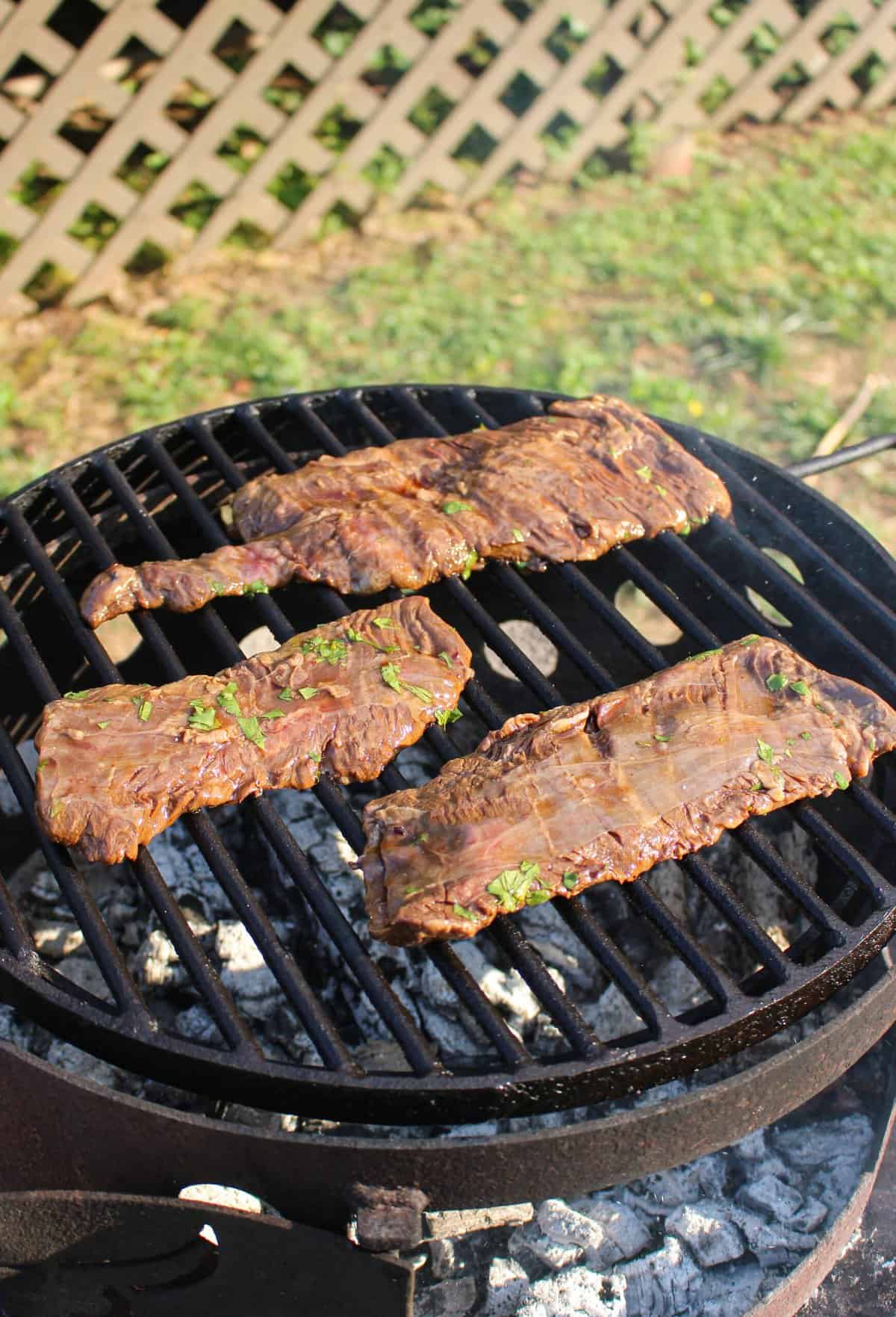 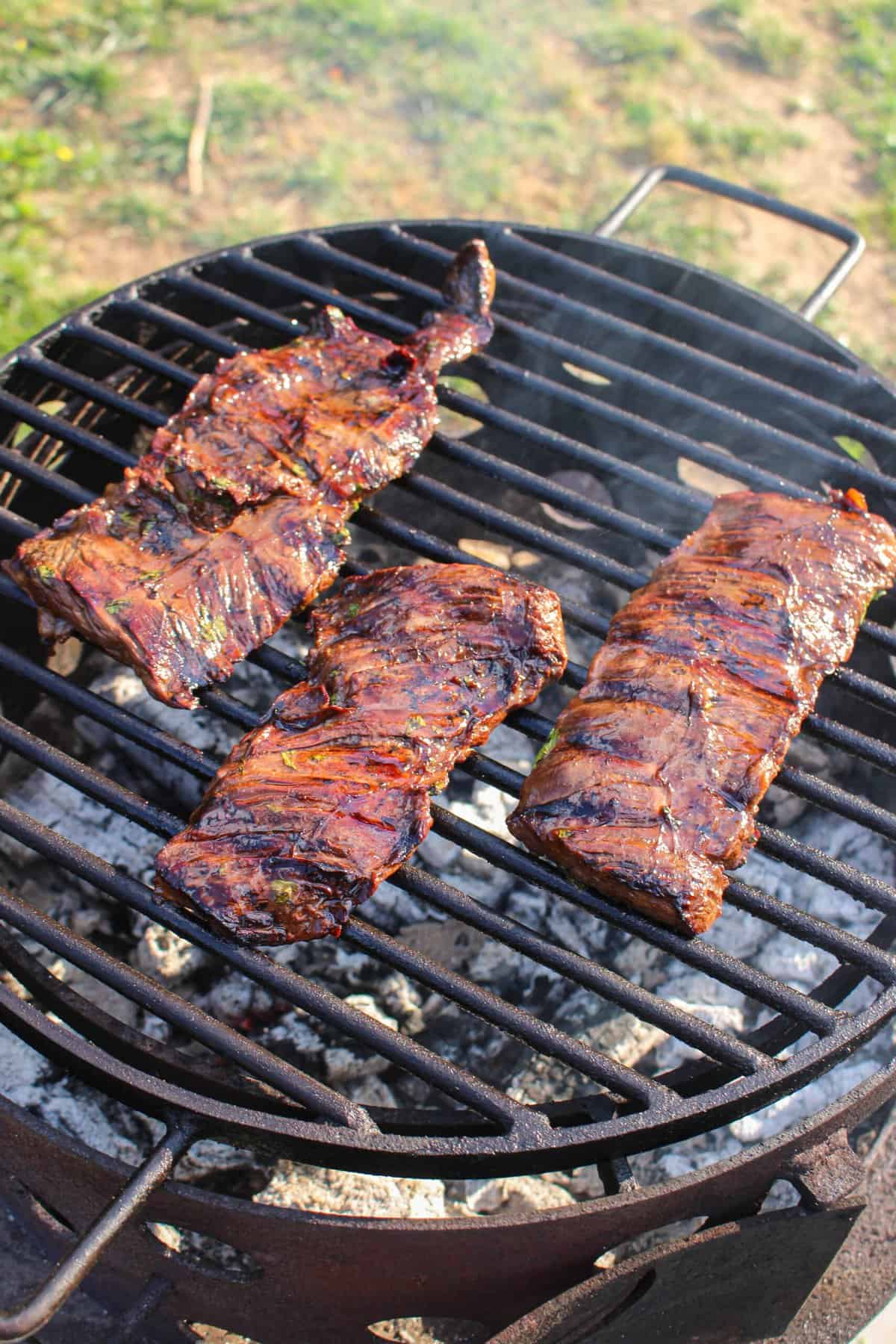 Next, set a cast-iron skillet or plancha over the fire. Drizzle some oil into the pan, then add the shrimp into the skillet. Cook for 2-3 minutes or until opaque and “C” shaped. 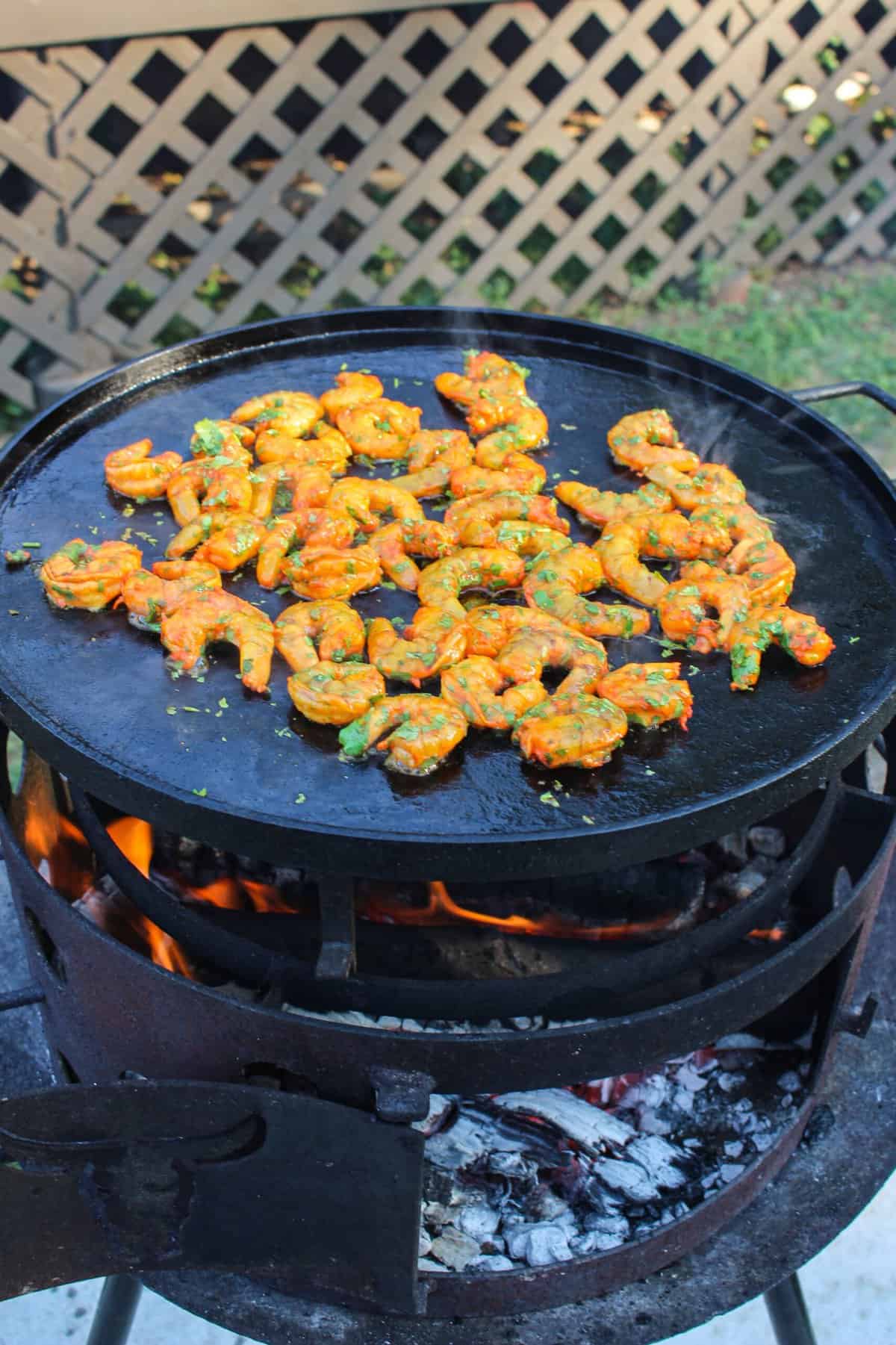 Pull the skillet off of the heat and set aside.

Surf and Turf Nachos just aren’t quite as good without a delicious margarita on the side. Instead of getting out the cocktail shaker, what’s more convenient than a canned margarita style beverage while you’re grilling? And we have Lone River to thank for this delicious pairing!

To dress up your Ranch Rita, simply squeeze lime juice onto one plate, and a mixture of salt and sugar on another plate. Dip the top of your serving glass into the lime juice followed by the sugar/salt to coat the rim.

Assemble Your Surf and Turf Nachos

First thing’s first, slice the steak! Now, make sure you do this “against the grain”, meaning through the long muscle fibers. The goal is to shorten those fibers so the steak is more tender and easier to chew. Next, slice the strips into bite-sized pieces.

Now, assemble your nachos! Start with a layer of chips. Drizzle that with nacho cheese, then layer on more chips and cheese. Top the Surf and Turf Nachos off with cubed steak, shrimp, chopped cilantro, red onions, sliced jalapeños, sour cream, and guacamole. 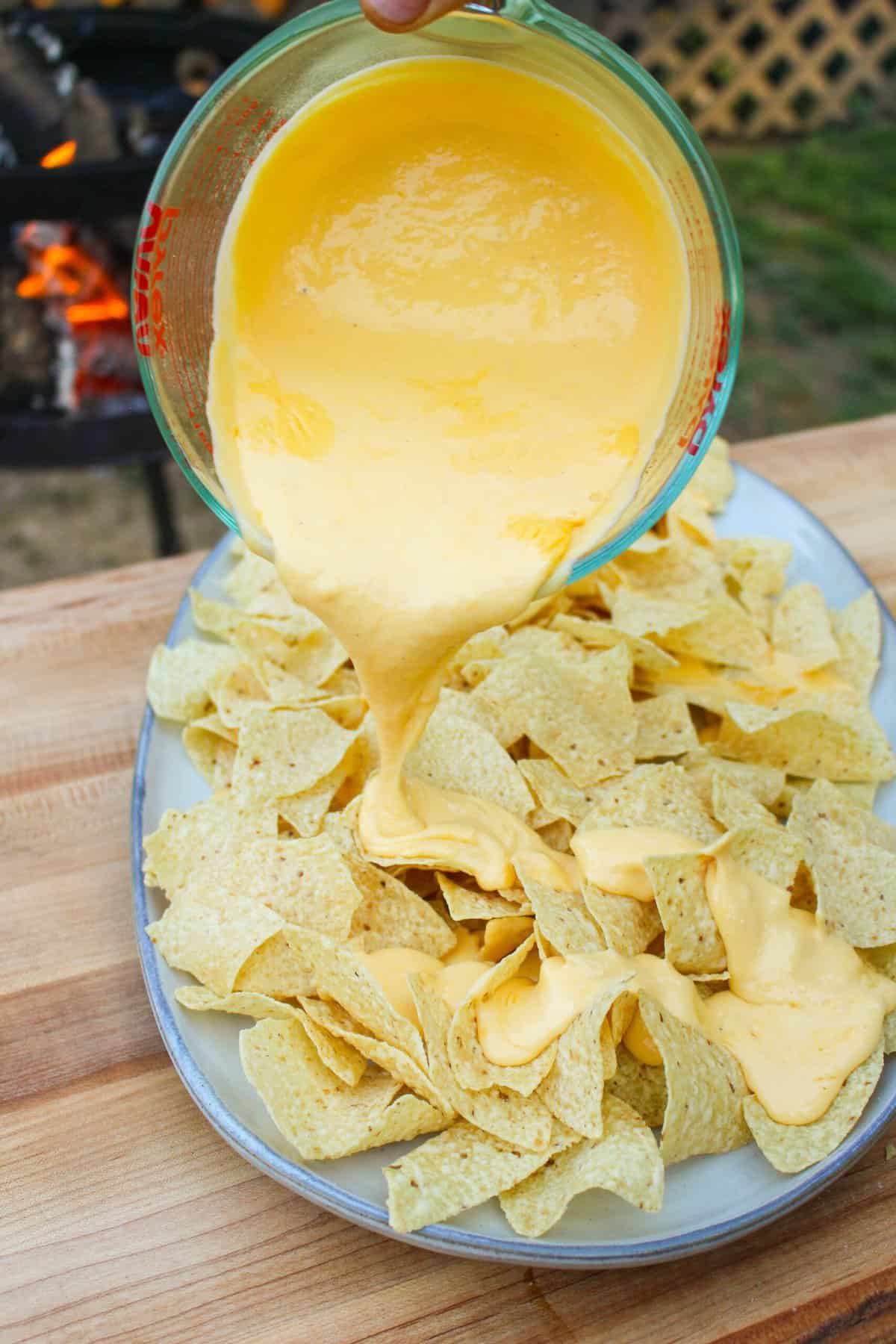 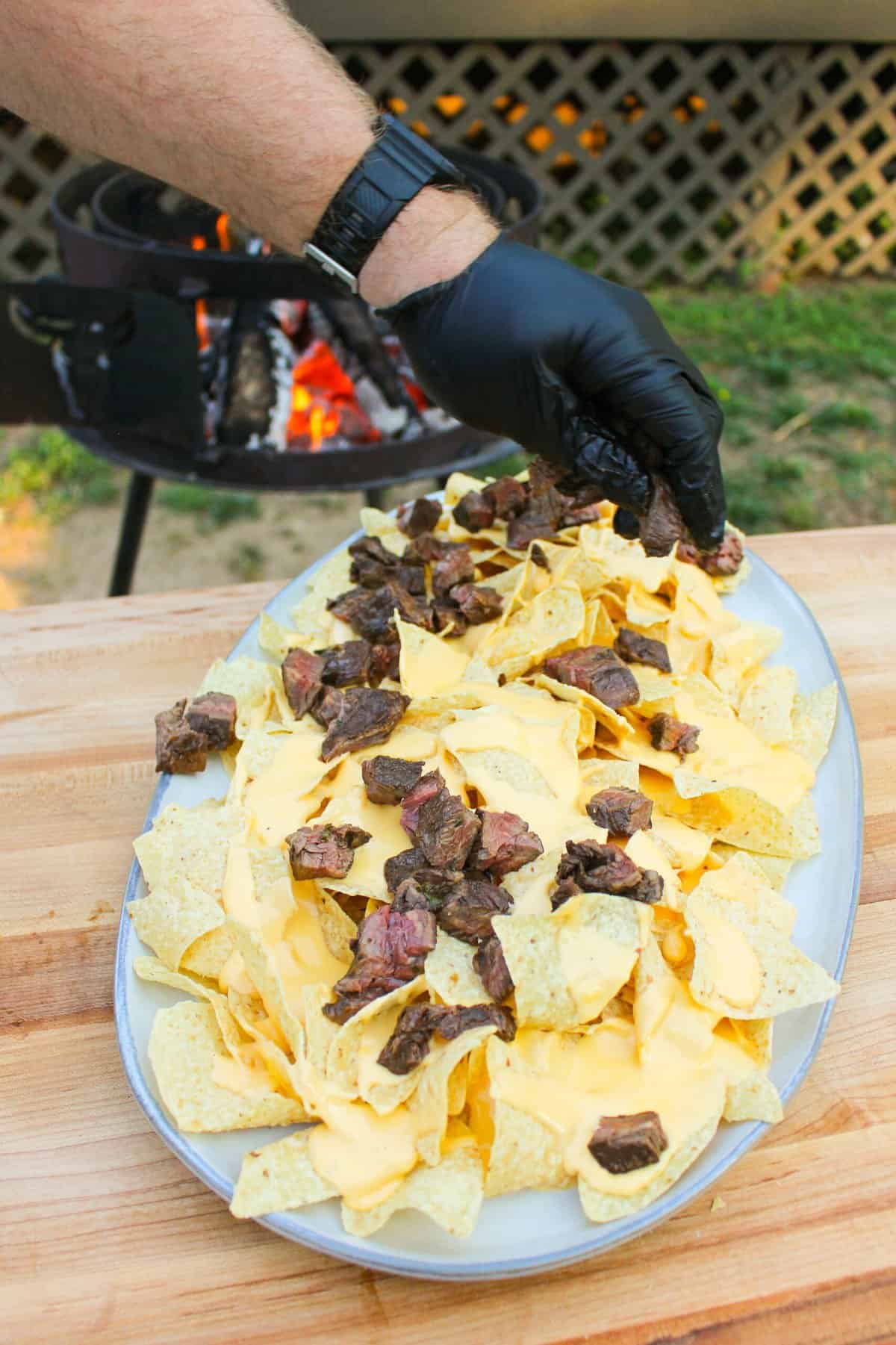 Wash your nachos down with a salty and sweet Lone River Ranch Rita and you’ve got the perfect meal! 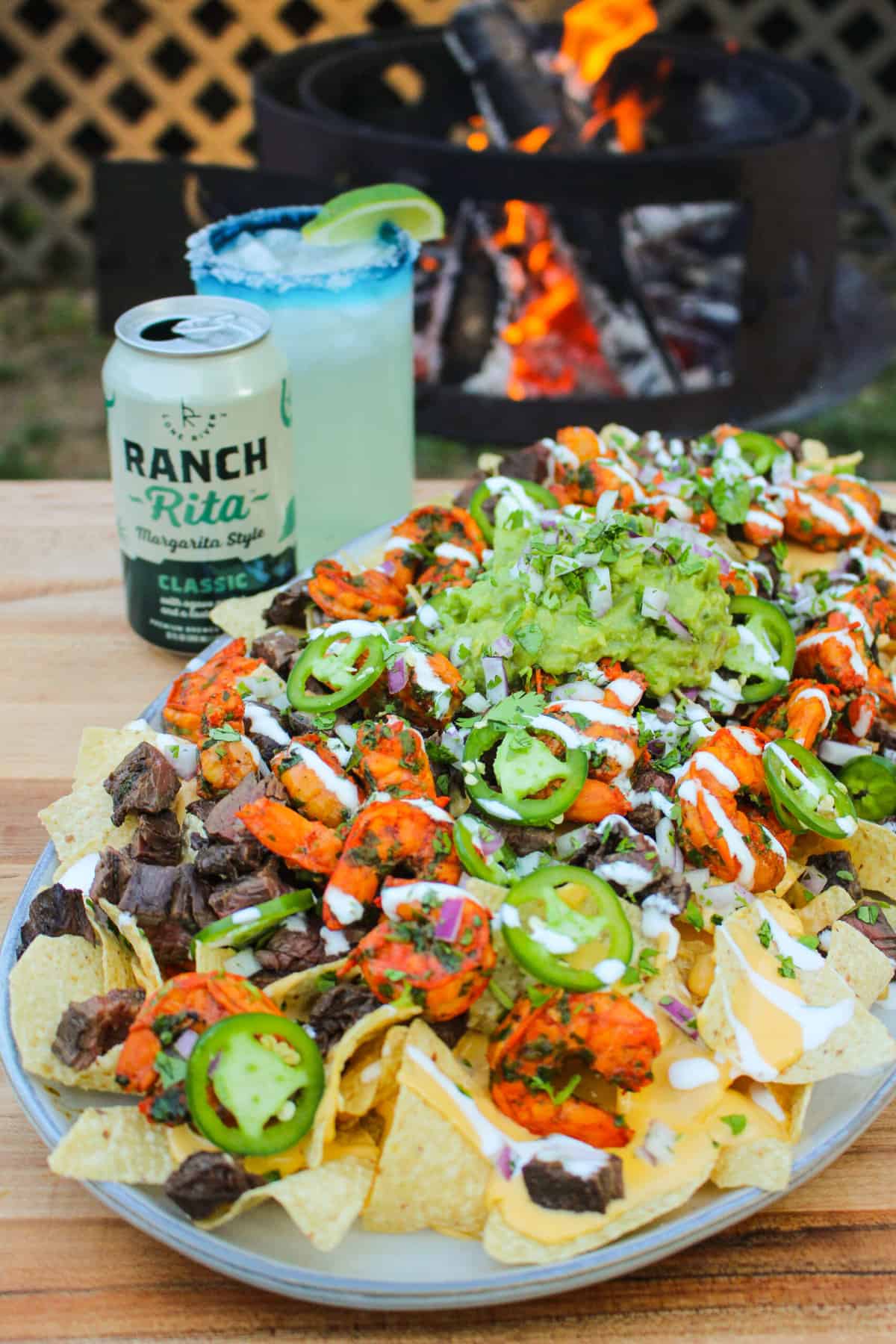 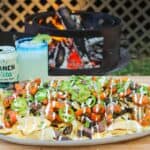 These Surf and Turf Nachos are tortilla chips drizzled with nacho cheese and layered with sautéed shrimp, juicy steak, and more.