Fire baked Stuffed Cajun Lobster Mac and Cheese going down today! I can promise you this recipe tasted even better than it looks, and (not to toot my own horn) I think it looks pretty freaking good. Who doesn’t love homemade mac and cheese?! That’s the foundation for this recipe. From there we add it to the shell of our cooked lobster and set it in the oven for one final bake before serving. All I have to say is… Let’s do this!

Return of the MAC… and Cheese

Let’s get started with the mac and cheese. I began by preheating my wood fire oven and then placing my dutch oven inside the wood fire oven to also preheat. Once the dutch oven is hot, carefully pull it from the oven and grab the butter. All good meals start with butter, okay maybe not all, but this Stuffed Cajun Lobster Mac and Cheese does. Place the butter inside the dutch oven and spread it around until it’s all melted. If you need to place it back in the oven to speed up the melting process you can.

After the butter melted, I added some of Spiceology’s Salt, Pepper and Garlic blend into the mix for additional flavoring. Then, slowly start adding the flour into the mixture. I recommend stirring throughout this process to avoid clumps. Give the mixture another stir after all the flour has been added and then place it back into the oven for a bit. 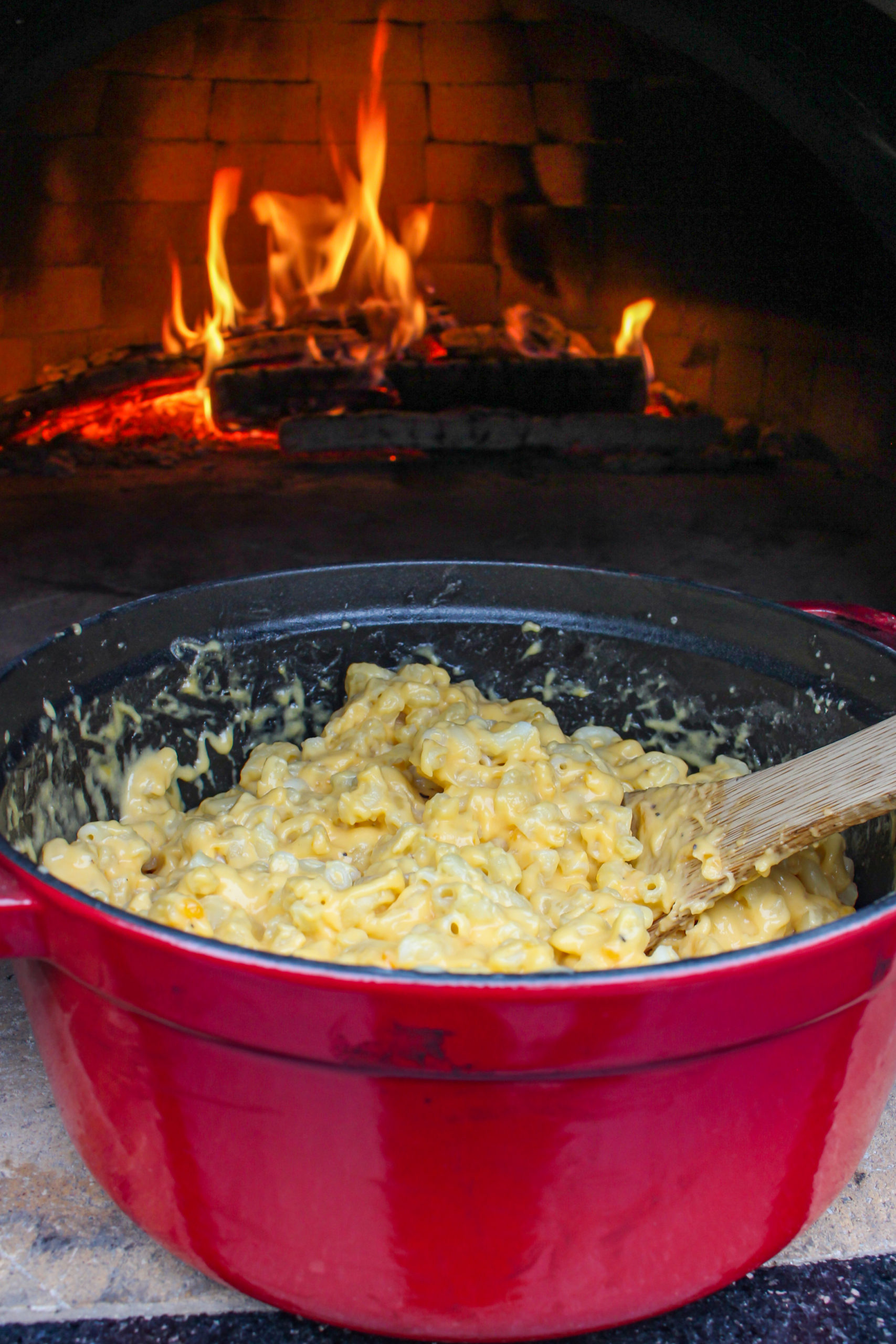 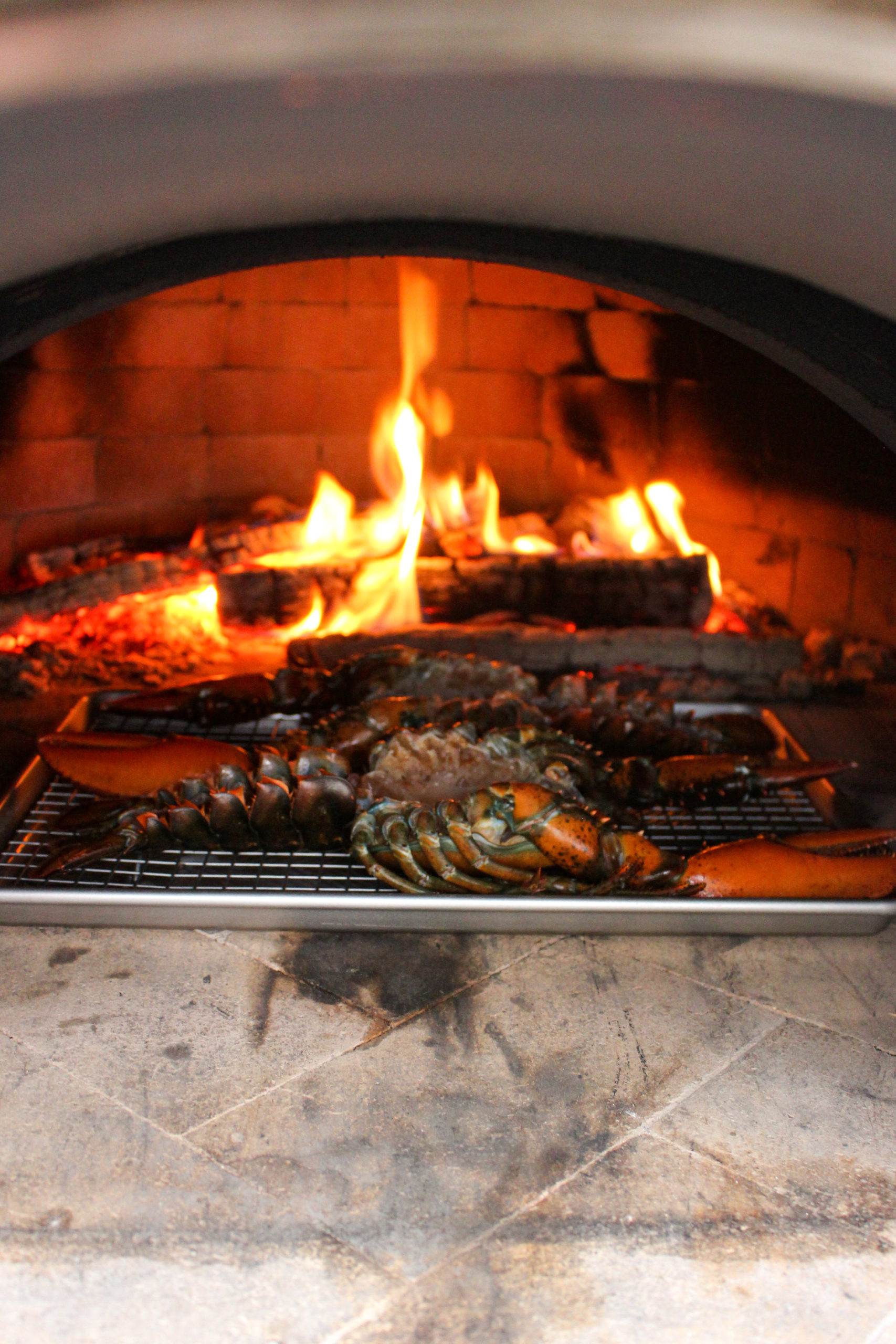 Up next for our Stuffed Cajun Lobster Mac and Cheese comes the tricky part, the milk. Pull the dutch oven back out of the stove and add about a cup of milk. Stir, stir, stir and stir. Then, back into the oven it goes! Remove it from the oven after a few minutes and give it another stir, this time checking more for the consistency of the mixture. We want something like a cream type of consistency, not thin like a liquid but also not super thick. You should be able to easily stir through it. You can add more milk to help thin the mixture or put it back in the oven for a bit if it needs to thicken. Once you’re happy with the consistency, add the cheese!

I used shredded cheddar cheese for this Stuffed Cajun Lobster Mac and Cheese recipe. Toss it into the dutch oven and stir, stir and stir some more. Add milk to the mixture throughout this stirring process until it reaches a smooth consistency. Once you’ve found that perfect cheese consistency, toss about half of your macaroni into the dutch oven. As it gets mixed in, add the remaining macaroni and stir it in. Now, we’re done with the mac and cheese. Let’s move on to the Cajun Lobster.

From here, everything for this Stuffed Cajun Lobster Mac and Cheese is relatively easy. Take your lobster, lather the meat with oil and then season with cajun blackening seasoning. Now, take them to the oven and let them bake. I rotated them throughout the cooking process to ensure they cook evenly. Once they’re done, pull them from the oven and get ready to add the mac and cheese.

Fill each cajun lobster cavity with a mac and cheese. I kept adding the mac and cheese until it was basically overflowing because it felt like a “go big or go home” kind of situation. Then, I topped the mac and cheese with a butter, garlic and panko crumb mixture to give it some texture. Now, back to the oven one last time. 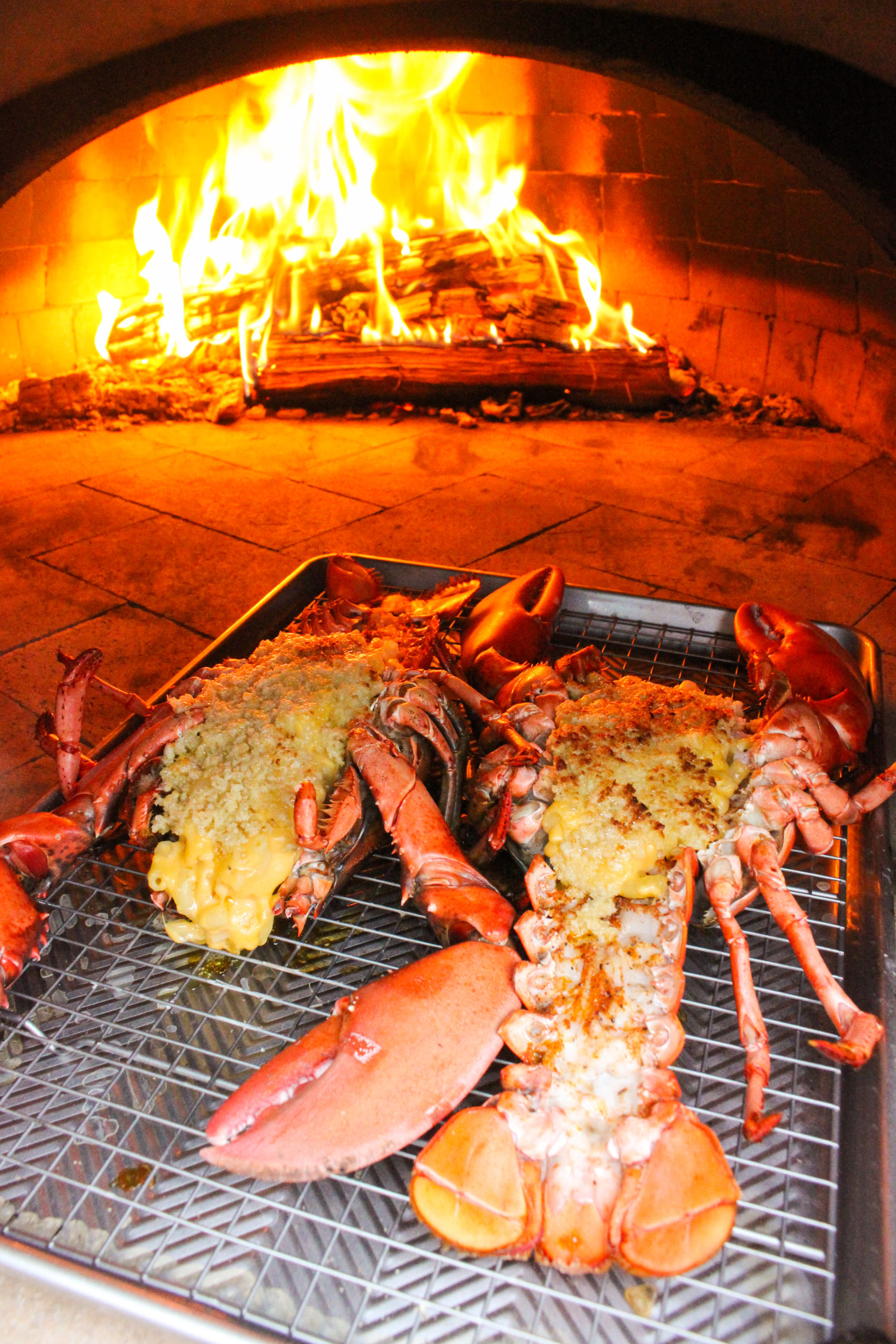 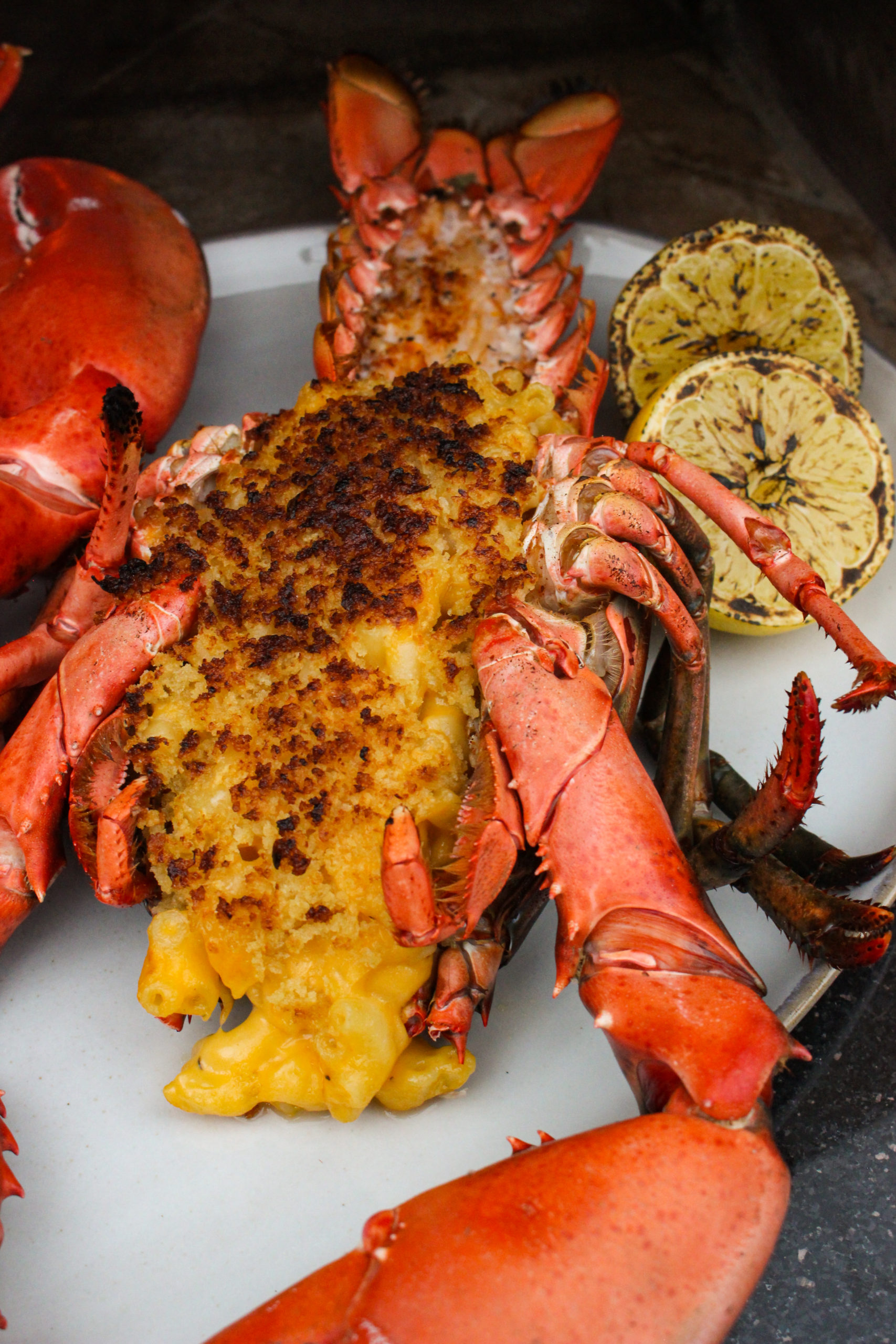 Place the Stuffed Cajun Lobster Mac and Cheese back into the wood fire oven, this time for only a minute or two. We are only trying to get some caramelization on top of the mac and cheese so it won’t take long. Then, pull from the grill and garnish with some chopped parsley and charred lemon halves. Wow, what a showstopper dinner this is!  Best enjoyed with friends and family. Cheers! 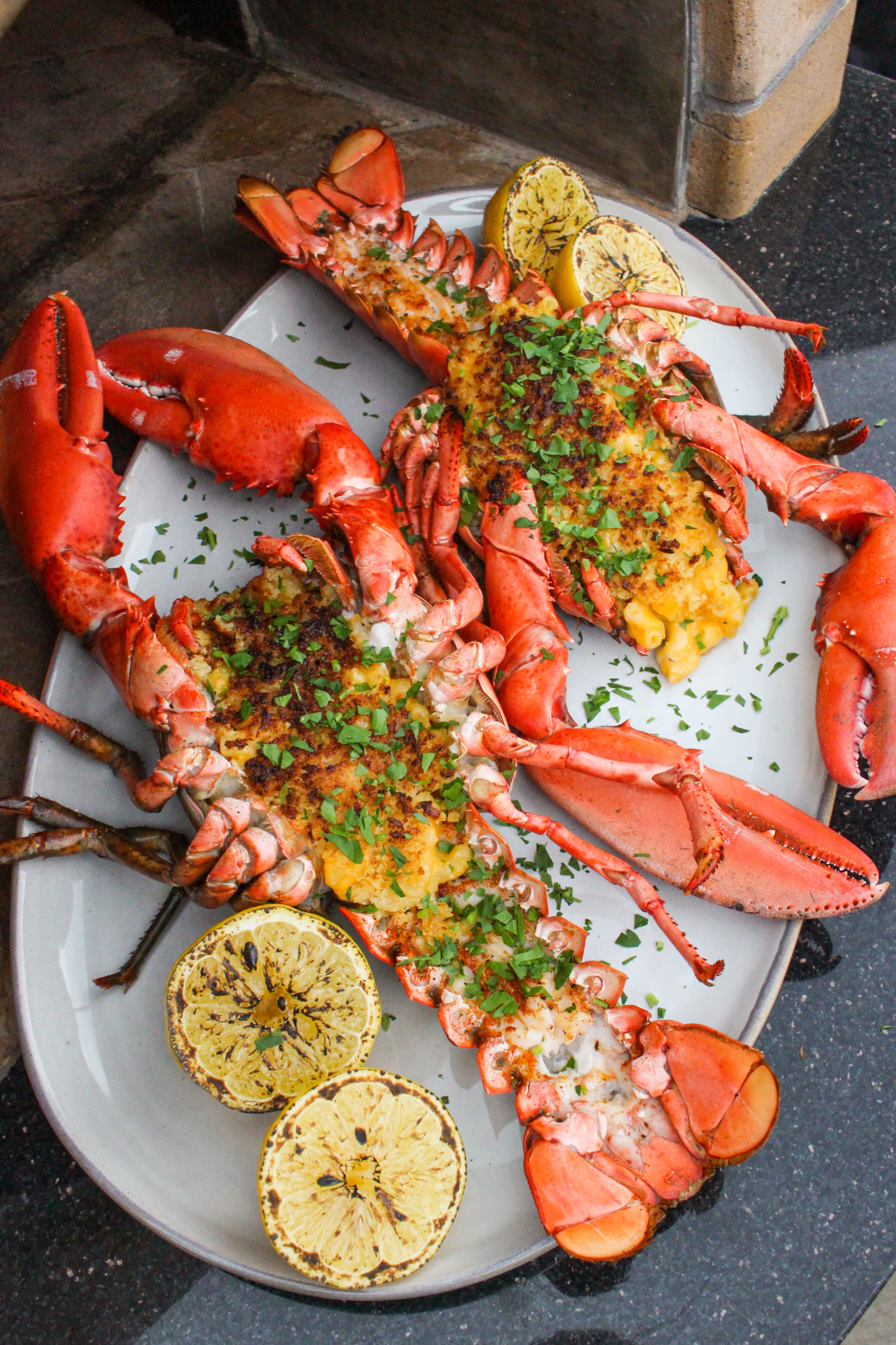 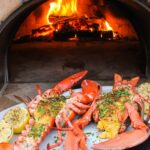