These Bacon Stuffed Lobster Tails tender, juicy, savory, flavorful, and delicious! They’re made up of butterflied lobster tails that are seasoned to perfection with my very own Chipotle Garlic Rub, and packed full of a creamy, slightly spicy mayo, bacon, and herb filling.

We’ll start today’s recipe with 4-6 lobster tails. Use a pair of kitchen shears to slice in the middle of the top of the lobster shell, then all the way down to the tail. Avoid cutting into the meat at all. We want that to remain intact!

Next, use a spoon to go underneath the top of the shell to separate the meat from the shell. Carefully lift the meat up and out of the shell, but leave it attached at the base of the tail. Lay the meat on top of the shell, then use a sharp knife to make shallow slits lengthwise down the meat. This increases the surface area of the meat so it absorbs more flavor and cooks more evenly!

Now, we season, because seasonings are the key to every recipe ever…and Bacon Stuffed Lobster Tails are no exception. I used my Chipotle Garlic Rub. Use whatever your favorite seafood seasoning is. You really can’t go wrong.

To season the lobster, first add some oil to a bowl. Mix in your favorite seafood seasoning, then whisk together until the mixture resembles wet sand. Next, use your hands to slather the lobster meat with the spice rub. Don’t be shy. Can you ever have too much flavor?

Lastly, arrange the prepped lobster tails in a cast-iron skillet or on a baking sheet.

Make the Bacon Stuffing for the Lobster Tails

One more thing before we get cooking… We need to make the bacon stuffing for the Bacon Stuffed Lobster Tails! This part is incredibly easy.

Now, set the stuffing aside until you’re ready to cook your Bacon Stuffed Lobster Tails.

Now, it’s time to cook your lobster! Do this in your pit, oven, or smoker. Anything works! I cooked in the pit.

To start, preheat your preferred cooking method to a medium-high temperature of around 400ºF. If desired, add wood chips or chunks to give the lobster some extra smoky flavor.

Next, add the lobster tails and cook on indirect heat for 3-4 minutes or until more than 50% of the shell on each lobster has changed color. Pull the lobster out and grab your bacon stuffing.

Add the now stuffed lobster tails back into the pit and cook for an additional 2-3 minutes or until the stuffing is starting to crisp slightly on the outside.

Finally, pull the lobster tails out of the pit, let them cool for a couple of minutes to give the meat time to soak in more flavor, then garnish with lemon and parsley. All that’s left to do is serve! 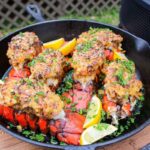