Brazilian Steaks with Habanero Chimichurri has me wishing for a trip to Brazil! This is a New York Strip roast that I trimmed and cut into three large steaks. While this may seem untraditional, this is actually a Brazilian technique that I’ve been wanting to try called Bife De Tira. I topped it all with a Habanero Chimichurri, so believe me when I say this recipe is fire.

I spend lots of time messing around with different flavor combinations and cooking techniques. It’s not often I find a new style of protein to cook, so I’m always excited when I do discover something new. I’d guess we’re all pretty familiar with a New York Strip steak, but I had never seen a roast cut like this before. Naturally, I wanted to give it a try.

So, what did I do differently for these Brazilian Steaks? Start by thinking of your classic NY Strip Steak. One end of the steak is slightly higher than the rest of the steak, while the opposite end is shorter with a small fat cap. The butchers take the roast and make vertical cuts across the chunk of meat to create these steaks. 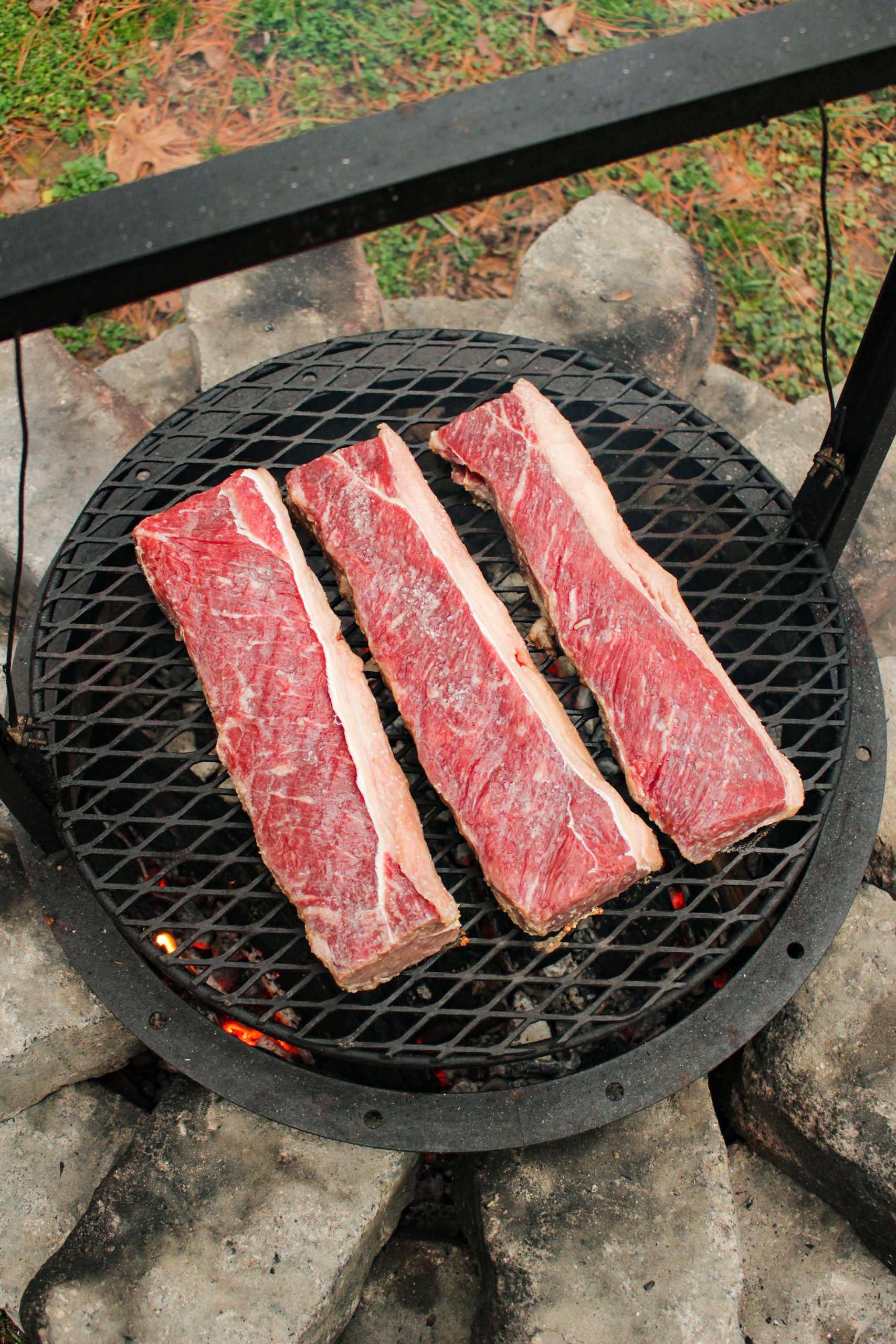 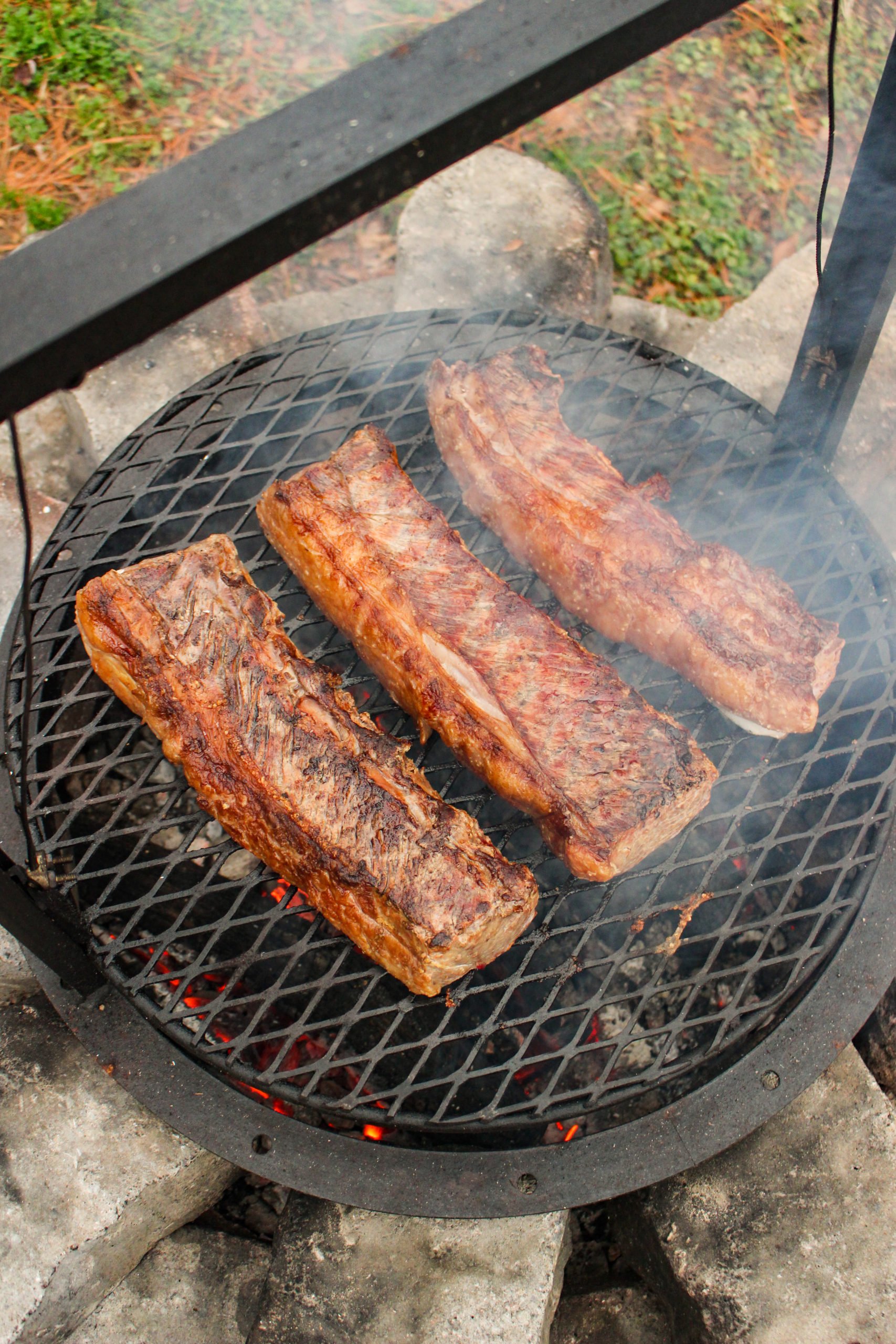 To start, I cut the high end and the low end of the steaks off. Next, I trimmed the other two sides to make an even looking block of meat. Then, where the butchers would typically make multiple, vertical cuts (creating a plethora of smaller steaks) I made two large, perpendicular cuts. This created three, long strips of steak.

From here, I oiled up the steaks and seasoned them with salt. We are going for Brazilian Steaks after all.

Habanero Chimichurri for our Brazilian Steaks

After seasoning the steaks, let’s get to work on the Habanero Chimichurri. It’s worth noting that I like to prepare this Habanero Chimichurri pretty early in the recipe cooking process. This is because it allows the flavors to sit and fuze together while everything else is cooking, making for the best chimichurri.

If you like to get ahead of the game, you can make the chimichurri a day early and let it sit all day to marinade together. Alternatively, if timing just isn’t working for you, you can definitely make the Habanero Chimichurri right before serving the dish. It will still be great. Really the takeaway message here is that whatever you do, make this chimichurri. It’s sharp and spicy and even a bit tangy. Top it on that savory Brazilian Steak and you’ll have a happy belly. 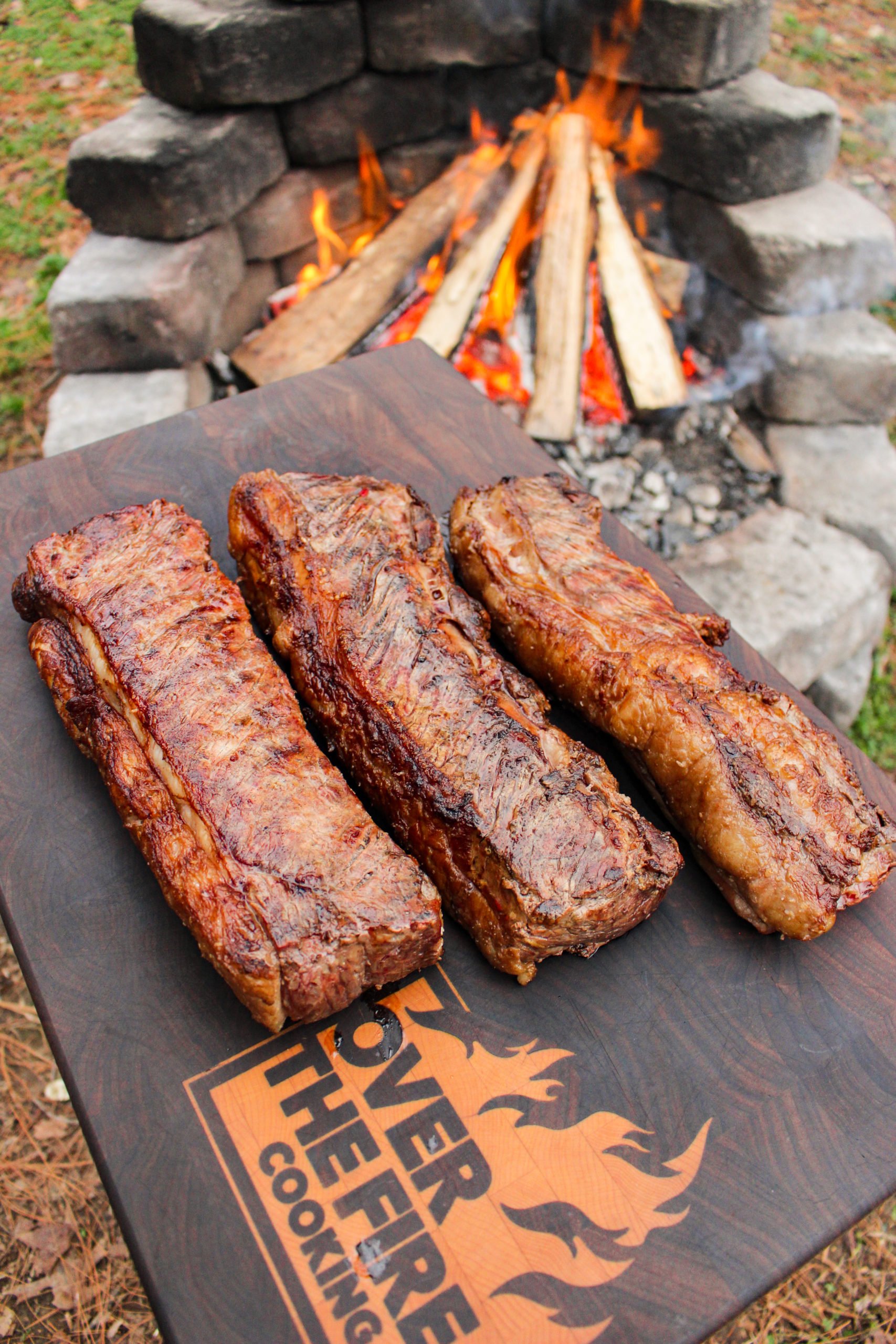 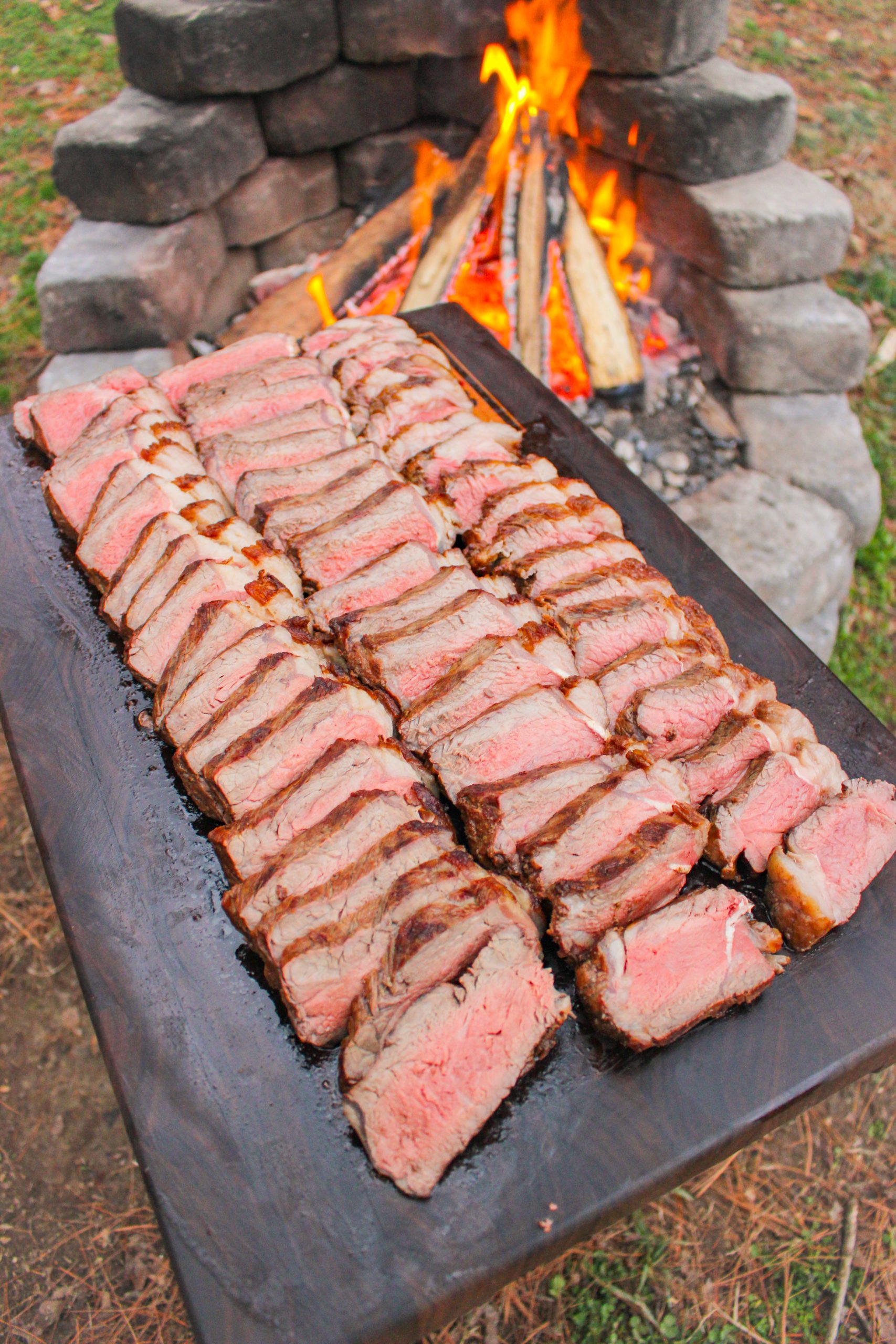 You might be wondering if these steaks will still be tender since I sliced them differently. The answer: yes!

While we cook these three long steaks over the fire, consider the way we’ll slice into them at the end. We will actually be slicing them against the grain and creating bite sized pieces. You know what else is great about these Brazilian Steaks? Due to this slicing technique, each bite sized sliver of steak will have its own fat cap. That means you’ll get some of that buttery, flavorful fat with each bite of steak. Pretty awesome right?!

A Dinner Fit for a Brazilian

Cook these Brazilian Steaks until they hit an internal temperature of 120F. Then, remove them from the grill and let them rest. 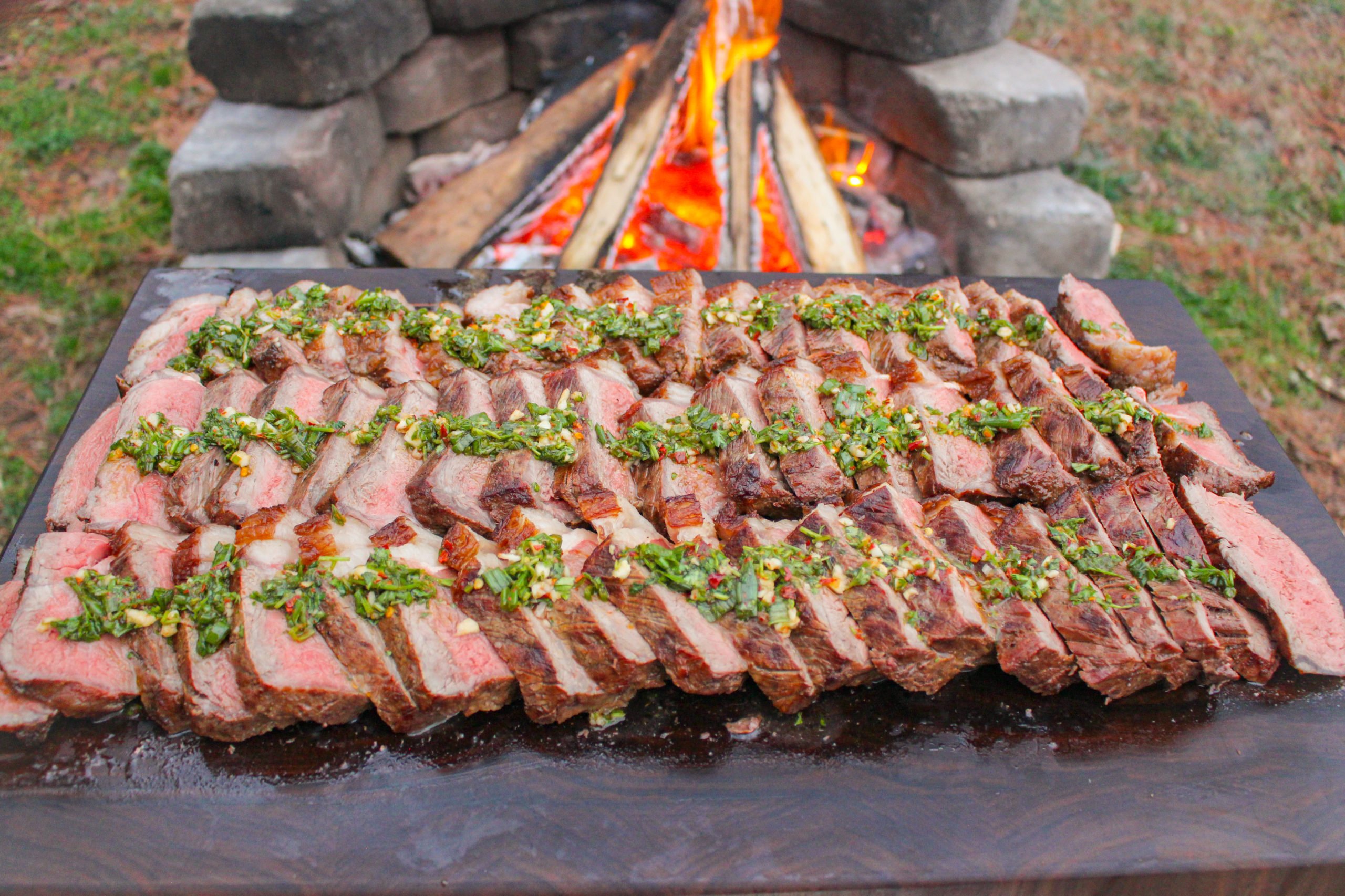 After they’ve rested, slice into the Brazilian Steaks and top with our Habanero Chimichurri. Then grab the nearest fork, or just use your hands, to get some steak and chow down. Best enjoyed with friends and family. Cheers! 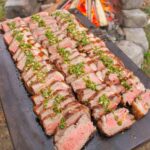