Hitting the best of both worlds today with this Grilled Surf and Turf Recipe. Lobster tails for the surf, two massive porterhouse steaks for the turf and the Buffalo Trace just for me! I did a reverse sear on the porterhouse steaks and topped them with an incredible horseradish parmesan butter sauce. I may have also dipped those lobster tails in the butter sauce because it was so delicious… More on that below.

Two birds, one stone. If you don’t get that reference, ask Alexa. If you do then you’ll appreciate the seasoning I made for this Grilled Surf and Turf recipe. It’s one seasoning blend that goes for both the steak and seafood. This multifunctional seasoning might sound impressive, but in reality it’s just four ingredients. Those ingredients are coarse sea salt, peppercorns, red chili flakes and dried minced garlic. I tossed all those ingredients into my mortar and pestle.

Why the mortar and pestle? Well, I did it mostly for the peppercorns. I love pepper on steak and fresh peppercorns bring the most flavor to the table. Using already ground pepper works fine if you want to save some time, but it won’t bring as much of that pepper flavor in comparison to freshly ground peppercorns. Season the steaks after the seasoning is ground together and at your desired level of consistency. Remember, we’ll use this seasoning blend on our lobster tails too, so don’t use it all up on the steaks. Alright, let’s keep moving through this Grilled Surf and Turf Recipe.

After seasoning the steaks I placed them on the grill. I used a reverse sear cooking technique for these steaks as they were such large cuts of beef. Reverse searing is one of my favorite ways to cook large steaks like these porterhouses. This is because it allows me to reach the proper internal temperature for the steak and then searing it. You get the perfect medium rare cook and a great crust on the steak. If you cook it directly over the coals from the get go, you risk the outside cooking too quickly while the inside of the steak remains raw. All in all, reverse sear is the way to go for this Grilled Surf and Turf Recipe.

While the turf was cooking, I prepped the surf. To do this, I cut down the center of each lobster tail and carefully pulled the lobster meat up to sit on top of the shell. From here, it’s easy. Sprinkle the top of each lobster tail with the remaining seasoning that we used for the steaks. Now, head back to the grill.

I cooked my porterhouse steaks until they reached an internal temperature of 120 degrees Fahrenheit. Then, I pulled them from the grill to let them rest. Things for our Grilled Surf and Turf escalate quickly from here… As soon as the steaks came off, the lobster tails went on.

Along with the lobster tails was the horseradish parmesan butter sauce. Don’t skip this part of the Grilled Surf and Turf Recipe because it’s amazing!! All you have to do is combine all the ingredients in a cast iron sauce bowl and let them simmer together. Alright, now we’ll sip on some Buffalo Trace and get ready for the final step. Searing the turf.

Loving this surf and turf combo? Check out our garlic butter steak and shrimp too!

Sip and Surf and Turf

As the lobsters finish cooking, grab the steaks and place them on the grill grate over the coals. Leave them here for a minute or two per side to get a nice crust. Then, pull everything from the grill. I served my Grilled Surf and Turf directly from my cutting board. I lined the top of the board with my lobster tails and placed the steaks right below them. Before cutting into the porterhouse steaks, I topped them both with a generous amount of the horseradish parmesan butter sauce. Then, I cut into the steaks and we were ready to eat. Best enjoyed with friends, family and a nice bourbon… like Buffalo Trace! Cheers! 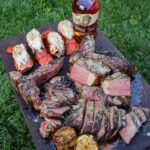